Because the orthopedic forces for conventional rapid max­illary expansion (RME) are transmitted to the skeletal structures through the anchorage teeth, they may produce such unwanted side effects as buccal tipping, fenestration of the buccal bone, root resorption, or gingival recessions, even in children.1-4 In adults, where resistance to expan­sion is much higher, osteo­tomies may be needed to facilitate expansion and reduce the load on the anchor teeth. The dental side effects are diminished in such cases, but are not eliminated.5,6

To overcome these drawbacks, mini-implants have been employed to share the expansion load with the anchorage teeth in mini-implant-assisted rapid palatal expansion (MARPE). In 2007, Wilmes and colleagues introduced the Hybrid Hyrax* expander, using two mini-implants in the anterior palatal T-Zone7-10 and two (deciduous) molars for anchorage.11-14 Similar hybrid devices for miniscrew-­assisted expansion (MSE) were developed by Garib,15 Lee,16 and Moon.17 In the Hybrid Hyrax approach, the temporary anchorage devices (TADs) are inserted before the appliance is installed. This method is known as “TADs first” or “bone first” because it prioritizes the selection of insertion sites with the most available bone.

An alternative is to insert the expansion appliance before the mini-implants (“appliance first” MSE).18 In this system, the prefabricated shape of the expander limits the potential locations for mini-implant placement. It may be possible to shift the expansion mechanisms forward or backward to align the channels with areas of good bone, but it is unlikely that all two to four mini-implants will be located in regions with the best bone quality. This problem is especially noticeable in the molar areas, where the bone height of paramedian sites is only 1-2mm.10,19 In addition, because the connection between the expander and the mini-implants is not rigid or angularly stable, the TADs have some play and may tip as soon as the expander is activated.20

Both types of mini-implant-supported expanders can also be used to successfully treat growing Class III patients,21-28 providing skeletal maxillary protraction without the common dental side effects.17,23,24,29 In children with more sutural maturation, alternate rapid maxillary expansion and constriction (Alt-RAMEC)28,30 over a nine-week period can enhance the response of the maxilla to the protraction forces.31-33

Mini-implants have a failure rate of only 1-5% in the anterior palate34,35 when inserted in the T-Zone,7-10 which provides good bone quality and minimal risk of injury to the nerves, vessels, or roots. Farther posteriorly, in the molar area paramedian to the suture, the bone availability is limited. Moreover, there is considerable variability among patients in terms of the bone thickness of the palate.36 Therefore, the MARPE appliance can be customized for each patient after careful evaluation of the palatal bone thickness, using cone-beam computed tomography (CBCT) to determine the ideal sites and inclinations for the mini-implants. One possible palatal insertion site for the posterior TADs is in the alveolar process between the first molar and second premolar.7,9,37 In this area, safe insertion without root damage is critical. The use of a mini-implant placement guide,38-40 akin to those used in the placement of dental implants, can facilitate risk-free insertion, thus allowing prefabrication of a pure boneborne expander with support from four mini-implants.

The present article describes the fabrication and clinical use of the Quadexpander.

To identify the optimal sites for mini-implant placement, first obtain a stereolithographic (STL) file of the maxillary model. Using Easy Driver** software, identify three common points between the surface mesh and a CBCT image, then match the cross-sections of the digital model and the CBCT to produce an accurate superimposition. The software allows virtual planning and place­ment of TADs in a variety of lengths and diameters, according to the anatomical variations of each patient. Position the paramedian anterior TADs (usually 9mm in length and 2mm or 2.3mm in diameter) within the T-Zone. The posterior TADs (7mm or 9mm in length and 2mm or 2.3mm in diameter) can be inserted between the roots of the second premolars and first molars. The three-dimensional orientation of the CBCT ensures adequate space between the roots in an area of good bone quality.

The planned mini-implant positions are indicated by laboratory implant analogs, which are either inserted manually in the marked locations on a 3D-printed model or transferred to a plaster cast in the laboratory. Fabricate the Quadexpander on this model using a preformed jackscrew*** with an expansion capacity of 10mm. Weld the jackscrew to four preformed rings† on the laboratory analogs while bending the expansion arms to adapt them to the shape of the palate.

Digitally design the insertion guide around the mini-implant positions, and fabricate it from a biocompatible resin‡ in a 3D printer.†† Removable cylindrical sleeves are used to ensure precise coupling with the mini-implant driver for accurate insertion. At the chair, insert the selected mini-implants with an inner thread† through the placement guide using a contra-angle screwdriver. At the same appointment, attach the prefabricated Quadexpander to the four mini-implants with four fixation screws.†

A 17-year-old male patient presented with a transverse maxillary deficiency (Fig. 1). Because of the relatively mature age of the patient for toothborne palatal expansion, a purely boneborne expansion appliance, the Quadexpander, was chosen.

Using the procedure described above, a CBCT was superimposed on the digital model (Fig. 2). 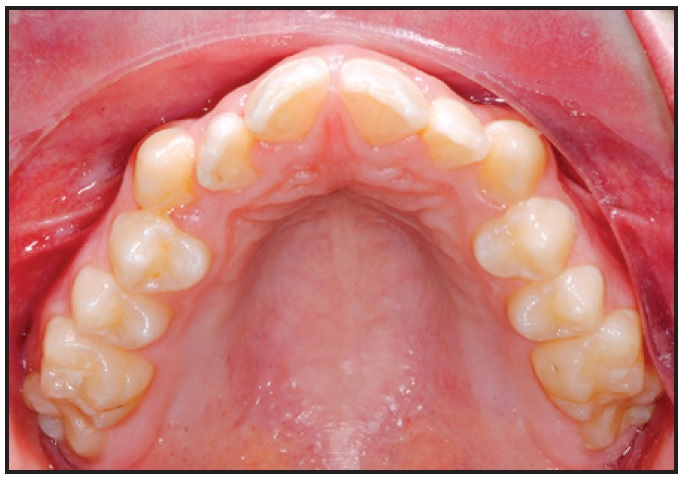 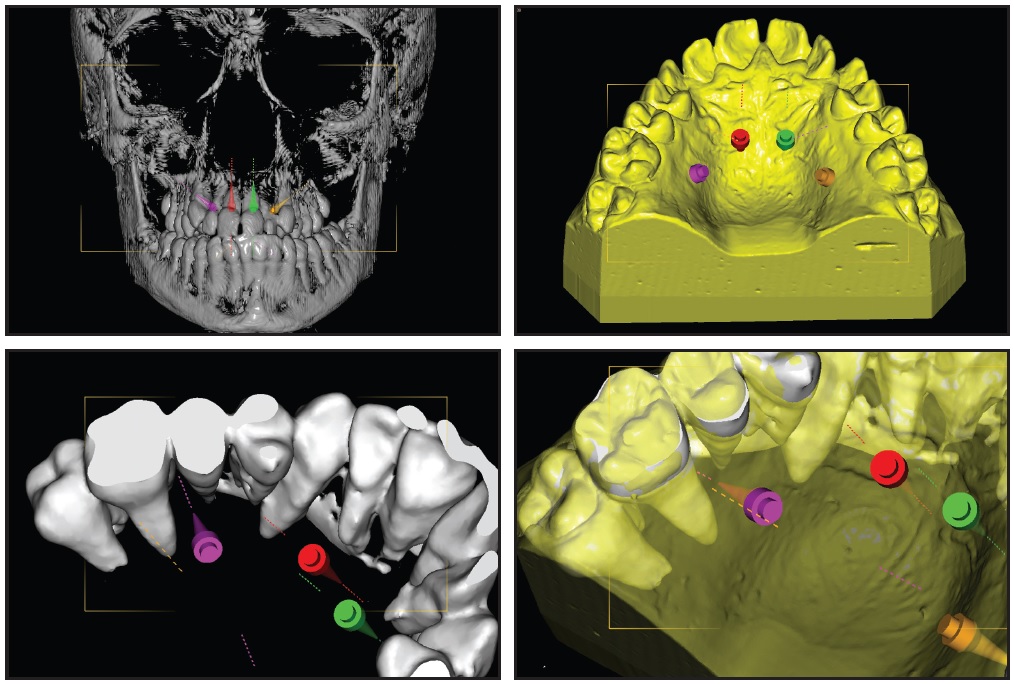 Analysis of the CBCT image indicated sufficient bone for two 9mm × 2mm mini-implants† in the anterior palate lateral to the suture. Because the posterior paramedian bone was insufficient for skeletal anchorage, we decided to place two 7mm × 2mm mini-implants in the alveolar ridge between the roots of the second premolars and first molars. After overlaying the virtual model and the CBCT, the positions of the anterior and posterior mini-implants were digitally planned. The insertion guides were digitally produced (Fig. 3), and the mini-implants and Quadexpander were inserted at the same appoint­ment (Fig. 4A,B). 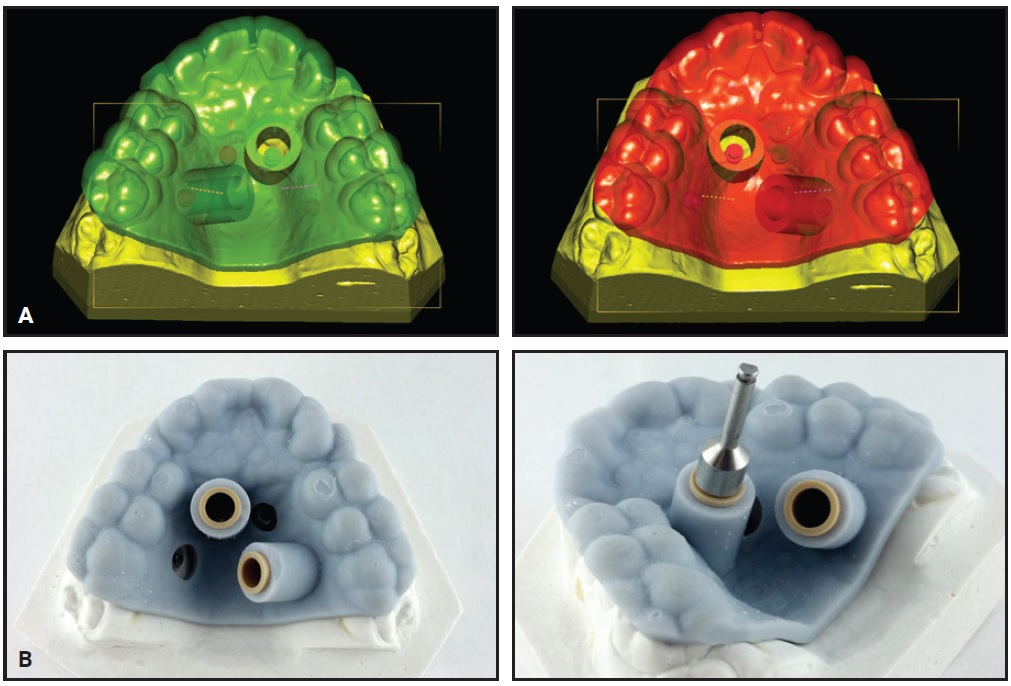 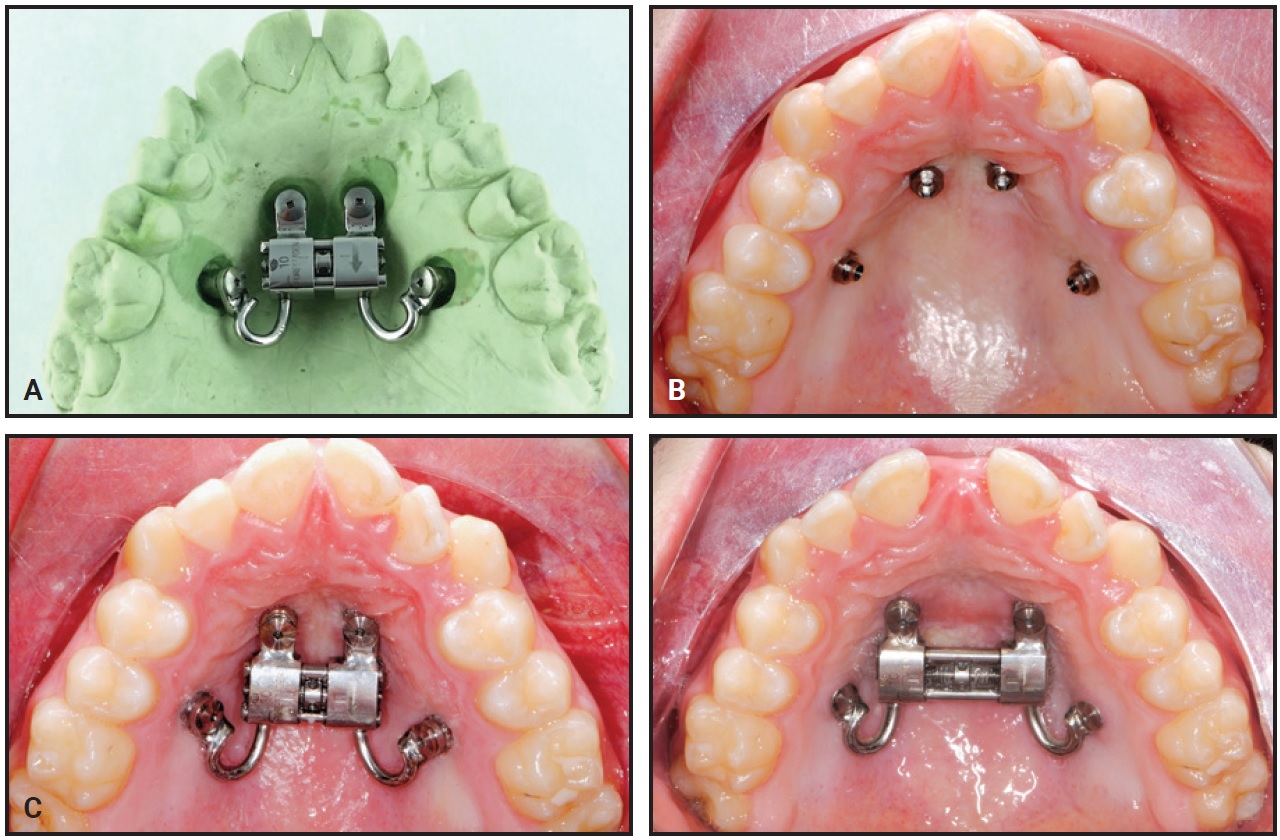 Fig. 4 Case 1. A. Quadexpander on model. B. Insertion of TADs. C. Before and after 30 days of expansion.

The patient was instructed to turn the expander .2mm per day, resulting in about 6.5mm of boneborne expansion after 30 days (Fig. 4C).

A 17-year-old female patient presented with a narrow maxilla (Fig. 5). We chose a Quadexpander with two 9mm × 2mm anterior paramedian screws and two 9mm × 2mm posterior screws between the second premolars and first molars to perform MARPE without surgery (Figs. 6,7). 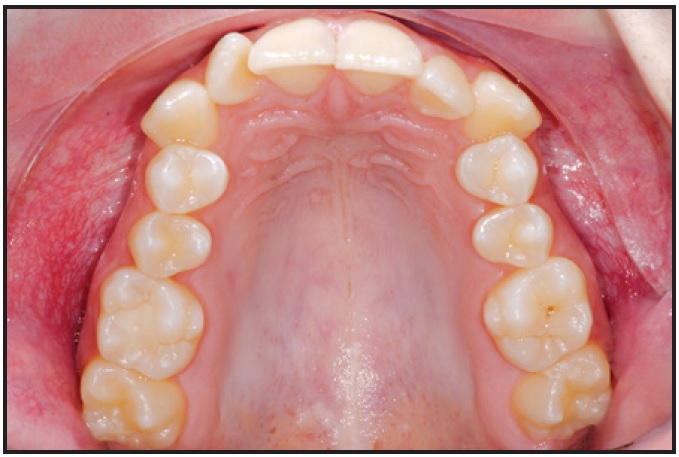 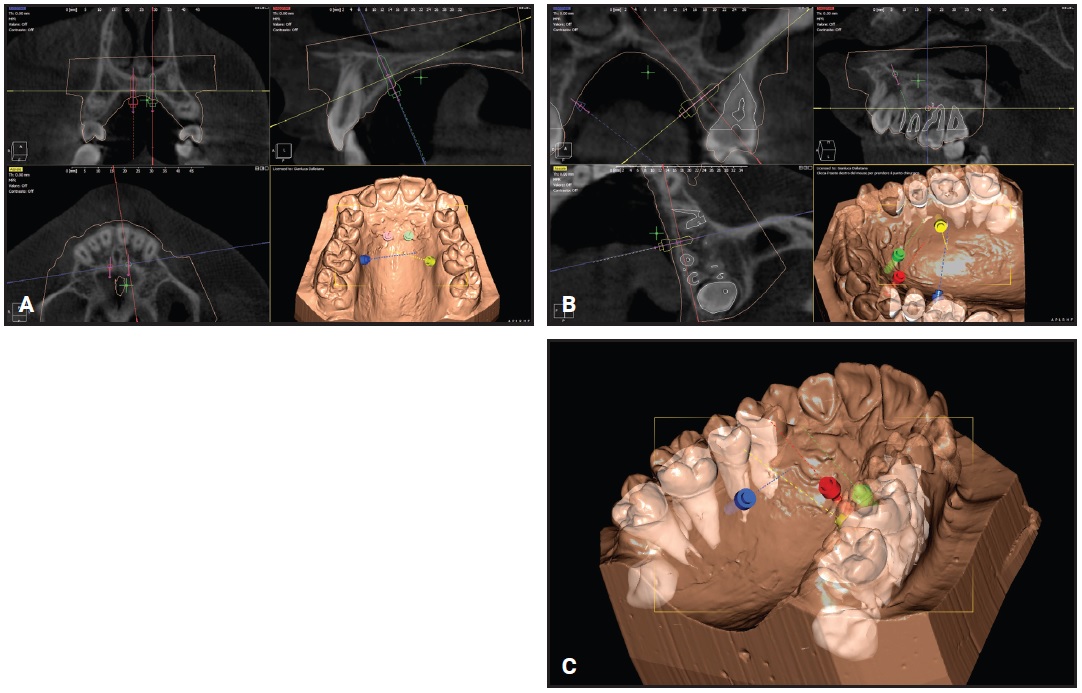 The patient was instructed to turn the expander .2mm per day. Five days after the initial activation, two additional 90° turns were performed to assess the mobility of the maxillary halves. After 27 days, about 6mm of expansion had been achieved (Fig. 8). The expander was left passively in place for 10 months to maintain the expansion during orthodontic treatment with a fixed appliance.

The advent of mini-implants has enabled nonsurgical expansion in older teenagers and adults, reducing the need for surgically assisted rapid palatal expansion (SARPE).41 The Quad­expander uses four mini-implants: two anterior screws in the T-Zone of the anterior palate and two posterior screws in a site with maximum bone availability. Although MSE screws are typically placed in the paramedian areas of the posterior palate,42,43 we do not recommend this insertion area because of its thin cortical bone support. With an MSE appliance, it is difficult to determine how much of the load is borne by the posterior mini-­implants and how much is transmitted to the molars. The Quadexpander eliminates that problem because it is purely boneborne, and thus ideally suited for combining with aligners.

While CBCT studies have indicated that there is usually enough space between the second pre­molars and first molars on the palatal side for mini-implant placement,44 this insertion can be clinically difficult in patients with narrow maxillary arches, crowding, or impacted second pre­molars. In addition, the mini-implants will bear the force load not only during the expansion phase, but also during the retention period, which is likely to be several months long in an adult. Therefore, we advise the use of an insertion guide to avoid root contact or injury, a frequent cause of mini-­implant failure.45 The preoperative planning process provides valuable insight into the bone quality and anatomical variations of potential placement sites, allowing the clinician to focus more on tissue handling and patient management during the insertion procedure.

Surgical guides are now widely used in the placement of prosthetic dental implants.46 Most of these use specifically designed implant placement kits that couple precisely with the drill and placement guides.47 Such guides have not been available with orthodontic mini-implant kits, although there have been several attempts to use prebent wire guides in combination with conventional mini-­­implant placement tools. The Easy Driver system now provides a mini-implant placement kit specifically designed to fit the placement guide with little tolerance, thus allowing more precise mini-­implant insertion. The use of a CBCT in digital planning allows the clinician to select the area with the best available bone, as well as an implant that engages both the palatal cortical plate and the floor of the nose, facilitating bicortical engagement and further enhancing the primary stability48 and success of the TADs. Moreover, a precise placement guide enables safe insertion of TADs in the presence of palatally impacted canines or unerupted teeth, as are sometimes found in older teenagers and young adults. Using an insertion guide to place the mini-implants between the second premolars and first molars will not only prevent root injury, but also improve the success rate by ensuring a safe distance between the TADs and the roots of adjacent teeth. The diameter of the screws can then be varied as well.

Selective laser melting procedures have recently been adopted for manufacturing metal expanders.49,50 The available metal printing powders provide sufficient rigidity for appliances like the Quadexpander. This device is safe and easy to insert, even by orthodontists without much experience who might otherwise refer their patients to oral surgeons for mini-implant placement. Insertion can be completed in one appointment, saving significant chairtime. The digital insertion guide allows considerable flexibility in selecting TAD locations, ensuring that all four mini-implants are placed in the best quality bone. In contrast, an MSE appliance42,43 must follow the outline of the prefabricated expansion screw, which may place one or more screws in areas of poor bone quality. The Quadexpander can be used in adolescents and adults, as well as in patients with missing teeth. It is even possible to use the four-mini-implant expander in conjunction with SARPE—especially in a periodontally compromised patient or in an older adult in whom expansion is unsuccessful—by performing a minimally invasive bilateral corticotomy. Because the appliance does not involve any teeth, orthodontic movement can be started independent of the expansion and the subsequent retention period. The mini-implants can also be used as anchorage for more than one appliance—for example, in molar distalization after the RME.51

Disadvantages of the Quadexpander include the need for additional radiation exposure from a CBCT to manufacture the insertion guides, although this can be justified in cases where such expansion is required. 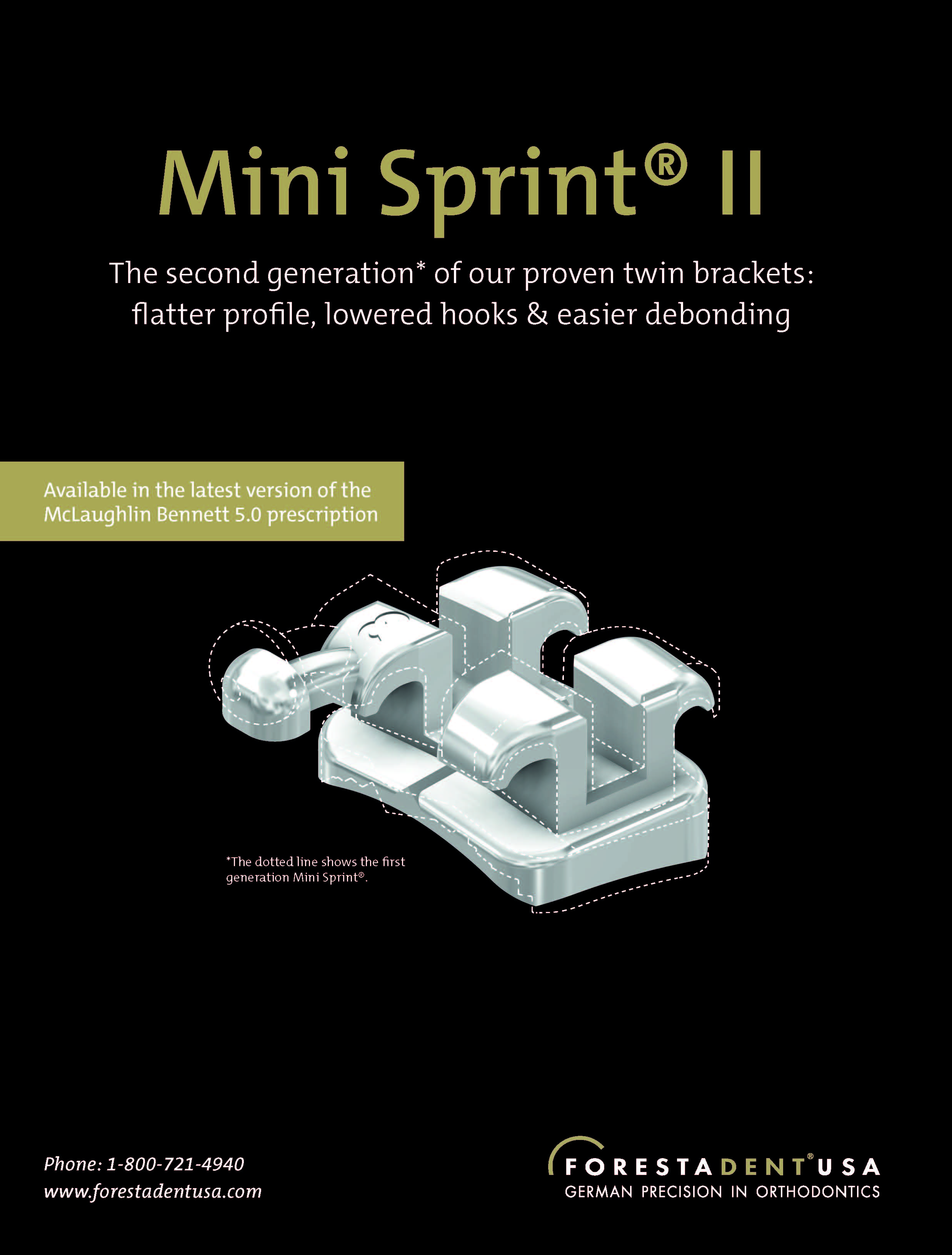 Fig. 4 Case 1. A. Quadexpander on model. B. Insertion of TADs. C. Before and after 30 days of expansion. 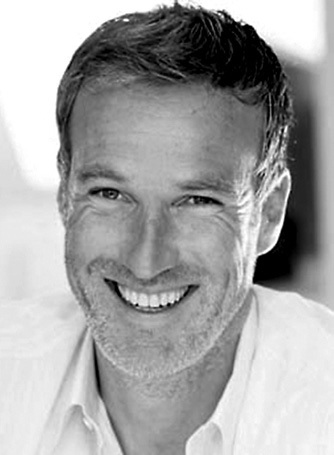 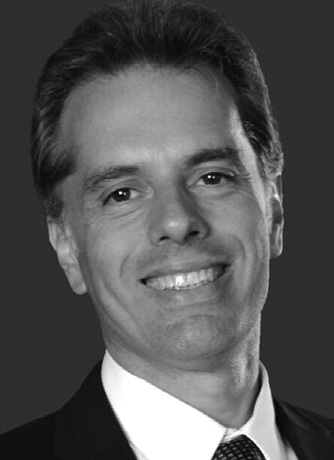 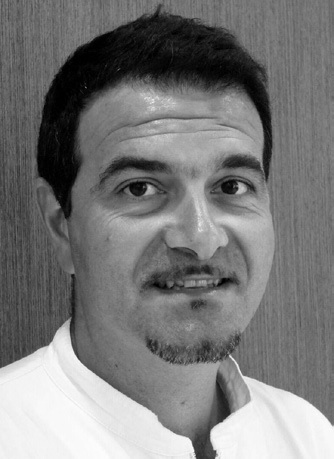 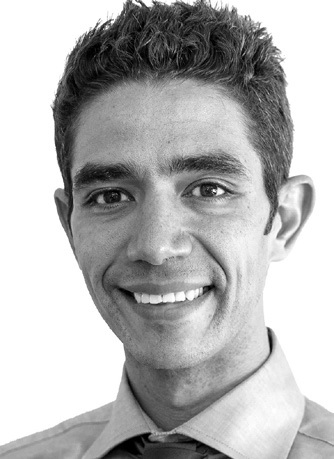 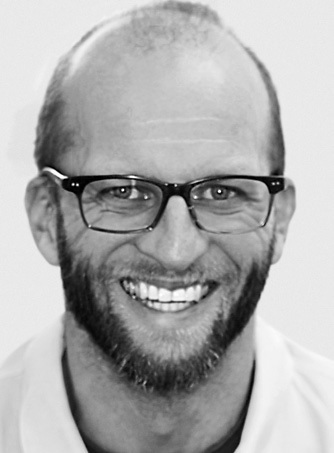