Rapid maxillary expansion is commonly employed in the management of maxillary transverse deficiency, a highly prevalent malocclusion in all age groups.1,2 Regardless of the specific appliance or expansion rate selected, the aim of conventional rapid palatal expansion in the primary or mixed dentition is to exert a transverse force from the anchorage teeth to the midpalatal suture. Disarticulating the suture leads to bone remodeling as a result of the increased cellular activity.1-6

Traditional anchorage exerts heavy loads on permanent teeth, potentially causing such adverse effects as exostosis, pulpolitis,7 periodontal damage,8 or external root resorption.9,10 While the upper second deciduous molars can be used to anchor expansion in mixed-dentition patients,11 the first molars and premolars must still be used in older patients. Indeed, about 30% of the adults seeking orthodontic treatment present with transverse maxillary deficiency related to a posterior crossbite.12,13 Surgically assisted rapid palatal expansion (SARPE) has been considered the safest and most reliable approach in adult patients to overcome the resistance of the bony palate and zygomatic buttress and to minimize unwanted side effects.14

The introduction of skeletal anchorage has opened new possibilities in orthodontics, including treatment of maxillary transverse deficiency. The miniscrew-assisted rapid palatal expander (MARPE) has proved effective and stable for maxillary widening in adult patients.15-18 A boneborne MARPE is anchored exclusively on palatal bone, while a hybrid MARPE utilizes both bone and teeth (usually the first molars). When a hybrid MARPE is used, much of the force load is transferred to the anchor teeth, with a consequent risk of labial tipping.19,20 The boneborne MARPE, without any connection to the teeth, provides a pure orthopedic force for shifting teeth in a vestibular direction—an essential factor in preventing relapse.15,21-24

Bicortical anchorage has been recommended to meet the heavy anchorage needs of a boneborne MARPE.25,26 This insertion method provides better stability of the temporary anchorage devices (TADs), avoids TAD deformation and fracture, promotes more parallel expansion in the coronal plane, and increases the potential amount of palatal expansion.27,28

Another important element in preventing relapse of maxillary transverse expansion is the design of the rapid palatal expander (RPE). The most popular fixed RPEs with central jackscrews are the Haas appliance, a tissue-borne device with acrylic pads contacting the palate, and the Hyrax,* an entirely toothborne metal framework that stands away from the palate.29 The Hyrax version is popular because it is easy to clean and fabricate and interferes minimally with speech,30 but it does not provide the tissue-borne device’s orthopedic component of force for control of molar crown tipping.31-34

The HIMAME is unique in that it uses metal pads to cover the palate, rather than acrylic pads as in the traditional Haas RPE design (Fig. 1). The metal pads, which are an average 1.5mm thick, extend from the mesial of the second premolars to the distal of the first molars (3mm from the gingival margin in this example). The wide extension and posterior position on the palatal slopes were designed to apply lateral forces against the pterygo­maxillary buttress—a major source of resistance to maxillary expansion.35,36 A 10mm jackscrew** is soldered at the junction of the metal pads.

The HIMAME is connected to the maxilla with four TADs inserted into the cortical bone of the palate and nasal floor. The four insertion slots are placed 1mm from the central slot between the metal pads, 2mm mesial and distal to the jackscrew. 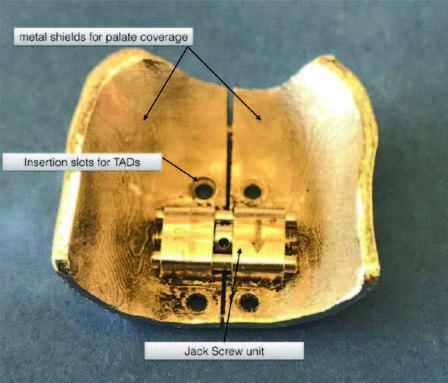 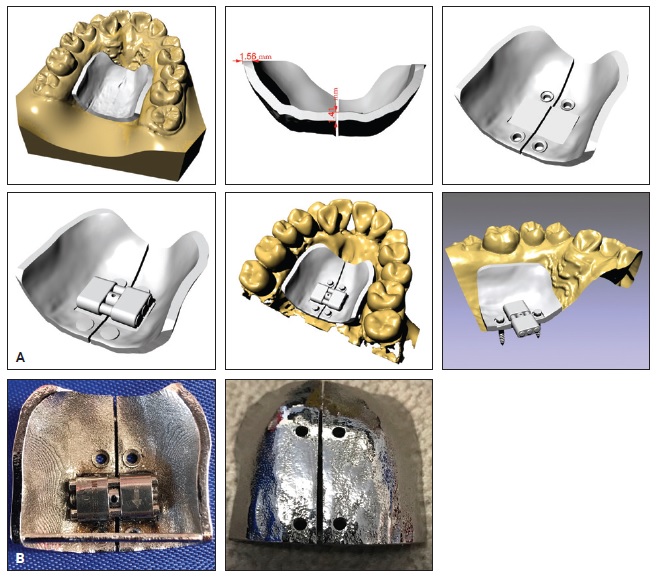 We create digital impressions of the maxillary and mandibular arches with a CS 3600*** digital intraoral scanner. The stereolithographic (STL) files and cone-beam computed tomography (CBCT) files are then sent to a digital lab,† where the three-dimensional model is matched with the CBCT to design the metal pads and TAD insertion slots. The specific slot locations are individually calibrated for the selected miniscrew implants to ensure precise insertion perpendicular to the basal bone, without the need for a surgical placement guide.

The HIMAME is delivered in an acrylic transfer tray‡ to facilitate placement in the correct position (Fig. 3). The appliance can be inserted into the palatal bone and activated in a single appointment. 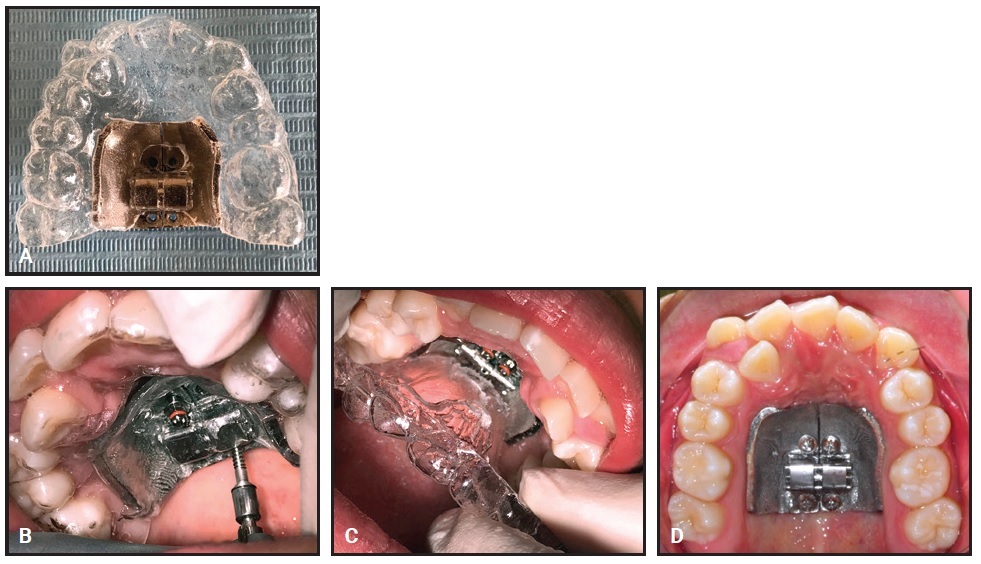 A 17-year-old female was referred by her dentist with “crooked teeth” (Fig. 4). 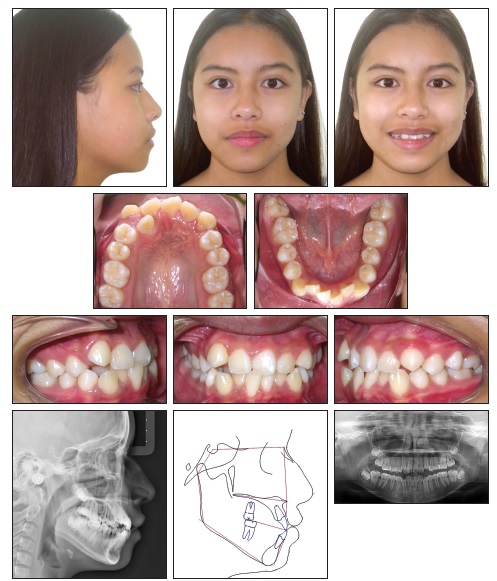 Clinical examination showed an oval face with a biprotrusive profile, a mandibular shift to the right, and competent lips. The patient had a Class I canine relationship on the right side, with the upper canine out of occlusion, and Class II molar and canine relationships on the left. A severe upper dental midline shift to the right, a constricted upper arch, and severe crowding in both arches were also observed. The upper right lateral incisor and upper left central and lateral incisors were in crossbite. A 21mm upper arch-width discrepancy was measured between the distal aspects of the second molars.

Treatment goals were to achieve Class I molar and canine relationships, widen the maxillary arch, correct the dental midlines, create proper overjet and overbite, and align both arches, all without negatively affecting facial esthetics.

Some evidence indicates that basal bone can be widened even in patients who have finished skeletal maturation.37 Although our patient’s skeletal discrepancy could have been treated with a conventional RPE anchored to the upper first molars and premolars, we decided against that option to avoid side effects on the anchor teeth.7,9,10 SARPE was rejected because of its invasiveness, surgical risks, and cost.38 Since MARPE has been shown to be effective and reliable in the treatment of young adults, we proposed this option and obtained informed consent from the patient and her family.15,17,18 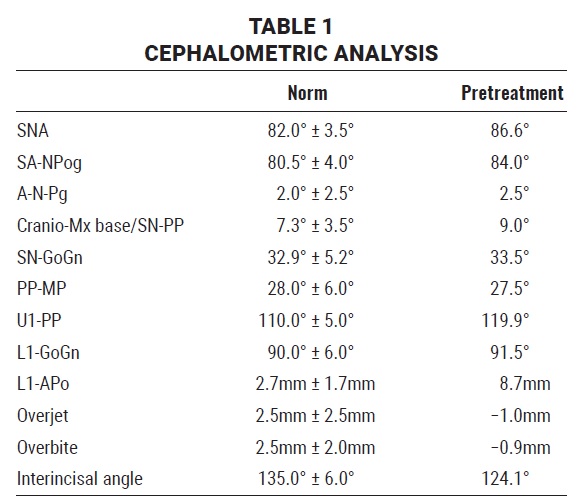 We selected four bicortical miniscrews†† with a diameter of 2mm, an intraosseous length of 10mm, a neck length of 3mm, and a total length of 15.8mm. The TADs were inserted into the palatal bone 1.5mm paramedian to the midpalatal suture, an area considered ideal for miniscrew placement.39-41

The patient was instructed to follow a strict oral-hygiene protocol involving a daily .12% chlorhexidine mouthrinse. Activation of the expander required two turns per day (one in the morning and one in the evening) for 12 days. The patient reported discomfort in the palatal vault and nose cavity and some difficulty in swallowing on the first day after HIMAME insertion and activation, but these effects had lessened by the second day.

Activation was discontinued after 6mm of expansion (Fig. 5). 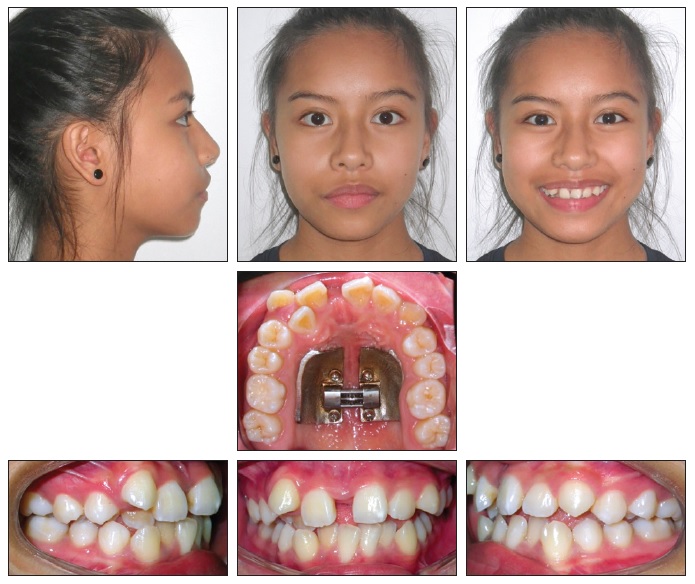 The metal pads appeared to be slightly embedded on the left side of the palatal mucosa, but no signs or symptoms of inflammation were noted.

One week later, a progress CBCT confirmed 7.52mm of widening in the anterior part of the suture and 4.16mm in the posterior part (Fig. 6). 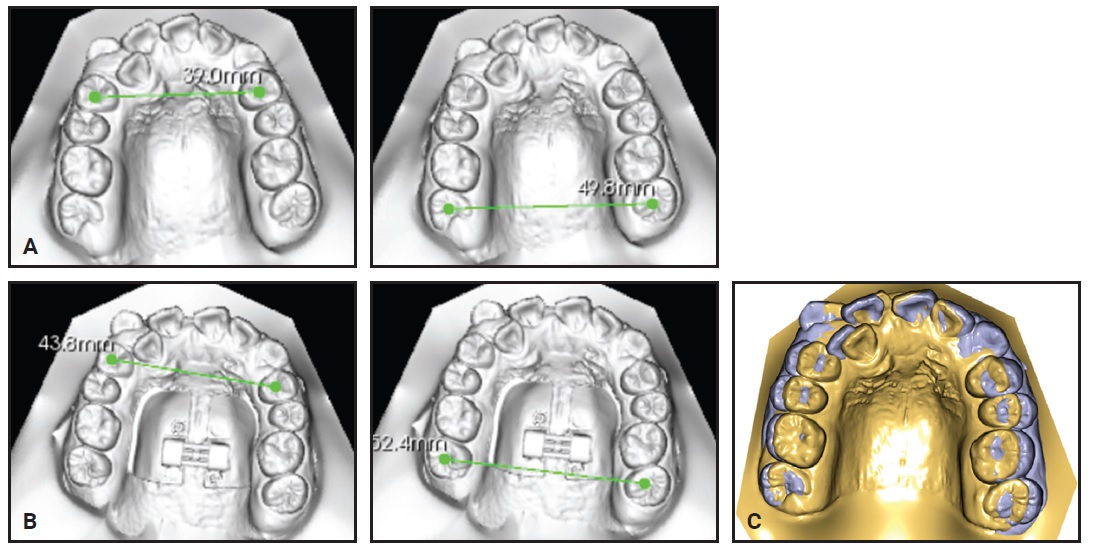 No change in first-molar inclination was detected (Fig. 8).

According to our protocol, the HIMAME was to remain anchored in the palatal bone for 10 months after the end of active expansion. Conventional orthodontic treatment involving four first-premolar extractions and fixed appliances was planned.

Traditional RPE is generally considered less efficient and reliable in non-growing patients because of a greater resistance against the mechanical forces applied to the cranial sutures.1,42-44 Many studies have found MARPE to be a safe and reliable alternative,5,16-18 although some tipping of the anchor teeth may occur when a hybrid version is used.1,24

Fig. 8 Maxillary width and angulation of first molars. A. Before treatment. B. One week after expansion.

Only a few tissue- and boneborne MARPE appliances have been proposed. These have used either two or four TADs, which are inserted along the palatal slopes, between the roots of the upper first and second premolars or the second premolars and first molars, and secured to acrylic pads with light-cured composite.32,45 The unique HIMAME provides several advantages over such designs:

• Using both tissue and bone for anchorage helps avoid undesirable dental side effects.

• The stiffness of the metal pads increases the appliance’s rigidity even with minimal thickness (only 1.5mm), compared with traditional acrylic designs. Moreover, because the pads retain a residual force load after activation has ceased, they contribute to further favorable skeletal changes during retention.46

• The pads are digitally customized so the sides fit the palatal vault anatomy, keeping food and other debris from becoming trapped and thus avoiding the inflammation usually seen with a Haas RPE.29

• Fabrication requires only x-rays and conventional or digital impressions. No expensive or complicated transfer guide is needed, because the calibrated insertion slots enable precise TAD insertion in the selected palatal sites. Once the screws are tightened, there are no gaps between the TADs and metal pads, ensuring a secure, stable connection without compression of the mucosa. No composite is required for attachment.

• The appliance’s location in the posterior part of the palate allows the separation force to be distributed along the entire length of the midpalatal suture, promoting a more parallel separation of the suture in an anteroposterior direction.1,32 The posterior positioning of the TADs helps overcome the skeletal resistance to expansion exerted primarily from the nasomaxillary, zygomaticomaxillary, and pterygo­maxillary buttresses.47-49 Bicortical anchorage provides maximum stability of the TADs, which is essential when heavy forces are applied.25,36

While a traditional RPE can also expand the maxilla in a 17-year-old patient,37 the MARPE’s avoidance of stress on the anchor teeth5,7-9 makes it a more reliable choice for treatment of young adults.5,16-18,26 Further studies should be conducted with the HIMAME design to evaluate the effectiveness of this approach across a variety of patient demographics and to investigate its effect on the airway and other cranial structures.

Dr. Lupini is in the private practice of orthodontics at via Monte Zebio 1/A, 64021 Giulianova, Italy; e-mail: danielalupini@gmail. Dr. Retrouvey is the Chair, Department of Orthodontics, University of Missouri-Kansas City, Kansas City, MO. Mr. Decesari is an orthodontic technician in Bergamo, Italy. Dr. Cozzani is the Chair, Istituto Giuseppe Cozzani, La Spezia, Italy, and a Contributing Editor of the Journal of Clinical Orthodontics.

Fig. 8 Maxillary width and angulation of first molars. A. Before treatment. B. One week after expansion. 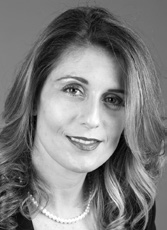 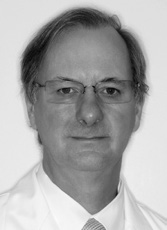 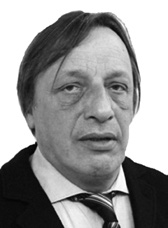 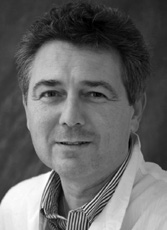