The Effect of Vibration on Molar Distalization

Interest in vibration as a method of stimulating orthodontic tooth movement spans more than three decades. In 1979, Shapiro and colleagues published a report describing the use of pulsating piezoelectricity to stimulate movement in a single subject.1 Krishtab and colleagues reported a 150-200% increased rate of tooth movement with the application of vibration (50Hz for 60-360 seconds) every two to three days.2

At the University of Texas Health Science Center at Houston, a pilot clinical trial of 14 patients using vibration at a frequency of 30Hz and a force of .25N for 20 minutes per day found an increased rate of tooth movement of 2.1mm per month in the mandibular arch and 3mm per month in the maxillary arch.9 A follow-up randomized controlled trial demonstrated a statistically significant increased rate of both dental alignment and canine retraction.10 In addition, a retrospective investigation reported a statistically significant 30% increase in the rate of leveling with vibration applied for an average 17 days per month.11 In contrast, a study in the United Kingdom reported no increase in the rate of alignment supplemented by vibration, but did not measure patient compliance with the device.12

Although vibration is typically seen as an adjunct to tooth movement in general rather than molar movement in particular, the present investigation was designed to determine whether it can enhance the effect of upper-molar distalization -- a common strategy in the orthodontic correction of Class II malocclusions. Of the bewildering array of techniques and "distalizing" devices developed for this purpose,13-37 one of the most common was selected for study.

Sixty-five consecutive adolescent Class II patients, all planned for upper-molar distalization, were divided into vibration (V) and control (C) groups. Of the initial 34 patients in the V sample, one declined to participate, one transferred, and two withdrew, leaving 30 patients who were treated consecutively. The C sample began with 31 patients, but one was lost when the treatment plan was changed to extraction. The 30 patients in the C group began treatment consecutively after the 30 in the V group had started.

Each of the final 60 patients had at least a unilateral half-to-full-step Class II molar relationship with mild-to-moderate crowding (Table 1). 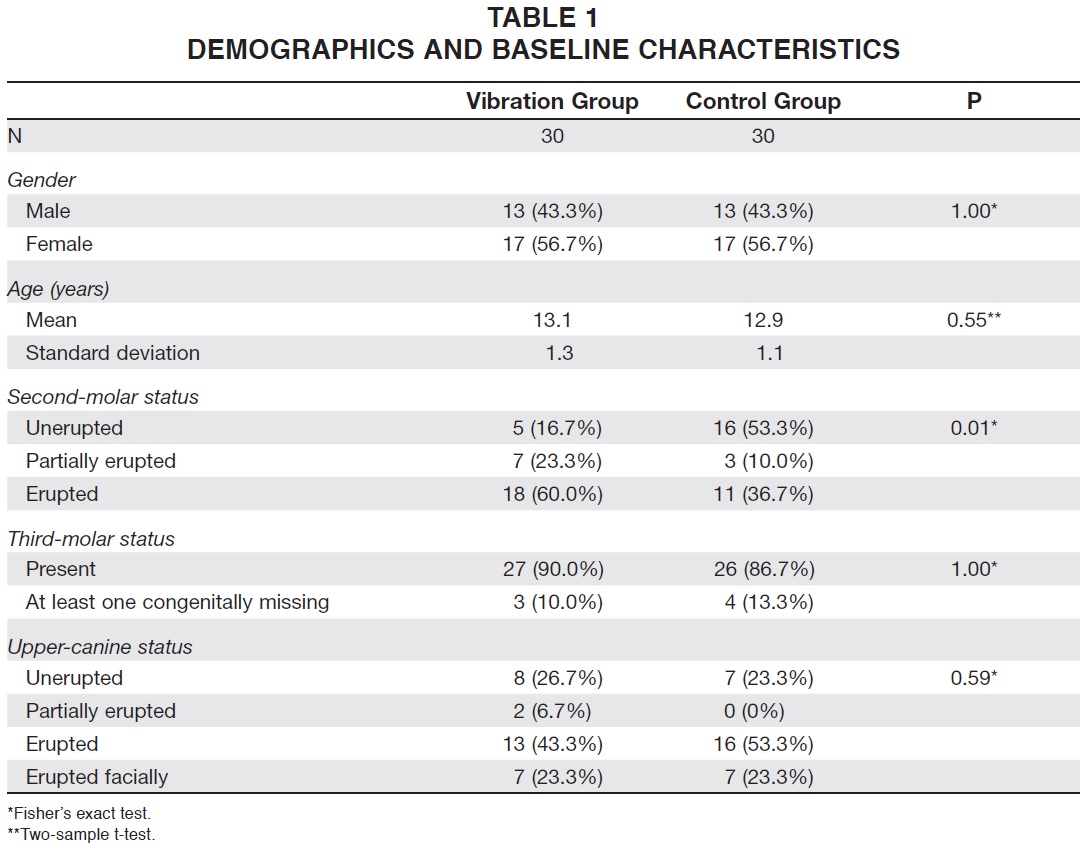 The two groups showed the same distribution of males and females of nearly identical ages, with similar percentages of erupted upper canines and missing third molars. There were more patients at the outset with partially or completely erupted upper second molars in the V group (25) compared to the C group (14). Fisher's exact test and two-sample t-tests were used to evaluate the demographic data.

Each of the 30 consecutive patients in the V group was provided with an AcceleDent* device (frequency of 30Hz, force of .25N), with directions to hold the mouthpiece between the teeth for 20 minutes per day throughout orthodontic treatment (Fig. 1A). The AcceleDent charging base recorded the number of daily uses during each 30-day interval of treatment (Fig. 1B); these patients were instructed to bring the devices to their appointments every four weeks so that compliance data could be gathered. On average, the device was used about 17 days per month over the 200 days typically required to complete distalization in the V group.

Fig. 1 AcceleDent* device consists of vibrational unit with attached mouthpiece (A) and charging/data-recording station (B). (Note: design has been changed since this study was conducted.)

Every patient in both groups underwent non-extraction treatment with a miniscrew-supported upper-molar-distalization device (Horseshoe Jet**).38 We used a method that has been consistently prescribed, with or without mini-implants, to more than 800 patients in the same private practice for 18 years, thereby reducing the potential for proficiency and selection biases. In this study, a total of 120 miniscrew implants (6mm x 1.5mm) were inserted in the palatal alveoli between the upper first molars and second premolars. The failure rate was 8%; of the 10 miniscrews lost during distalization, six were in the V group and four in the C group, corroborating reports that vibration appears not to impact miniscrew failure rates.10,39 The 240g open-coil springs of the Horseshoe Jet were recompressed in the same manner for each patient every four weeks. Consequently, the distalization process was completely independent of patient compliance.

Each patient's mandibular arch was bonded with preadjusted .022" brackets (Butterfly System***) to initiate leveling and alignment during the time of the investigation. Of a total 720 brackets, four were lost in the V group and two in the C group -- less than a 1% failure rate. The total number of missed appointments during the experimental period was 16, representing 4% of approximately 420 appointments.

A digital lateral cephalogram was taken for each patient immediately after insertion of the two miniscrews and delivery of the Horseshoe Jet. A progress cephalogram was taken at the completion of upper first-molar distalization, as determined by clinical observation (the mesiobuccal cusp of the upper first molar occluding distal to the buccal groove of the lower first molar, in a so-called "super-Class I").

All cephalograms were digitally enhanced for optimum hard-tissue analysis and printed at a 1:1 ratio. Each pretreatment and post-treatment pair was hand-traced in a single sitting by an operator with more than 50 years of experience who was blinded to the sample allocation. Maxillary regional superimposition was based on Bjork's putatively stable structural landmarks. Upper-molar anteroposterior movement was measured parallel to an average pre- and post-treatment functional occlusal plane and perpendicular to pterygoid vertical (Fig. 2A-C). Vertical movement of the crown centroid was measured perpendicular to the palatal plane (ANS-PNS, Fig. 2D).40 Angular change was assessed relative to SN with the aid of an individual molar template (Fig. 2E). All linear measurements were made to the nearest .1mm using digital calipers. 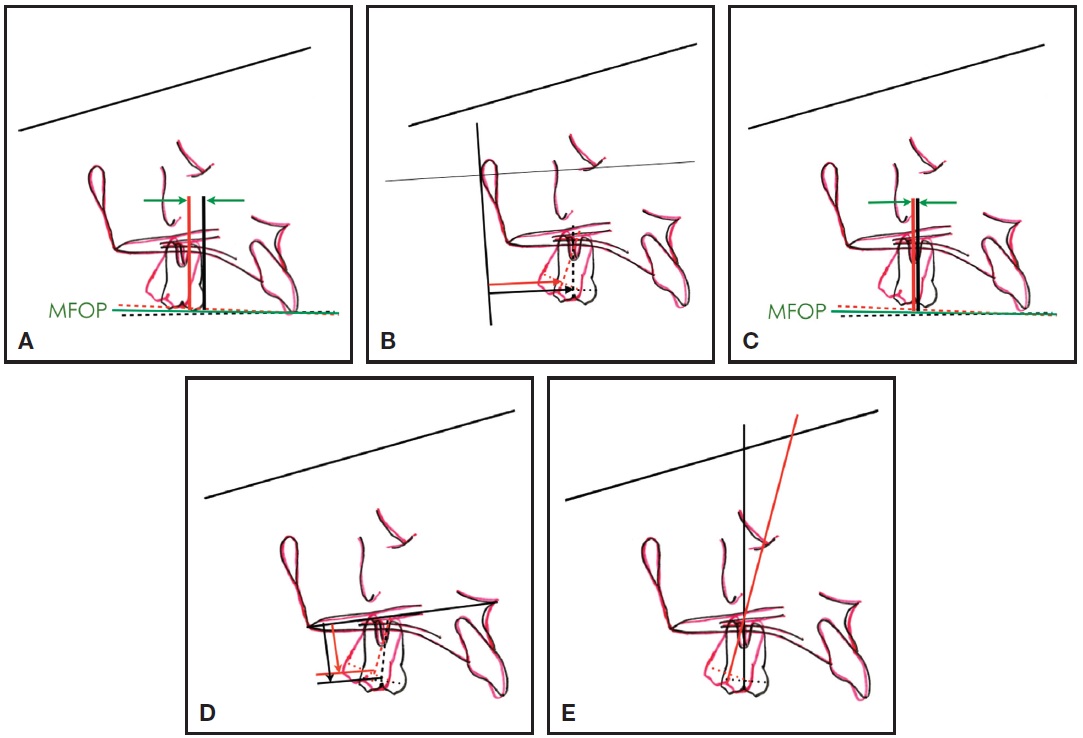 Intra-examiner reliability was tested by random selection (based on a table of random numbers) of 10 subjects for a second set of cephalometric tracings and superimpositions. A University of Hong Kong Intraclass Correlation application was used to calculate the correlation coefficient for each pair of duplicate cephalometric measurements (Table 2).41

Because the standard deviations were essentially the same in both groups, simple two-sample t-tests were used for comparative analysis of molar crown displacement (Table 3) and distal movement (Table 4). There were no statistically significant differences between the two groups with regard to upper first-molar tipping, intrusion, or crown distalization, or in the number of days required to achieve a super-Class I molar relationship. The patients in the V group demonstrated a 27% greater rate of crown movement (1.1mm per month) compared to the C group (.9mm per month; p = .053). They also showed 71% more movement of the molar root apex (2.9mm vs. 1.7mm per month; p = .03).

In a typical case from the V group, a 13-year-old female presented with a Class II malocclusion (Fig. 3). 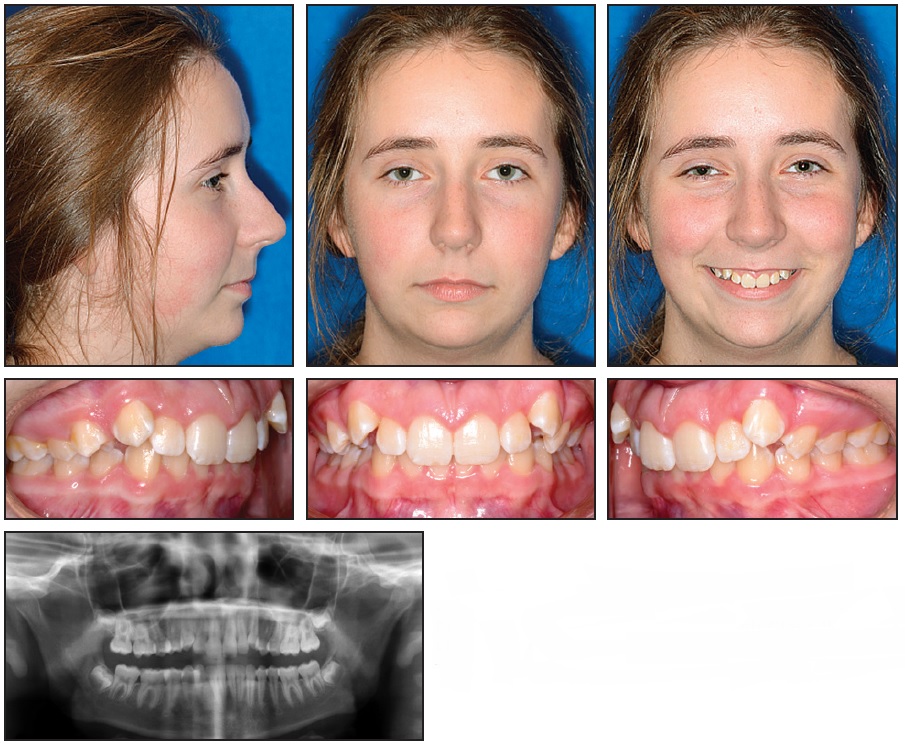 As previously described, her treatment included upper-molar distalization with a miniscrew-supported Horseshoe Jet and mandibular preadjusted fixed appliances (Fig. 4). She was instructed to use an AcceleDent device for 20 minutes daily.

A Class I molar relationship was achieved in six months, with a movement rate of .8mm per month (Fig. 5). 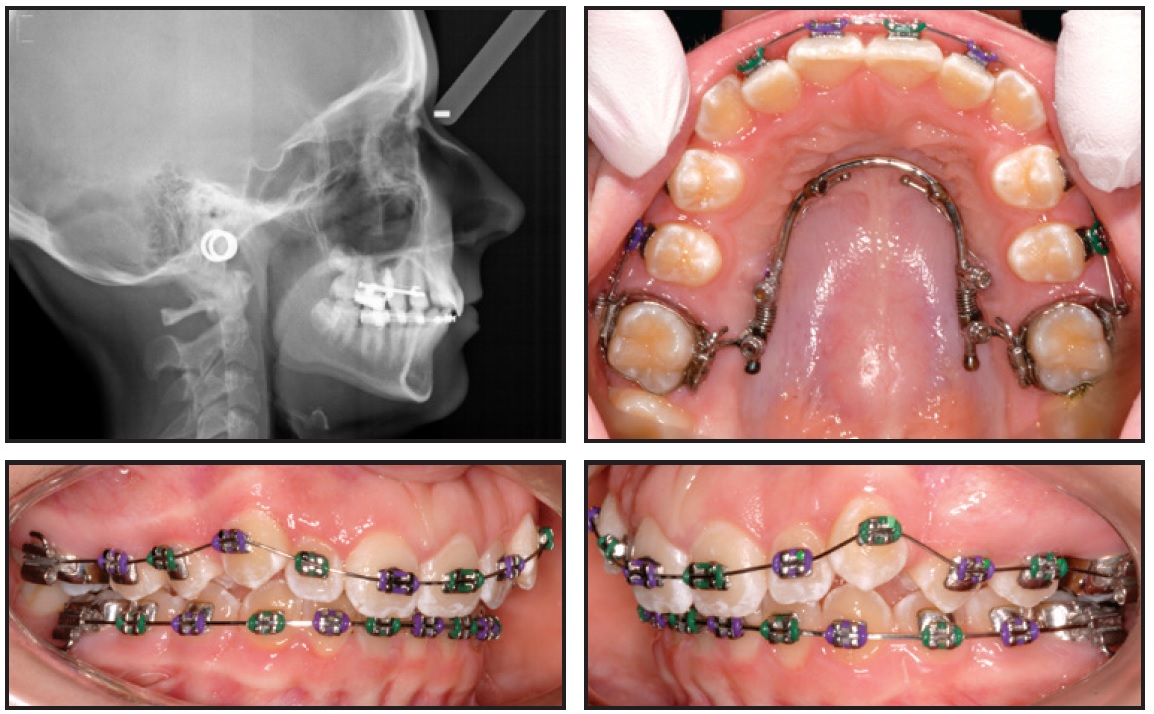 Fig. 5 Class I molar relationship achieved after six months of treatment. AcceleDent use recorded as an average of 29 times per month.

The patient's use of vibration during that period was recorded as an average of 29 times per month. Treatment was completed in 16 months with 15 visits (Fig. 6). 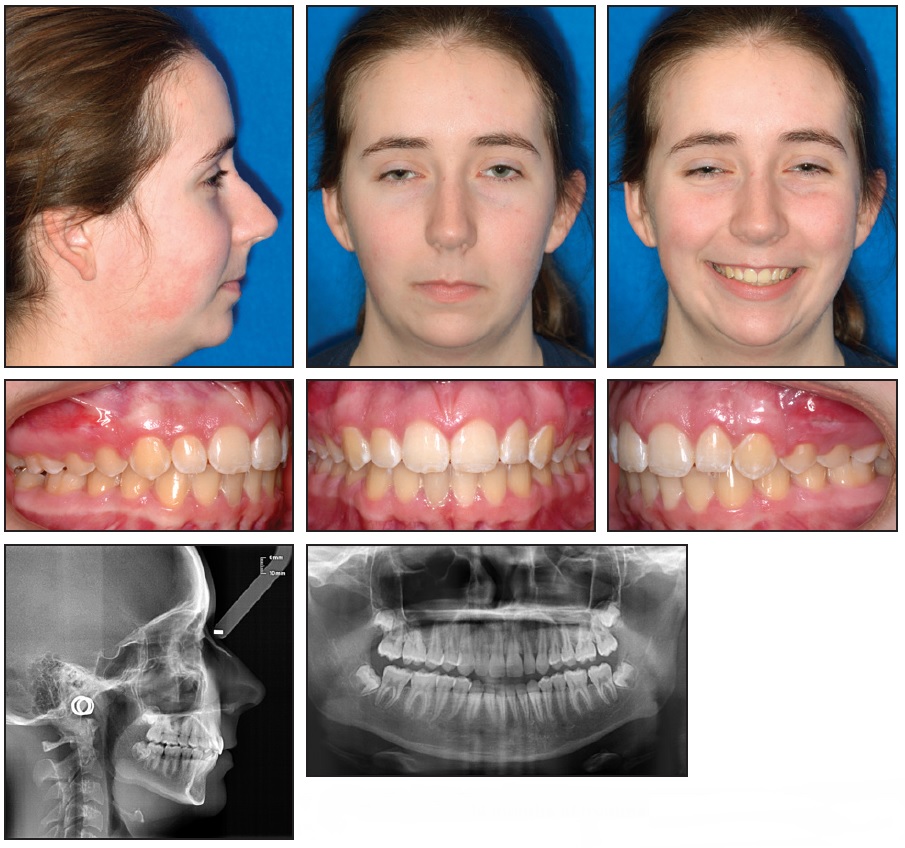 Fig. 6 Patient after 16 months of treatment with 15 visits.

The Distal Jet*** and its modifications have been the subject of many investigations (Table 5).18-26,29,35,37 The Horseshoe Jet design used here works without premolar supports, ensuring that anchorage is derived exclusively from the miniscrews. As a result, it prevents anterior anchorage loss, even though miniscrews have a tendency to tip mesially.

Given that the clinician's only involvement was the recompression of coil springs in the same way in both groups, it seems doubtful that the results of this study might have been affected by operator distortion or lack of patient compliance. Slightly more molar movement was achieved in the V group (6.9mm vs. 6.0mm), but the C group showed 2 degrees more molar tipping; neither result was statistically significant. It might be assumed that the eruption status of the second molars could adversely affect distal movement. Although there were more patients with unerupted second molars in the C group, previous studies argue against the potential advantage for more efficient molar distalization.19,42

Determining the time required to distalize molars was obviously somewhat subjective, since there was no way of pinpointing exactly when during the four weeks between appointments a super-Class I molar position had been achieved. Although the V group obtained a super-Class I molar relationship in an average 200 days compared to 227 days for the C group, this 27-day difference was of only modest significance (p = .08). The average 6.7 months required to distalize the molars in the V group was similar to the findings of previous Distal Jet studies, but the 6.9mm of crown movement was nearly twice that reported elsewhere (Table 5).18-26,29,35,37 Moreover, the V group exhibited a 27% greater rate of crown movement (1.1mm vs. .9mm per month; p = .053) and 71% more molar apex movement (2.9mm vs. 1.7mm; p = .03). 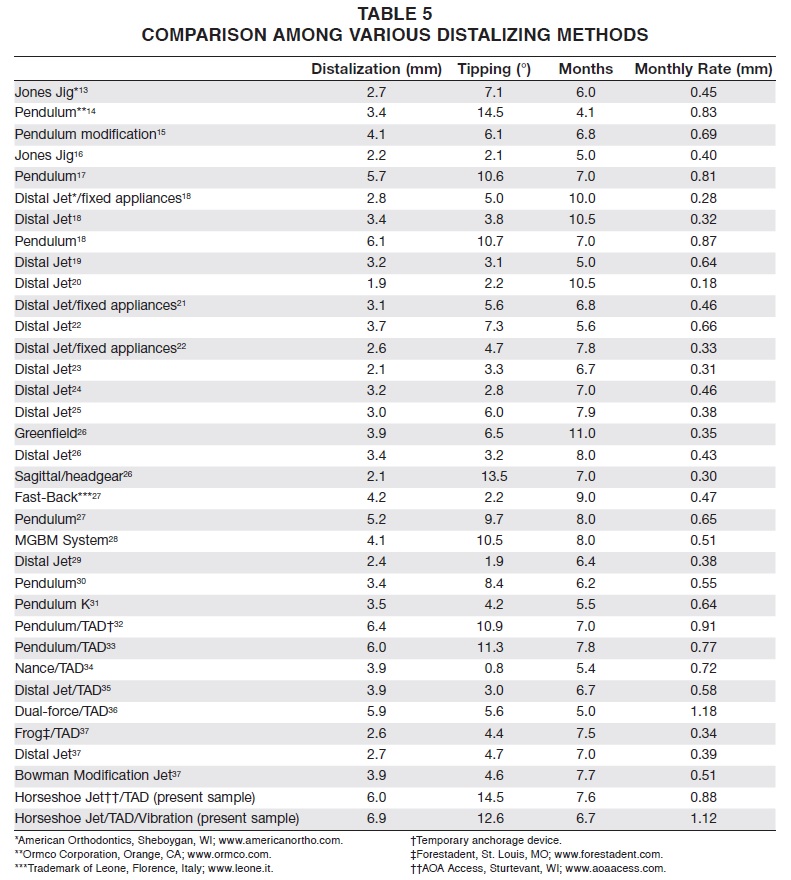 The 20% most compliant and 20% least compliant patients in the V group, based on the average number of days they used the AcceleDent device, were isolated for further analysis (Table 6). The six most cooperative used the device an average 26 days per month, whereas the six least cooperative used it only six days per month. As might be anticipated, the compliant patients experienced better results: 1.23mm per month of molar movement, 186 days to achieve Class I, and 65 days for leveling of the mandibular dentition.7 Sporadic users demonstrated only .89mm per month of movement, 220 days to Class I, and 106 days to level -- similar to the results of the C group. It should be noted, however, that when compliance and results were compared for the entire sample, the correlation was almost zero.

These preliminary results are comparable to those of other reports on the effects of vibration on tooth movement: a 30% increase in the rate of leveling of the lower arch,11 nearly three times the typically reported 1mm per month of tooth movement in the maxilla,9 a 150-200% reduction in the time required to move a tooth,2 and an upper-canine retraction rate of 1.16mm per month vs. .79mm per month for a control group10 (rates quite similar to the present results). Extrapolating these effects to reduced treatment times would require further investigation, especially considering the multifactorial and subjective nature of what goes into a "finished" result.

Although the effect of vibration might be thought to have clinical relevance, the results shown here had a relatively modest statistical significance, at a level commonly reserved for preliminary exploratory investigations (p < .10). Considering that the significance of the effects seems to be balanced on a knife edge, future investigations of the time value of money and the money value of time must be factored into any clinical application.43,44

ACKNOWLEDGMENT: Thank you to Sheri Smith, President, Courante Oncology Clinical Research Services, Excelsior, MN, for her statistical consultation, and to Dr. Lysle Johnston for his assistance in conducting this investigation.

Fig. 1 AcceleDent* device consists of vibrational unit with attached mouthpiece (A) and charging/data-recording station (B). (Note: design has been changed since this study was conducted.)

Fig. 5 Class I molar relationship achieved after six months of treatment. AcceleDent use recorded as an average of 29 times per month.

Fig. 6 Patient after 16 months of treatment with 15 visits.