An adult patient with a complex Class III malocclusion involving extreme sagittal and vertical disharmony generally requires surgical resolution of the skeletal discrepancy before the orthodontic issues can be resolved.1-4 If the patient refuses surgery, however, an orthodontic camouflage alternative may be needed.

The Class III Carriere Motion 3D is a one-piece device that positions the dentition in a Class I platform from molars to canines (Fig. 1).2,8,9 The anterior pad is bonded to the lower canine and incorporates a hook for attachment of Class III elastics. The central arm passes over the two lower premolars with a slight curve following the contour of the dental arch. This segment is oval in its vertical cross-section to add rigidity while maintaining axial control of the lower canines and molars. Between the second premolar and molar, the arm flattens transversely to provide greater lateral flexibility; an offset bayonet bend and toe-in angulation produce a small, 10° distal rotation of the lower posterior pad, which is bonded to the molar.6,9-11 A Class II Carriere Motion Appliance can be substituted in a Class III patient with missing lower molars. 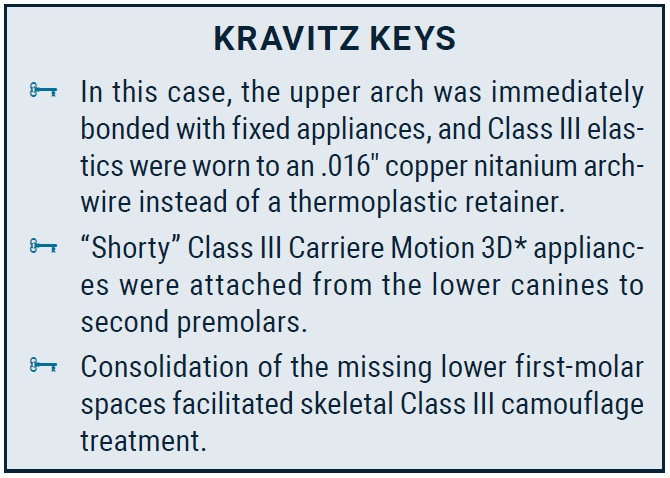 A 21-year-old male had visited several orthodontic offices looking for an orthodontic-­only correction with an esthetic result. He was apprehensive about undergoing surgery, and he wanted to preserve his intrinsic familial facial characteristics. His goals were to improve the obvious prognathism; recover a normal masticatory function; and correct the dental-arch alignment, crossbite, open bite, high upper canines, and crooked anterior teeth.

The morphological diagnosis was a skeletal Class III malocclusion with a hyperdivergent long face, maxillary hypoplasia, transverse constriction, and hyperplastic mandible (Fig. 2A). 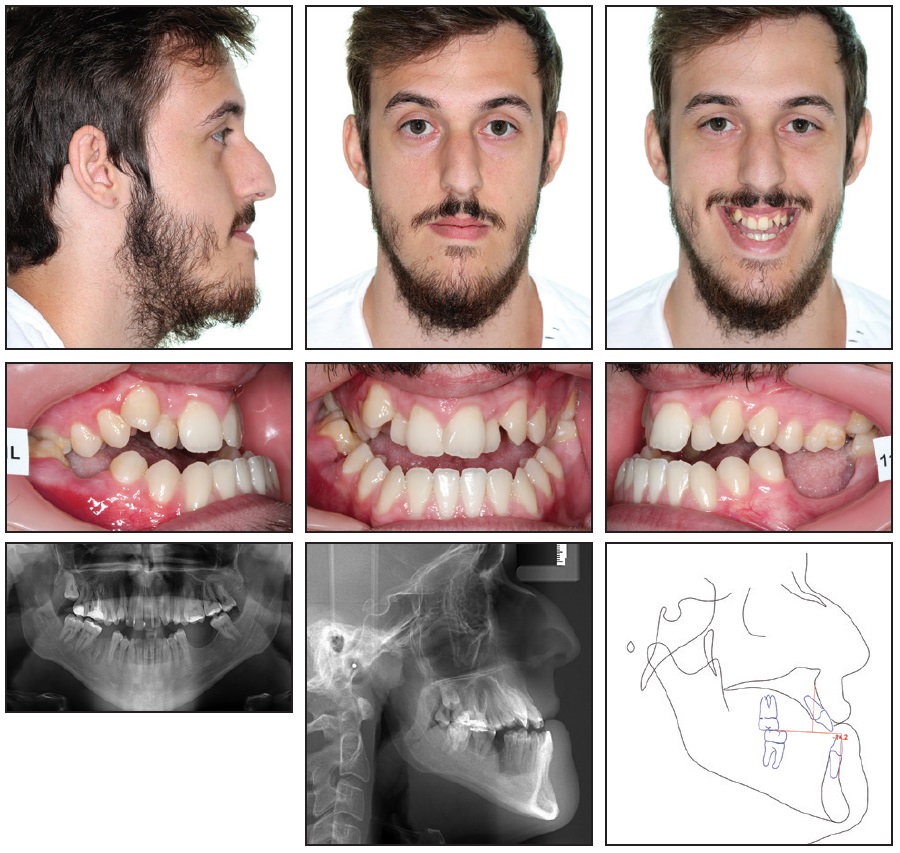 The dental arches increased in divergence from the first permanent molars to a 5mm anterior open bite, resulting in a negative overjet and a full crossbite—a challenging condition with a high risk of root resorption over a long period of treatment. The lower right first molar and left first and second molars were missing, and the upper arch had two high canines (Fig. 2B).

The neuromuscular pattern was hypotonic; the patient’s leptosomic body type was reflected in a poor masticatory stroke in the masseter and temporalis muscles. The tongue and its elevating musculature were hypertrophic, with improper function at rest and when chewing and swallowing.

When the patient rejected the proposed surgical-orthodontic treatment, we applied the “sagittal first” principle in planning nonsurgical orthodontic treatment with a sequence of movements from distal to mesial.1,2,7,9 Treatment goals were to correct the Class III malocclusion, close the anterior open bite, correct the posterior crossbite, protract the maxillary teeth, retract the mandibular teeth, and effect a counterclockwise rotation of the posterior functional occlusal plane to balance the Wits appraisal7 (Table 1). The soft-tissue Class III relationship would be improved by mesializing the lower right second and third molars into the space of the missing first molar, thus avoiding the need for a future implant. 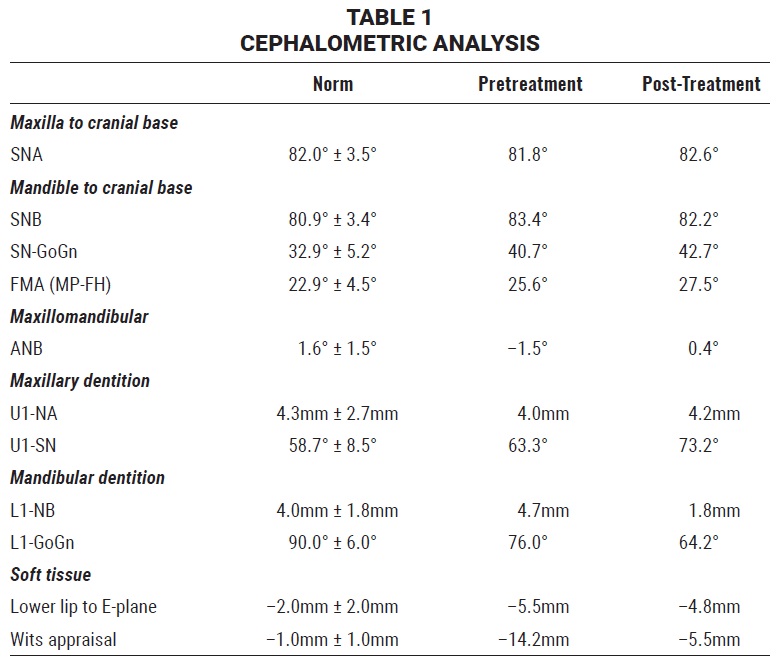 In any open-bite case, we prioritize myofunctional therapy. This patient’s tongue and skeletal condition would have interfered with tooth movement, lengthening treatment and increasing the risk of severe root resorption and future relapse. To correct a tongue dysfunction, we use an in-office rehabilitation program involving three tongue positions: at rest, when chewing, and when swallowing (Fig. 3).

A hypertrophic tongue rests between the dental arches, with the lips sealed and in strong contraction. The tongue protrudes between the teeth to produce a third point of contact with the lips. A negative pressure is thus produced inside the mouth relative to the outside atmospheric pressure. The exercise for this position involves the following steps:

If the dental arches are inefficient in chewing, the tongue compensates by pushing the food bolus against the hard palate and the lingual aspects of the teeth, acting as an alternative masticatory organ. These forces cause hypertrophy of the striated muscular fibers and an increase in tongue volume, aggravating the open bite and interfering with orthodontic treatment. We use chewing gum in the exercise for this position: 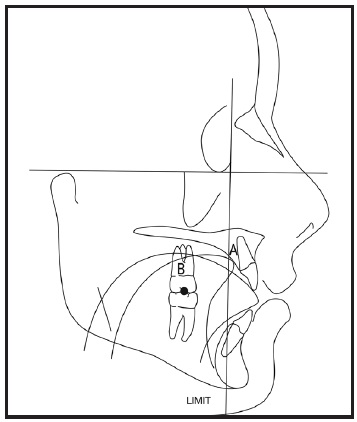 Fig. 3 Tongue rehabilitation exercises for open-bite patient A: Point to place tip of tongue at rest and as starting point for deglutition. B: Specific zone for molar mastication and for clenching contact when swallowing. Limit: Line not to be crossed by tip of tongue.

In swallowing, a hypertrophic tongue is projected between the anterior teeth, actively contributing to the open bite and the risk of root resorption, interfering with tooth movement, and compromising long-term stability. The patient therefore needs to practice synchronizing these three positions:

Although a vacuformed maxillary retainer can be used for attachment of Class III elastics, we decided to start with upper leveling in this case to help develop the maxillary arch and maximize soft-tissue support in the upper lip. After MBT**-­prescription .022" Carriere SLX passive self-ligating brackets were bonded, a maxillary .014" round copper nitanium (27°C) archwire was used for four weeks (Fig. 4).

The maxillary archwire was then changed to .016" round copper nitanium (27°C), and “shorty” Class III Carriere Motion 3D appliances were placed from the lower canines to second premolars to begin distalizing the lower posterior segments with Class III elastics and thus correct the negative overjet (Fig. 5). Lower posterior build-ups were bonded to avoid occlusal interference with the upper molar tubes. This temporarily increased the anterior open bite but enabled us to work on the transverse dimension while simultaneously beginning the sagittal correction.

Four weeks later, the maxillary archwire was changed to .014" × .025" copper nitanium (27°C) to finish the sagittal correction (Fig. 6). A positive overjet was achieved in eight weeks. At this point, we noted a slight increase in the open bite caused by a premature occlusal contact of the lower third molars and the upper second and third molars, which were undergoing transverse correction.

After the Carriere Motion 3D appliances were removed, the mandibular arch was bonded with .022" Carriere SLX passive self-ligating brackets, and an .014" round copper nitanium (27°C) archwire was inserted (Fig. 7). Four tongue tamers were also bonded to the lingual surfaces of the lower incisors, and the maxillary archwire was changed to .017" × .025" copper nitanium (35°C).

In another four weeks, the archwires were changed to maxillary .019" × .025" copper nitanium (35°C) and mandibular .014" × .025" copper nitanium (27°C), and the lower right second molar tube was rebonded more mesiogingivally for molar uprighting. A nickel titanium closed-coil spring and ligature were applied to move the lower right second molar mesially into the space of the first molar.

The mandibular archwire was then changed to .019" × .025" beta titanium for five additional months. 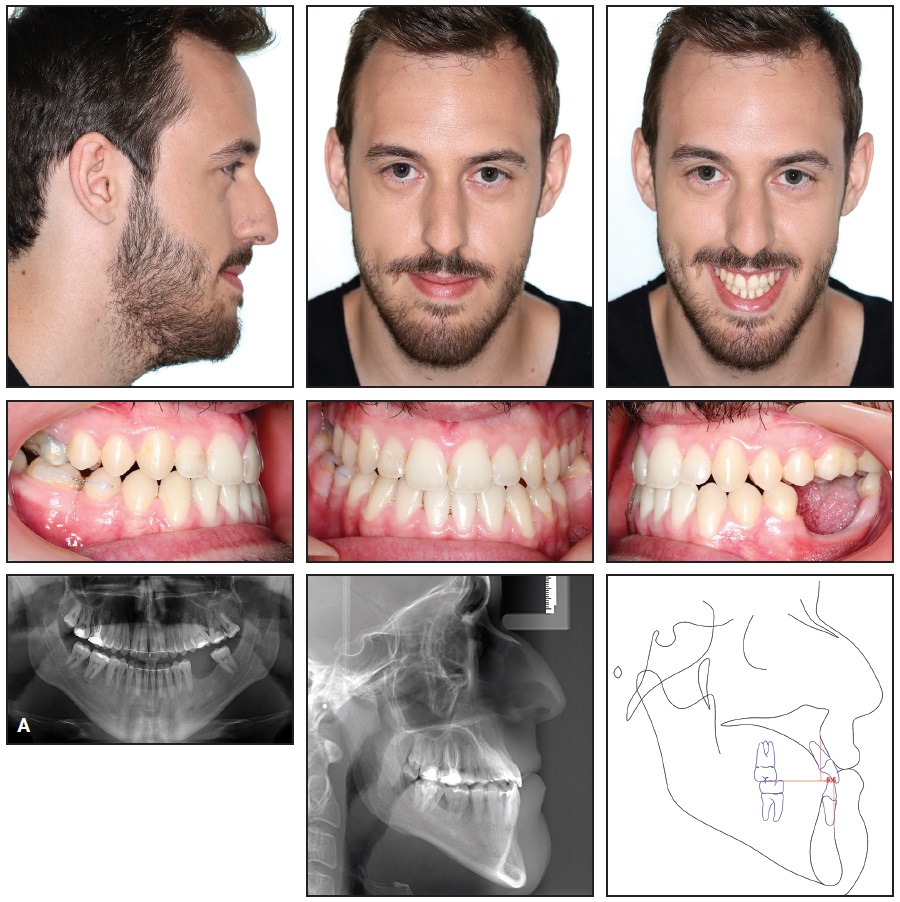 Fig. 11 A. Patient after 22 months of treatment (continued in next image).

The patient showed an improvement in the sagittal spatial geometry of the intermaxillary relationship, with a consequent improvement in his facial esthetics12 (Table 1). A minor distal movement of the mandible was seen, with no change in the size of the maxilla or mandible, and proper molar mastication was recovered (Fig. 11B). 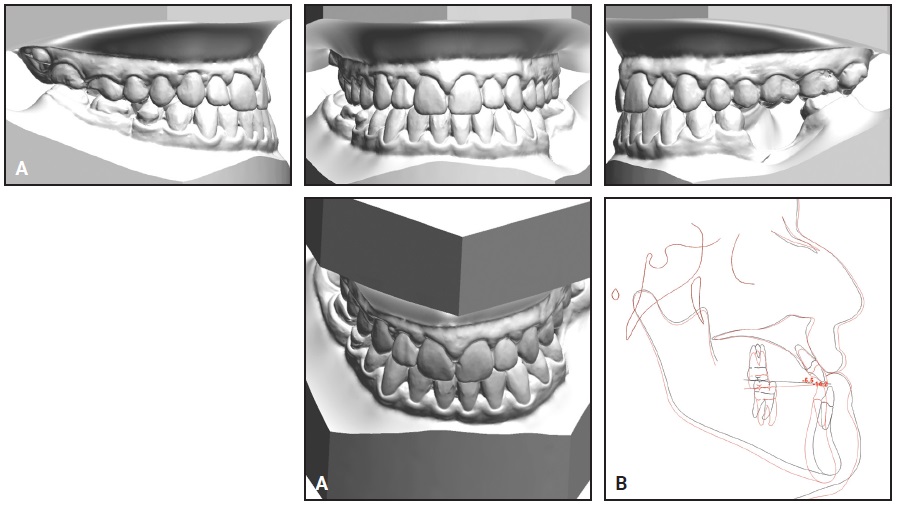 Fig. 11 (cont.) A. Patient after 22 months of treatment. B. Superimposition of pre- and post-treatment cephalometric tracings.

Fixed upper and lower lingual retainer wires and nighttime vacuformed retainers were prescribed; in addition, a small segment of wire was bonded buccally to stabilize the lower right second molar by interproximal connection with the lower second premolar (Fig. 12). 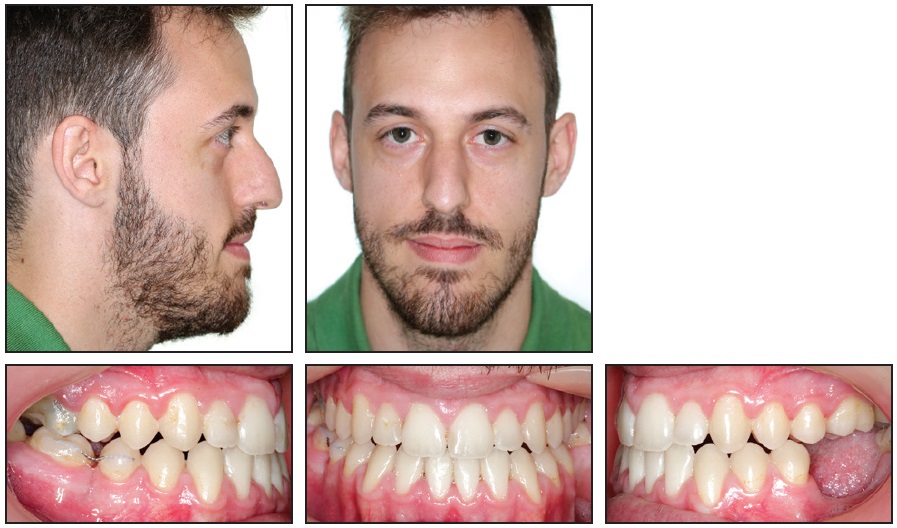 After 18 months of retention, only the buccally bonded wire was continued (Fig. 13). 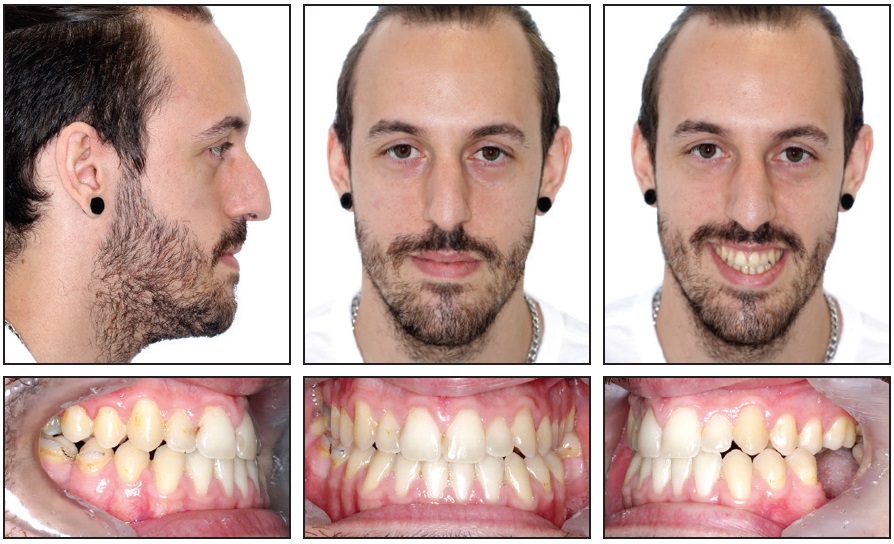 Fig. 13 Patient five years after treatment, with no retention after 18 months other than buccal interproximal connector between lower right second molar and second premolar.

The complexity of this case required us to prioritize the various problems contributing to the skeletal Class III malocclusion. The most urgent issue was to recover a proper tongue function. Along with the use of light force, that made it possible to avoid the occurrence of root resorption during treatment.

Since the patient refused surgery, we took advantage of the many beneficial effects offered by the Class III Carriere Motion 3D appliance, in addition to mandibular distalization. The cant of the functional occlusal plane was tipped back, producing a direct improvement in the Wits appraisal. The elastic traction on the appliance enabled a counterclockwise rotation of the functional occlusal plane, improving the intermaxillary relationship and the prognathic appearance of the patient̓s face.

This nonsurgical treatment enhanced the patient’s facial esthetics without changing his intrinsic family traits, thus addressing his primary concern. His psychosocial relationships, self-­esteem, and confidence had improved by the end of treatment.4-6,9 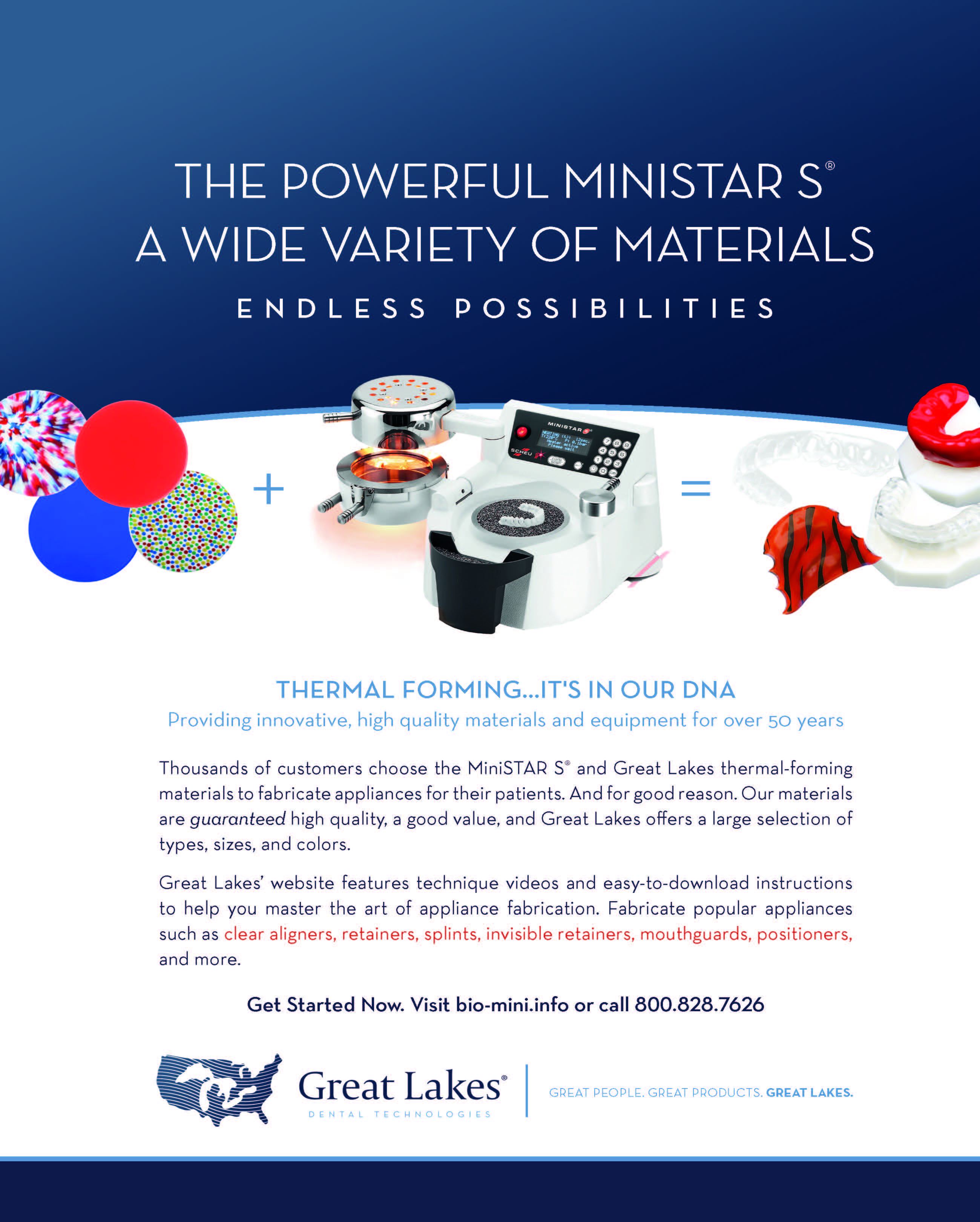 Fig. 3 Tongue rehabilitation exercises for open-bite patient (link to demonstration video is included in online version of this article). A: Point to place tip of tongue at rest and as starting point for deglutition. B: Specific zone for molar mastication and for clenching contact when swallowing. Limit: Line not to be crossed by tip of tongue.

Fig. 11A A. Patient after 22 months of treatment (continued in next image).

Fig. 11B (cont.) A. Patient after 22 months of treatment. B. Superimposition of pre- and post-treatment cephalometric tracings.

Fig. 13 Patient five years after treatment, with no retention after 18 months other than buccal interproximal connector between lower right second molar and second premolar. 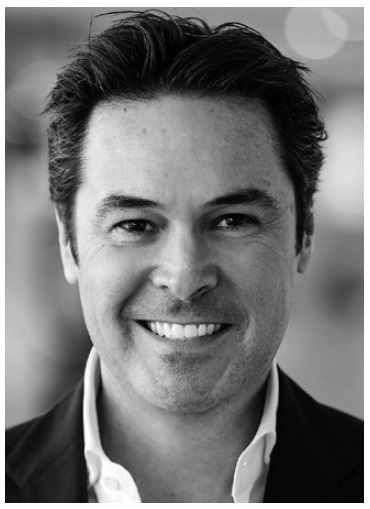 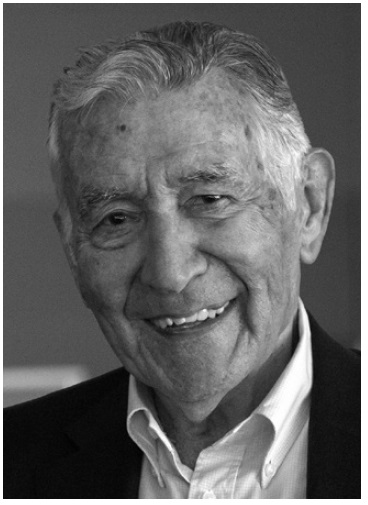