First Molar Extractions in a Patient with Marfan Syndrome

This is the second in a series of case reports from the three finalists for the 2021 Eugene L. Gottlieb JCO Student of the Year Award, presented by American Orthodontics. Each is being published online only and will be freely accessible. One of the judges from JCO’s editorial board will introduce each student.

Residents who are candidates for the JCO Student of the Year Award provide not only a well-documented case report for consideration by a panel of orthodontists, but also letters of recommendation and an essay. The finalists are provided a clinical case for which to plan treatment. All these components are taken into consideration by the panelists.

Dr. Cristina Sola Martin submitted an exceptionally documented and well-controlled treatment of a patient with Marfan syndrome. This young man’s significant crowding warranted the removal of four compromised first molars, with an emphasis on detailed finishing. Dr. Sola Martin’s diagnosis and treatment-planning skills were further demonstrated by her superb analysis and summary of treatment. Excellent illustrations were included for the different treatment scenarios she described, including comparisons of the benefits and difficulties that should be considered. The detailed analyses, supporting literature references, and narrative thought processes evident in both her case report and the treatment-planning exercise were very impressive.

Marfan syndrome (MFS) is an autosomal dominant genetic disorder of connective tissue caused by a mutation of fibrillin-1. The prevalence is estimated to be one to two affected individuals per 10,000 live births, with no predominance according to sex or ethnicity.1 The diagnosis is purely clinical, involving the classical triad of MFS: ocular, cardiovascular, and musculoskeletal disorders.

This article describes the orthodontic treatment of a 13-year-old patient with MFS.

A 13-year-old male was referred to the University of Southern California Department of Orthodontics by a general dentist to address an impacted maxillary right canine (Fig. 1A). The patient’s medical history included Marfan syndrome, cardiac surgery to repair a mitral valve, asthma, and difficulty concentrating at school. 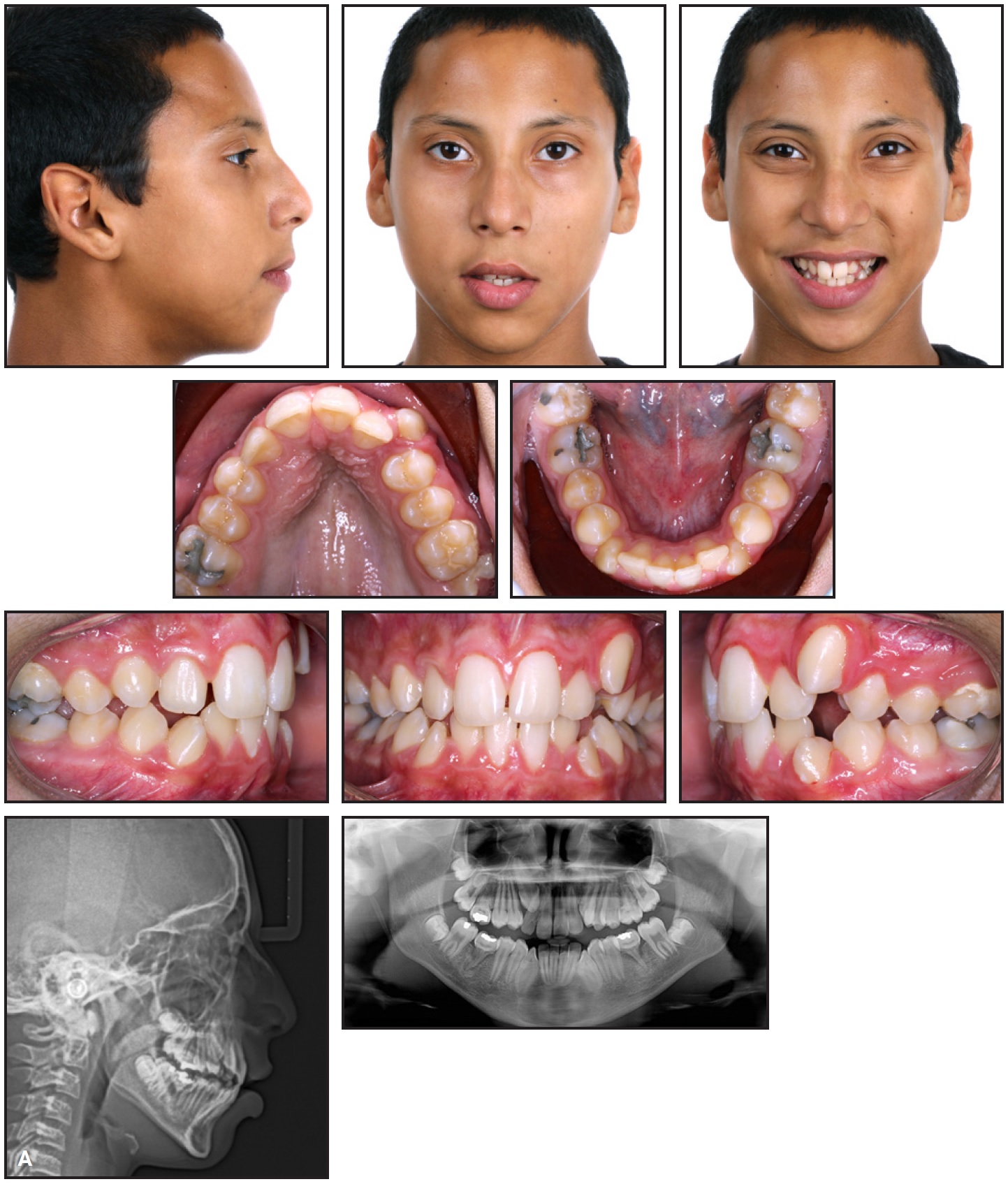 Clinical findings included facies consistent with mouthbreathing, a convex profile, dolichocephaly with excessive lower facial height, and lip incompetence. The mandible was shifted to the left, and the maxillary midline was shifted to the right of the facial midline. The patient exhibited incisal edge and gingival margin inconsonance and insufficient incisor display in smiling.

Intraoral examination found a maxillary transverse deficiency without crossbite, due to the increased curve of Wilson. The maxillary right and left first molars were in a Brodie bite. The first molar was a half-step (3.5mm) Class II, but the canine classification could not be determined because of an ectopic maxillary left canine and an impacted maxillary right canine. The maxilla presented with a high vault and a “V” shape, with 12mm of crowding; the mandible had an 8mm arch-length shortage.

Periodontal probing revealed generalized plaque and bleeding on probing, as well as pockets as deep as 6mm at the maxillary first molars. Cone-beam computed tomography showed a palatally impacted maxillary right canine, along with root resorption and morphological anomalies in all first molars (Fig. 1B). Vitality testing of the first molars was positive.

Cephalometric measurements (Table 1) indicated a skeletal Class II relationship (ANB = 7.3°) due to a retrusive mandible (SNB = 74.1°) and a high-angle tendency (SN-GoGn = 42.4°). The mandibular incisors were protruded, and the maxillary incisors were retroclined. The airway showed some restriction.

Treatment objectives were to achieve ideal smile esthetics and function and to improve lip competence. Specific orthodontic objectives were to improve facial esthetics by controlling the vertical growth tendency, increasing the incisor display in smiling, broadening the maxillary arch, and achieving a pleasant smile arc and smile projection; to improve the occlusion by correcting the dental Class II, bringing the canines into the maxillary arch, broadening the maxillary arch, leveling the curve of Wilson and curve of Spee, and alleviating the crowding; and to promote health and stability by improving oral hygiene, properly positioning the teeth in the alveolar bone, and providing solid occlusal contacts in both maximum intercuspation and lateral movements.

Three treatment plans were considered, each involving the extraction of all four first molars because of the poor prognosis of those teeth. In the first scenario, orthognathic surgery would allow skeletal and dental correction of the malocclusion, improving the patient’s airway and facial esthetics. In the second scenario, maxillary and mandibular miniscrews would be placed to hold the vertical dimension and thus allow skeletal improvement by counterclockwise mandibular rotation and dental correction of the malocclusion. The third scenario was to dentally camouflage the malocclusion by holding vertical growth with a high-pull headgear and maximum maxillary anchorage vs. minimum mandibular anchorage. The patient and family chose the third scenario.

The arches were bonded with MBT* preadjusted appliances, except that the second molars were banded. Leveling and alignment were carried out on .016" nickel titanium archwires, followed by .016" × .022" nickel titanium. A high-pull headgear was worn for a minimum 12 hours per day to control maxillary vertical growth and to provide anteroposterior anchorage throughout treatment. Once the arches were leveled, heat-treated .016" × .022" stainless steel archwires with posts soldered distal to the lateral incisors were placed, and space closure was achieved using active tiebacks to the soldered hooks.

Space for the maxillary right canine was opened using an open-coil spring on an .016" × .022" stainless steel archwire. Once the space was opened, the canine started erupting palatally without the need of for surgical exposure. The canine was brought into the arch using an .014" nickel titanium overlay and a power chain from the .016" × .022" archwire to a bonded lingual button (Fig. 3).

Prior to finishing and detailing, new records were taken for reevaluation and further planning (Fig. 4). Intercuspation was finished using two months of Class II elastics and triangle elastics. After debonding, a Hawley wraparound retainer was delivered for the upper arch and a 3-3 fixed lingual retainer was bonded in the lower arch.

Total treatment time was 30 months (Fig. 5). All treatment objectives were achieved, and the patient’s chief complaint was resolved. Final records confirmed Class I molar and canine relationships and an ideal overjet and overbite, with anterior guidance and canine rise in function. A smile line consonant with the lower lip and a well-aligned dentition with good occlusion were obtained.

Fig. 5 A. Patient after 30 months of treatment. B. Superimposition of pre- and post-treatment cephalometric tracings.

The post-treatment panoramic radiograph showed root parallelism and no obvious root resorption. Assessment of cephalometric measurements demonstrated that the vertical growth was maintained, as indicated by the improvement in the profile and soft tissue (Table 1). Incisor inclinations were within the normal range.

Because MFS patients often have cardiovascular disease, the risk of endocarditis during invasive dental treatment must be considered.4 Following American Heart Association guidelines, no antibiotic prophylaxis was needed prior to orthodontic treatment in the present case.5

Craniofacial patterns frequently associated with MFS include dolichocephaly, retrognathia, a long face, and a high and narrow palatal arch,1 as were observed in our case. This patient also presented with a short ramal height, an obtuse gonial angle, and a steep mandibular plane. According to De Coster and colleagues, the growth of sutures in the cranial base of patients with MFS reduces their growth potential, and the anterior facial height in MFS patients is significantly greater than normal.2

Additionally, patients with MFS exhibit abnormalities in their periodontal ligaments and root morphology. Because the periodontal reaction to tooth movement is altered in MFS cases, this should be taken into account when moving teeth orthodontically.6

Developmental abnormalities of the teeth in MFS patients may include supernumerary teeth, enamel defects, dentinogenesis imperfecta, tooth dysplasia, and cyst formation in the jaws.3 Radicular deformations and pulp obliterations are other common findings. In the present case, radicular deformations associated with periodontal defects were found in all four first molars. Because of the crowding and poor prognosis for these teeth, we decided to extract them.

Normando and Cavacami described the effects of bilateral FPM extractions on the skeleton: a reduction in the Gn-SNA angle, counterclockwise rotation of the occlusal plane, and a mild decrease in lower anterior facial height.10 In our case, because the patient had a long face and high-angle tendency, these side effects were considered favorable.

Yavuz and colleagues studied the effects of early FPM extractions on the development and eruption of third molars in adolescents with a mean age of 15.35.11 In their sample, 17% of the third molars had erupted on the extraction side, compared with only 6.6% of the third molars on the contralateral side; the difference was statistically significant. Our patient’s third molars were starting to erupt at age 15.

Efficient orthodontic mechanics must be employed after FPM extractions to ensure the delivery of light forces. Intervals between activations might be increased, allowing the involved tissues time to recover and avoiding the development of soft-tissue clefts, which have a tendency to reopen spaces. In this patient, active tiebacks to a posted stainless steel archwire were used for more controlled space closure.12

Orthodontic management of syndromic patients usually requires an interdisciplinary approach, an understanding of the problems associated with such cases—including ectopic or impacted teeth, severe maxillary constriction, and dental malformations—and a determined orthodontist. In the case shown here, we achieved an ideal and harmonic smile with coincident midlines and Class I canine and molar relationships.

Fig. 1A A. 13-year-old male patient with high-angle tendency, skeletal and dental Class II malocclusion, and impacted maxillary right canine before treatment (continued in next image).

Fig. 5 A. Patient after 30 months of treatment. B. Superimposition of pre- and post-treatment cephalometric tracings.