This is the first in a series of case reports from the three finalists for the 2021 Eugene L. Gottlieb JCO Student of the Year Award, presented by American Orthodontics. Each will be published online only and will be freely accessible. One of the judges from JCO’s editorial board will introduce each student.

An anterior open bite with dental protrusion and severe crowding is commonly treated with premolar extractions and vertical control. This remarkable case report by Amanda Gross, the 2021 recipient of the Student of the Year Award, shows the beautiful orthodontic treatment of a patient with such a malocclusion. Whether you are a resident or a seasoned orthodontist, I hope you will marvel at her orthodontic biomechanical control and pristine documentation, almost as if her case were taken right out of McLaughlin’s Systemized Orthodontic Treatment Mechanics.

Open bites can also be categorized as either dental or skeletal in nature, although cephalometric studies have shown that most patients with anterior open bites present with both skeletal and dental characteristics.2,3 A dental open bite is diagnosed when the abnormalities are confined to the dentofacial regions, resulting in infraerupted maxillary and mandibular incisors.4 This type of malocclusion is generally attributed to environmental factors such as thumbsucking. The predictability of orthodontic treatment for a dental open bite is usually high, assuming the habit is suppressed during and after treatment. A skeletal open bite tends to be more complicated and is often considered one of the most difficult orthodontic problems to correct.5 Skeletal characteristics include reduced posterior facial height and excessive anterior facial height,6 mandibular plane angle, gonial angle,7 palatal plane inclination,3 maxillary molar eruption, and mandibular molar eruption.8 The etiology of skeletal open bite is often multifactorial, with potential contributors including genetics, prolonged habits, weak musculature, and airway obstruction.9

Many different approaches can be used to treat patients with open bites, depending on the etiology and extent. Nonsurgical approaches are designed to extrude the anterior teeth and/or intrude the posterior teeth, with the latter resulting in a reduction of the mandibular plane angle and lower facial height.10 Nonsurgical treatment options include habit appliances, anterior vertical elastics, posterior bite blocks, vertical chin cups, high-pull headgear, clenching exercises, and miniscrews.9 Severe skeletal open bites often require orthognathic surgery, especially when the clinician is unable to modify growth.9

With so many treatment alternatives, it can be a challenge to determine the best treatment plan for an open-bite case. This article describes a patient who had characteristics of both dental and skeletal open bite and was treated with a combination of relative posterior intrusion, incisor extrusion, and clenching exercises.

A 12-year-old female presented with the chief concern of crooked teeth (Fig. 1A). 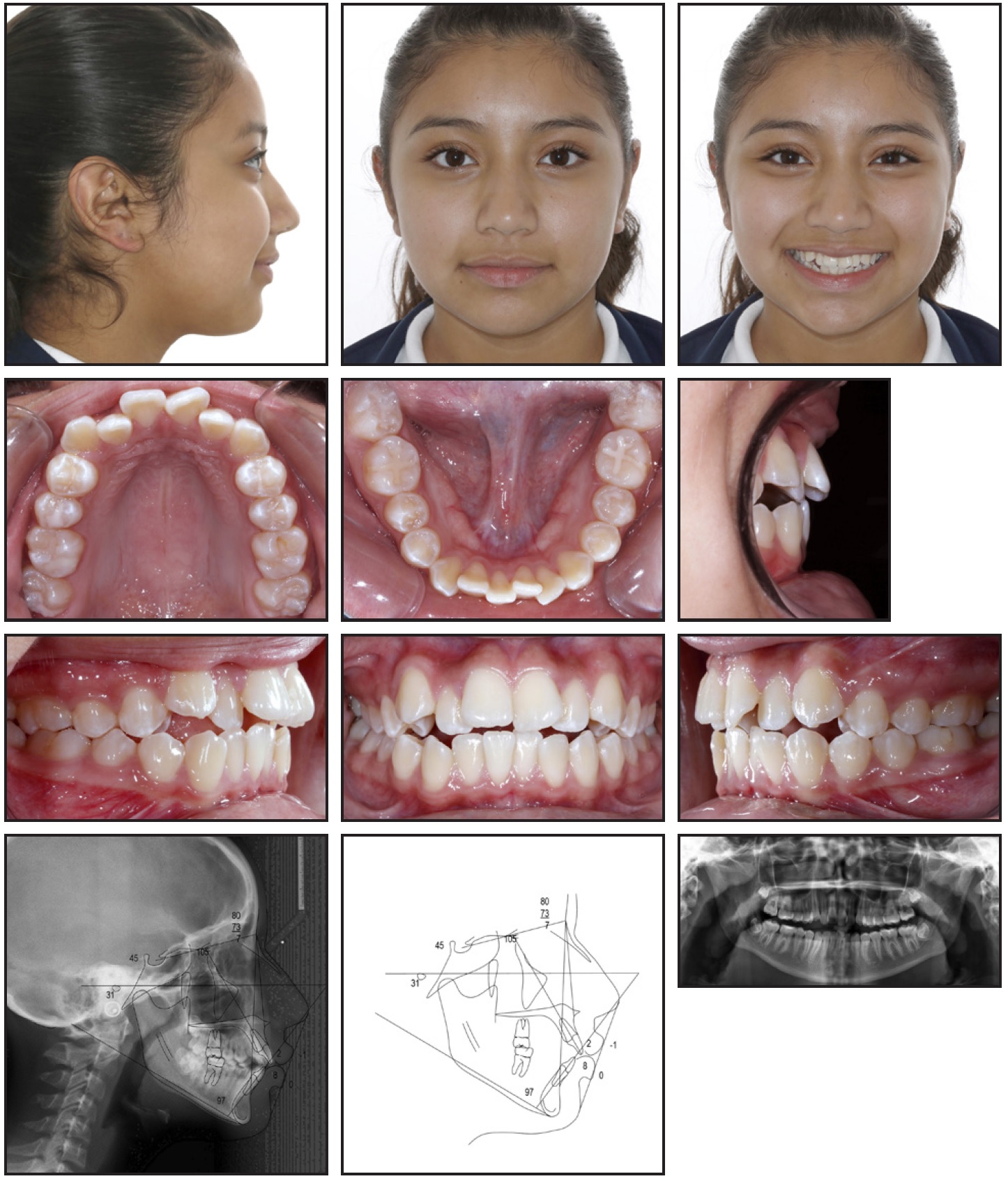 The patient had no reported habits, trauma, TMD, pathology, or respiratory difficulties. She exhibited good oral hygiene and reported brushing twice a day and flossing daily.

Growth assessment indicated a cervical stage 6 and Skeletal Maturity Index (SMI) of 10. Considering the lack of secondary sex characteristics and start of menarche less than six months prior to records, one and a half to two years of remaining adolescent growth was estimated.

Facial diagnosis found a convex profile with mild lip protrusion, excessive lip thickness, a slightly acute nasolabial angle, a flat smile arc, and a gingival display that was deficient by about 3mm. No lip strain or asymmetries were noted (Fig. 1B). 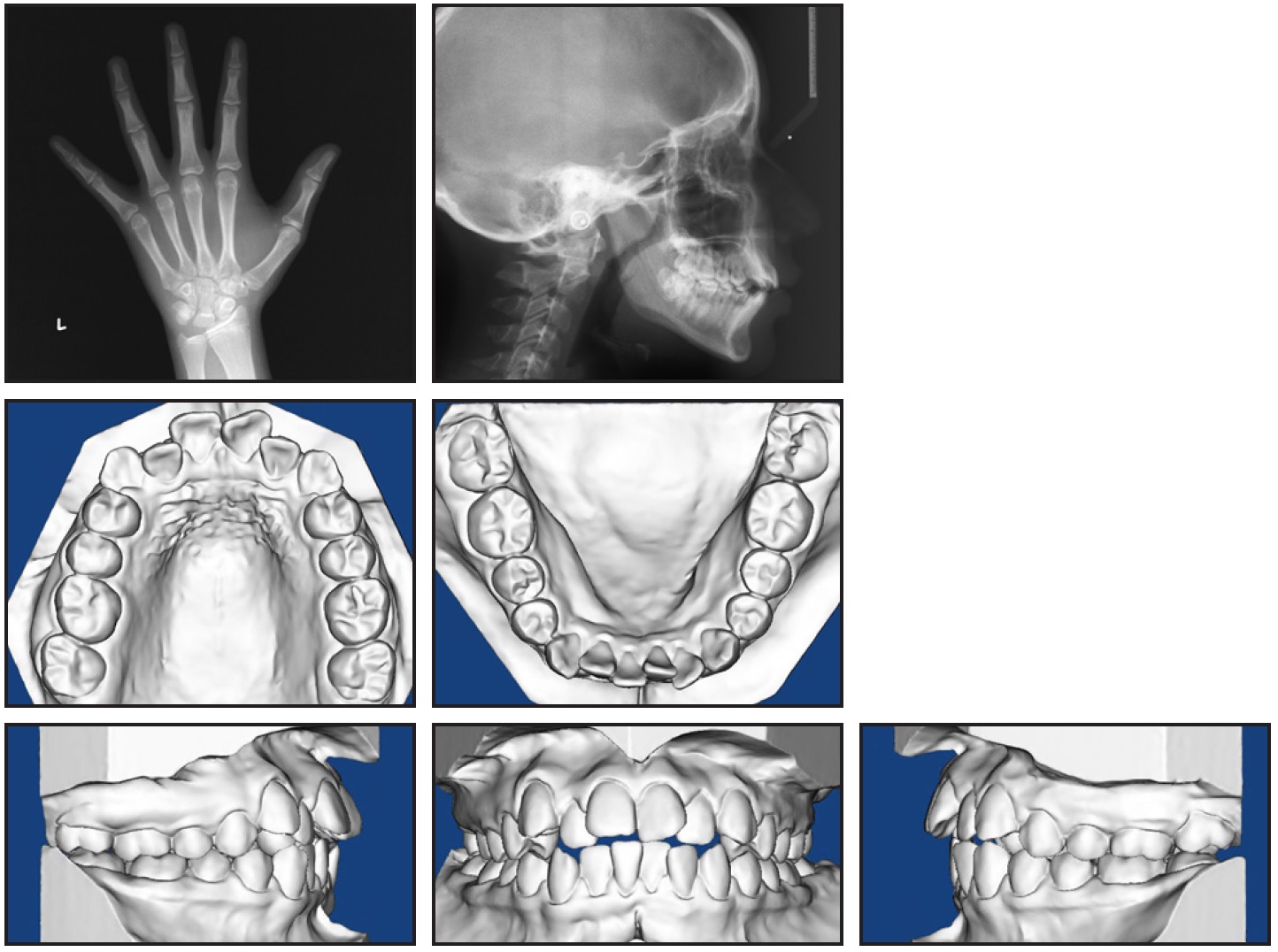 Dentally, the patient was half-step Class II at the canines, with proclined upper incisors, slightly proclined and protrusive lower incisors, and an overjet ranging from −1mm to 6mm. She demonstrated a mild open bite with an overbite ranging from .5mm to −1mm, a mild curve of Spee, a moderate curve of Wilson, severe upper crowding, moderate lower crowding, deficient keratinized gingiva from lower canine to canine, and a Bolton discrepancy involving 1.5mm of anterior maxillary excess. No shift was detected between centric relation and maximum intercuspation.

Skeletally, the patient was hyperdivergent, with normal transverse widths and a Class II skeletal base due to a protrusive maxilla and an orthognathic mandible. Because she had a steep and short SN angle, additional measurements relative to Frankfort horizontal were used to complete the diagnosis (Table 1).

Treatment objectives were to slightly reduce facial convexity with about 1-1.5mm of lip retraction and a 1-2° increase in the nasolabial angle. Skeletal goals were to minimize opening of the occlusal plane and downward and backward rotation, but otherwise to expect minimal growth or changes in any dimension. Maxillary dental treatment objectives included holding the upper first molars in all three planes of space (resulting in relative intrusion) while retroclining the upper incisors about 7.5°, extruding them about 3mm, and retracting the incisal edge 3-4mm. Mandibular dental objectives were to retrocline the lower incisors 5-7.5°, extrude them about 1mm, retract the incisal edge 2-3mm, and protract the lower first molars 1-2mm bilaterally, minimizing the use of elastics to avoid extrusion. The transverse goal was to upright the lower curve of Wilson with lingual root torque and to maintain intermolar and intercanine width within about 1mm.

At seven months, space closure began on .019" × .025" preposted stainless steel wires with 9mm nickel titanium closed-coiled springs from the archwire hooks to the first molars to help protract the lower molars and minimize upper anchorage loss. The springs were later moved to the second molars to finish space closure, and Class II elastics were worn for two months to maintain a Class I relationship (Fig. 2A and 2B). 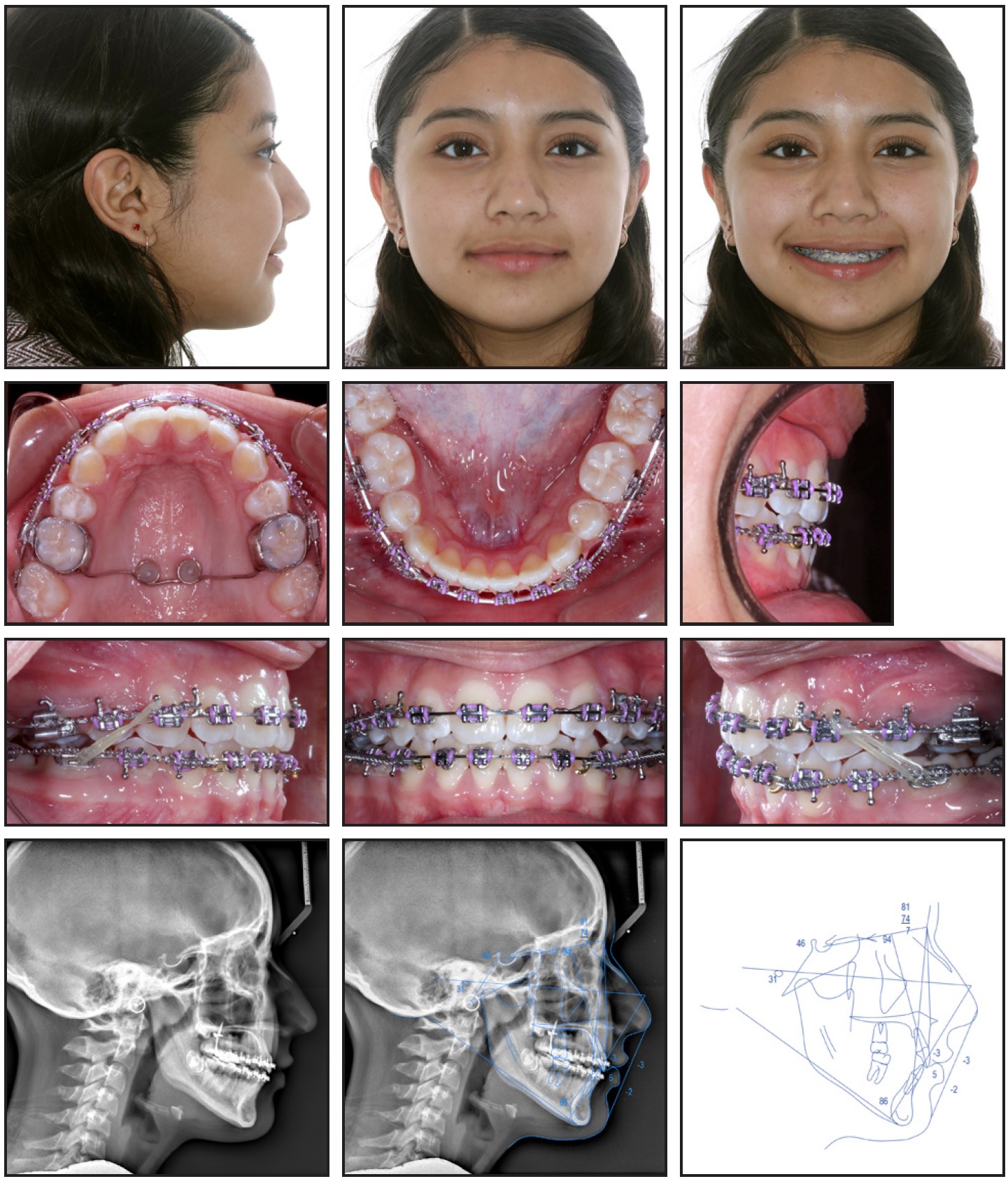 Fig. 2 Progress records after 13 months of treatment (continued in next image). 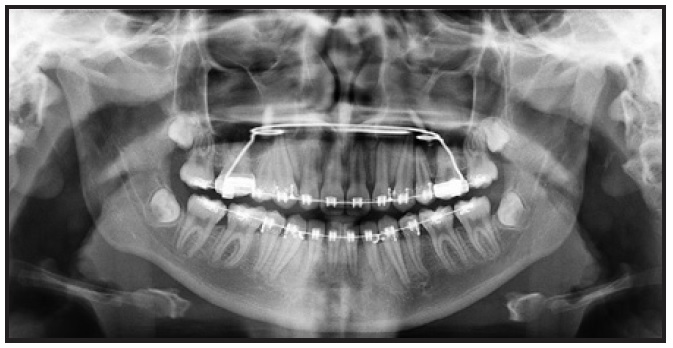 Class II elastics were worn for two and a half months during finishing with upper and lower .019" × .025" stainless steel wires. Four months of treatment were lost due to clinic closure caused by the COVID-19 pandemic. 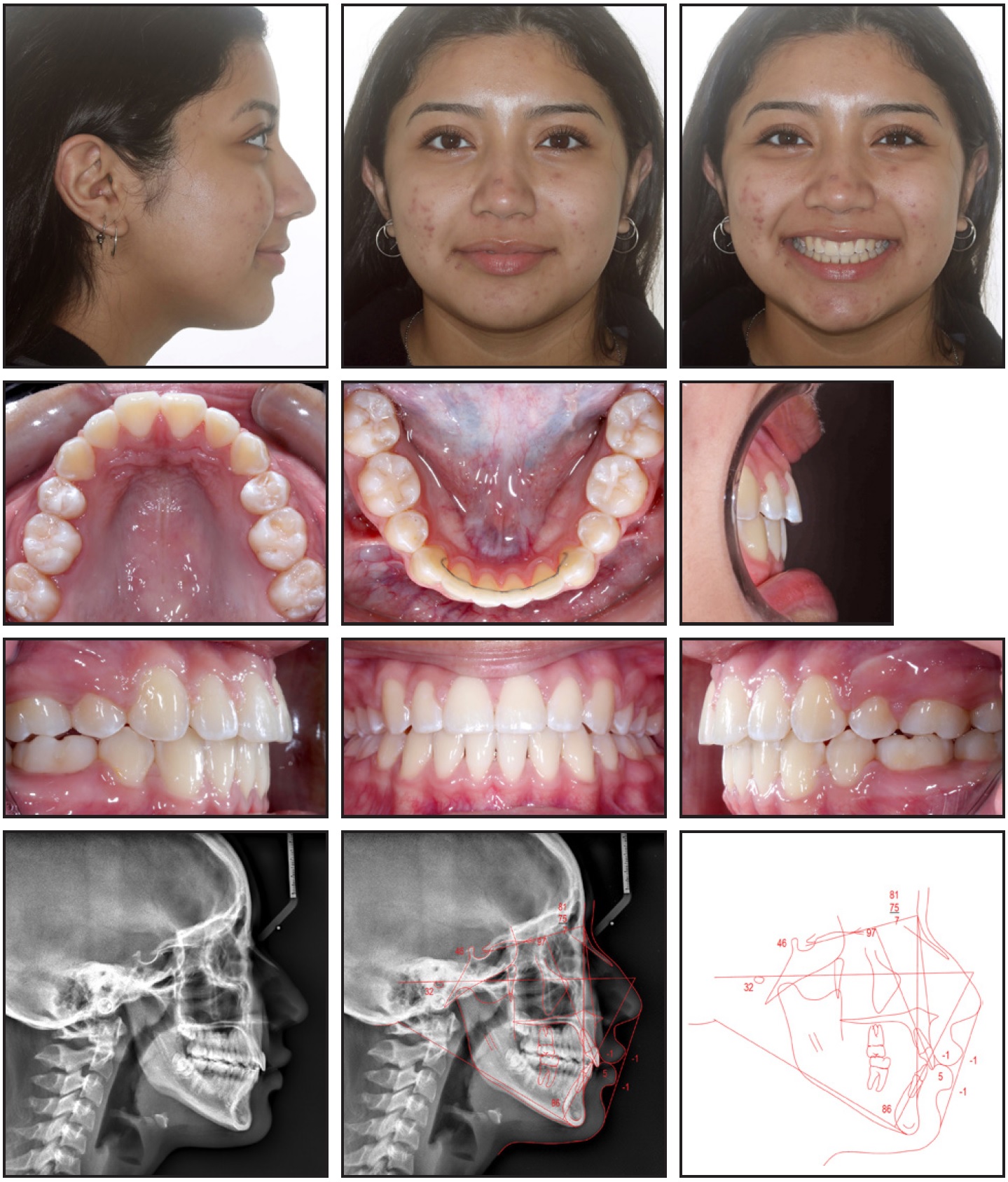 Fig. 4 Patient after 24 months of treatment (continued in next image).

Considering the initial incisal irregularity and the patient’s good oral hygiene, a Bond-A-Braid†† wire was bonded to all lower anterior teeth for retention. The patient also received upper and lower Essix‡‡ retainers and was instructed to wear both full-time for one month, 12 hours per day for two months, and then at night only. No changes were noted over the course of retention (Fig. 4B).

The main goals of treatment—open-bite closure and relief of crowding—were both achieved. A secondary goal was to slightly reduce soft-tissue convexity with minor lip retraction. This was also attained, although the patient’s lip thickness increased, which would explain why the retraction was less than anticipated. The gingival display and smile arc were improved by the slight extrusion, retraction, and retroclination of the upper incisors (Fig. 5, Table 1). The lower incisors were uprighted more than planned, likely because of the negative bracket prescription and minimal use of a reverse curve in the lower arch. This resulted in a minor anterior overjet that could have been addressed with either maxillary interproximal reduction or proclination of the lower incisors. Additionally, the canines finished in a 1mm Class II relationship, but the molars finished super-Class I; therefore, a posterior Bolton discrepancy was likely present. 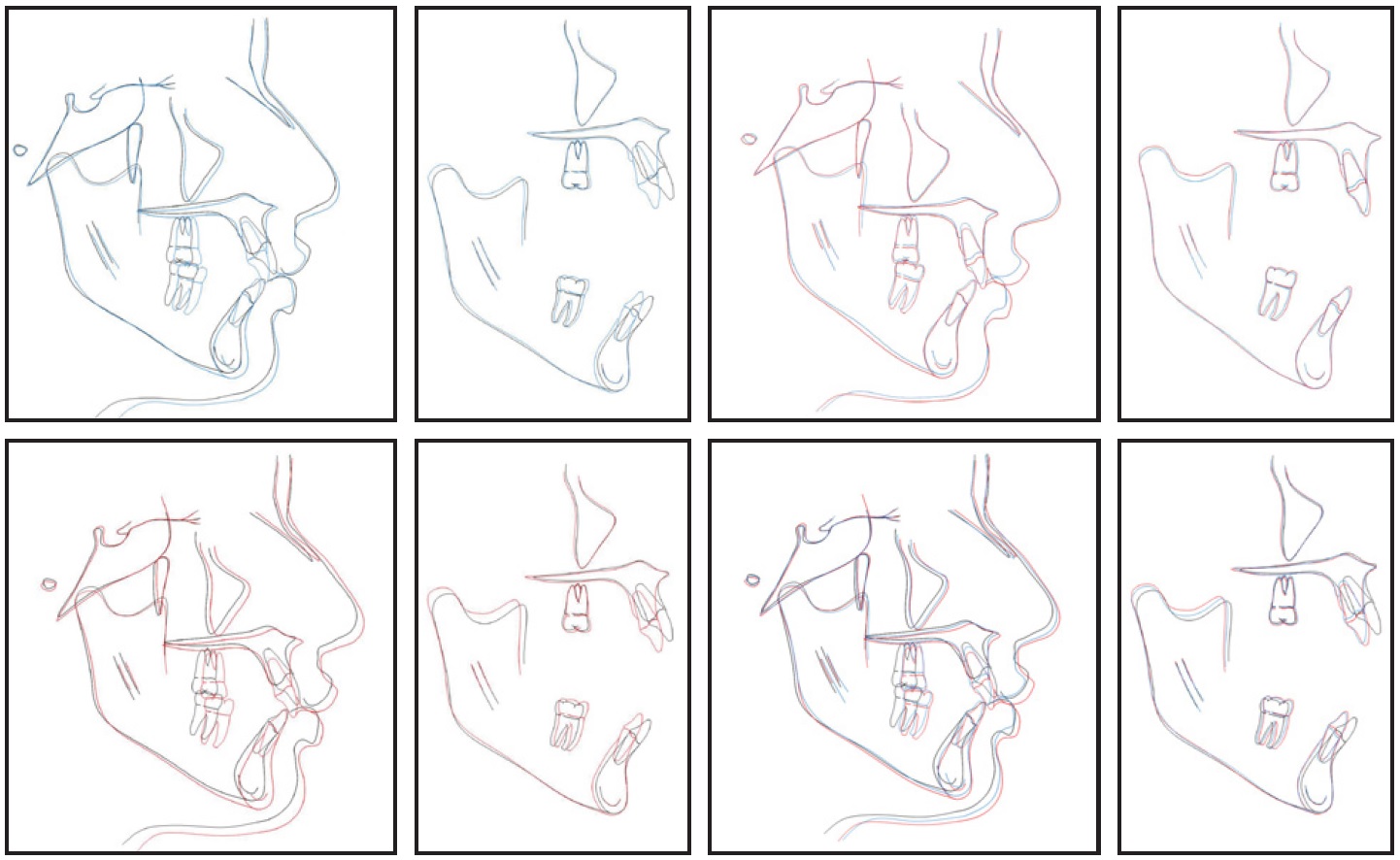 Fig. 5 Superimpositions of cephalometric tracings before treatment (black), after 13 months (blue), and after treatment (red).

The open bite was corrected with a combination of upper incisor extrusion and vertical holding of the first molars, attributable to the MSI-TPA for the upper molars and clenching exercises for both upper and lower molars. Since the patient exhibited more growth than would have been expected at a cervical stage 6 and SMI of 10, the more forward growth of the mandible may be ascribed to growth modification from relative posterior intrusion. The mandibular plane angle opened 1°, likely due to the four and a half months of Class II elastic wear.

Overall, the functional and esthetic orthodontic results should be stable over time. Despite the loss of four months of treatment from the clinic closure, the case still finished within the estimated time of 24 months, and the patient was happy with the outcome.

Skeletal anchorage has been shown to be effective in closing anterior open bites by molar intrusion.5,10,11 While many studies have analyzed active intrusion, relative intrusion by vertical holding can also assist in open-bite closure and forward mandibular rotation if the patient is still growing.10 During the five-year adolescent growth spurt, the maxillary molars erupt approximately 1.2mm per year, while the mandibular molars erupt approximately 1mm per year.12 Hyperdivergent patients tend to show more eruption than hypodivergent patients.12 Given our patient’s one and a half to two years of remaining adolescent growth and her hyperdivergent skeletal pattern, it can be deduced that the maxillary molars were relatively intruded by about 1mm (Fig. 5).

Anterior extrusion was needed to increase the patient’s incisal display. Although orthodontic treatment is innately extrusive, the stability of incisor extrusion is often a concern. Lopez-Gavito and colleagues, in a study of nonextraction cases treated with conventional fixed appliances, high-pull headgear, and elastics, found that more than 35% of the treated open-bite patients demonstrated 3mm or more of open-bite relapse.6 Open-bite patients treated with extractions have shown less open-bite relapse, however, as reported by Janson and colleagues.13 The increased stability in this extraction group was attributed to the “drawbridge principle,” whereby retraction and lingual tipping of the incisors result in increased bite closure.13,14 While the severe crowding and the objective of minimal change to our patient’s profile were the primary reasons for choosing an extraction plan in this case, the stability factor also played a role in determining the best treatment plan.

Myofunctional therapy, with an emphasis on clenching and swallowing exercises, was initiated during treatment to assist in open-bite closure. Myofunctional therapy is used to target function and reeducate the muscles of the face and oral cavity in resting posture, swallowing, and speech.15 The exercises employed (Table 2) were adaptations of two previously described techniques. English and colleagues had patients bite on a soft bite wafer for one minute five times a day, with each cycle including five seconds at 80% maximum clenching and five seconds of rest.9 In the three cases documented by this pilot study, the mastication exercises appeared to diminish vertical growth. The Alexander Discipline teaches a four-step myofunctional exercise for open-bite patients, including “click, slurp, squeeze, and swallow.”16 Having the patient click the tongue, breathe in, clench down, and swallow with the mouth closed is intended to address tongue posture, which should be maintained throughout retention to avoid anterior open-bite relapse.16 Long-term, well-controlled studies are needed to evaluate the efficacy of myofunctional therapy in anterior open-bite treatment and the prognosis for such treatment effects. 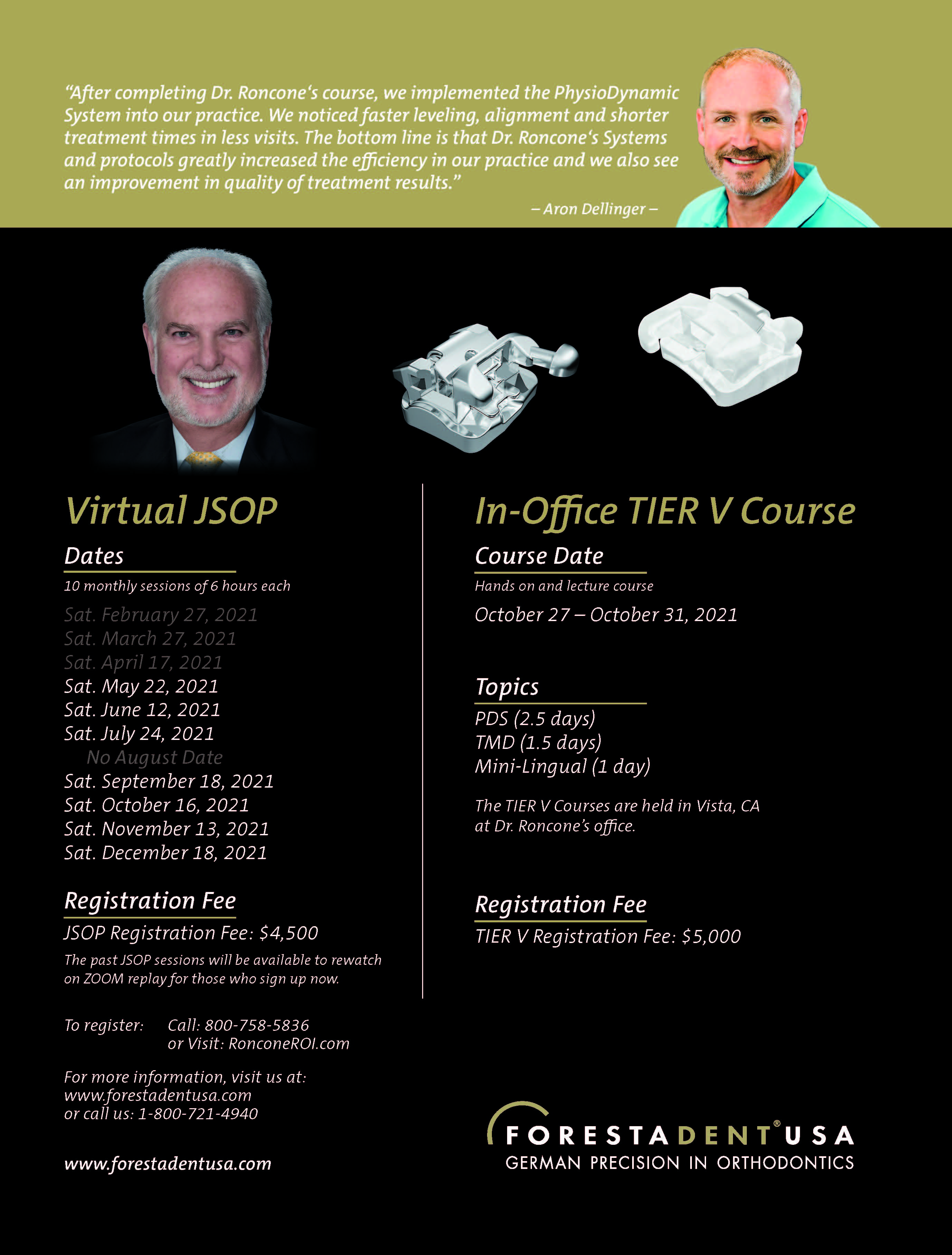 Fig. 2A Progress records after 13 months of treatment (continued in next image).

Fig. 2B (cont.) Progress records after 13 months of treatment.

Fig. 4A Patient after 24 months of treatment (continued in next image).

Fig. 5 Superimpositions of cephalometric tracings before treatment (black), after 13 months (blue), and after treatment (red). 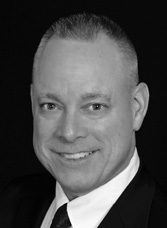