Orthodontic manufacturers are currently focused on developing technologies that will accelerate treatment and reduce overall treatment times. Although clinicians have access to a variety of appliances and wires designed to meet the demand for faster treatment, these advanced products, if used incorrectly, can actually slow the rate of tooth movement. The SmartArch* multi-force archwire is a new technology that can both accelerate treatment and, more important, improve clinical efficiency in treating malocclusions.

Acceleration means increasing the rate of progression toward a specific goal. Efficiency means employing the least effort possible to progress toward an end goal. This is the true definition of simplification. Our goal as orthodontists should be to increase efficiency rather than accelerate treatment, because if efficiency is improved, accelerated treatment will follow.

Nickel titanium archwires have been evolving since their initial development in the early 1960s,1-16 with Copper NiTi** introduced in the early 1990s. Superelastic wires are most commonly used with preadjusted appliances for initial leveling and alignment; finishing and detailing are typically accomplished with TMA* or stainless steel archwires, since 1st-, 2nd-, and 3rd-order bends cannot be placed in nickel titanium wires.

The three methods currently used to program these wire transformation phases are furnace heating, holding, and cooling; pulsed electric current from a Memory Maker***18; and pulsed fiber laser conditioning.†19 SmartArch wires are manufactured by the third method—known as multiple memory material technology—which precisely programs transition zones as narrow as .001" in a cross-section of shape-memory alloy wire. For example, 10 separate superelastic unloading zones can be programmed into a Copper NiTi wire (Fig. 2).17 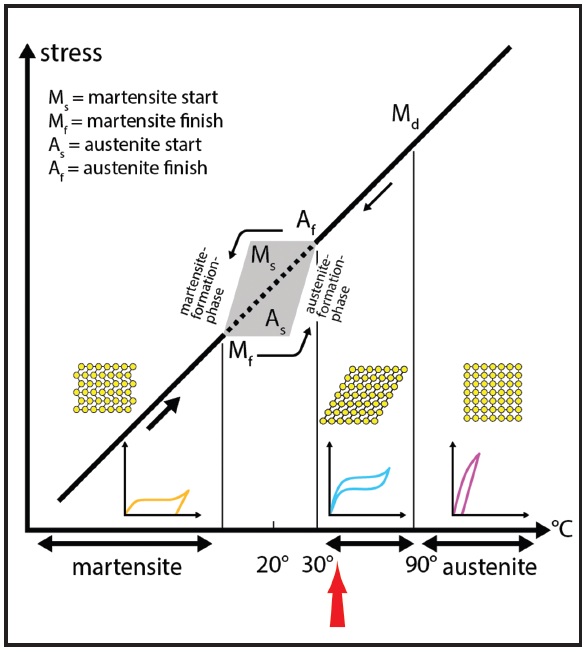 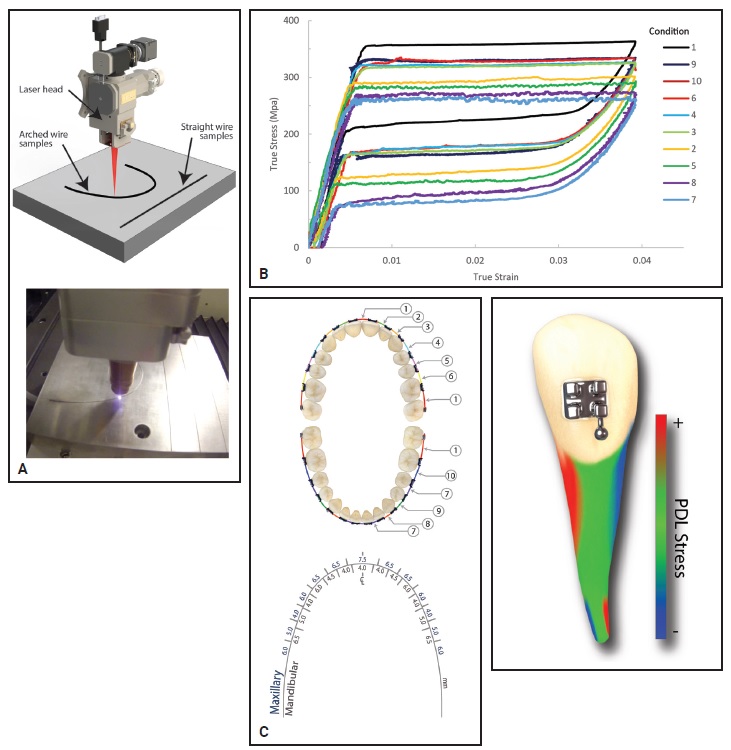 Fig. 2 A. SmartArch* wires produced with multiple memory material technology.17 B. As many as 10 levels of stiffness can be incorporated into a Copper NiTi** archwire. C. Key considerations include interbracket distances and stress on periodontal ligament (PDL).

Orthodontic anchorage techniques are based on the understanding that posterior teeth are larger than anterior teeth and maxillary teeth are larger than mandibular teeth. Larger teeth are more resistant to movement because of increased periodontal ligament (PDL) and root support. Therefore, a threshold of stress must be achieved before a biological response will cause tooth movement. Too little stress results in less tissue alteration and less attraction of osteoclasts, leading to slower tooth movement. Conversely, too much stress results in necrosis of the PDL tissue. Ideally, the application of appropriate force levels over an extended period will result in efficient tooth movement.

Viecilli and Burstone studied the effective force levels on average-size teeth in each arch to determine the appropriate level of force required to achieve an optimal biological response for each tooth.20 Their study focused on four common orthodontic movements: translation, tipping, rotation, and extrusion. SmartArch archwire programming was based on specific PDL compressive stress values derived from Viecilli and Burstone’s finite element modeling of digital dental templates. The result is an archwire with seven specific zones preprogrammed to apply appropriate forces to each individual tooth, both maxillary and mandibular.

Orthodontists have traditionally chosen starting archwires based on their ability to insert the wire comfortably into the patient’s mouth. Considering the force levels found in Viecilli and Burstone’s analysis, however, the .014" Copper NiTi archwire typically used to begin treatment underpowers the maxillary arch and overpowers the mandibular anterior segment. In short, our most common starting archwire provides too little force in the upper arch and overstresses the lower anterior teeth (Fig. 3). 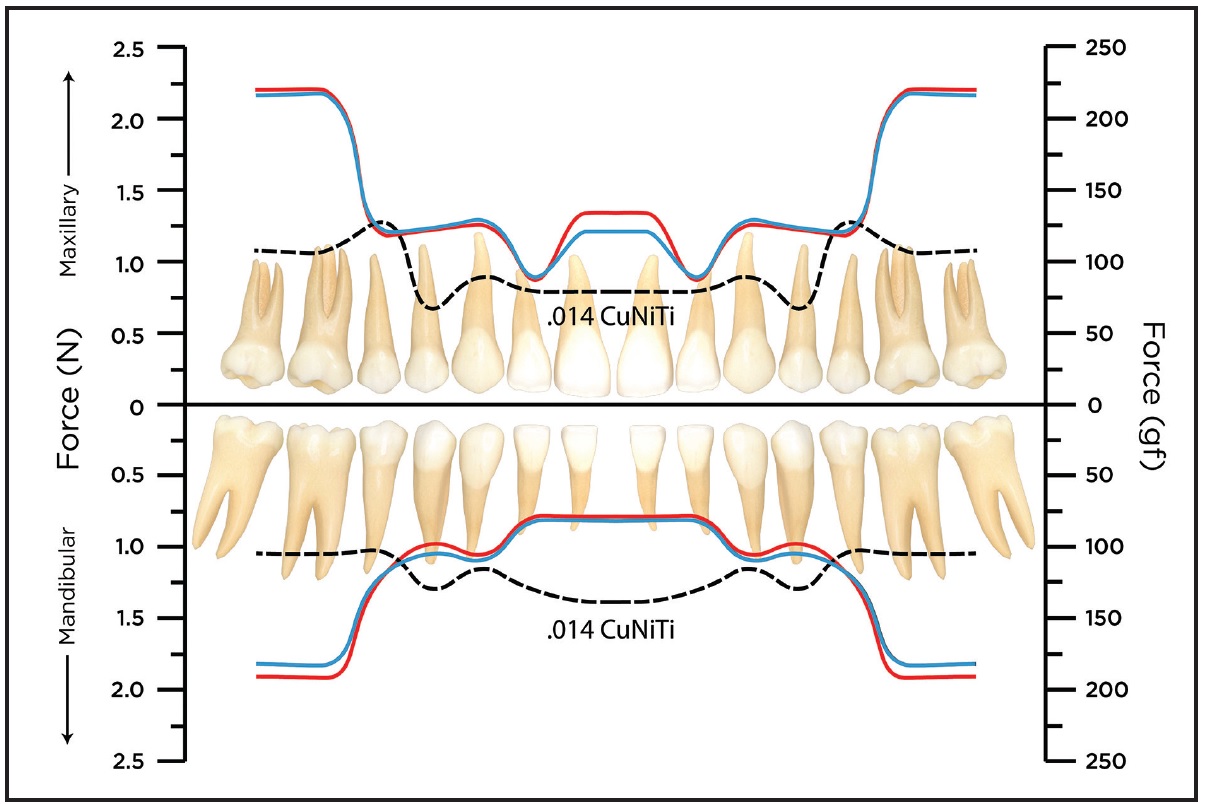 SmartArch archwires deliver physiologically optimized forces over an extended period. With carefully applied orthodontic mechanics, Smart­Arch wires can shorten the lag phase, reduce adjustment and reactivation requirements, and avoid indeterminate mechanics, thus increasing orthodontic efficiency. An ideal treatment sequence begins with an .016" SmartArch Copper NiTi wire, moves into an .018" × .025" SmartArch Copper NiTi wire, and finishes with either TMA or stainless steel archwires. The current objective is to develop protocols for treating the majority of cases in 12 months or less.

Basic considerations involved in SmartArch diagnosis, treatment planning, and biomechanics include the following.

Wire placement: Bend the archwire to create stress-induced martensitic transformation. Any type of mild to moderate (1-3mm) bend will suffice. Avoid sharp bends that cause permanent deformation and wire breakage.

Patience: Let the wire work. Allow time for the lag phase to finish and frontal absorption to take over. Any removal or adjustment of the wire causes a reversion to the lag phase. Resist the tendency to adjust too frequently.

Whole arch: Bond as many teeth as possible, including second molars and blocked-out teeth, right from the start. This allows the biology to work consistently across the entire arch.

Orthodontists will need to shift their paradigm from an “adjust at every appointment” (tinkering) mentality to an attitude of observing the body’s response to the mechanics and allowing the technology to work. Overactivation of SmartArch wires reverts the patient into the lag phase, reducing efficiency and prolonging treatment. 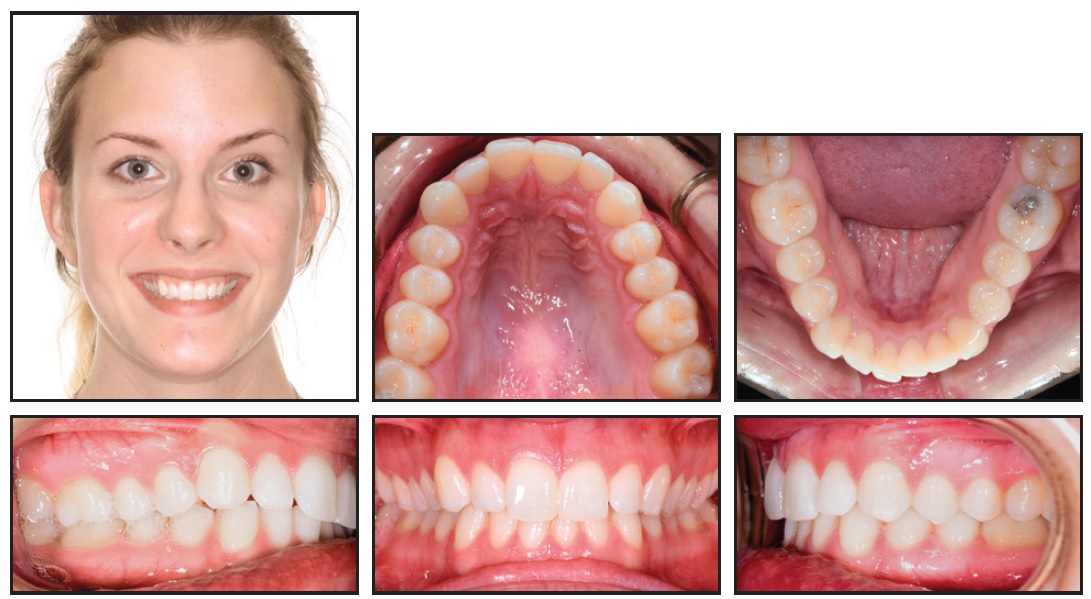 Examination found a lower midline shifted 2mm to the right; mild crowding in both arches; an asymmetrical, skewed upper archform; and lips that were slightly retrusive relative to the E-line (Table 1). 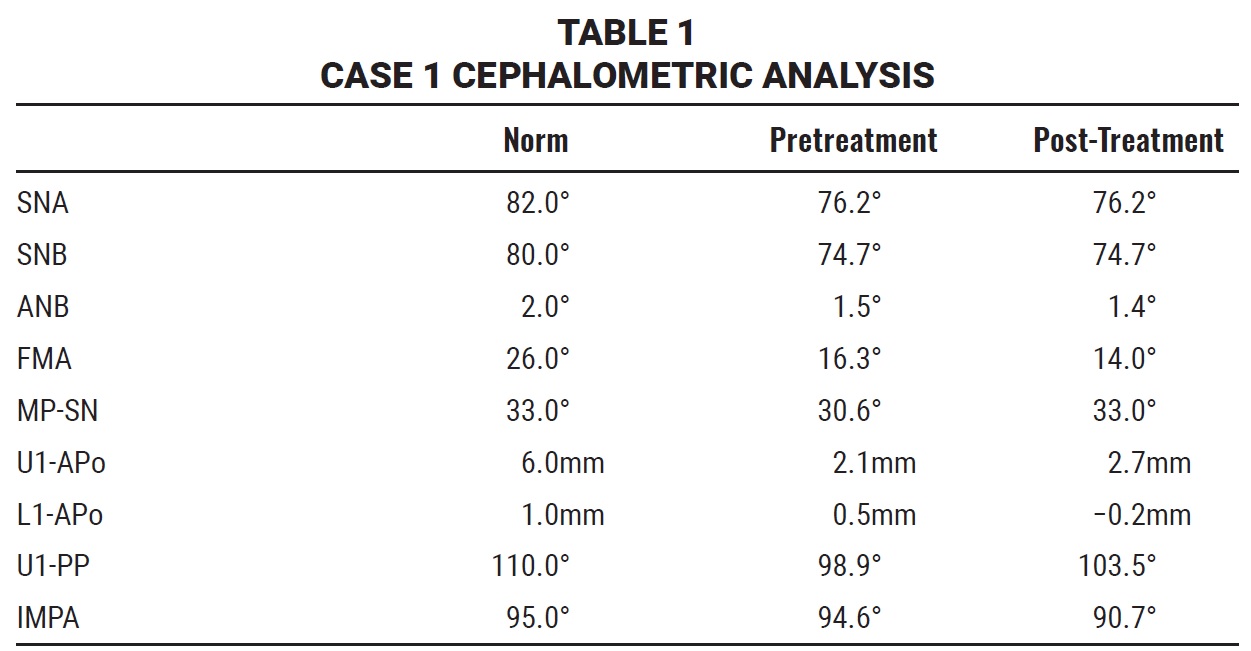 A good facial profile and balance were noted, along with normal upper incisor positions and lingual tipping in the buccal segments. The molar and canine relationships were diagnosed as Class I on the left and one-fourth- to one-half-unit Class II on the right.

Treatment goals were to resolve the deep bite, broaden and enhance both arches, correct the asymmetrical maxillary archform, and finish with Class I molar and canine relationships. The estimated treatment time was 18 months.

After five weeks of treatment, the upper right second molar was rebonded, and maxillary and mandibular archwires were changed to .018" × .025" SmartArch Copper NiTi (Fig. 6). The turbos remained in place.

A new panoramic x-ray was taken after 13 weeks of treatment, and the brackets were repositioned on the upper left central and lateral incisors, the upper right lateral incisor, and the lower right first molar.

After 20 weeks of treatment, the turbos were removed and Class II elastics (5⁄16", 2oz) were prescribed for full-time wear. The upper canine brackets were replaced with high-torque brackets, and elastic thread was placed across the four upper incisors to consolidate space.

The archwires were expanded after 29 weeks of treatment, and finishing and detailing bends were made to upright the lower left premolars. The Class II elastic was discontinued on the left side only, and a midline elastic was started from the lower right canine to the upper left canine. The archwires were recoordinated and expanded further after 33 weeks, with a finishing bend added for the lower right first premolar.

Fixed appliances were removed after a total treatment time of 35 weeks. Because the patient preferred Memotain‡ fixed retainers, a TRIOS†† scan was taken for fabrication of 2-2 maxillary and 3-3 mandibular retainer wires. In-house clear overlay retainers were delivered for full-time wear until the Memotain retainers could be bonded, four weeks later. Maxillary and mandibular Prezurv‡‡ clear overlay retainers were then delivered for nighttime wear. 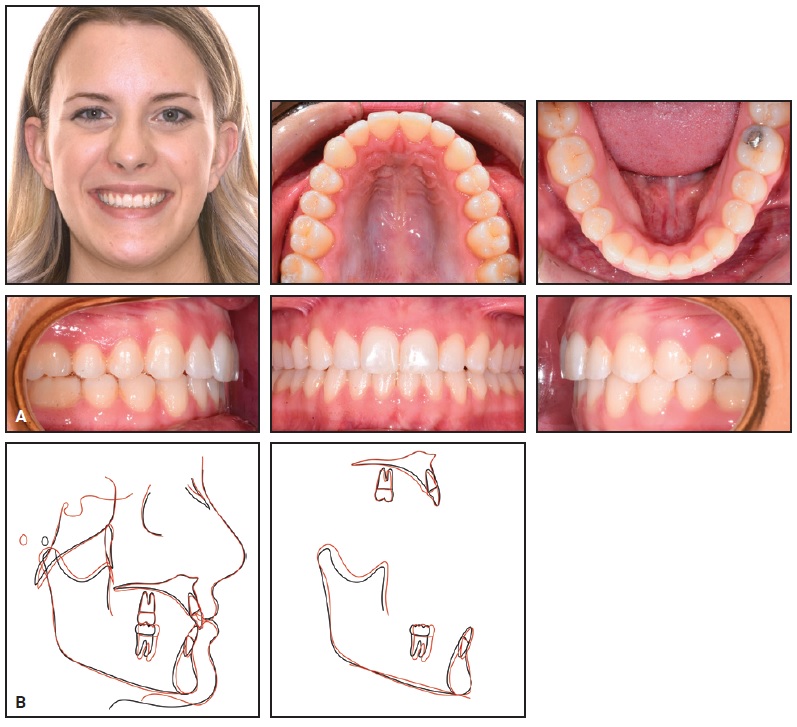 Fig. 8 Case 1. A. Patient after 35 weeks of treatment. B. Superimposition of pre- and post-treatment cephalometric tracings. 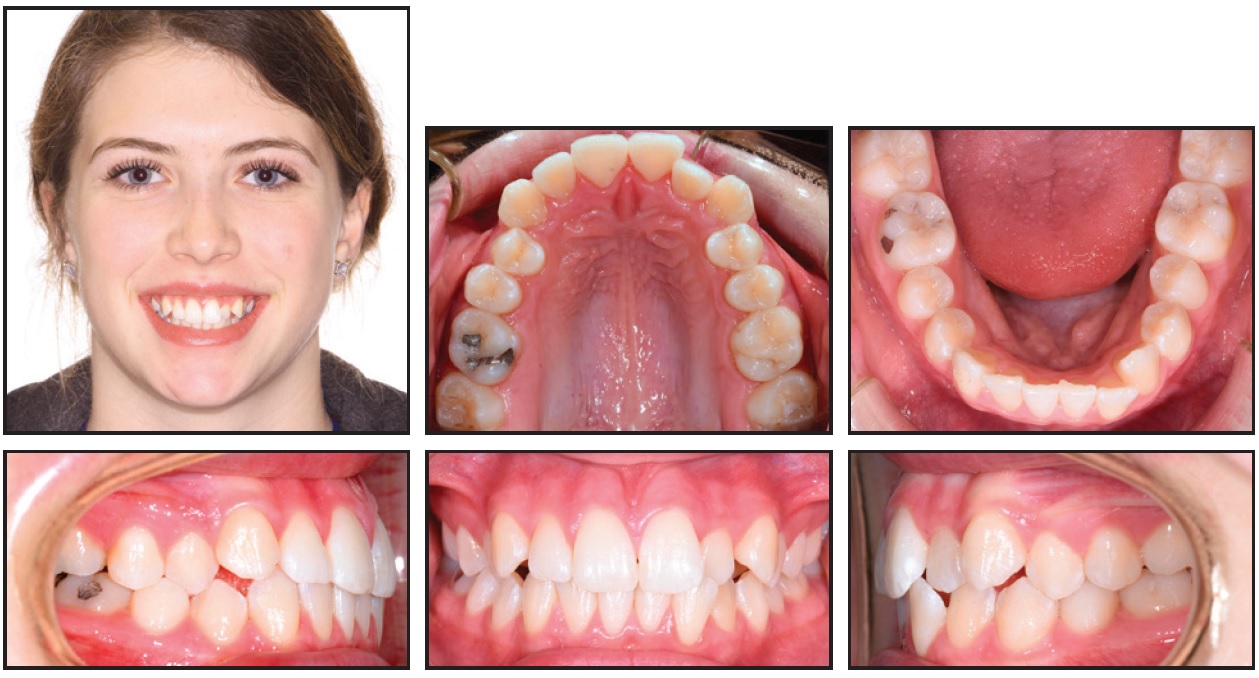 The examination showed an upper midline shifted 1mm to the left, moderate crowding in both arches, unilateral crossbites of the upper left lateral incisor and upper right first premolar, and lips that were slightly protrusive relative to the E-line. Good facial profile and balance were noted. The upper incisor positions were normal, but the buccal segments were lingually tipped. The patient was diagnosed with bilateral Class I molar and Class II canine relationships.

Our nonextraction treatment plan was to use Insignia* custom braces with anterior bite turbos and SmartArch .016" and .018" × .025" Copper NiTi archwires, followed by .021" × .025" Insignia custom Copper NiTi and .021" × .025" TMA wires. The goals were to level and align the dentition and correct the midline discrepancy.

Fixed appliances were bonded to all teeth in both arches, and .016" SmartArch Copper NiTi wires were placed (Fig. 10). Anterior bite turbos were bonded as in Case 1.

After 10 weeks of treatment, the crowding was resolved, crossbites were corrected, and midlines were coincident, but slight rotations remained (Fig. 11). New .018" × .025" SmartArch Copper NiTi wires were placed in both arches.

After 20 weeks of treatment, the rotations were corrected and proper alignment was achieved (Fig. 12). The bite turbos were removed, and .021" × .025" Insignia custom Copper NiTi archwires were placed for finishing in both arches. 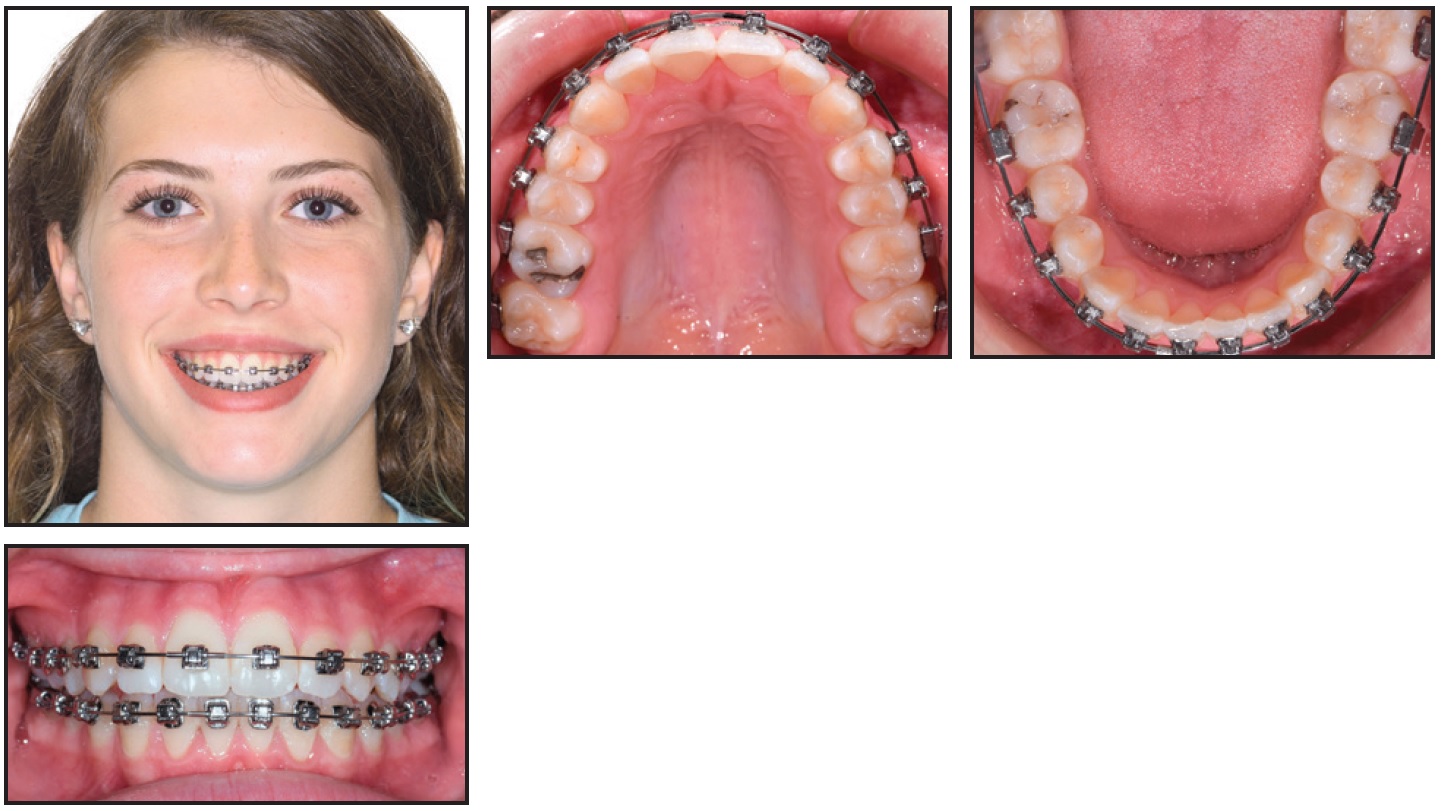 Case 1 demonstrates the efficiency that can be achieved when archwire technology is applied appropriately. Because the wires were allowed to express themselves without being removed and adjusted, we avoided the tendency to revert from a frontal resorptive pattern back into the lag phase, and the arches developed in a timely fashion.

The patient’s response to the SmartArch archwires was consistent with what I expected from an arch-development standpoint (Table 2). Still, a few subtle adjustments could have led to even greater clinical efficiency. The .018" × .025" archwires were placed at five weeks because of the loss of the upper right second molar bracket. I believe less undermining resorption would have been required if the initial archwire had been allowed another three weeks to work, potentially saving four to five weeks of treatment time. In addition, hooks were placed on the upper canines at 20 weeks for attachment of Class II elastics. This created an indeterminate mechanical situation, in which the amount and location of hyalinized PDL could not be determined. A better clinical approach might have been to wait for the posted stainless steel wires to be placed, thus creating a more efficient determinate system, before initiating elastic wear.

An additional benefit noted in this case was the lack of patient discomfort during treatment. Although every individual is different when it comes to pain, this patient’s only reported discomfort occurred when the elastic thread was placed.

Case 2 illustrates the combined efficiency of the SmartArch and Insignia systems. Accurate bracket placement, with appropriate forces applied to each tooth, created a synergistic biological response. We were able to insert finishing archwires for detailing and occlusal refinement after only five months of treatment.

The conventional wire progression—stepping through multiple rounds of progressively greater size and force—results in forces that overpower some teeth and underpower others. The value of this new wire technology lies in its capacity to apply physiologically appropriate forces to each individual tooth, thereby minimizing the formation of avascular necrotic tissue and shortening the lag phase. In each case shown here, SmartArch treatment appeared to minimize the lag phase, making coordinated tooth movement more efficient and leading to an estimated 50% savings in leveling and alignment time.

Based on the cases I have treated so far, it appears the best time to initiate treatment with these wires is upon full eruption of the second molars. Although SmartArch can be used with any bracket system, taking full advantage of the technology requires thoughtful treatment planning, accurate bracket placement, and careful observation before manipulating the bracket-wire system. 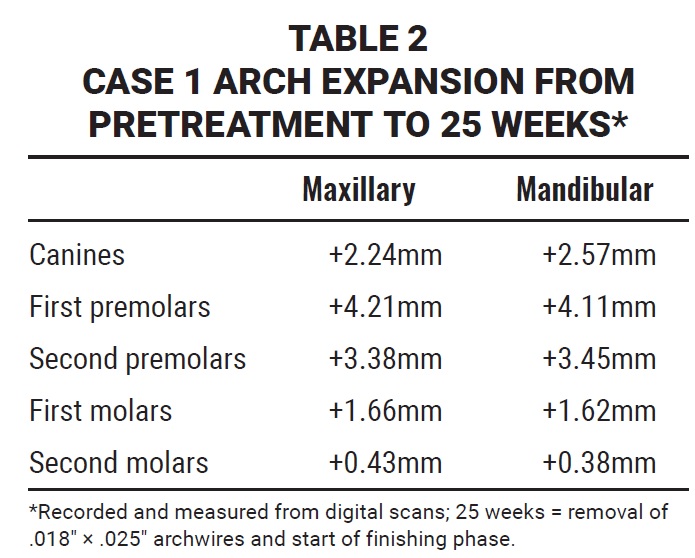 Dr. Olsen is in the private practice of orthodontics at Olsen Orthodontics, 1241 N. Transtech Way, Billings, MT 59102; e-mail: dr@olsenortho.com. He is a paid speaker for Ormco Corporation. 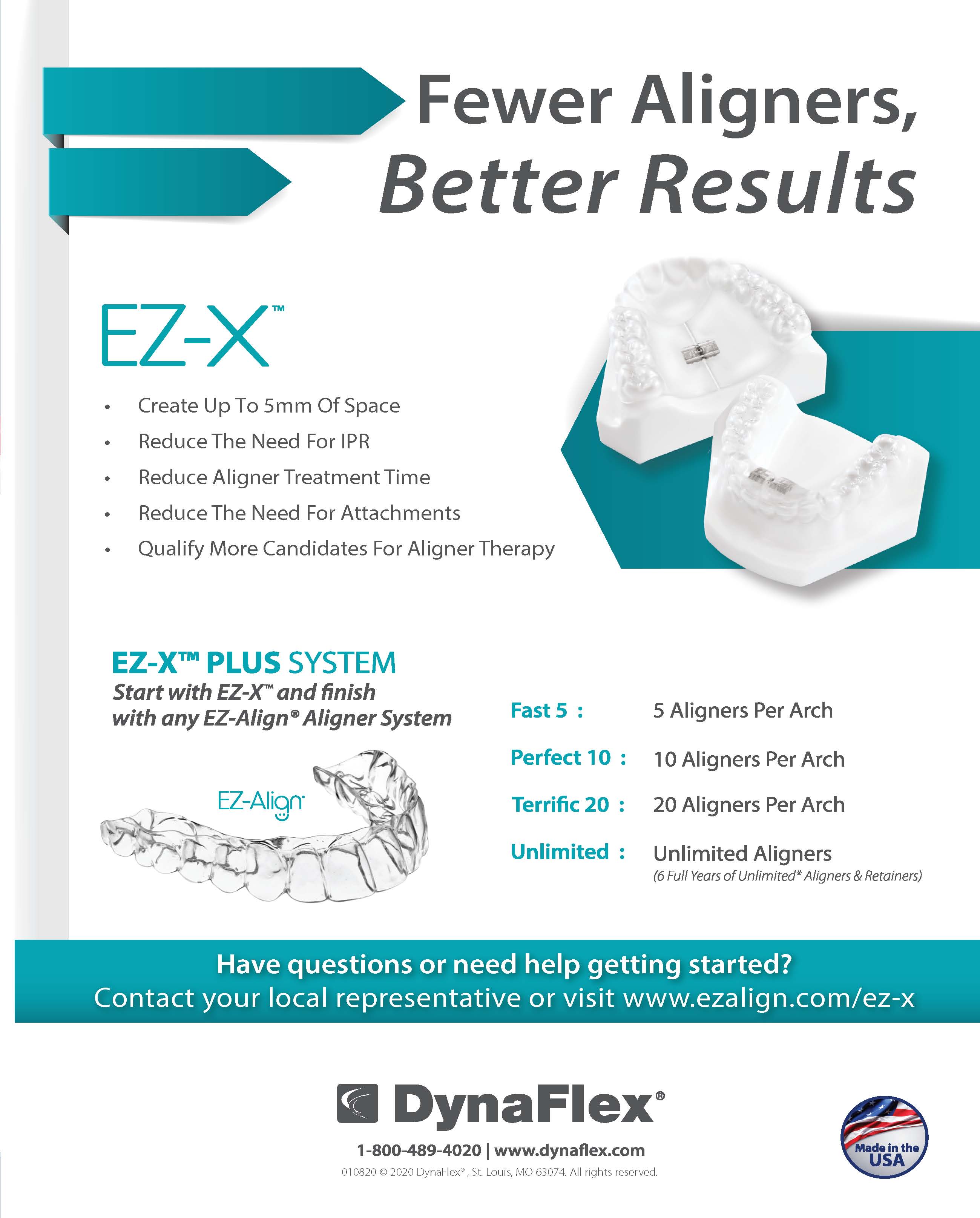 Fig. 2 A. SmartArch* wires produced with multiple memory material technology.17 B. As many as 10 levels of stiffness can be incorporated into a Copper NiTi** archwire. C. Key considerations include interbracket distances and stress on periodontal ligament (PDL).

Fig. 8 Case 1. A. Patient after 35 weeks of treatment. B. Superimposition of pre- and post-treatment cephalometric tracings. 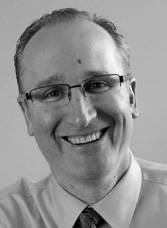