I became an avid reader of the Journal of Clinical Orthodontics when I first got interested in orthodontics in the mid-1980s, while practicing as a general dentist in my home state of New Mexico. The Editor of JCO was the charismatic and highly talented Dr. Larry White. I had become a friend of Larry’s shortly after I bought a practice in Roswell (yes, that Roswell), where Larry had a satellite office. I frequently met with him when he was in town on his monthly visits, since I saw his patients for minor issues—wire pokes, loose brackets, and similar emergencies—when he wasn’t in town. Larry always had several back issues of JCO with him on his trips, as he conducted most of his editorial tasks during the frequent, long drives between his many satellite offices. This was before the Internet (if can you even imagine that), so the writing and editing was done on real paper with real ink or pencil lead. I always read as many of the printed JCOs as I could. It was those discussions, those issues of JCO, and my friendship for and admiration of Larry White that eventually led me to become an orthodontist.

It was also during those visits that I first became acquainted with the writings of our Founding Editor, Dr. Eugene Gottlieb. Having maintained a keen interest in journalism since my high school days, I was fascinated by Gene’s concise, straightforward, no-nonsense writing style, which seemed similar to that of my lifelong writing idol, Ernest Hemingway. Perhaps the similarity stemmed from their common beginnings as newspapermen and sports writers. In any case, Gene became as much of a writing role model to me as Hemingway was.

In 1991, shortly after I became an orthodontist, Larry needed someone to write the many book reviews for JCO. Knowing my interest in journalism and writing, he asked me to take over the task. I jumped at the opportunity to join the editorial board, and I worked my way up the ranks of Contributing and Associate editorships. When Larry decided to move on to other opportunities in 2002, I applied for the position of Editor. Apparently, Dr. Gottlieb liked the work I had been doing over the preceding 11 years, so I was invited to the home office of JCO, which was in Boulder, Colorado. To me, that was essentially being summoned to an audience with my greatest career hero. I could not have been more nervous. David Vogels, our Managing Editor at the time, asked most of the questions, while Gene sat without speaking, staring at me in an all-encompassing evaluation. One of the questions Mr. Vogels posed was, “What changes would you make to the editorial direction of JCO?” Thinking on my feet, I blurted out something about transforming JCO into the premier “translational research” orthodontic journal in the world. At the time, I was still lost in the quagmire of academia at the University of Southern California Department of Orthodontics, so a response like that was almost automatic on my part. After the questions and answers, Gene and David stepped into the other room for an interminable time, then returned to thrill me with the announcement that I had the job. It was at that moment, at the very the end of the interview, that Gene looked me square in the eye and said in no uncertain terms, “There will be no change in the editorial direction of the journal.” So much for thinking on my feet.

In the intervening 17 years, JCO has become my second family, and I have made lifetime friends and established significant lifelong collaborations worldwide. Throughout, Gene remained my greatest mentor, severest critic, and most admired professional idol. Thank you, Gene. I miss you terribly.

We have asked other long-time contributors to JCO to send in any anecdotes and reminiscences they have of Gene for this memorial issue. If you have others, I would be delighted to read them; you can e-mail me at jco.editor1@gmail.com.

Editor’s Note: Eugene L. Gottlieb, Founding Editor of JCO, died on Oct. 11, 2018, at his home in Sedona, Arizona. For a complete biography, read the Editor’s Corner by David Vogels in the November 2018 JCO. This issue, at the start of what would have been his 100th year, is dedicated to Gene Gottlieb’s memory. The following tributes were received from other JCO editors and contributors by press time.

Gene was still a young man at 99, a curious orthodontist who was passionate about his profession, a permanent student with the enzyme of creativity, always intrigued about innovation and new horizons in orthodontics. The initial and forever active neuron of his JCO. On the human side, a wise man, humble in his relations with a fine sense of humor. A true gentleman. Rest In Peace.

I was very fortunate to meet Dr. Gottlieb when the Journal of Practical Orthodontics was first published. We got to be very good friends, and we had dinner or lunch every time we met at the AAO meeting. We went skiing, and sometimes swimming at his home. The first time I visited him in Sedona, he rented a small plane for me to visit the magnificent desert and the huge rock formations. I didn’t know he would do that, but he had planned ahead of time for the surprise at the airport. I was invited to his daughter’s wedding with David Vogels, which was absolutely unique. My father, Dr. Samuel Fastlicht, and my children also met him and his wife. He published some of my articles, and I have been very grateful always. May he rest in peace.

Gene was a rare individual indeed, and it’s been wonderful reading and looking back at his impact on so many orthodontists, including me. Dr. Gottlieb was an academician, innovator, futurist, clinician, communicator, thought leader, and master archivist. Gene will be missed, but his great legacy will persist.

I am saddened to hear about Gene’s passing. His support for making orthodontics a far better profession in his wake is matched by very few in orthodontics. Gene saw and actively participated in so much during his time, which is an inspiration to all of us. Please remember that many of us are far better people and clinicians because of Gene.

As one of your Asian friends, I want to show my deepest condolences to Dr. Gottlieb and his family and to all the JCO fans. You all gave us insight into orthodontics for my patients. RIP, my friend.

I am very sorry to hear of the passing of Dr. Gottlieb. Dr. and Mrs. Gottlieb visited Japan in 1982 and enjoyed Japanese life. Our school, Tokyo Dental College, was using the Gottlieb Grading Analysis (which we named GGA) for resident case grading. We appreciate his great contribution to orthodontics.

My wife Charlene and I are saddened by hearing about the passing of Gene Gottlieb. I have many fond memories of Gene that go back to the late 1970s. Gene was very supportive of JCO Seminars, an opportunity for me not only to teach broadly but also to form lifelong bonds with many of the commercial folks who attended those meetings (David and Cindy Vogels, Paul Gange, John Jankowiak, Max Hall, Paula Allen, Dan Riegelman, and Jim Juencker, just to name a few). What a great experience for a then-young guy.

Gene also interviewed me in 1982 for a two-part series on the Fränkel appliance that appeared in JCO. He always was a curious guy, and I enjoyed talking with him whenever we met.

Gene Gottlieb had a life well lived. Thanks for being a part of my life, Gene.

We have lost our chief Editor, Gene Gottlieb. I have been affiliated with JCO for a number of years and have always admired the interest and engagement of “the old man.” He lived an active life and had the fortune of seeing the journal he had initiated continuing with active contributions from both his family and engaged colleagues from all over the world. A special contribution to the memory of Dr. Gottlieb was the introduction of the Eugene L. Gottlieb JCO Student of the Year, an award introduced three years ago with the purpose of encouraging excellence in clinical orthodontics. To reach Dr. Gottlieb’s age, still be active, and not have to suffer severe illness is what we all want. He will be remembered by all of us who had the fortune of meeting him. I am grateful I was one of them. Let us pay tribute to his memory.

I sent the message below to the orthodontic department chairs in the United States and Canada. I received 90 condolence e-mails from the orthodontic chairs and program directors.

Dear Colleagues, I would like to express my sincere condolences on the passing of Dr. Eugene L. Gottlieb. It is a great loss to our specialty, and we really appreciate his contribution to our profession. He will be greatly missed and remembered.

Here at the University of Connecticut, we are saddened with the news. Please pass on our condolences to the Gottlieb family. He will be truly missed by our profession.

My memories of Gene are extremely fond; in a strange way we were really close, although we did not meet often. He was always kind to me and supported me from the early start of my adventure in orthodontics, to the end. He sponsored and promoted me in several JCO interviews over a long period. He was also important in developing and organizing our JCO Seminars years ago.

I believe he realized himself his importance in our profession, following his dreams to edit, write, and supervise a superb clinical orthodontic journal. He did that throughout his life, even until the very last, which is truly amazing. His friendship and human warmth will be fond memories forever. 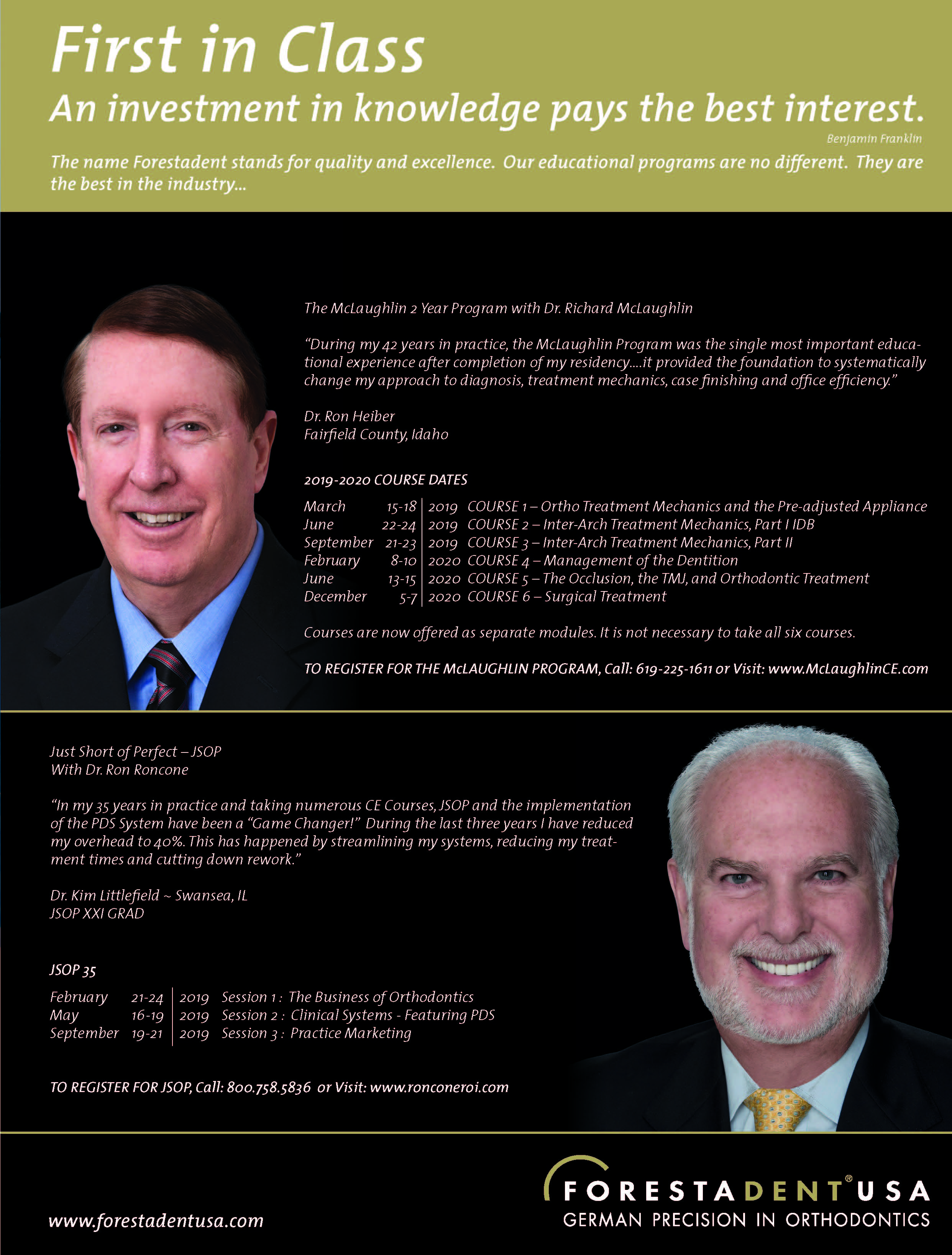