Congenitally missing upper lateral incisors are among the most common tooth-agenesis abnormalities.1 Treatment options generally involve space opening for implants or fixed bridges2,3 or space closure for canine substitution.4,5 Skeletal discrepancies must also be considered, however, since congenitally missing anterior teeth can contribute to an underdeveloped maxilla and a consequent skeletal Class III relationship.6 Space closure may create or exacerbate a negative anterior overjet, requiring functional appliances or skeletal anchorage to protract the posterior teeth.7,8 On the other hand, space opening for future prostheses has its own challenges in terms of achieving and maintaining a positive overjet.

In a patient with negative anterior overjet and missing upper lateral incisors, one of the goals of orthodontic treatment should be to achieve a positive overjet as quickly as possible, thus minimizing patient discomfort. Techniques like corticotomy and alveolar distraction osteogenesis can be used to accelerate and complete difficult tooth movements.9,10 A less invasive approach, micro-osteoperforation, has also been proposed to accelerate tooth movement.11

The following case shows how micro-osteoperforations can be used during the initial stage of proclination and protrusion of the upper central incisors to correct a negative anterior overjet and create space for future restorations.

A 12-year-old female presented with the chief complaint of an anterior crossbite. All permanent teeth had erupted except the upper second molars; the upper lateral incisors were congenitally missing (Fig. 1). 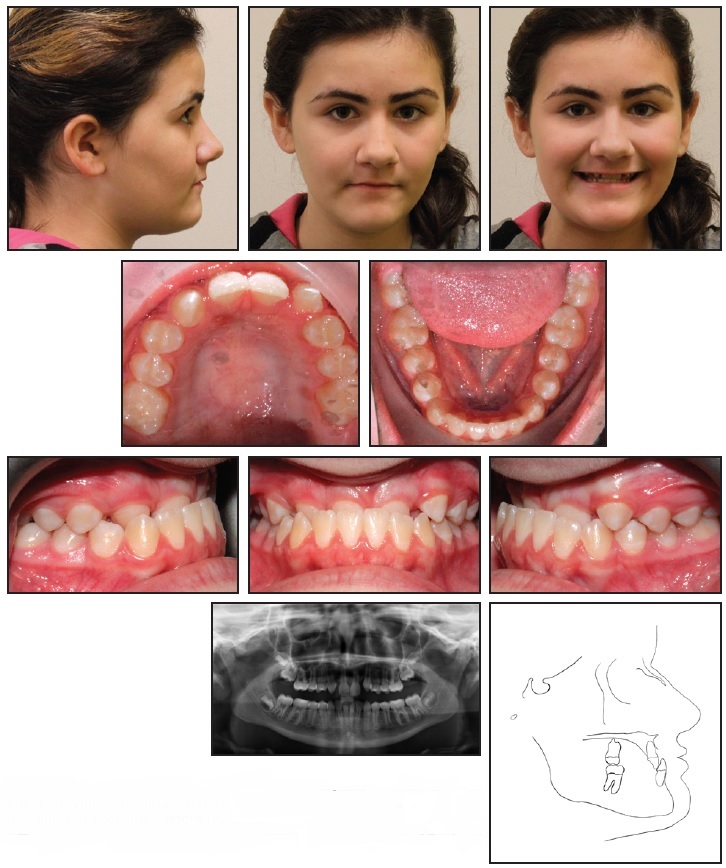 The patient had a bilateral Class I molar relationship and a Class I canine relationship on the left, with 7mm of spacing in the maxillary arch and 1mm of crowding in the mandibular arch. The anterior overjet was -3mm. The upper right canine had drifted mesially and palatally, and there was a posterior crossbite. A midfacial skeletal deficiency was evident from the frontal and lateral views. Cephalometric analysis confirmed a skeletal Class III relationship, with the upper central incisors retroclined and retruded and the lower incisors retroclined (Table 1).

We presented two treatment options. The first was to postpone treatment until growth was complete and then use canine substitution to replace the missing lateral incisors, followed by orthognathic surgery to address the skeletal deficiency. The molars would finish in a Class II relationship. The second option was to create space to replace the missing lateral incisors and camouflage the skeletal Class III by proclining and protruding the upper central incisors. Micro-osteoperforations would be performed to accelerate correction of the negative anterior overjet. 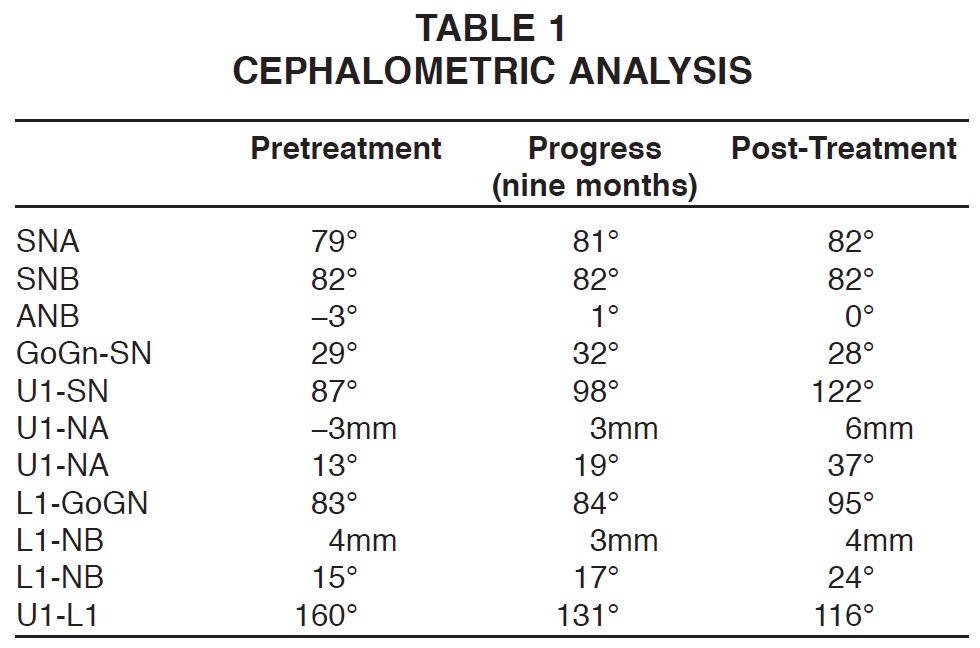 Because the patient's social life and self-esteem were significantly impacted by her present smile, and her parents expressed financial concerns regarding orthognathic surgery, we selected the second treatment option.

Under local anesthesia, three micro-osteoperforations were performed distal to the upper central incisors on each side, at a depth of 5mm, using a Propel** micro-osteoperforation device (Fig. 2). The patient was asked to rinse with .12% chlorohexidine gluconate prior to the procedure. No flap was made, and no antibiotics or analgesics were prescribed. The patient did not report any postoperative discomfort.

An edge-to-edge bite was achieved in two months (Fig. 3A), and the bite blocks were removed. Cephalometric analysis indicated a 6mm protrusion and some proclination of the upper central incisors (Fig. 3B, Table 1). 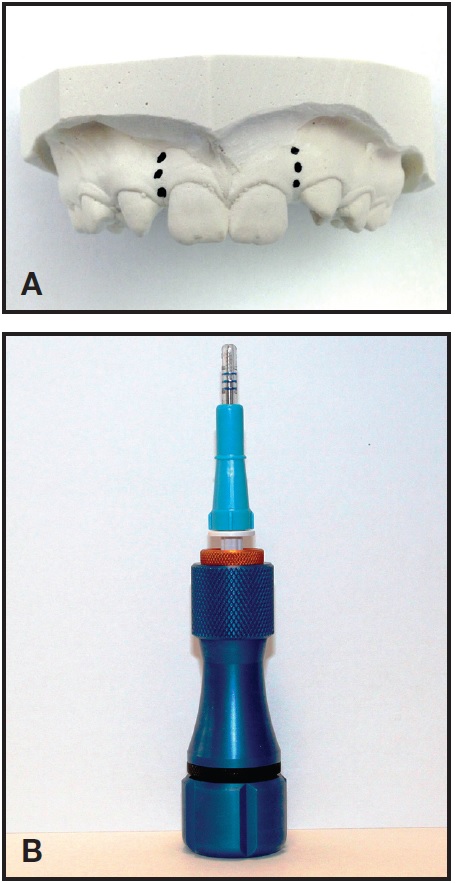 Two months later, the upper archwire was changed to continuous .016" × .022" stainless steel, with open-coil springs between the upper central incisors and canines to widen the spaces of the missing lateral incisors. The lower archwire was increased in size to .016" nickel titanium, followed by a sequence of .016" × .022" nickel titanium and stainless steel.

After 21 months of treatment, the case was finished with .017" × .025" stainless steel archwires and Class III intermaxillary elastics. Appliances were removed after 26 months of treatment, and Hawley retainers with pontics for the upper lateral incisors were delivered, along with Essix*** retainers for a more esthetic alternative.

The vertical dimension was well maintained throughout treatment. The patient finished with bilateral Class I canine and molar relationships, a 1mm overjet, and 10% overbite (Fig. 4A). Superimposition of cephalometric tracings indicated proclination and protrusion of the upper central incisors and some proclination of the lower incisors (Fig. 4B, Table 1). 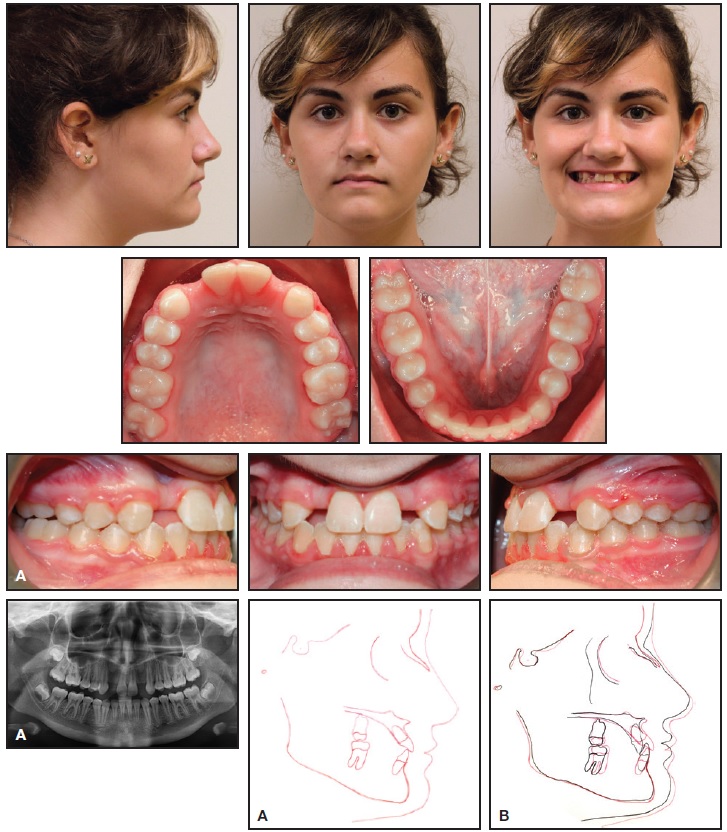 Fig. 4 A. Patient after 26 months of treatment. B. Superimposition of pre- and post-treatment cephalometric tracings. 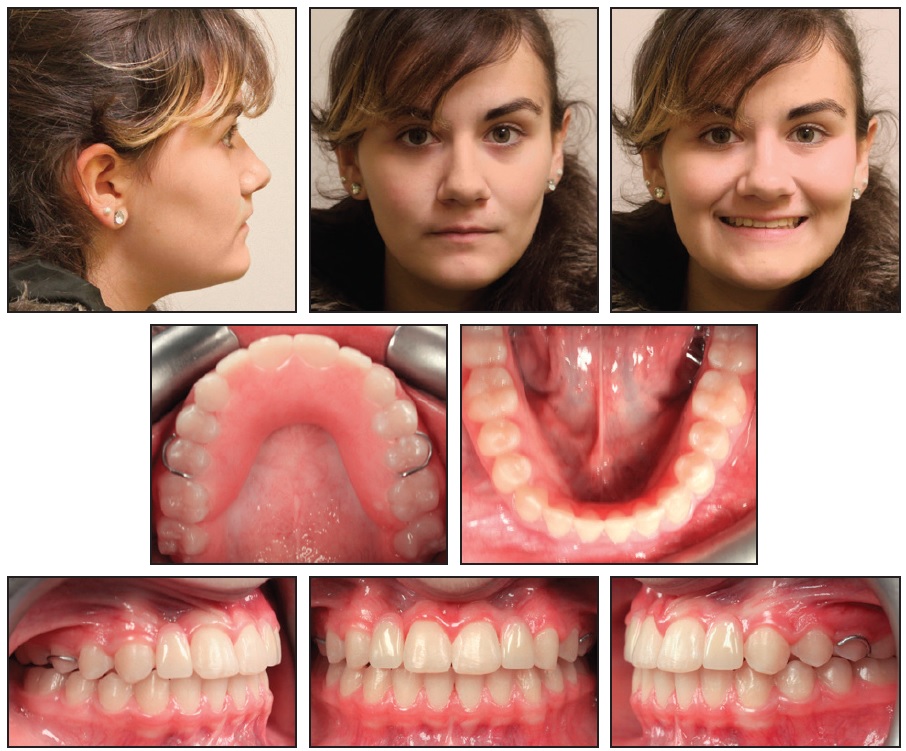 Treating a patient with missing upper lateral incisors and a maxillary skeletal deficiency can be challenging. Once the decision has been made to create space for a future prosthesis rather than performing canine substitution, it is crucial to achieve and maintain a positive overjet. Accelerating treatment during this stage will reduce patient discomfort and the number of visits required.

Because tooth movement is an inflammatory mediated response,12 enhancing the inflammatory process can accelerate the movement.13-15 Kook and colleagues described how corticotomies can help achieve such difficult tooth movements as bodily protraction of lower molars16; Wilcko and colleagues developed a surgical method involving corticotomies and grafting to accelerate orthodontic movement.17 These and other corticotomy techniques that require mucoperiosteal flap surgery are relatively invasive, however, and may require specialized training and additional chairtime.

Micro-osteoperforation is a safe and less invasive alternative. In a randomized clinical trial, micro-osteoperforations increased the expression of inflammatory markers associated with orthodontic tooth movement, thus increasing the rate of upper-canine retraction. The authors noted no significant difference in patient pain and discomfort whether micro-osteoperforations were used or not.11 Further studies are needed to investigate the effects of different depths, numbers, and frequencies of microosteoperforations in improving the efficiency of space-gaining treatment for patients with missing upper lateral incisors.

Dr. Raptis is in the private practice of orthodontics at 670 East Road, Bristol, CT 06010; e-mail: markos79@hotmail.com.

Fig. 4 A. Patient after 26 months of treatment. B. Superimposition of pre- and post-treatment cephalometric tracings.

Dr. Raptis is in the private practice of orthodontics at 670 East Road, Bristol, CT 06010; e-mail: markos79@hotmail.com.