The frequency of malocclusions in adults is equal to or greater than that observed in children and adolescents.1 Crowding and spacing are among the most common problems in adults, with crowding affecting about 24% of women and 14% of men, and spacing found in 8% of women and 13% of men.1

Despite their need for orthodontic treatment, however, adults are often averse to wearing traditional fixed appliances with wires, bands, and brackets. The Invisalign System now makes it possible for orthodontists to offer adult patients requiring fullmouth orthodontic treatment an esthetically agreeable solution, using a computer-assisted technology that produces a series of clear plastic overlays.

Clear plastic overlay appliances take a variety of forms, including retainers,2-4 night guards, TMJ splints, and bleaching trays. Although such appliances have sometimes been used for minor tooth movement,2-5 this has traditionally required a dental technician to manually reset the teeth on a plaster model and form an overlay appliance to fit each stage of treatment. Cases involving many treatment stages have therefore required extensive manual labor, which is both costly and vulnerable to human error and inaccuracies.

Recent developments in technology have now made it possible, with the Invisalign System, to take a single impression of a patient's dentition, and use that to:

We initiated a feasibility study of the Invisalign appliance at the University of the Pacific more than two years ago. Initially, we started 10 patients with relatively uncomplicated malocclu­sions involving mildto-moderate crowding and space closure, as shown in this report. Based on our success with those initial cases, we then started treatment on 30 additional patients with more complex orthodontic problems, including dental expansion, Class II and Class III correc­tion, and various types of extraction treatment. These cases are now nearing completion and will be reviewed in a later publication.

Align Technology also selected about 25 private orthodontic practices to serve as additional initialfeasibility test sites for the Invisalign System. Because the technology is still being developed, corporate policy has been to allow only qualified orthodontists to partici­pate in the use of the appliances.

A candidate for orthodontic treatment with the Invisalign System should have fully erupted permanent teeth, with growth completed. There is no age requirement, but the ability to comply with the treatment regimen of nearly fulltime wear is mandatory.

Once a patient is determined to be a good candidate for Invisalign treatment, the usual orthodontic records are taken, including study casts, photographs, and radiographs. Polyvinyl­siloxane impression material must be used, because it yields highly accurate impressions that remain stable for as long as three weeks and allow multiple pours.

The impressions and wax bite are sent to Align Technology with a detailed treatment­ planning form. Align Technology produces a three-dimensional computer image from the impressions and performs a "virtual treatment" using a proprietary software program. A graphic version of the treatment is then made available for the treating orthodontist to download from the Internet and view on a personal computer. If necessary, the clinician provides feedback on the proposed final position and intermediate tooth movements to Align Technology, and adjust­ments are made until the orthodontist is satisfied with the treatment plan and prospective results.

Once treatment is approved, Align Tech­nology fabricates a set of clear plastic aligners, each about .030" thick. Each pair of upper and lower aligners in the series (single-arch treatment is also an option) incorporates a small adjust­ment, allowing for .25-.33mm of movement. The number of aligners per patient depends on the number of stages required to complete the treat­ment.

The aligners are sent to the orthodontist, who delivers them to the patient with instructions for use. The overlays should be worn 20-22 hours per day and removed only for eating, drinking, and toothbrushing or flossing. The patient wears each pair of aligners for one to two weeks before moving on to the next pair in the series. These appliances are disposable and virtu­ally undetectable from about two feet away.

Four completed cases are presented here, two requiring space closure and two involving mild crowding. The photographs were made from original prints taken by a commercial orthodontic laboratory (Cases 1 and 2) or copied directly from 35mm slides (Cases 3 and 4). They were not digitally altered in any way.

A 23-year-old female presented with the chief concern of spacing between the teeth. She was diagnosed with multiple upper and lower diastemas (Fig. 1). Starting with impressions of her teeth, Align Technology used the Invisalign System to create a computerized three-dimen­sional image of her teeth (Fig. 2) and then, fol­lowing the treatment plan, to generate a series of images that showed the spaces closing from the initial, untreated state to the final, treated state. Align then produced a series of aligners to match the desired stages of tooth movement (Fig. 3).

A 33-year-old male was diagnosed with multiple upper and lower diastemas (Fig. 4). Treatment was aimed at closing the spaces between the teeth, using aligners (Fig. 5). After nine months, space closure was achieved successfully, despite some root tipping that occurred around the mandibular central incisors (Fig. 6).

A 38-year-old female presented with crowding in both arches (Fig. 10). The treatment plan involved reproximation and minor tooth movement. Impressions were used to generate the computerized three-dimensional models of both arches (Fig. 11). After eight months of treatment with the Invisalign System, the maxillary lateral incisors could perhaps have been rotated slightly more, but the overall crowding was alleviated (Fig. 12).

In 1945, Kesling published the first article on the use of elastic positioners to move teeth that had been realigned in a wax setup.6 He realized that the lab requirements would be significant, and did not envision this as a practical means of more extensive treatment. He did have the foresight, however, to state that the technology would some day be available to make such treatment possible.6 The technology described in this article fulfills Kesling's vision.

The Invisalign System also addresses the needs of many adult patients by providing an alternative to fixed appliances in appropriate cases. Aligners offer several advantages over conventional fixed appliances: First, they are clear, and therefore more esthetically acceptable, particularly for adults. Also, aligners are generally more comfortable to wear, and they are removable, allowing better oral hygiene.3,4,7

Because a high degree of compliance is needed for this system to be effective, the Invisalign System is currently recommended only for adults. Adolescents with fully erupted permanent teeth (except third molars) may also be candidates for this approach, as long as they have been screened for compliance.

The Invisalign System has several potential disadvantages. Some patients may not wear the aligners enough for treatment to be effective. Being removable and clear, they may also be lost, although a study of 40 patients, comparing clear Essix retainers to conventional Hawley retainers, did not find a statistical difference in the numbers of people losing either type of appliance. 7 Due to occlusal coverage, slight (1/4- 1/2mm) posterior tooth intrusion may occur. This is generally dealt with in the retention period, which allows for settling when these teeth are free to erupt into occlusal contact.

The Invisalign System has opened up a new area of adult orthodontics, serving patients who may not want conventional fixed appliances or for whom traditional removable appliances may be unsuccessful.

ACKNOWLEDGMENTS: The assistance of Sharon Welner, PhD, of BioMedCom Consultants, Inc., Montreal, Canada, in writing the manuscript is gratefully acknowledged. 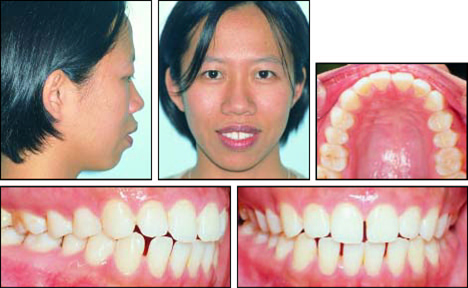 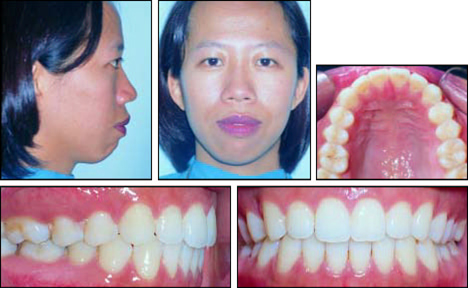 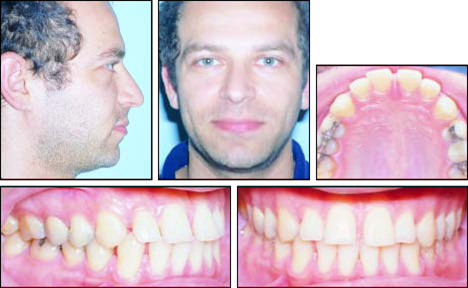 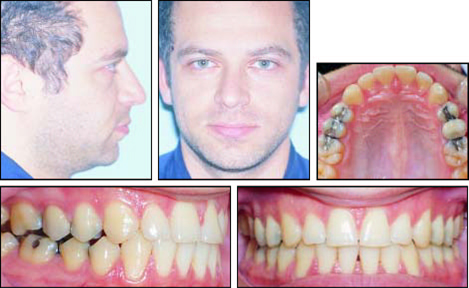 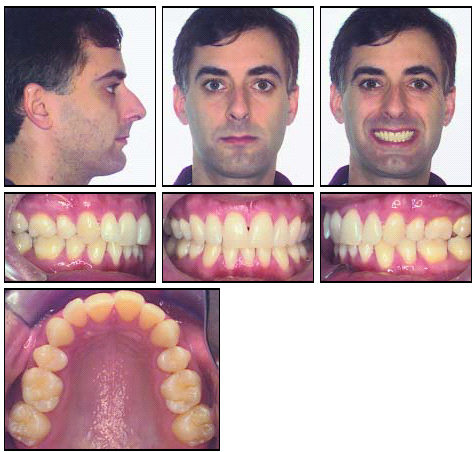 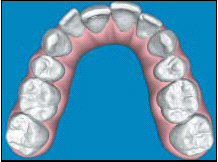 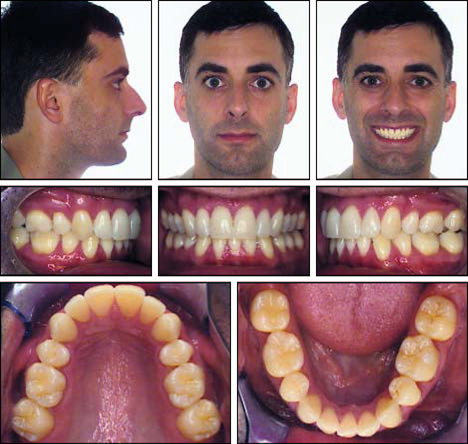 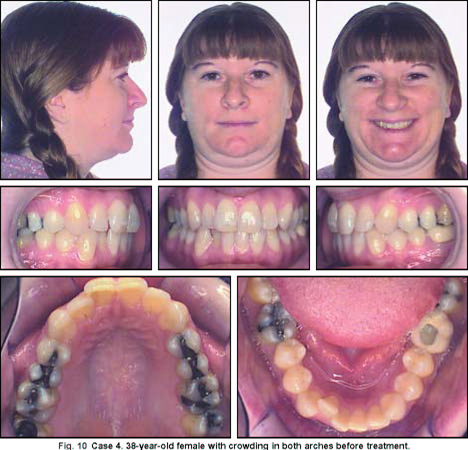 Fig. 10 Case 4. 38-year-old female with crowding in both arches before treatment. 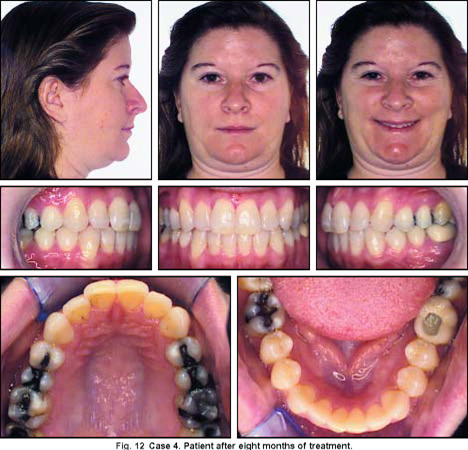 Dr. Boyd is a Diplomate of the American Board of Orthodontics and Professor and Chairperson, Department of Orthodontics, School of Dentistry, University of the Pacific, San Francisco, CA 94115.

Dr. Vlaskalic is an Assistant Clinical Profes­sor, Department of Orthodontics, School of Dentistry, Universi­ty of the Pacific. Drs. Boyd and Vlaskalic were compensated for their efforts in the conduct of this study (but do not own stock in the company).