Open bite is one of the most difficult malocclusions to treat because its etiology is multifactorial, involving both genetic and environmental factors.1-6 Dental open bite, generally restricted to the canines and incisors, is associated with a balanced facial pattern, undererupted anterior teeth, normal or slightly excessive molar height, and sucking habits.2,6 Skeletal open bite is often characterized by excessive lower anterior facial height and upper molar height, divergence between the palatal and mandibular planes and the maxillary and mandibular occlusal planes, clockwise mandibular rotation, an excessive mandibular-­plane angle, and mesial angulation of the posterior teeth.2,6-10 Most open-bite patients present some degree of dental and skeletal imbalance.4-6,8,11

The choice of an orthodontic treatment modality for open-bite correction depends on the causative factors, the degree of dental and skeletal involvement, the patient’s growth potential, the patient’s self-perception and expectations, the anticipated compliance level, the biological and financial costs of treatment, and the clinician’s skill.2,5,6,12,13 Nonsurgical options for late adolescent and adult patients include vertical anterior elastics, designed to achieve anterior extrusion, maxillary incisor uprighting, and some uprighting of the mandibular posterior teeth2,3,5,14-21; the multi­loop edgewise archwire (MEAW) technique, which produces posterior uprighting, occlusal-­plane rotation, anterior extrusion, and some posterior intrusion5,19,20; an extrusion arch for anterior extrusion and mesial tipping of the posterior teeth22; or skeletal anchorage from mini-implants or miniplates, aimed at molar intrusion and occlusal-­plane alteration.12,23-29 The dento­alveolar effects of these protocols cannot be calibrated, however, to suit a particular patient’s needs. Moreover, patient compliance is critical when vertical anterior elastics or removable appliances such as high-pull headgear or active vertical correctors are used.7,27,30-32

The Dual Action Vertical Intra-Arch Technique (DAVIT) was designed to simultaneously produce posterior intrusion and anterior extrusion in open-bite treatment, without the need for patient cooperation. A “davit” is a small crane-like device with a pair of power arms for suspending or lowering loads on ships, corresponding to the design and action of this new orthodontic appliance (Fig. 1).

The DAVIT is fabricated by making six right-angle bends in an .017" × .025" TMA wire, resulting in a horizontal anchorage segment, two vertical extensions, and two horizontal power arms with vertical plugs at the ends (Fig. 2A). The horizontal anchorage segment is fitted into the slot of a bracket-head mini-implant, while the vertical plugs of the horizontal power arms are inserted into the vertical slots of orthodontic cross-tubes positioned between the lateral incisor and canine and the first and second molars (Fig. 2B).

Before beginning vertical mechanics with the DAVIT, all teeth should be aligned and the interproximal contacts closed, with an .019" × .025" stainless steel archwire in place. The DAVIT is initially inserted into the slot of the mini-implant head to program its clinical action. If the horizontal arms are level with the archwire, the device is considered passive (Fig. 3A). If either arm is apical to the archwire, it is activated for intrusion in this segment (Fig. 3B). If an arm is occlusal to the archwire, it is activated for extrusion.

Thus, equal or opposite tooth-movement directions can be obtained in each DAVIT segment, allowing different rates of vertical movement (intrusion or extrusion) to meet the patient’s specific needs. An open bite can be closed with predominantly posterior or predominantly anterior extrusion, or with a balanced combination of the two. This dual vertical action seems to greatly improve the efficiency of open-bite correction. In addition, the DAVIT can be used in both arches—especially in more severe open-bite cases—to further enhance its efficiency, since posterior intrusion and anterior extrusion can be performed simultaneously in both arches (Fig. 4).

Fig. 4 A. DAVIT appliance activated for posterior intrusion and anterior extrusion in both arches. B. Dual action (intrusion and extrusion) can further improve efficiency of open-bite correction.

The mini-implant is positioned between the premolars and about 12mm apical to the occlusal plane, close to the center of resistance of the dental arch.33 When posterior intrusive and anterior extrusive forces are simultaneously applied from this point, a moment is created to rotate the arch around its center of resistance.33,34 This is because a group of teeth joined together by a stiff archwire will rotate around a point approximating the combined center of resistance.33 Anterior extrusion, posterior intrusion, occlusal-plane rotation, and posterior uprighting occur simultaneously, without unwanted dental side effects (Fig. 5).5,10,16,19,27

A 13-year-old female presented with the chief complaint of an anterior open bite (Fig. 6). 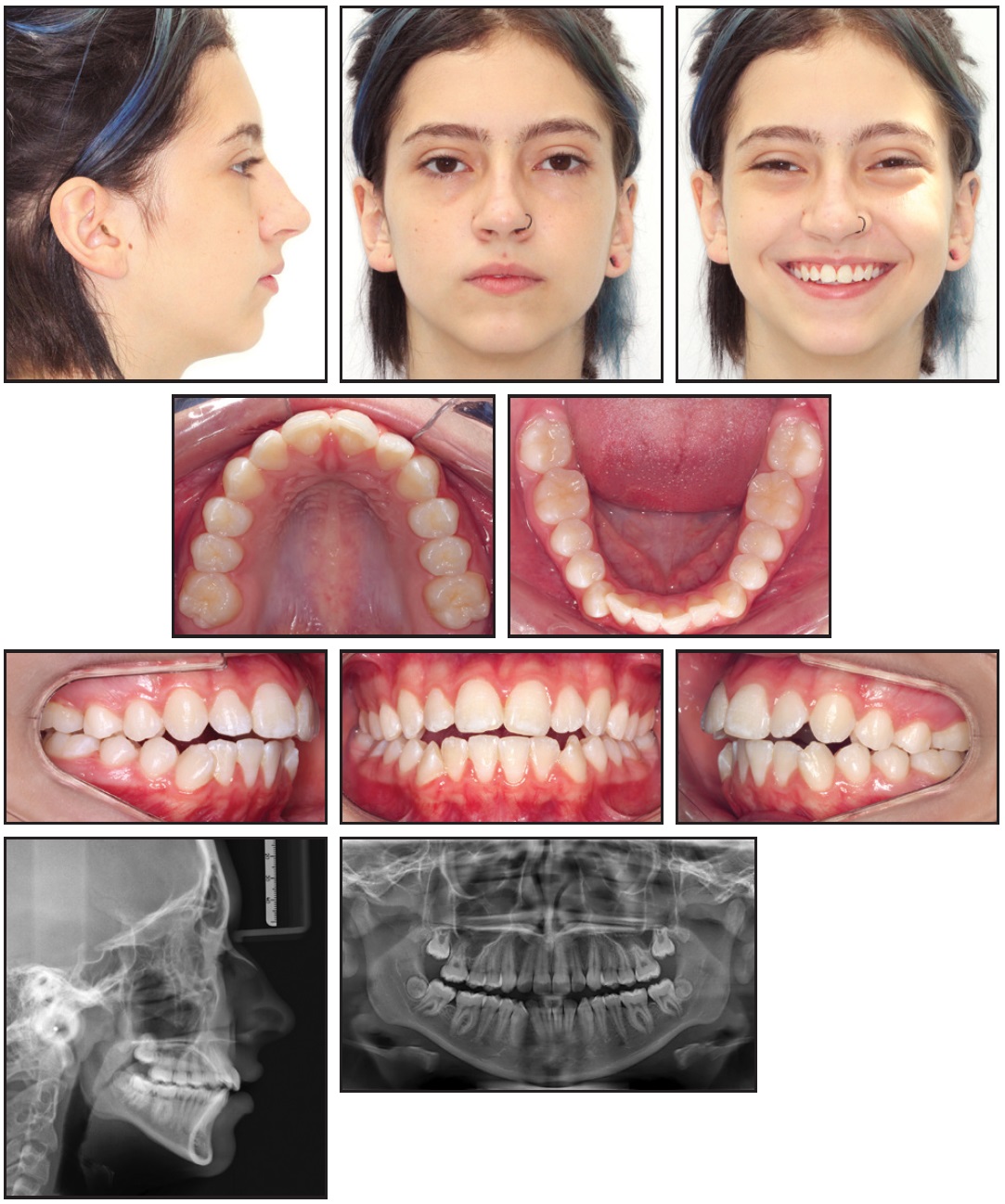 Clinical examination confirmed an anterior open bite extending from first premolar to first pre­molar, a bilateral Class I molar relationship, moderate lower anterior crowding, and excessive overjet. The panoramic radiograph revealed the presence of unerupted upper second and lower third molars and agenesis of the upper third molars. The upper second molars were favorably positioned for later eruption,36 with incomplete rhizogenesis (Fig. 6B). There was no deviation between centric occlusion and centric relation, and there were no signs of TMD. Cephalometric analysis found an anteroposterior maxillomandibular discrepancy with mandibular deficiency, a slightly vertical growth pattern with an excessive mandibular-­plane angle, and a convex skeletal profile. The upper incisors were slightly protrusive, but the lower incisors were well positioned.

The DAVIT device was chosen for treatment because the patient’s vertical facial pattern and smile esthetics were favorable for open-bite closure by simultaneous posterior intrusion and anterior extrusion, and because compliance with removable appliances was unpredictable.37

After seven months of treatment, the initial alignment was complete. A bracket-head mini-­implant (1.5mm × 8mm, with a 1mm transmucosal collar) was inserted on each side between the upper premolars to provide skeletal anchorage for the DAVIT device (Fig. 7). The right and left mini-implants had counterclockwise and clockwise thread directions, respectively, to prevent screw failure due to the rotational force load.35 The posterior power arms of the DAVIT were activated above the .019" × .025" alignment archwire to produce a posterior intrusive force of about 300g per side. The anterior power arms were activated below the archwire to produce an anterior extrusive force of about 150g on each side, for a total 300g of anterior extrusive force. The horizontal anchorage segments of the DAVIT were tied into the mini-implant bracket slots with .008" stainless steel ligature wire. Finally, the activated vertical plugs at the ends of the horizontal power arms were inserted into the vertical slots of orthodontic cross-tubes positioned between the lateral incisor and canine and between the second premolar and first molar on each side of the maxillary arch.

After two months of treatment with the DAVIT appliance, the open bite was completely closed and interocclusal contact between the premolars had substantially increased (Fig. 8).

To minimize the possibility of post-treatment relapse,38 however, the DAVIT was reactivated using the same protocol. Two months later, the desired overcorrection had been achieved (Fig. 9).

The DAVIT device was then kept passively in place for another two months to stabilize the dentoalveolar changes (Fig. 10).

Fig. 10 After two months of passive retention with DAVIT to stabilize changes.

Intermaxillary elastics were not prescribed to improve the overbite, posterior intercuspation, or anteroposterior relationship during the finishing phase. The fixed appliances and mini-implants were removed, and an upper Hawley and lower 3-3 fixed lingual retainer were placed for retention.

Fig. 11 A. Patient after 13 months of treatment (continued in next image).

Excellent smile esthetics and a static and functional occlusion were obtained. The upper incisors were extruded and palatally tipped, while the upper molars were intruded. The occlusal plane underwent clockwise rotation, and the upper posterior teeth were uprighted. Consequently, the anterior open bite was closed, the overbite was overcorrected, and occlusal contact was established between the premolars. The Class I molar relationship and the posterior transverse relationship were maintained. The lower incisors were protruded to resolve the anterior crowding. External apical root resorption involved no more than slight rounding, which is considered clinically acceptable.39 The upper second molars were erupting toward the occlusal plane, but the left second molar showed a less favorable eruption axis; therefore, the patient was kept under observation to evaluate whether surgical intervention would be required (Fig. 11B).

Fig. 11 (cont.) A. Patient after 13 months of treatment. B. Superimposition of pretreatment (black) and post-treatment (red) cephalometric tracings.

The DAVIT appliance is an excellent alternative to orthodontic mechanics based only on incisor extrusion. Extrusion of the upper incisors through palatal tipping is another DAVIT effect that contributes greatly to anterior open-bite correction by means of the “drawbridge effect.”2 Although this effect will be more evident in extraction cases, the patient’s soft-tissue profile may contraindicate such treatment, as in the case described here.

The MEAW technique can produce similar dentoalveolar effects to the DAVIT,5,19,20 but it still depends on patient compliance with vertical anterior elastics. Poor patient cooperation can lead to unwanted tooth movements such as anterior intrusion and proclination.5,7,19,31,42,43 MEAW also requires special training on the part of the clinician, and it does not allow the rate of posterior intrusion and anterior extrusion to be planned according to the specific needs of the patient.5,31,42,43 In the present case, the DAVIT was used to correct the open bite primarily by anterior extrusion, since it was not detrimental to the smile esthetics. Incisor extrusion is more easily obtained than molar intrusion, and extrusion is about four times less likely than intrusion to cause external apical root resorption.44,45

Considerable posterior intrusion can be achieved with mini-implant or miniplate anchorage, potentially avoiding surgery in nongrowing patients with severe skeletal open bites.23,24,27,28 In these situations, the DAVIT appliance can be activated to produce maximum posterior intrusion. If extrusion of the upper incisors will have a negative effect on the level of gingival exposure, the anterior power arms of the DAVIT should be activated to prevent this anterior extrusion during posterior intrusion.5,34 The DAVIT can also be used in the mandibular arch to obtain maximum posterior intrusion and anterior extrusion while preserving smile esthetics.26,34 Other appliances are available for active molar intrusion—including mag­netic bite blocks, rapid molar intruders, and high-pull headgear—but they are used mainly in the late mixed or early permanent dentition, and many are removable, requiring a high level of patient compliance.32,46-48

Although the dual action of the DAVIT promotes uprighting of the posterior teeth and occlusal-­plane rotation, which are beneficial in open-bite cases, there is about a .5mm change in the sagittal occlusal relationship for each degree of occlusal-plane rotation in either the downward and backward or upward and forward directions.33 Therefore, the initial sagittal occlusal relationship should be considered when planning open-bite correction. When the DAVIT appliance is used in the mandibular arch, it produces a counterclockwise rotation of the occlusal plane that can be helpful in correcting Class III occlusal relationships.33,34,49,50 Conversely, when the DAVIT is applied in the maxillary arch, it creates a clockwise rotation of the occlusal plane that can be beneficial in Class II correction.33 The vertical effect of the occlusal-plane rotation on smile esthetics should be carefully evaluated to determine whether anterior extrusion should be restrained by the anterior power arm of the DAVIT, modifying the center of rotation of the dental arch.

Although the DAVIT appliance was conceived primarily for anterior open-bite treatment, we believe it can also be successful in correcting a deep bite if the activation is modified to obtain anterior intrusion and/or posterior extrusion, according to the patient’s needs (Fig. 12). Further studies are underway to evaluate the effects of DAVIT in the correction of different vertical malocclusions.

Fig. 4 A. DAVIT appliance activated for posterior intrusion and anterior extrusion in both arches. B. Dual action (intrusion and extrusion) can further improve efficiency of open-bite correction.

Fig. 10 After two months of passive retention with DAVIT to stabilize changes.

Fig. 11A A. Patient after 13 months of treatment (continued in next image).

Fig. 11B (cont.) A. Patient after 13 months of treatment. B. Superimposition of pretreatment (black) and post-treatment (red) cephalometric tracings.