Management of a Calcifying Odontogenic Cyst with an Odontoma During Treatment of a Class II, Division 1 Malocclusion

A convex facial profile, marked lip protrusion, lip incompetence, and mentalis muscle strain are typically the chief esthetic complaints for Class II patients. To solve these problems in a growing patient, nonextraction treatment with growth modification from a functional appliance is often the treatment of choice. In a nongrowing patient, the amount of skeletal Class II discrepancy and the patient’s age and attitude will determine the treatment plan.

This report shows a nongrowing patient with a full-step Class II molar relationship in whom extraction of the upper first premolars was followed by camouflage therapy using temporary anchorage devices (TADs). Development of a calcifying odontogenic cyst with an odontoma further complicated treatment.

A 15-year-old female presented with the chief complaint that her front teeth were protruding from her mouth (Fig. 1A). Her upper dental midline was coincident with the facial midline. She had a convex profile with an acute nasolabial angle, lip incompetence, and mentalis muscle strain. Both the upper and lower lips were protrusive in relation to the E-line. Intraoral examination found that the upper and lower arches were both tapered, and the upper second molars were in buccal crossbite with the lower second molars. The overjet and overbite were 10mm and 4mm (50%), respectively. There was a .5mm discrepancy between centric occlusion and centric relation. 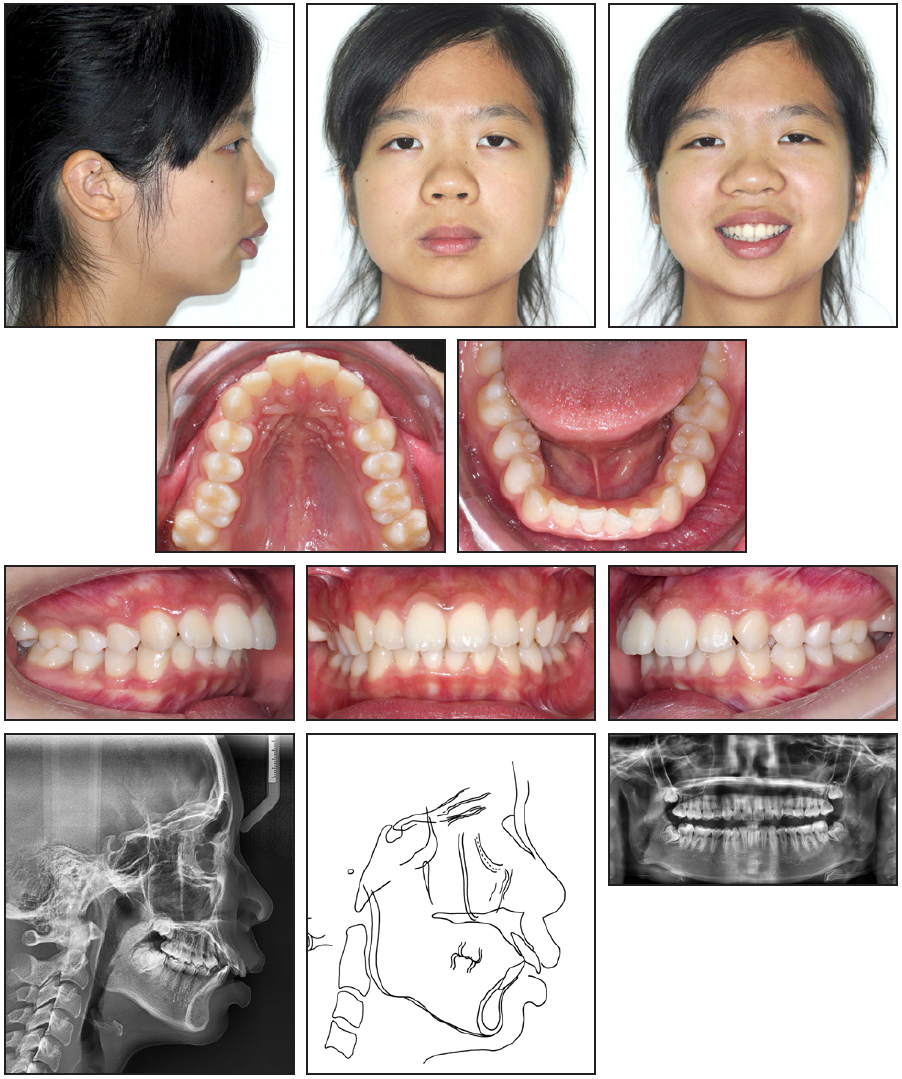 Dental casts showed that the molars and canines were in a full-step Class II relationship. In the Bolton tooth-size analysis, the anterior ratio was 78.7%, signifying a slight lower anterior tooth excess. Panoramic radiography revealed the presence of all four third molars (Fig. 1B). 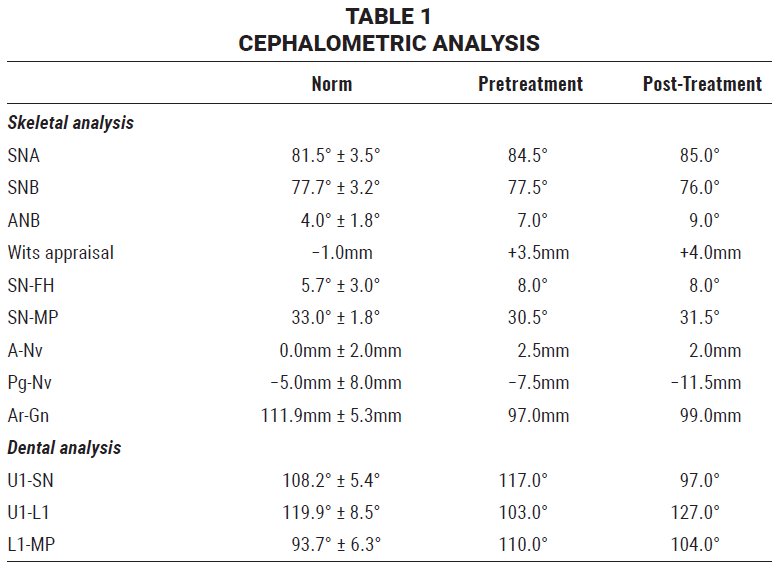 Treatment objectives included normal overjet and overbite, a Class I canine relationship, and improved facial esthetics from the elimination of lip incompetence, which would reduce the mentalis muscle strain. Given the severe skeletal Class II malocclusion, the ideal treatment plan would have been a surgical-orthodontic approach involving extraction of the upper second premolars and lower first premolars for dental decompensation, followed by one-jaw surgery. Although this option would have provided superior esthetic results, the patient rejected it.

The alternative was camouflage treatment. Because of the full-step Class II canine and molar relationships, extraction of the upper first premolars was proposed. The use of bilateral upper TADs was considered essential to allow maximum anterior retraction for overjet correction. A transpalatal arch (TPA) with bilateral extension arms was needed to correct the buccal crossbite of the upper second molars. The prognosis for stability was good if adequate buccal interdigitation was achieved, provided that the patient complied with retainer wear.

After extraction of the upper first premolars, both arches were bonded with .022" brackets. The posterior crossbite was corrected in three months by means of power chain attached to the extension arms of the TPA (Fig. 2).

Two 2mm × 10mm stainless steel TADs were then inserted buccally between the upper first and second molars. En-masse retraction was performed using .016" Australian* intrusion wire for better incisor torque control, and Class II elastics were worn from the upper canines to the lower molars to aid in canine retraction (Fig. 3). Power chain was applied from long hooks between the canines and lateral incisors to the TADs for more bodily incisor retraction. 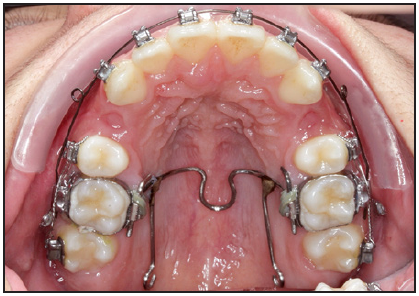 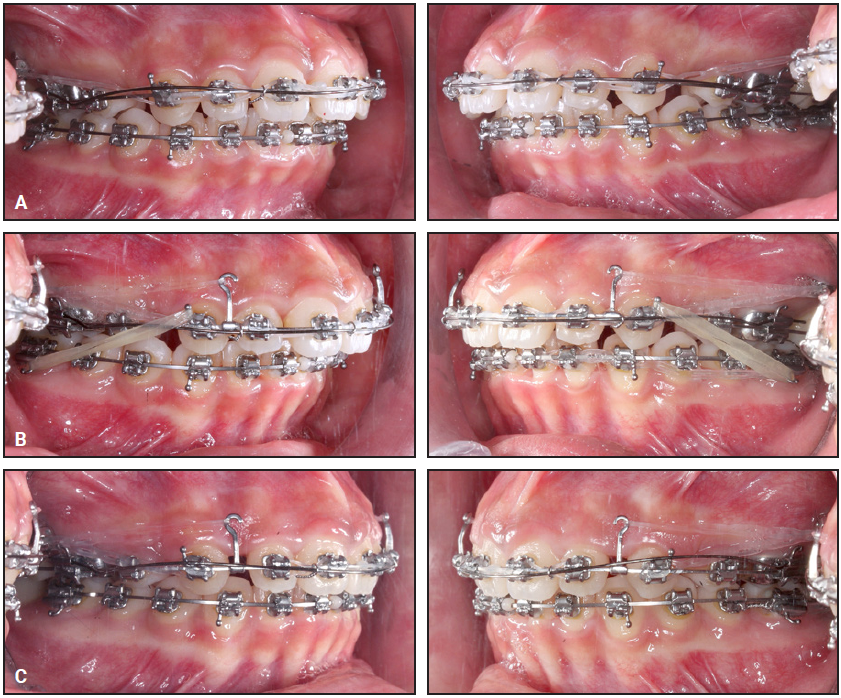 After three years of upper anterior retraction, a bulge was noted over the palatal aspect of the upper right central incisor (Fig. 4).

There were no accompanying symptoms: no pain on percussion over the upper central incisors or right lateral incisor, and no fluctuation, palpation pain, or fistula over the upper anterior palatal region. The electrical pulp test of the upper anterior teeth was normal. An intraoral periapical radiograph showed no bony destruction or periapical lesions, but a small mass was observed around the middle third of the upper right central-incisor root. Cone-beam computed tomography (CBCT) was performed for better assessment of the mass, which was located behind the upper right central incisor, close to the palatal surface, and measured about .5cm × .3cm × .3cm. The mass was likely calcified with an irregular border. External root resorption was also found, with a smooth indented surface noted at the palatal surface of the root, nearly involving the pulp. These findings had been absent in the pretreatment CBCT, which was taken to determine the ideal TAD placement site.

A team including a periodontist and an endodontist planned flap surgery to remove the unknown mass. A full-thickness flap was raised on the palatal side between the upper canines (Fig. 5A). The tissue mass with several calcified protuberances was found loosely attached to the palatal mucosa of the upper right central incisor (Fig. 5B). The palatal root surface of the upper right central incisor was depressed, but no irregularities were found on the surface of the depression. There was no major difference in color between the upper central-incisor roots (Fig. 5C). The tissue mass was collected and prepared for biopsy, and the area was sutured (Fig. 5D). Wound healing was favorable after one week.

Pathological analysis revealed that the specimen consisted of one tissue fragment, brown in color and soft to hard in texture, measuring 1cm × .3cm × .3cm (Fig. 6). Microscopic examination showed a cystic structure lined by double to multiple layers of cuboidal cells. The wall of the cystic structure was composed of mixed loose and dense fibrous connective tissue with scattered remnants of odontogenic epithelium. Some dentinoid calcification was seen adjacent to the cystic lining. Calcified materials, with or without dentinal tubules, and ghost cells (enlarged eosinophilic epithelial cells with eosinophilic cytoplasms, but without nuclei) were admixed within the ameloblastic epithelium, and dental papillary tissue was also identified. The mass was considered to be a calcifying odontogenic cyst with an odontoma.

After one year of residual space closure and occlusal detailing for better interdigitation, all fixed appliances were removed. Upper and lower Essix** (daytime) and wraparound (night) retainers were delivered for retention.

In a total four years of treatment, the overjet was reduced from 10mm to 2mm (Fig. 7A). 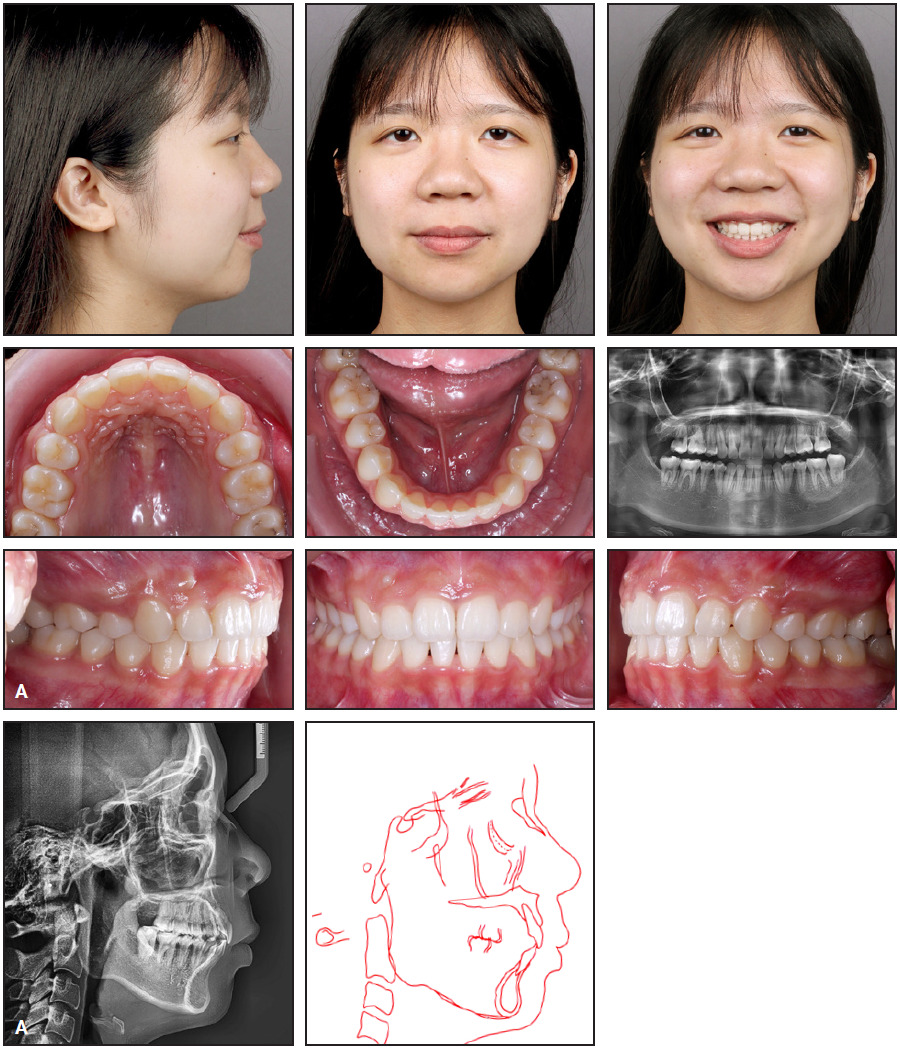 Fig. 7 A. Patient after four years of treatment (continued in next image).

The arches were coordinated, with favorable interdigitation and a mutually protected occlusion. While the canines reached a Class I relationship, the molars retained a full-step Class II relationship. The initially convex profile was improved by retraction of the upper anterior teeth, and lip competence was achieved, resulting in less pronounced mentalis muscle activity. Radiographic examination showed acceptable root parallelism but mild root blunting (Fig. 7B). 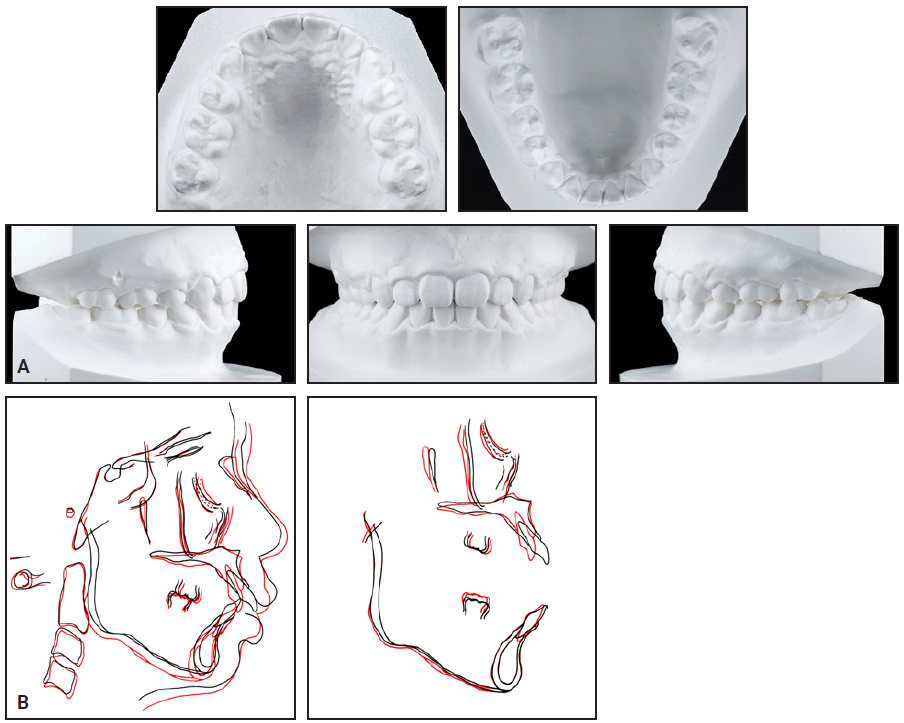 Fig. 7 (cont.) A. Patient after four years of treatment. B. Superimposition of pretreatment (black) and post-treatment (red) cephalometric tracings.

Cephalometric analysis indicated that nasion grew 2mm anteriorly from age 15 to 19, while Ar-Gn exhibited 2mm of late mandibular growth (Table 1). SN-MP increased by 1°, confirming a slight clockwise mandibular rotation. Regional superimpositions1 showed that the upper incisors were retracted by 8mm, and the lower incisors by 1.5mm, due to interproximal reduction in the final detailing stage, with good vertical control.

A calcifying odontogenic cyst—a rare lesion accounting for less than 1% of all odontogenic cysts—is a developmental type of epithelium-lined pathological cavity.2 Also called a Gorlin cyst, the calcifying odontogenic cyst was first identified in 19623 and then defined by the World Health Organization (WHO) in 1971 as “a non-neoplastic, cystic lesion in which epithelial lining shows a well-defined basal layer of columnar cells, an overlying layer that is often many cells thick and that may resemble stellate reticulum, and masses of ‘ghost’ epithelial cells that may be in the epithelial cyst lining or in the fibrous capsule. The ‘ghost’ epithelial cells may become calcified. Dysplastic dentin may be laid down next to the basal cell layer of the epithelium. It may be associated with a complex odontoma or with tissue resembling an ameloblastic fibro-odontoma.”4 The WHO classified the calcifying odontogenic cyst as a benign tumor in 2005, but redefined it as a developmental cyst in 2017.2

This type of cyst, believed to be formed from odontogenic epithelial remnants, can be divided into intraosseous and extraosseous lesions, with the former representing about 80% of all cases.2,5 No sex prevalence has been noted, and there is a wide age range with a peak incidence in the third decade of life.2,5 Equal predilection has been reported for the upper and lower jaws, but 65% of instances affect the anterior regions.6,7 Clinically, the patient presents with a painless, well-defined swelling that has developed over a few months and is often discovered incidentally.6 Radiographically, the cyst is generally a mixed lesion with a well-defined unilocular (sometimes multilocular) radiolucent area containing different amounts of radiopaque material.8

Three histological types of intraosseous calcifying odontogenic cysts have been identified: cystic (72%), cystic odontoma-associated (26%), and neoplastic (2%).7 The cystic variety exhibits moderate mural proliferations of epithelium and negligible or sparse amounts of dentinoid, which can occur over a wide age range with a peak in the second decade of life (35%).7,9 The cystic odontoma-associated type (with a complex or compound odontoma) shares the characteristics of all dental hard tissues, being situated in close proximity to the luminal part of the epithelium-lined cyst. This type also occurs most often in the second decade of life (60%).7,9 The neoplastic calcifying
odontogenic cyst, also known as a dentinogenic ghost-cell tumor, has a wide age distribution and an entirely different structure, resembling an ameloblastoma, with the cyst observed only as a secondary feature.7,9

An odontoma can occur in combination with a calcifying odontogenic cyst because the cyst develops from odontogenic epithelium, with the potential to undergo differentiation, degeneration,10 or morphologic transformation. Granulation tissue subsequently leads to the formation of a dentinoid substance.3 Hirshberg proposed the term “odontocalcifying odontogenic cyst”11 and recorded the differences in sex, age range, and location between simple cystic and odontocalcifying odontogenic cysts. The latter has a female-to-male prevalence ratio of 1.9:1, and 60% of the cases occur in the second decade of life. The most common site is the upper jaw (61.5%), with 75% of those instances in the anterior region. Our patient exhibited the most common characteristics: a female who started orthodontic treatment at age 15 and whose lesion was found behind the upper right central incisor.

The radiographic appearance of about 80.5% of odontocalcifying odontogenic cysts is that of a well-defined and mixed radiolucent-radiopaque lesion. Histologically, the lesion is composed of a single large cyst (similar to a simple cystic calcifying odontogenic cyst), with a varying amount of radiopaque flecks that appear to be well-defined tooth-like structures, giving the impression of a single lesion.11 Radiographically, our patient’s lesion seemed to be primarily composed of a calcified tooth-like structure. Fortunately, a pretreatment CBCT can be consulted to rule out the existence of a calcified mass (Fig. 4C). Other pathological findings—such as periodontal or periapical bony destruction, abscess formation, a pocket deeper than 6mm, or excessive attrition suggesting torn cementum—could also be ruled out in our patient.12

In our case, CBCT revealed external root resorption with a smooth, indented surface in the middle third of the upper right central incisor’s mesiopalatal surface. No irregularity was found during surgical removal. The patient had no symptoms or signs during the whole orthodontic treatment period. At the one-year follow-up after bracket removal, normal healing and a lack of recurrence of the cyst were confirmed. Regular monitoring of the upper right central incisor will be essential on a long-term basis.

ACKNOWLEDGMENT: I would like to express my sincere gratitude to Associate Professor Chung-Chen Jane Yao, Department of Orthodontics, School of Dentistry, College of Medicine, National Taiwan University, for her teaching and support; Dr. Yang-Che Wu for his suggestions and knowledge; and Drs. Wan-Chun Wen and Pei-Hsuan Lin for their assistance in removal of the cyst. Fig. 7A A. Patient after four years of treatment (continued in next image).

Fig. 7B (cont.) A. Patient after four years of treatment. B. Superimposition of pretreatment (black) and post-treatment (red) cephalometric tracings. 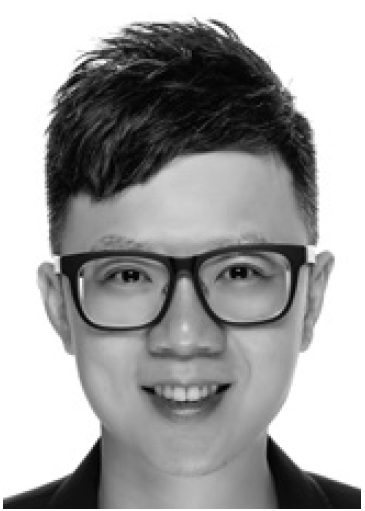