"A treatment plan in orthodontics, as in any other field, may be less than optimal if it does not take full advantage of the possibilities or if it is too ambitious. There is always a temptation to jump to conclusions and proceed with a superficially obvious plan without considering all the pertinent factors.” —William Proffit1

The following case report details the diagnosis, treatment planning, and treatment of a patient with multiple challenging diagnoses that required careful consideration of all possible options.

A 15-year-old female presented with the chief complaint of wanting “nice teeth.” The facial profile was generally symmetrical, with competent lips at rest (Fig. 1). On full smiling, the maxillary midline deviated about 2mm to the right of the facial midline, the smile arc was flat, and the maxillary incisal display was about 80%, with no gingival display. The patient exhibited an orthognathic soft-tissue profile, mild retrusion of the upper lip with possible lip strain, and a shallow mentolabial fold. 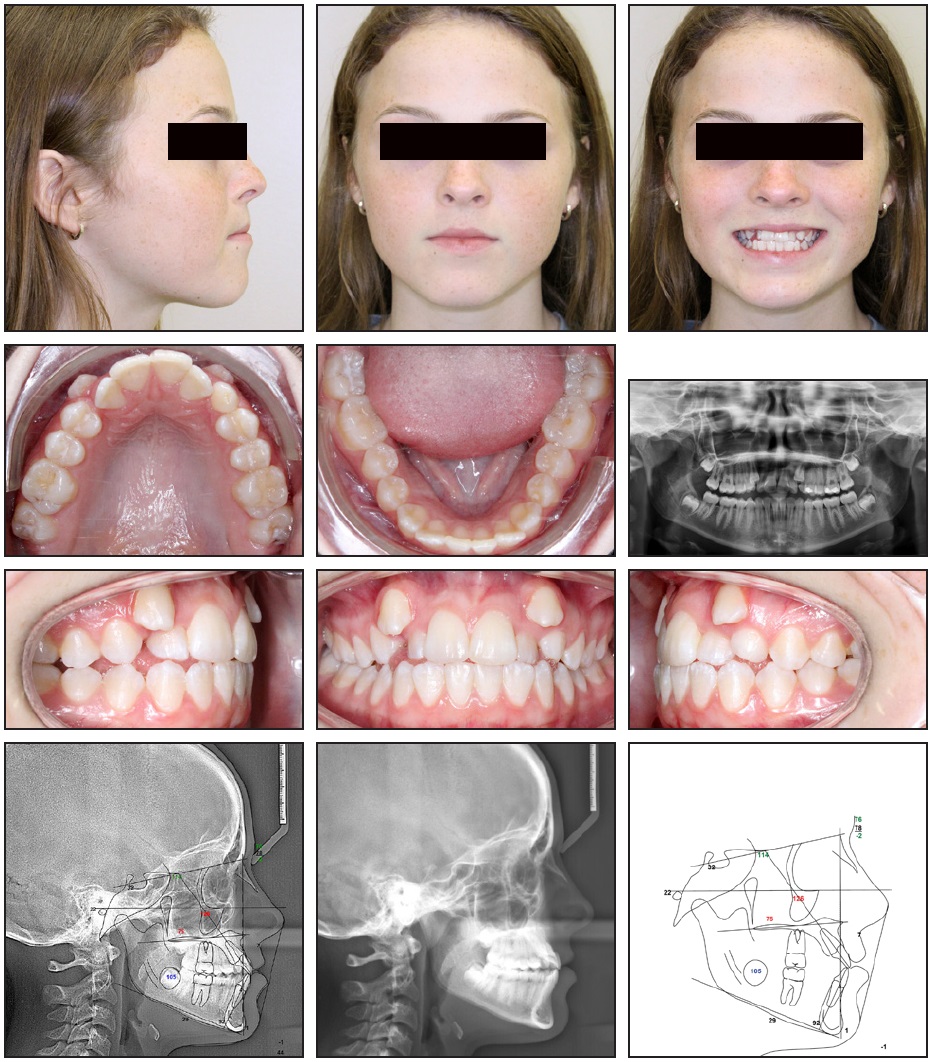 Intraoral examination found a Class II subdivision right molar malocclusion, a Class II canine relationship, moderate maxillary crowding with ectopically erupted upper canines labially blocked from the arch, mild mandibular crowding, a tapered maxillary archform with minimal to no buccal overjet on the right side, a retained upper left deciduous canine, a lingual crossbite of the upper lateral incisors, a mild lower midline deviation to the left, 0-1mm of overjet, and a shallow overbite of 0-1mm tending toward an open-bite tendency (Fig 1B).

The panoramic radiograph confirmed that the patient was in the permanent dentition with no missing teeth and properly developing third molars. No pathologies were noted, and the condyles and ramus heights were within normal limits. Cephalometric evaluation indicated a Class III skeletal pattern caused by a mildly deficient maxilla with proclined upper incisors (Table 1).

Because of the extent of this patient’s maxillary crowding, we considered extraction treatment. Maxillary extractions alone could have exacerbated the Class III skeletal pattern, however, making it difficult to maintain positive overjet and potentially creating a negative impact on the soft-tissue profile (particularly the upper lip). Adding mandibular extractions might have helped with the anteroposterior correction, but would have been unnecessary in an arch with otherwise minimal space requirements. Additionally, the lower incisor roots were close to the internal symphysis, restricting the amount of incisor retraction that could be performed within the alveolar boundaries; therefore, any lower extraction spaces would have needed to be closed primarily through mesial movement of the posterior segments.

The treatment plan for this patient involved .022" Forestadent* 20/12 molar prescription appliances (except for a 20/20 prescription to provide increased mesial-out rotation of the upper right first molar), infrazygomatic temporary anchorage devices (TADs) to control anchorage during distalization of the right buccal segment, and selective interproximal reduction (IPR) and elastic wear as needed.

The maxillary arch was initially bonded from first molar to first molar, bypassing the canines. The incisor brackets were inverted to achieve negative crown torque of −19° and −10° on the central and lateral incisors, respectively, thus avoiding proclination of the incisors. After eight weeks of initial maxillary alignment on twin .014" nickel titanium archwires, an .018" × .022" stainless steel archwire was inserted, and two infrazygomatic TADs were placed (Fig. 2). Open-coil springs were attached between the upper lateral incisors and first premolars, and the lateral incisors were ligated to the TADs to prevent incisor proclination from the springs and to maximize distal movement of the posterior segments.

Four weeks later, the lower arch was bonded, twin .014" nickel titanium wires were inserted, and bite turbos were placed on the upper second premolars to control the posterior vertical dimension and avoid disocclusion from the lower brackets (Fig. 3). A power chain was attached from the upper right TAD to the upper right first premolar for buccal segment distalization and from the upper left TAD to the upper left canine (still not engaged with the archwire) for single-tooth distalization. The open-coil springs from the upper lateral incisors to the first premolars were reactivated as needed to open space for the upper canines; closed-coil springs were placed when enough space had been gained.

After about eight months of treatment, once there were stainless steel wires in both arches, the upper canine spaces were adequate, and the canines were positioned directly apical to the spaces, the patient was referred for extraction of the retained upper left deciduous canine. Triangle elastics (5⁄16", 6oz) were then worn from the upper canines to the lower canines and first premolars to extrude the upper canines (Fig. 4). The maxillary archwire was custom-fabricated with an occlusal step and loop to help extrude the canine, maintain space, and allow for engagement of the canines with elastic thread. Bilateral lacebacks were added from the upper first premolars to first molars to maintain the Class I buccal relationships.

After 14 months of treatment, a continuous .018" × .018" nickel titanium archwire was placed in the maxillary arch, while the stainless steel wire remained in the mandibular arch (Fig. 5). Because of the patient’s open-bite tendency, lingual tongue spurs were bonded to the lower incisors, and myofunctional tongue exercises were prescribed. Anterior vertical elastics (5⁄16", 2oz) were added from the upper lateral to the lower central incisors, in conjunction with the Class I triangle elastics.

The archwire progression continued up to .019" × .025" upper and .018" × .022" lower stainless steel finishing wires. After 20 months of treatment, a .2mm IPR was performed at each contact point from the upper right canine to left first molar and from the lower first molar to first molar to correct a minor Class II canine relationship on the left side and a mild upper-incisor proclination (Fig. 6). A power chain was attached beneath the archwire from the upper left canine to first molar to utilize the IPR space for distal canine movement. To further address the incisor proclination and maintain a positive overbite, a torquing chain was placed incisally over the six anterior teeth.

Full alignment of the dentition was achieved, with Class I molar and canine relationships (Fig. 8A). No overexpansion of the dental arches occurred, as evidenced by a final total upper molar width increase of 1.6mm (less than 1mm per side) and a final lower molar width that remained within 1mm of the initial width (Table 1). No excessive proclination or protrusion of the anterior dentition was ideal inclination by means of root movement, with seen. The upper incisors were retroclined into an no anterior movement of the incisal edges. The lower incisors were proclined slightly (3°), while an excellent Holdaway ratio of 1.4 (norm = 1) was maintained. The anterior crossbite was fully corrected, with nearly ideal overbite and overjet measurements, and the patient’s open-bite tendency was managed. 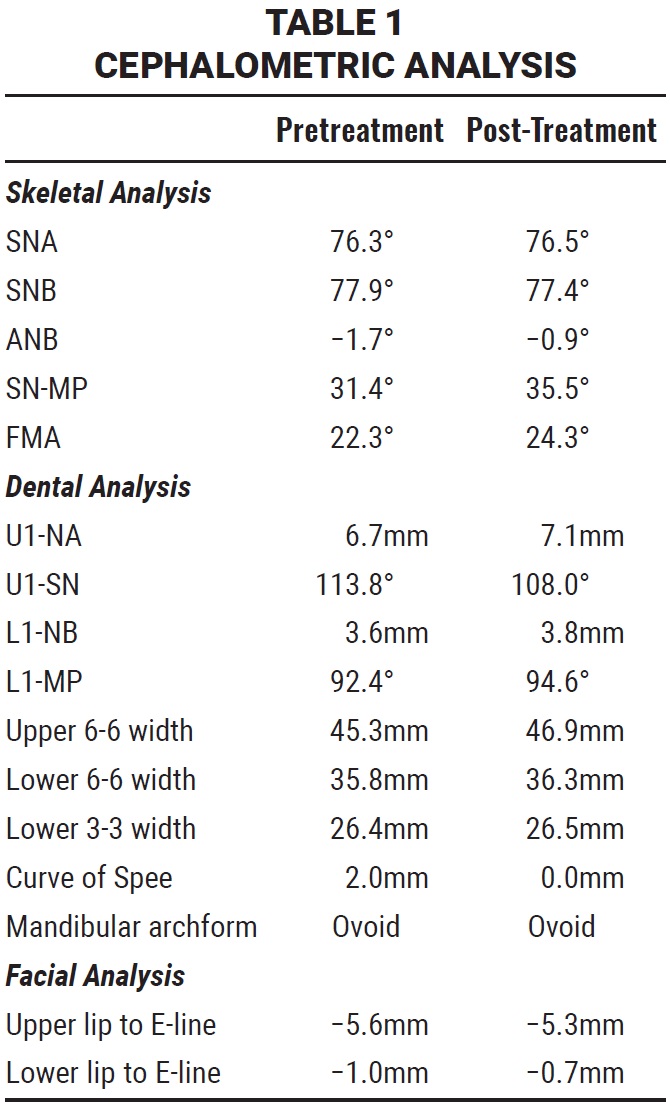 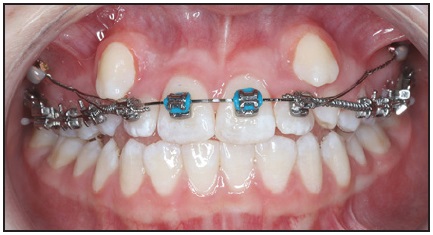 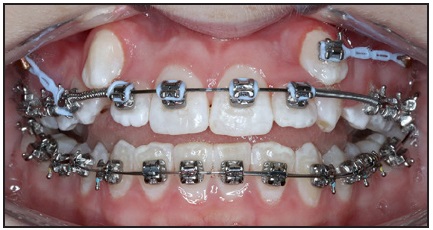 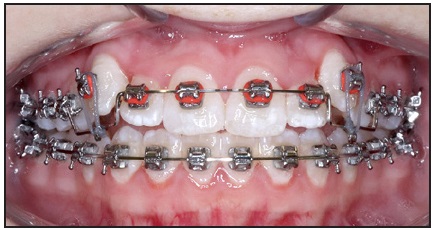 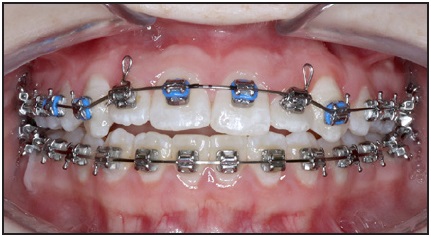 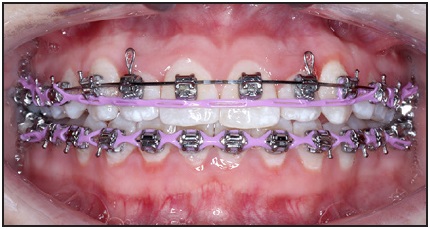 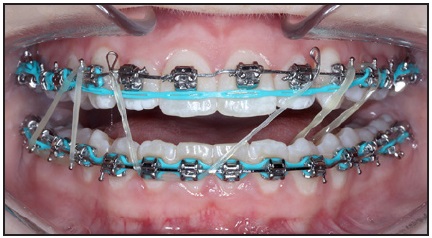 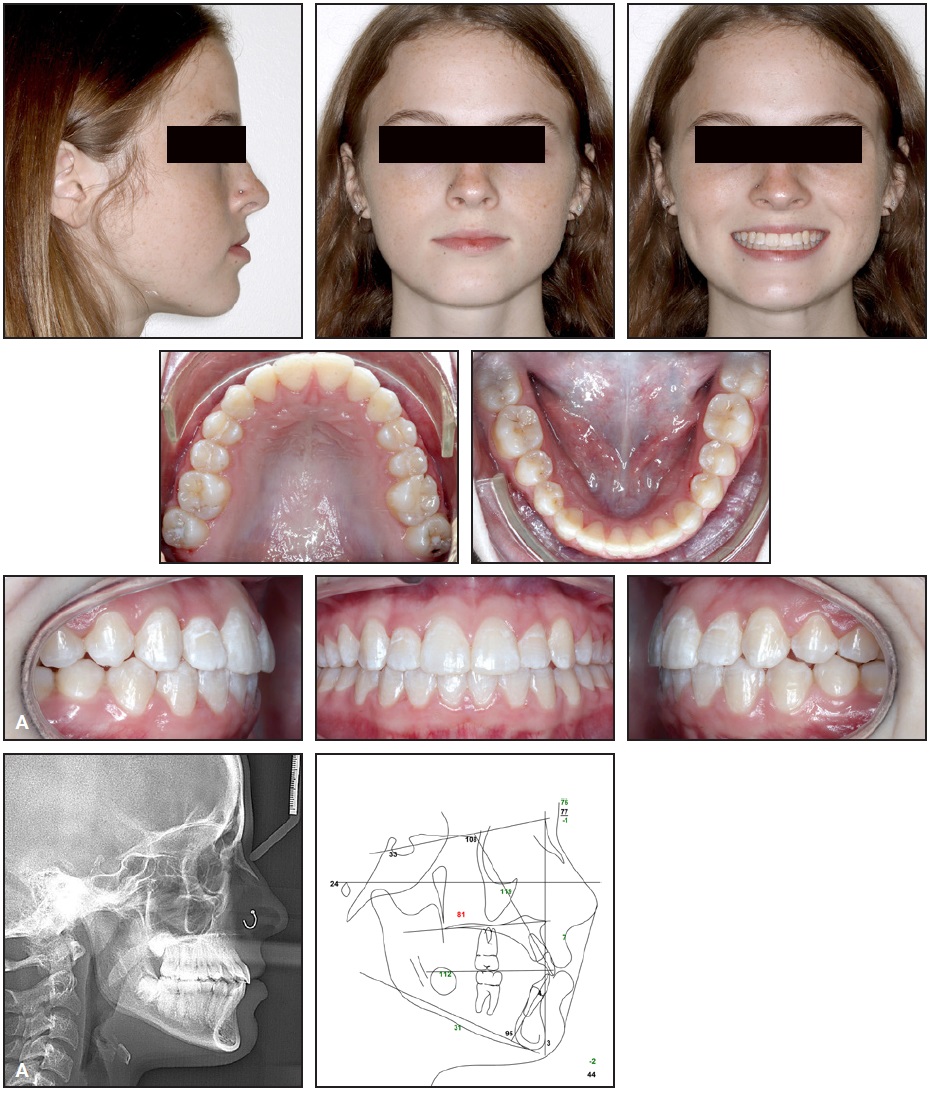 Fig. 8 A. Patient after 25 months of treatment (continued in next image).

The orthognathic profile was preserved, with no lip protrusion or lip strain. Improvements were noted in the upper-lip position at rest, including a more relaxed and esthetic upper-lip curvature or “lip curl.” Overall smile esthetics were enhanced by achieving a consonant smile arc with increased maxillary incisal display (Fig. 8B). 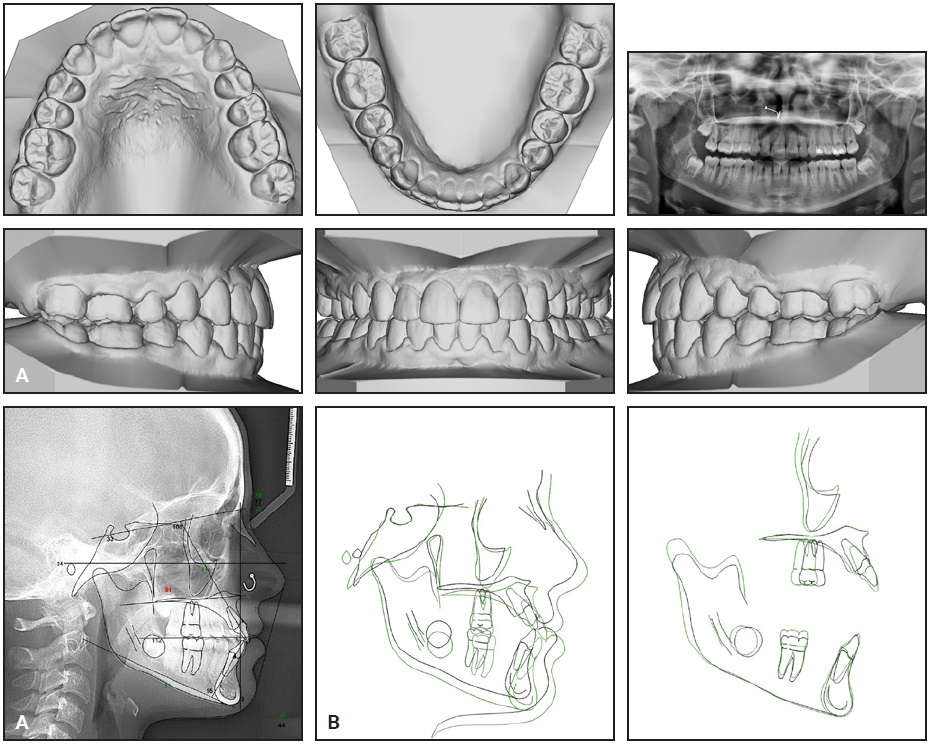 Fig. 8 (cont.) A. Patient after 25 months of treatment. B. Superimposition of pre- and post treatment cephalometric tracings.

This treatment proved successful in achieving the initial goals in a reasonable period of 25 months, including a three-month clinic closure due to the COVID-19 pandemic.

Without maxillary extractions, it was important to control space creation while minimizing incisor proclination and soft-tissue strain. To this end, we:

Because this patient presented with a shallow overbite, the vertical dimension also required special consideration. To minimize the risk of creating an open bite, we:

Thorough analysis of the final records identified areas for potential future improvements. The increased mesial-out prescription used for Class II correction of the upper right first molar resulted in a slight overrotation of this tooth. When using a customized prescription, it is important to monitor rotation closely during the alignment stage and either rebond a standard bracket when the rotation is corrected or add archwire bends during the finishing stage.

While the patient’s final occlusion was functional and stable, there were slight marginal ridge discrepancies at the maxillary molars. To avoid this situation, the molar marginal ridges should be carefully evaluated intraorally at the panoramic/repositioning appointment, as this area can be difficult to view on a panoramic radiograph.

Finally, while the patient’s maxillary posterior dentition contacted well at the functional palatal cusps, the buccal cusps would have benefited from occlusal settling. This situation was addressed after debonding by prescribing Hawley retainers with no occlusal coverage for long-term retention. Future improvements during treatment might avoid the need for settling after debonding. Placing a lighter maxillary wire, such as braided stainless steel, and instructing the patient to wear a posterior vertical elastic pattern for a short period prior to debonding would probably improve the occlusal contact of the maxillary posterior buccal cusps. This settling, or lingual crown tip, of the maxillary posterior buccal cusps would also assist in optimizing the buccolingual inclination of those teeth.

Fig. 8A A. Patient after 25 months of treatment (continued in next image).

Fig. 8B (cont.) A. Patient after 25 months of treatment. B. Superimposition of pre- and post-treatment cephalometric tracings. 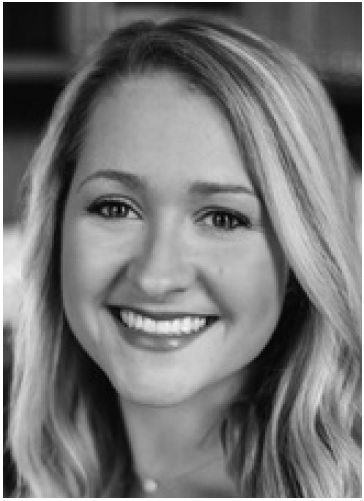 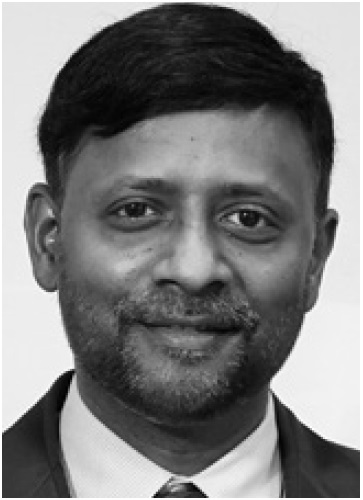