Nonextraction Treatment of Severe Crowding with a Self-Ligating Appliance

The main advantages of self-ligating brackets are the low friction between bracket and archwire, potentially reduced treatment time, shorter appointments, longer intervals between appointments, greater patient comfort, and less plaque accumulation.1-7 Another central benefit is the possibility of avoiding extractions, thanks to the arch expansion that can be obtained with self-ligating appliances and high-technology archwires.1

The Damon* System, which uses passive self-ligating brackets in conjunction with complementary Damon Copper NiTi** archwires, is capable of increasing arch width while keeping the teeth perfectly centered in the alveolar bone.8 This transverse development of the maxilla and mandible reduces the need for extractions and for procedures such as rapid maxillary expansion or surgically assisted expansion.8

The present report describes an adult patient with severe mandibular anterior crowding in whom the self-ligating Damon appliance was used to provide space for leveling and alignment while avoiding extractions that would have worsened a balanced profile.

A 25-year-old male presented with the chief complaint of crowding in the mandibular anterior segment, including a complete lack of space for two mandibular incisors (Fig. 1A). He exhibited a balanced facial profile, Class I molar and canine relationships, somewhat narrow maxillary and mandibular arches, crowded upper incisors, and severely crowded lower incisors (Fig. 1B). 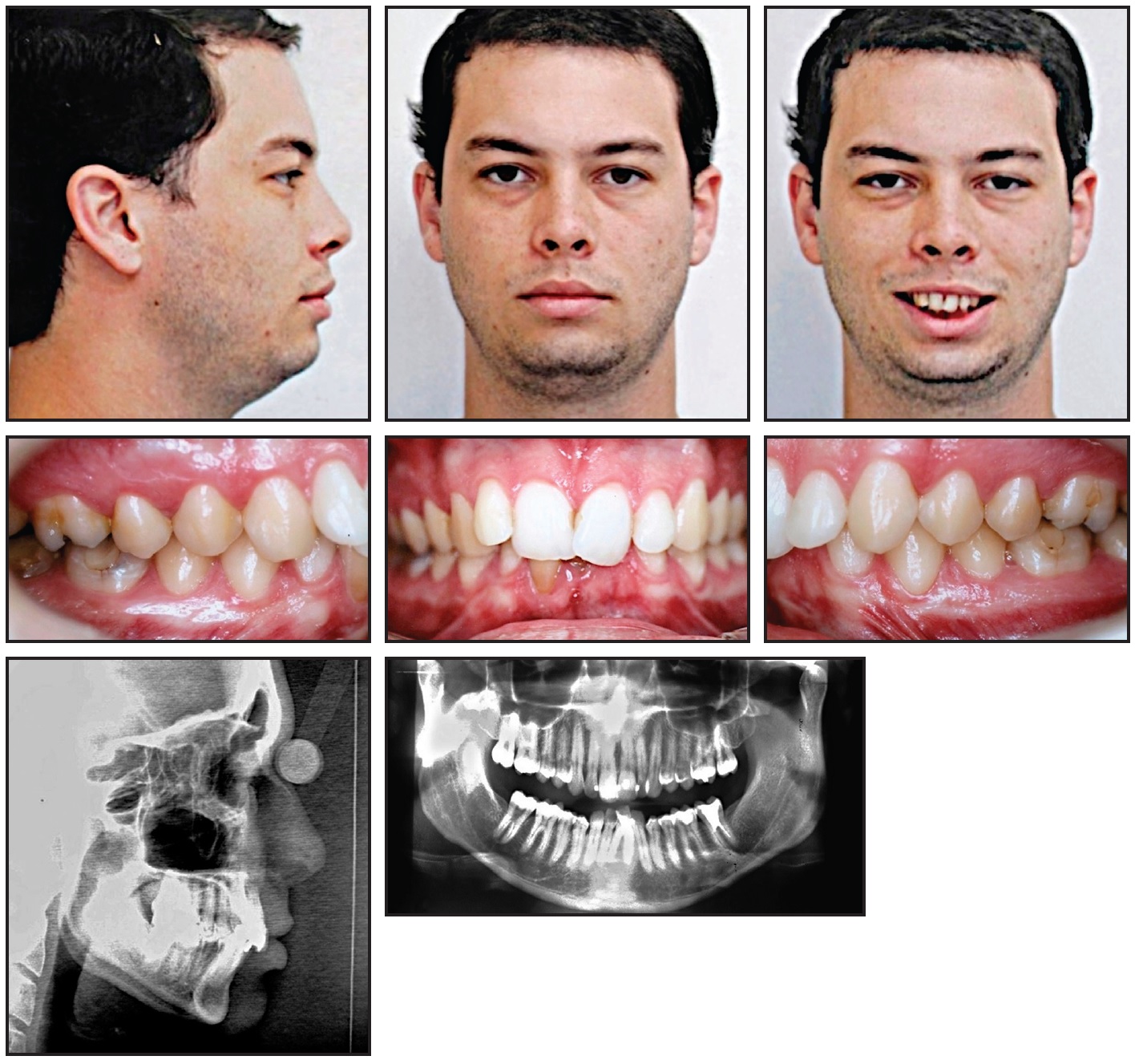 Cephalometric analysis indicated a Class II skeletal relationship with a slightly protrusive maxilla and a slightly retrusive mandible (Table 1). The overjet and overbite were extreme because of the lower crowding. The maxillary incisors were vertically inclined and slightly retrusive, while the mandibular incisors were labially inclined and protrusive. The nasolabial angle was within the normal range. A panoramic radiograph confirmed the absence of the third molars, which had been extracted previously.

Treatment objectives were to expand the maxillary and mandibular arches and obtain space for leveling and alignment of the upper and lower incisors, correct the overjet and overbite, and maintain the Class I molar and canine relationships.

One treatment option was to extract the four premolars or perhaps two upper premolars and two lower incisors, but this would worsen the patient’s balanced profile. A second option involved the use of a lower Schwarz appliance to orthopedically expand the premolar region, followed by fixed appliances. The third option was to perform minor interproximal stripping and use the Damon System to gain space for leveling and alignment of the upper and lower incisors. In consultation with the orthodontist, the patient chose the third approach.

Before the start of orthodontic treatment, root-canal treatment of both mandibular central incisors was required because of idiopathic pulpal necrosis, which had resulted in darkening of the crowns. 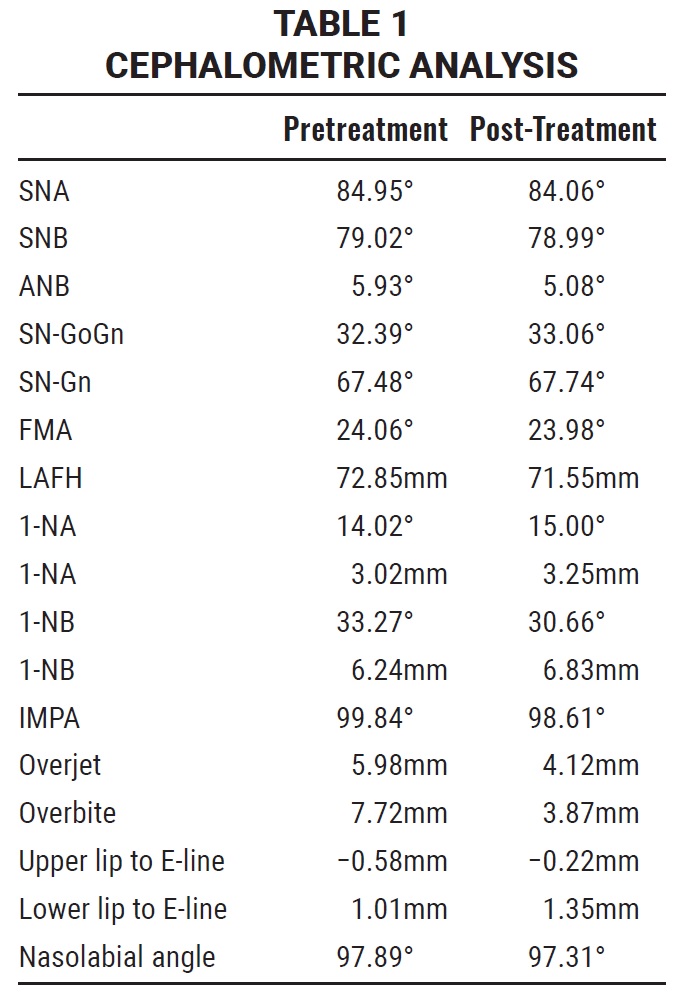 Standard-prescription .022" Damon MX* self-ligating brackets were bonded in both arches, except for the lingually displaced lower right central incisor. One month later, an open-coil spring was inserted mesial to the lower right canine on the initial .014" Copper NiTi archwire to open space for the displaced incisor (Fig. 2).

A segmental U-shaped arch was added and slightly activated distally to control the lower incisors while avoiding any protrusion. The .014" Copper NiTi archwire was maintained for seven months, until the wire was completely passive in the slots, and was then replaced by an .014" × .025" Copper NiTi archwire. Minor interproximal stripping of the lower incisors was performed to facilitate leveling and alignment.

The lingually displaced lower right incisor was bonded after 23 months of treatment, when sufficient space had been opened for its traction and alignment. Torque control was then needed to align the roots of the lateral incisor buccally and the central incisor lingually. Because it is difficult to control torque on a round archwire, an inverted, U-shaped .017" × .017" TMA* segmental wire was inserted into the vertical bracket slots (Fig. 3). The .014" × .025" Copper NiTi archwire was inserted passively to control torque in all teeth until uprighting and alignment were complete.

The .014" × .025" Copper NiTi archwire was inserted passively to control torque in all teeth until uprighting and alignment were complete.

In the Damon System, the patient’s archform is recorded with a wax bite registration at this stage, allowing for complete expression of the perioral musculature and the alveolar bone remodeling that occurs after arch expansion.9 The system then provides further expansion in the canine, premolar, and molar regions. In this case, the diagrammed .017" × .025" TMA archwires were inserted after 28 months of treatment for additional torque control and arch preparation. Finishing .019" × .025" TMA archwires were used for the last month (Fig. 4).

At the end of orthodontic treatment, porcelain crown prostheses were placed to reestablish the form of the lower central incisors. A passive upper retainer for long-term nighttime wear was fabricated from Copyplast*** C using a MiniSTAR S,*** and a lower 3-3 lingual retainer was bonded. 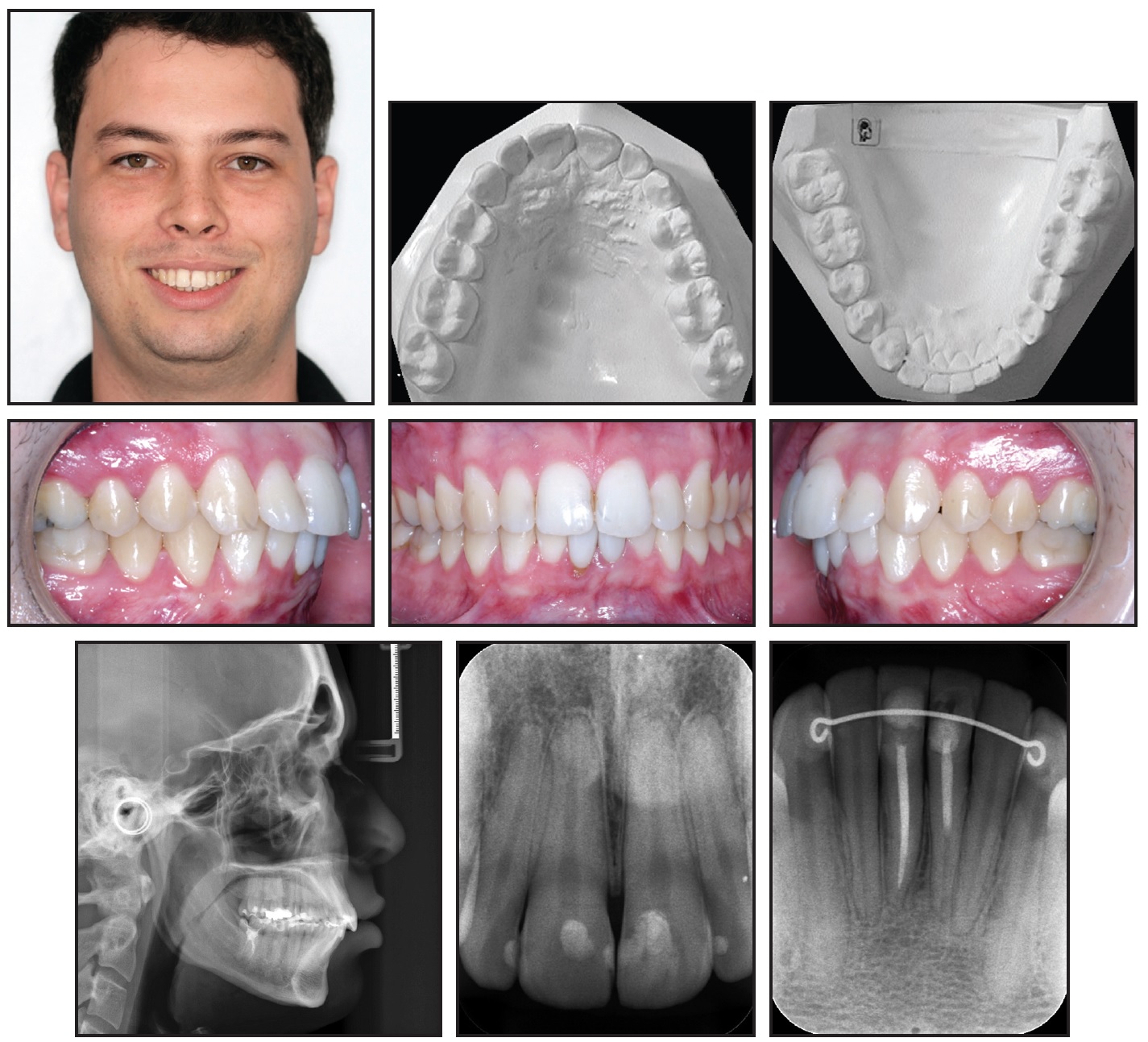 The self-ligating Damon System reduces frictional resistance between the bracket slot and the wire, improving the efficiency of sliding mechanics and reducing the force needed for tooth movement.1-7 With a sequence of archwires providing light and continuous forces, leveling and alignment occurs more easily and with minimal deleterious effects on the roots, bone, or periodontal tissues.1 When thermally activated Copper NiTi wires are used, the leveling occurs by moving teeth to the areas of least resistance, thus enhancing posterior expansion without significantly altering the anteroposterior position of the incisors. In the final stage, in which rectangular TMA or stainless steel wires are used, the torque is transmitted to the bracket, thus expressing the tooth inclination planned by the prescription.

In the case presented here, expansion of the posterior segments in both arches allowed the teeth to be leveled and aligned with only minor interproximal stripping. The main advantage of using self-ligating Damon appliances was that extractions could be avoided and the patient’s balanced profile could be maintained.

This patient was treated using Damon MX brackets with standard torque in both arches. The crowded lower right lateral incisor needed lingual crown torque to upright its root after the first round wire was installed. In this case, the vertical bracket slots were used to accommodate an inverted, U-shaped .017" × .017" TMA wire for torque control, thus reducing treatment time and avoiding problems in the alveolar ridge. Another option would be to bond an inverted low-torque (−11°) bracket on the lower lateral incisor and a high-torque (+11°) bracket on the lower central incisor for torque control with the .014" × .025" Copper NiTi archwire.

Post-treatment dental cast measurements of the WALA ridge were increased by 5mm at the mandibular canines and 2.5mm at the first pre­molars10 (Fig. 6).

Fig. 6 A. WALA ridge10 before treatment. B. After treatment.

This arch expansion was obtained not only by lateral tooth movement, which increased the intercanine, interpremolar, and intermolar widths, but also by alveolar bone remodeling following movement of the teeth.9

Post-treatment computed tomographic (CT) images confirmed that the integrity of the alveolar bone and the dental roots was maintained (Fig. 7). 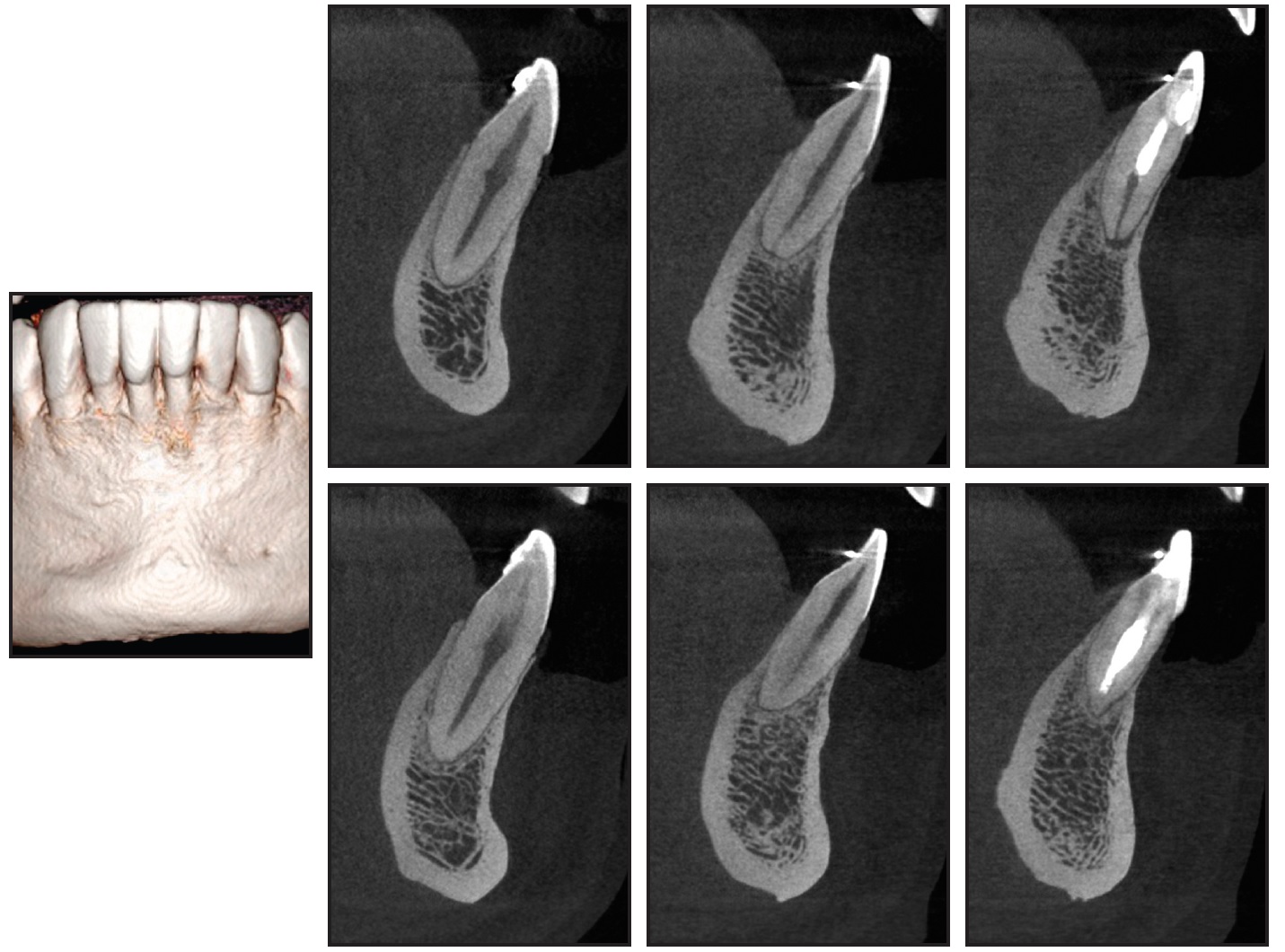 The lower central incisors showed the greatest alveolar bone loss, but the damage was minimal. Unfortunately, a CT scan was not required before orthodontic treatment, and therefore it is not possible to determine whether this bone loss was preexistent or caused by orthodontic tooth movement. In any event, the overall results were excellent, and the cost-benefit return of the orthodontic treatment was unquestionable. 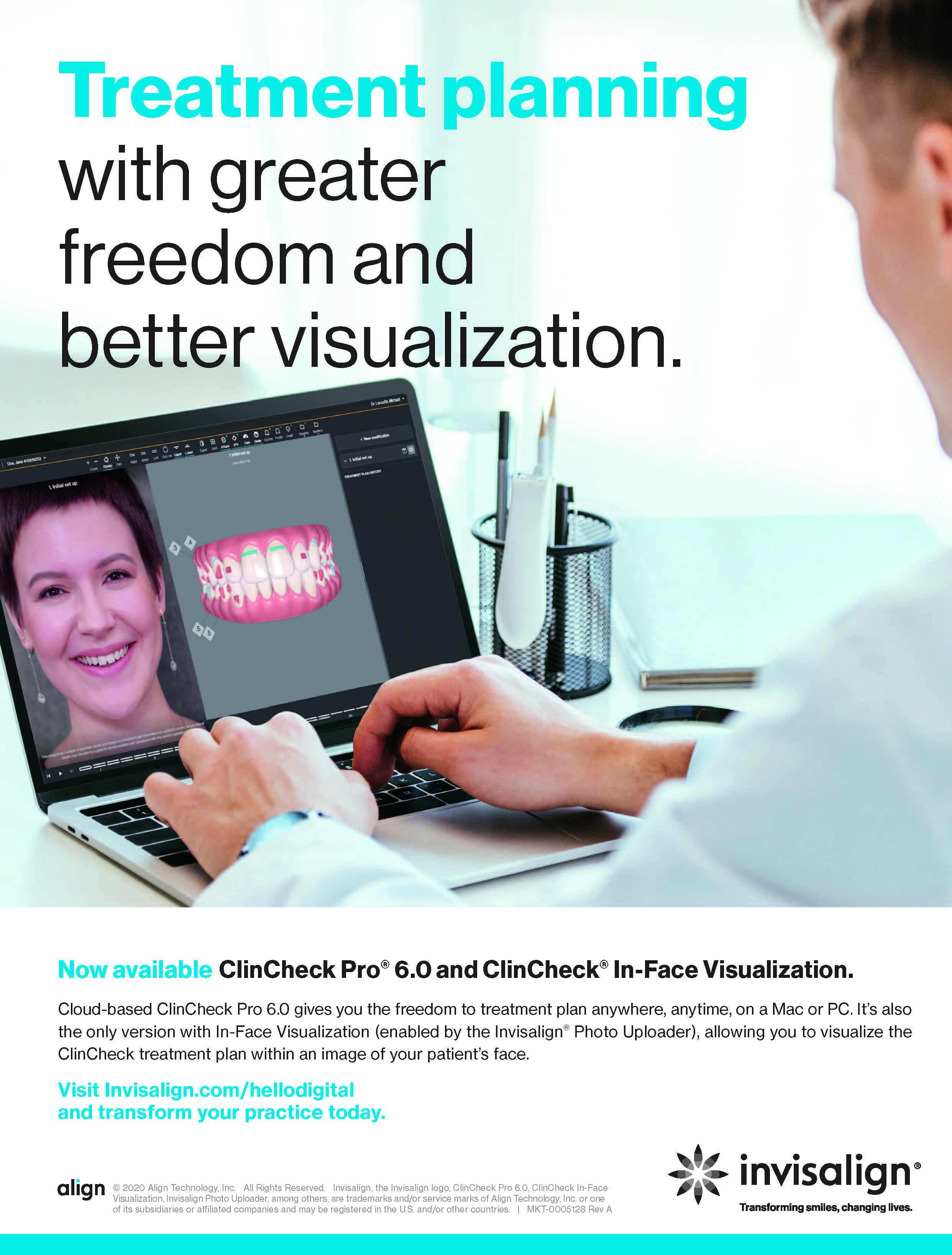 Fig. 1A 25-year-old male patient with lower anterior crowding, Class I molar and canine relationships, skeletal Class II relationship, and severe overbite and overjet before treatment (continued in next image).

Fig. 6 A. WALA ridge10 before treatment. B. After treatment. 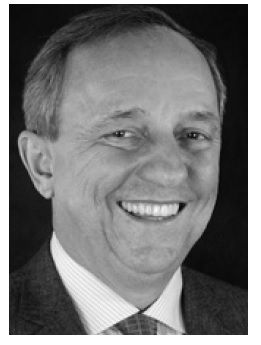 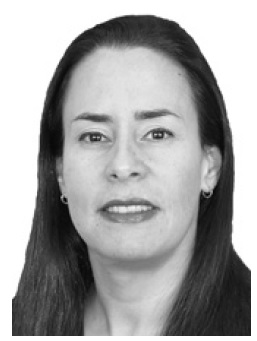 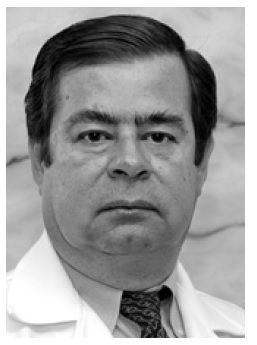