While introducing the cephalometer in 1931, Broadbent proposed a technique for superimposing successive cephalometric films as a way to study the physical changes caused by facial growth over time.1 This approach eventually became a standard component of orthodontic records. Since Broadbent, various authors have developed other methods of superimposing serial cephalograms in the horizontal and vertical dimensions.2,3 An overall superimposition is usually performed on the cranial base to evaluate growth and treatment outcomes by indicating changes in the maxillary and mandibular arches; regional superimpositions of the maxilla or mandible show dentoalveolar changes.

A third dimension has always been lacking in traditional cephalometric analysis and superimposition, even though its importance in orthodontic and surgical planning has been emphasized for decades. Several attempts have been made to visualize this third dimension,3-5 but it was the advent of cone-beam computed tomography (CBCT) and related software that enabled the assessment of all three dimensions in clinical practice.

The resolution of a CBCT image is determined by the individual volume elements (voxels) produced from the volumetric dataset.5 A voxel is the three-dimensional equivalent of the pixel in two-dimensional images. The size of a voxel is defined by its height, width, and depth; the voxels in CBCT scans are usually isotropic.6 The monochromatic gray color of a voxel represents its density value, as expressed in Hounsfield units. This grayscale level can be used to identify areas of higher or lower density within or between images.

With 3D imaging came the ability to perform 3D superimpositions using landmarks, surfaces, or density areas.6 The latter, known as voxel-based superimposition, is currently considered the most accurate and advanced method. Because the fully automated voxel-based registration method matches selected areas between two scans, it avoids some of the problems of methods that depend primarily on accurate landmark identification.

Voxel-based superimposition has been widely used in the medical field for computed tomography and magnetic resonance imaging. Introduced to the dental field by Cevidanes and colleagues,7,8 the process has been applied in growing and non-growing patients for facial soft-tissue assessment and orthognathic surgical prediction.9-12 Its major disadvantage is that it requires several steps to be performed in multiple software programs, consuming about an hour for a well-trained user. Recently, however, several commercial software developers have introduced voxel-based tools for cranial base superimposition that do not require the construction of surface models. These tools are relatively user-friendly, allowing superimpositions to be performed in 30-40 seconds.

This retrospective study examined preexisting CBCT scans of 30 patients from the database of the Case Western Reserve University Department of Orthodontics. There were seven males and eight females in the growing group, with a mean age of 11.8 ± .5 at the initial scan (T1) and 14.2 ± .8 at the second scan (T2), and eight males and seven females in the non-growing group, with a mean age of 24.7 ± 1.6 at T1 and 28.2 ± .8 at T2 (Table 1).

Each scan had been acquired using a Hitachi CB MercuRay*** scanner set at 2mA, 120kVp, large field of view, and 9.6-second scan time. The images were reconstructed with a .377mm slice thickness and exported as Digital Imaging and Communications in Medicine (DICOM) files. Any scans of craniofacial anomalies and syndromes, missing targeted fields of view, or distorted images were excluded. Pre- and post-treatment scans were superimposed on the anterior cranial base using each of the two software systems. 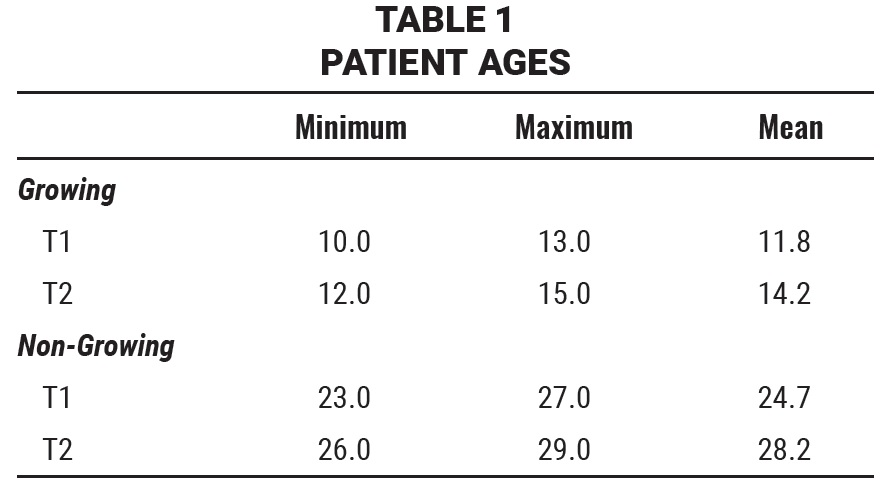 In Dolphin 3D’s voxel-based superimposition program, the two CBCT images are first approximated using at least three landmarks for each volume, and a position-refining tool is used to manually refine the registration (Fig. 1). The anatomical structures of the anterior cranial base are then selected on different slices of the chosen volumes using a size-adjustable box. The automated registration tool aligns the two CBCT volumes by matching the unchanged voxels within the superimposition box. 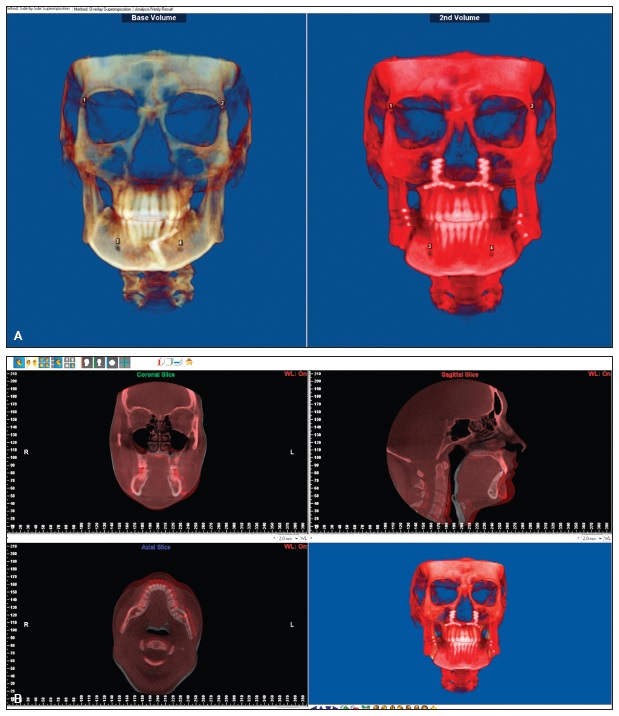 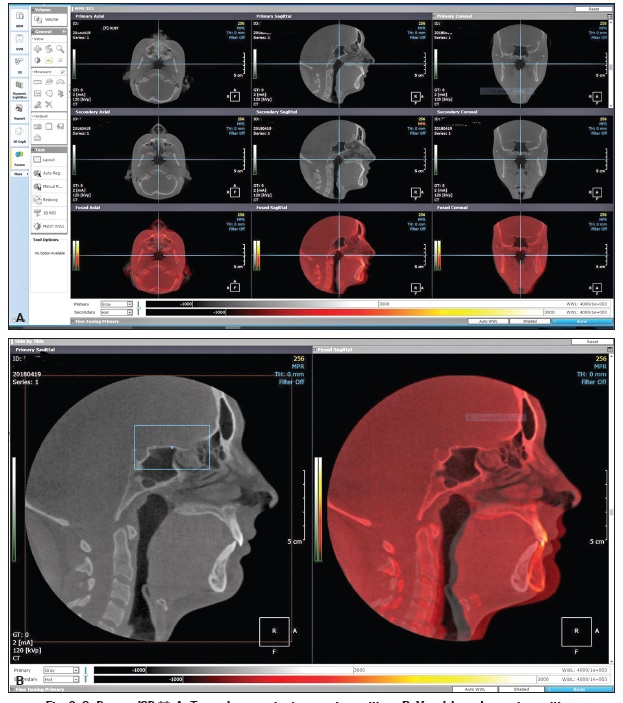 Each program creates a new image called Registered T2 (RegT2), which is registered to the original T1 position in a shared-coordinate system. For our study, these RegT2 images were exported as DICOM files. Using ITK-SNAP† version 3.4.0 and 3D Slicer‡ version 4.4.0 (Intensity Segmenter and Model Maker modules), a surface model of RegT2 was created for each patient from each program.

The key to comparing the Dolphin 3D superimposition to the OnDemand3D superimposition is that the T1 scan in each method must have an unaltered acquisition position in the same coordinate system. If the two superimpositions are equally accurate, their RegT2 images will fit perfectly over each other. In this study, the differences were quantified by measuring the distances between the two surface models with closest-point color maps.

The superimposition protocol was repeated two weeks later for 10 of the patients; the resulting intraclass correlation coefficient of .90 (single measures, .86) demonstrated the reliability of the method.

No clinically significant differences were found between the voxel-based superimpositions constructed using Dolphin 3D and OnDemand3D in either growing or non-growing patients. Examination of the semi-transparent axial, sagittal, and coronal cross-sectional slices of all corresponding anatomical structures confirmed adequate registration of the cranial base structures. Color-mapped surface distances showed that the absolute mean difference in superimposition was less than .5mm for both growing and non-growing patients (Fig. 3). 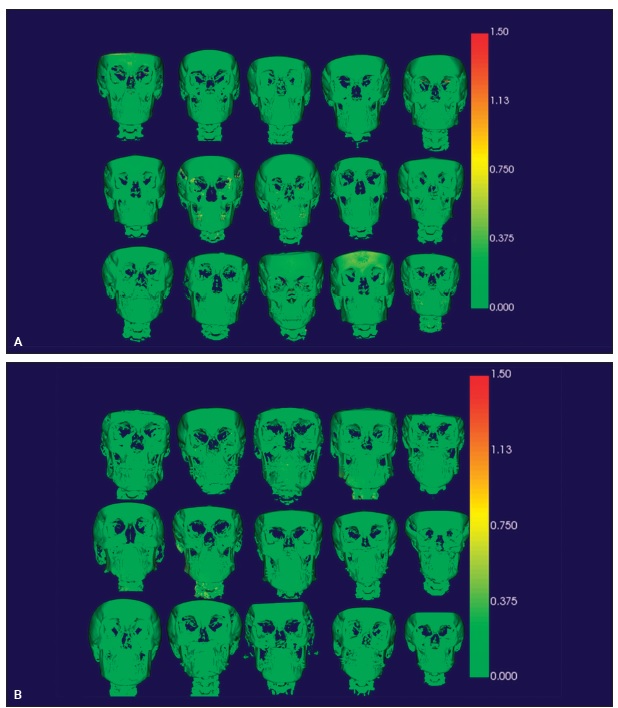 Software updates often include new diagnostic or outcome assessment methods that have not been validated or independently evaluated prior to release. Such a market introduction is then followed by competitive imaging packages from other companies. To ensure proper orthodontic diagnosis, outcome assessment, and communication, it is essential that these different software packages produce consistent results. For example, the measured angulation of a lower incisor relative to the mandibular plane should be about the same regardless of the software used, so that every orthodontist can evaluate the situation in the same way. Unfortunately, this kind of consistency has not always been achieved during the transition from 2D to 3D diagnostic systems.4 The purpose of the present study was to compare the accuracy of rapid voxel-based superimpositions from two commercially available software programs.

Although voxel-based superimpositions are mostly automated, using thousands of landmarks and density data, their accuracy still depends on identifying an area in which changes will not occur between two time points, based on the clinician’s knowledge of facial growth and development. Voxel-based superimposition reduces the impact of operator error, but does not completely eliminate it. Studies such as ours demonstrate only that different algorithms will arrive at the same result. In this case, both software packages were shown to provide user-friendly voxel-based superimposition tools for clinical use.

ACKNOWLEDGMENT: The authors would like to thank the AAO Foundation for its support. 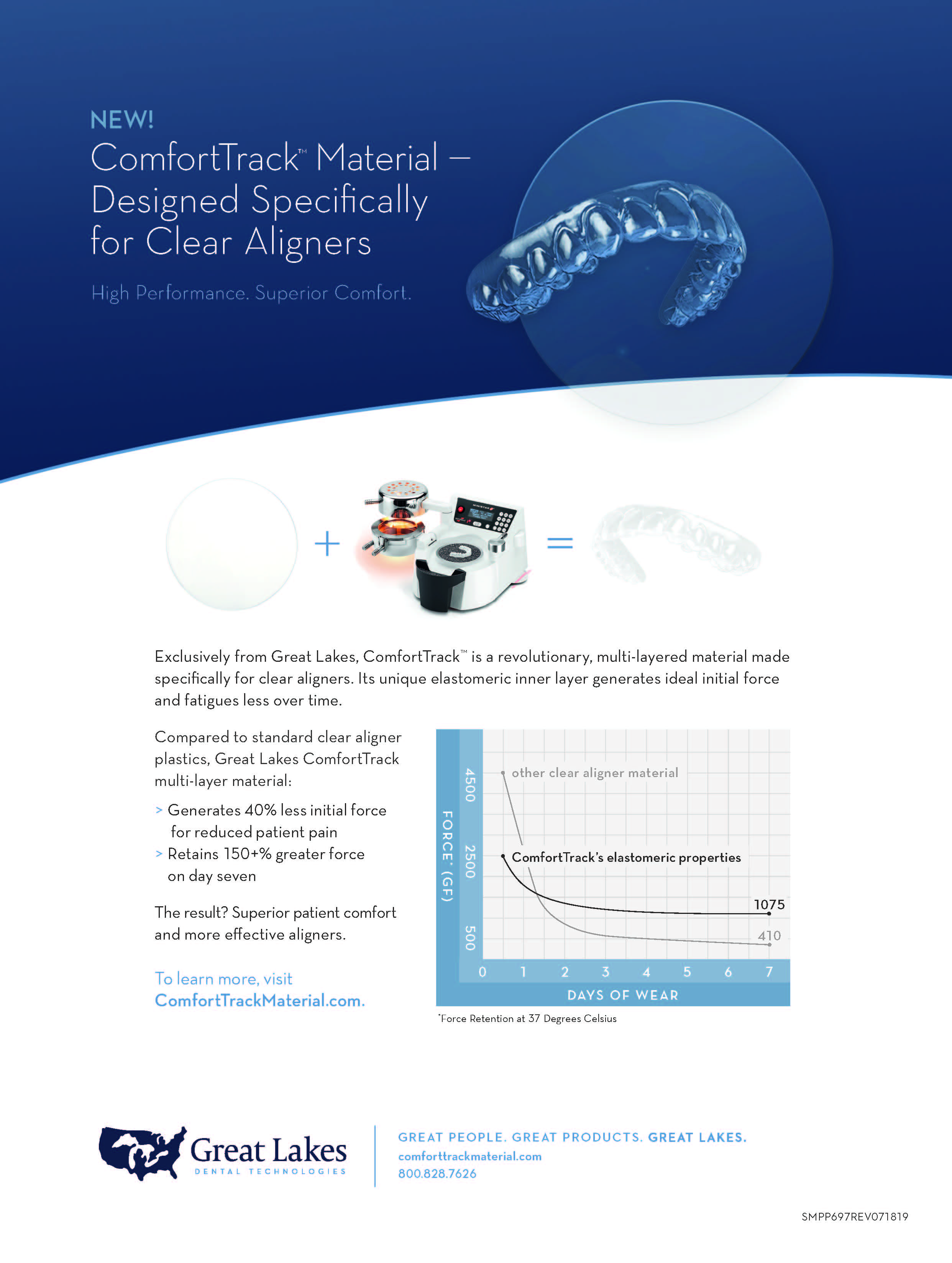 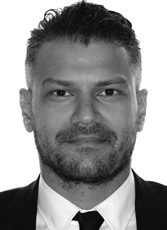 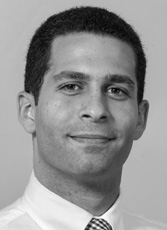 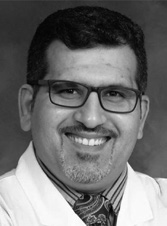 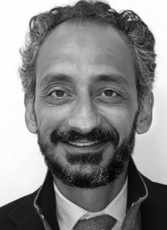 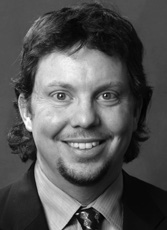