This column is compiled by JCO Technology Editor W. Ronald Redmond, DDS, MS. To help keep our readers on The Cutting Edge, Dr. Redmond will spotlight a particular area of orthodontic technology every few months. Your suggestions for future subjects or authors are welcome.

The authors of this month's Cutting Edge column have taken on a question that I pondered several years ago: How accurate is a two-dimensional facial photograph that has been stretched" over a three-dimensional cone-beam computed tomography (CBCT) volume using Anatomage* software? Although my query was born of simple academic curiosity, it is now a practical matter, as more orthodontists and orthognathic surgeons are becoming reliant on 3D analysis to diagnose and treat complex facial asymmetries.

In this study, the authors compared direct anthropometric facial measurements of 30 adults to measurements taken from 2D photographs of the same individuals that were wrapped over CBCT volumes. The results exceeded my expectations: there were no statistically significant differences found for 13 of the 14 measurements compared by the authors. Only the difference in the anteroposterior measurement from the tip of the nose (C') to the junction of the nose and upper lip (SN) proved statistically significant - indicating that special care needs to be taken when using predictive orthodontic and orthognathic soft-tissue modeling analyses in this region.

Considerable research has been focused on creating a precise replica of the head. As imaging technology has advanced, the importance of facial analysis has increased, placing even more emphasis on soft-tissue evaluation in diagnosis.1

In orthodontic treatment planning and orthognathic surgery, 3D imaging is considered the most accurate method of representing the face.2 Two-dimensional representations increase the likelihood of clinical inaccuracies, since the information is contained within a single plane of space.3 In contrast, 3D models are effective in locating the source and magnitude of deformity. They can be manipulated in any direction, thus providing valuable information to the orthodontist without the need for patient recall or the time constraints of clinical examination.

One method used to obtain a 3D facial model is to register the skin-surface images acquired by stereophotogrammetry and layer them over a CBCT image, using portable stereometric cameras optically linked with a simple plotting instrument.4 This process is expensive and time consuming. The CBCT and stereophotogrammetry need to be performed simultaneously to avoid changes in facial expression that could lead to errors.5 Moreover, the procedure is slow, making distortion of the scanned image more likely.6,7

A relatively easy method of obtaining a 3D facial model involves wrapping a 2D facial image over a CBCT volume using imaging software. Because this procedure does not require expensive equipment such as a 3D camera setup, it is gaining popularity. The present study was designed to evaluate the accuracy of volume wrapping compared to anthropometric measurements made directly on the face.

Easily identifiable, reliable reference points were chosen for the comparative measurements (Fig. 1).8-10 At the time of the scan, direct anthropometric facial measurements were made directly on the patient's face with a sliding caliper (Table 1). A 2D photograph was also taken of the patient in natural head position, using a digital single-lens reflex camera (Nikon D3100*** with 18-55mm lens) at a standardized distance of 3m.11

Each patient's photograph and CBCT scan were sent to Anatomage, and the 2D image was volume-wrapped over the CBCT scan to produce a 3D facial model (Fig. 2). The facial measurements were then repeated on the 3D facial model using Anatomodel* software. 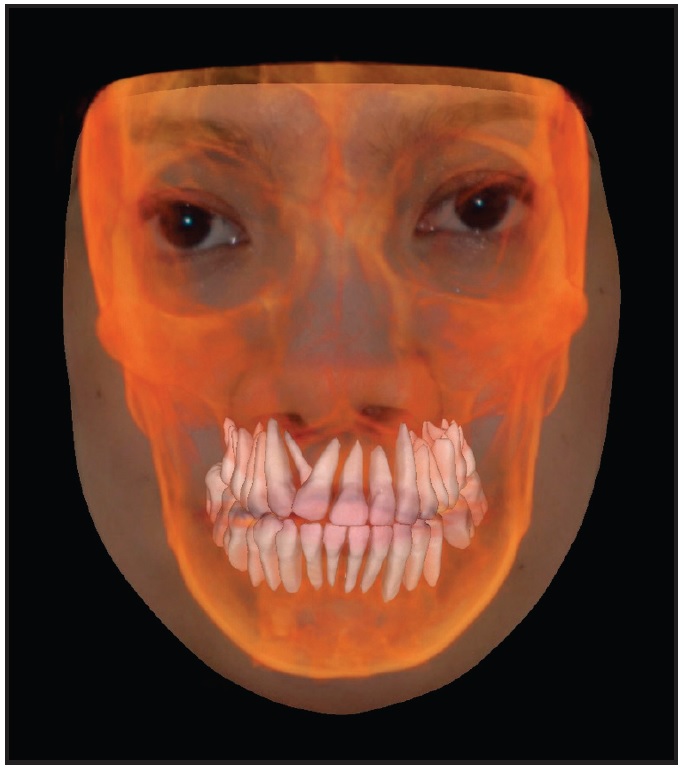 The measurements obtained from the CBCT were compared with those taken directly from the face, using paired t-tests (Fig. 3). Intra-examiner reliability was determined by repeating the same measurements two weeks later and comparing the results with a paired t-test.

Direct anthropometry is considered the gold standard for in vivo soft-tissue assessment; it is simple and relatively inexpensive, and it does not require complex instrumentation.12 Various methods have been proposed to obtain equally accurate 3D facial models, including 3D laser scanning, video imaging, 3D stereo cameras, digital color portraits, and volume wrapping. Of these, volume wrapping is the least time-consuming and easiest for the clinician, since most of the labor is performed by the imaging company. The technique is now used routinely by orthodontists and oral surgeons to simulate surgeries, but has not previously been evaluated in comparison with direct measurements of the face.

Of the 14 measurements selected for our study, only columellar length showed a statistically significant difference between direct anthropometry and volume wrapping. This anteroposterior distance appears to be difficult to capture and measure on the superimposed 2D photographs, making the volume-wrapped 3D facial models vertically deficient in that area. Although the difference we found was minor, it might have an impact when simulating various facial or skeletal movements, since the nose is often the first thing the patient notices in such simulations. Caution should therefore be exercised by surgeons and orthodontists when simulating surgical movements on volume-wrapped 3D facial models.

The volume-wrapped 3D facial model appears to be a fast and easy way to obtain accurate facial dimensions without having to measure directly on the face. More studies are needed to further validate it as a useful diagnostic and treatment-planning tool for replicating the face in three dimensions.