Effectiveness of Composite Attachments in Controlling Upper-Molar Movement with Aligners

In nonextraction treatment, upper-molar distalization is often the method of choice to gain 2-3mm of arch space and obtain a Class I relationship.1 To achieve bodily movement, either the applied force must pass through the tooth's center of resistance or a sophisticated equivalent system of forces and moments must be applied to the molar crown.2,3

Although a systematic study has found aligners to be more effective than fixed appliances in treating mild-to-moderate crowding,4 Brezniak has suggested that bodily movement is not possible with aligners, even when composite attachments are used.5 Recent studies indicate, however, that the forces and moments generated by Invisalign* trays are within the range of orthodontic forces.6,7 Simon and colleagues also reported a high degree of accuracy of upper-molar bodily movement with aligners when a distalization movement of at least 1.5mm was prescribed, attributing any significant difference to the use of attachments.6 These observations were made in the horizontal plane; tipping effects were not analyzed.

Tipping movements are difficult to control during molar distalization with aligners because of the trays' limited contact with the tooth surfaces in the direction of force application.8 Gomez and colleagues showed that when an aligner segment was displaced distally without attachments, a clockwise moment and distal inclination were produced on the upper canine.9 Vertical rectangular attachments on the buccal aspects of the molars helped counteract this inclination tendency by producing a countermoment that promoted bodily movement.9

The present case-control study was designed to test the hypothesis that the number of long vertical attachments on the distalizing teeth has no effect on the amount of bodily upper-molar movement achieved with aligner therapy.

Thirty consecutive non-growing Invisalign patients (12 males, 18 females; mean age 30.50) were randomly assigned to two experimental groups based on the number of attachments used to control their distalized molars (Fig. 1). The randomization sequence** involved patients in two orthodontic clinics: one in Turin, Italy, and one in Vancouver, British Columbia. In the Case 1 (C1) group (seven males, nine females; mean age 29.24), rectangular composite attachments were placed on all distalized teeth from canine to second molar (five attachments per quadrant). In the Case 2 (C2) group (five males, nine females; mean age 31.75), attachments were used only on the first and second premolars and the first molar (three attachments per quadrant), based on a previously described protocol.10 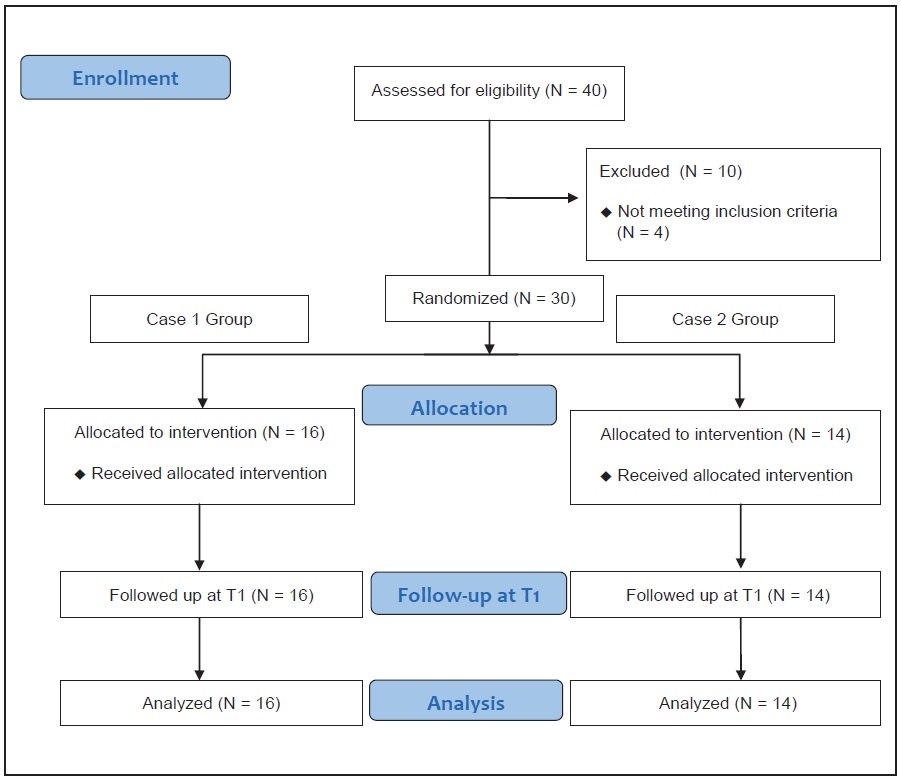 As a control (C) group, 20 subjects matched by age and sex to the study group were selected from the following collections of the AAO Foundation Craniofacial Growth Legacy: Case Western Reserve University Bolton-Brush Growth Study, Oregon Growth Study, and University of Oklahoma Denver Growth Study. The diagnostic criteria for both study and control groups were the same: a half-cusp Class II molar relationship, a need for molar distalization, maxillary dentoalveolar protrusion, and normodivergence of the vertical plane (palatal plane to mandibular plane angle of 20º ± 5º). Exclusion criteria were transverse dental or skeletal discrepancies, vertical dental or skeletal discrepancies, extraction treatment (except for third molars), unilateral distalization, signs or symptoms of TMD according to standard diagnostic criteria,11 periodontal disease, and endodontic treatment or prosthodontic rehabilitation of the upper molars.

Each patient provided informed consent, and the study was conducted in accordance with the Declaration of Helsinki and approved by the Lingotto Dental School Ethical Committee at the University of Turin. All patients were treated by Dr. Garino, Dr. Castroflorio, or Dr. Daher.

Prior to the start of treatment, the patients' upper third molars (if present) were extracted to make room for molar distalization.10 Initial (T0) and post-treatment (T1) lateral radiographs were taken using three x-ray machines; for standardization purposes, the magnification was corrected to 8%.

Initial cephalograms (T0) were obtained for the 20 subjects of the control group. A second set of images (T1) was obtained for the same subjects at least two years later, or at the age corresponding to the mean age of the experimental groups at the end of treatment.

All digital x-rays were stored on a computer and imported into OrisCeph Rx3*** software for landmark identification and cephalometric tracing. Operations were performed in random order by a single investigator (Dr. Ravera), who was blinded to the study, using a customized digitization set including 47 landmarks and 54 variables.

The reference axes were the palatal plane (x-axis) and a line perpendicular to the palatal plane passing through the Ricketts PT point (yaxis).12 The occlusal plane was also traced, passing through the upper central incisor edge and the mesial cusp of the first molar (Fig. 2).13 The palatal plane/mandibular plane (PP/MP) and sella-nasion/mandibular plane (SN/MP) angles were used as indicators of skeletal posterior vertical changes. Overall craniofacial treatment changes were evaluated by superimposing on SN at sella.

Maxillary regional superimpositions were made along the palatal plane (internal structures of the maxilla) and the constructed y-axis to assess only the amount of molar distalization,14 since adults exhibit no substantial changes in the palatal plane. In case of a difference between the left and right sides of the superimposition, the more distally positioned landmark was chosen.

ClinCheck* software was used to plan a maximum movement of .25mm per aligner. When the upper second molars had been distalized two-thirds of the way, the first-molar retraction was scheduled to begin, similarly followed by the premolars.10 The canines and incisors were sequentially retracted after the first premolars were in their final positions. To maintain proper buccolingual inclination during distalization of the upper incisors, Power Ridge* features were prescribed for placement after intrusion had been completed.15 No interproximal reduction was performed in the upper arch. All prescriptions were reviewed and submitted by Dr. Castroflorio.

The average number of required aligners was 42.6 in the upper arch and 21.4 in the lower. Patients were instructed to wear their aligners and 3/16", 4.5oz Class II elastics† at least 22 hours per day, starting at first-molar distalization and continuing until a full Class I canine relationship was achieved.16 The interval between appointments was six to eight weeks, with each set of aligners worn for two weeks. A refinement phase with a mean 9.1 upper aligners and 6.7 lower aligners was ordered for each case; aligners were worn for 10 days each during refinement. Mean total treatment time was 24.3 months.

The statistician (Mr. Cugliari) was blinded to the orthodontic characteristics of the two study groups. Since no previous data were available regarding the effect of the number of attachments on the amount of upper-molar distal movement, we considered a 20% increase in movement of the first molar to be clinically relevant, with 80% power at the 5% significance level. The required sample size was 14 subjects, as calculated by Survey System‡ software.

Statistical analysis was performed using the R version 3.0.1†† statistical package. Differences between the two experimental groups before treatment (C1T0 - C2T0) were evaluated by means of Fisher's exact test for qualitative variables and the unpaired t-test for quantitative variables. The normality assumption of the data was measured using the Kolmogorov-Smirnov and Shapiro-Wilk tests, and homogeneity of the variables with the Levene and Brown-Forsythe tests.

To estimate the error of the method, 30 randomly chosen cephalometric radiographs were traced, digitized, and analyzed by the same examiner three weeks and six months after the first assessment. Dahlberg's error was less than .5, indicating good intra-observer accuracy and reliability.17

Case 1 results can be found here.

Distal movement of the central incisor was significant (p < .05) at the incisal edge (2.48mm) and center of the crown (1.58mm), but not at the root apex. The incisor retraction was associated with significant intrusion (.91mm, p < .05), but no significant inclination.

Case 2 results can be found here.

Comparison of Case 1 and 2 Groups

Comparison of Case 1 and 2 group results can be found here.

The only significant differences were for the sagittal positions of the upper molars and central incisors at T1.

Several articles have demonstrated the possibility of achieving Class II correction using clear aligners without attachments.18-23 It should be noted, however, that these were mainly case reports. To our knowledge, the present study represents the first attempt to establish a reliable clinical approach for correcting Class II malocclusions with aligners.

Our two experimental groups showed no significant differences in the amount of second-molar movement with or without vertical rectangular attachments (Fig. 3).

There was significantly more distal movement of the first molar and central incisor, however, in the Case 1 group, where attachments were placed on five teeth. In particular, bodily movement of the incisor was more accurately controlled in this group. This demonstrates that vertical attachments not only control tipping during molar distalization, but also enhance posterior anchorage during anterior retraction. In the Case 2 group, without attachments on the second molars, a loss of anchorage during first-molar distalization appeared to result in less distal movement of the second molar and significant tipping of the first molar. The lack of anchorage preparation in the posterior segment also inhibited control of the anterior teeth during retraction, leading to uncontrolled tipping of the central incisors (Fig. 4).

Fig. 4 Representative superimpositions of pre- and post-treatment cephalometric tracings in Case 1 (A) and Case 2 (B) groups.

The vertical pattern is an important consideration in planning molar distalization. In our Case 1 group, distal movement was associated with significant molar intrusion. The thickness of the aligners and the occlusal force exerted on them tend to promote intrusion and thus avoid any change in the anterior vertical dimension during distalization. Gomez and colleagues reported a marked flaring tendency of the buccal and palatal aligner segments during distal displacement,9 which would also suggest an intrusive effect.

The main limitation of our study was the absence of a group treated with a different technique. Of course, any investigation has the potential for selection or participation bias.

In a case-control study of adult Class II Invisalign patients, the upper first and second molars were each distalized about 2mm, accompanied by intrusion of about 1mm, when vertical rectangular attachments were placed on all five distalized teeth. This approach appears to be effective in minimizing distal crown tipping and preventing molar extrusion, anterior anchorage loss, and undesirable changes in lower facial height. Therefore, clinicians should consider the use of such attachments in non-growing patients requiring 2-3mm of bodily upper-molar distalization.

Fig. 4 Representative superimpositions of pre- and post-treatment cephalometric tracings in Case 1 (A) and Case 2 (B) groups.