Recent advances in Invisalign* design and materials have made adult orthodontics far more appealing in a wider range of cases. This article demonstrates the use of the Invisalign system for the correction of Class III malocclusion after extraction of a lower incisor.

Orthodontic camouflage treatment of an adult patient with moderate Class III malocclusion can often be facilitated by the extraction of a lower incisor.3 There is some evidence that the results achieved with lower-incisor extractions are more stable than those produced by premolar extractions. 4 When deciding which incisor to extract, however, the clinician must consider the archlength discrepancy, the periodontal and dental status, and the relationship of the dental midlines to each other and to the midfacial axis.5

Situations in which extraction of a lower incisor may be considered as part of an orthodontic treatment plan include:

Extraction of a lower incisor is contraindicated in the following clinical situations:

Kokich and Shapiro strongly advocated the use of a diagnostic setup in lower-incisor-extraction cases to predict the precise occlusal result.3 Although this would traditionally have been carried out by a laboratory technician, it is now possible to visualize a treatment result in three dimensions using Invisalign's ClinCheck** software, as the following two cases demonstrate.

A 32-year-old female presented with the chief complaints of irregular front teeth and an inability to bite in the front because the lower teeth were ahead of the upper teeth. Clinical examination showed a Class III incisor relationship on a Class III skeletal base, with average lower-anterior facial height and a deficient Frankfort-mandibular plane angle (Fig. 1). 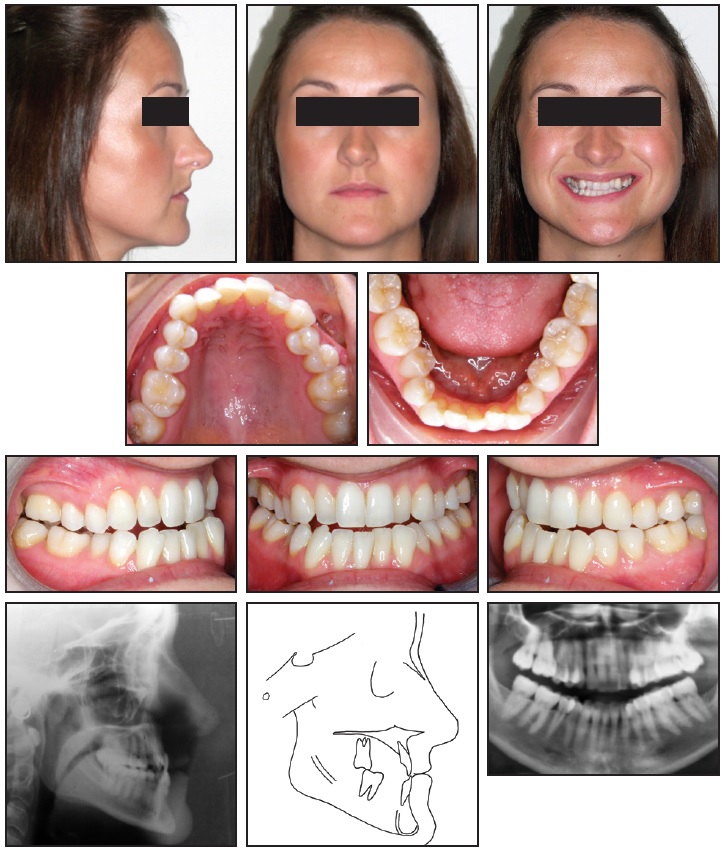 The overjet was -2mm to the upper left lateral incisor; the overbite was reduced but incomplete, with an anterior open bite measuring 2mm at its worst point. We noted mild upper and moderate lower crowding, a lower midline shift to the left, and a bilateral buccal crossbite tendency. The panoramic x-ray demonstrated proper alveolar bone levels and root morphology, along with the presence of all permanent teeth except for the lower left lateral incisor, which had previously been extracted. Cephalometric analysis confirmed a Class III skeletal base with normally inclined upper incisors and retroclined lower incisors (Table 1).

Because the patient did not want to wear visible appliances, treatment was planned with the Invisalign system. Space would be created in the upper arch by proclination of the upper incisors and a modest amount of expansion. Extraction of the lower right central incisor, which was the most proclined and had the least satisfactory gingival contour of the remaining incisors, would provide space for relief of the lower crowding, while the incisor relationship would be corrected by minor retroclination. The objective was to maintain the Class III molar relationships and improve the overbite, accepting a lower midline discrepancy.

Polyvinyl siloxane (PVS) impressions and a silicone bite registration were sent to Align Technology for the creation of pretreatment and projected end-of-treatment ClinChecks (Fig. 2A,B). We asked for slower staging to reduce the rate of tooth movement by half, to .15mm per aligner. 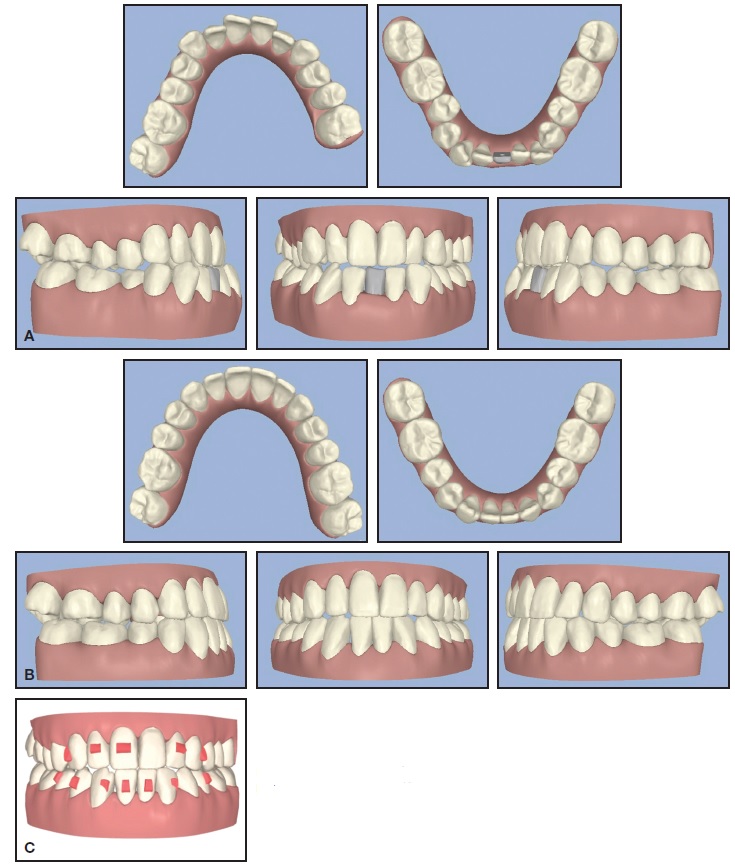 A series of 29 aligners was fabricated, and the patient was instructed to wear each pair at least 20 hours a day for two weeks (Fig. 4).

To promote root uprighting, sequential staging was performed on the teeth on either side of the extraction space were moved by the first three to four aligners, using the rest of the arch as anchorage, before the remaining teeth were repositioned.

The Invisalign pontic system was used as a visual substitute for the extracted incisor (Fig. 5). A bonding adhesive is applied to the inner surface of the aligner tray and let dry for 60 seconds before the tooth-colored PVS pontic is positioned in the aligner and allowed to set for five minutes. In the final stages, as the lower-incisor extraction space was closed, the pontic was omitted.

Toward the end of treatment, composite buttons were bonded to the upper first molars and lower canines, and the aligner trays were modified for attachment of Class III elastics for finishing. Three refinement aligners were required.

The arches were well aligned, with positive overjet and improved overbite (Fig. 6, Table 1). 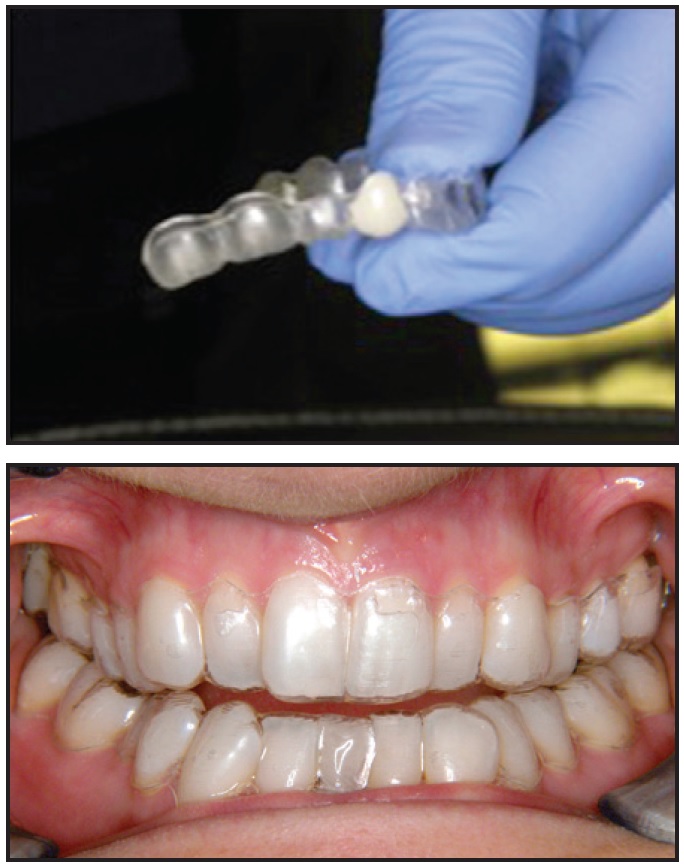 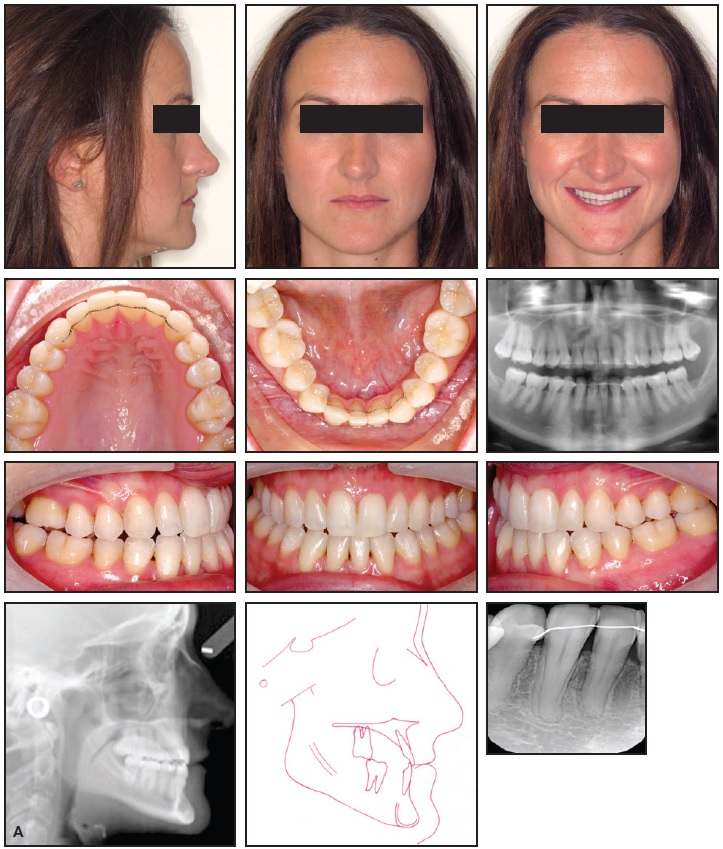 A good esthetic result was achieved after closure of the lower-incisor extraction space. The panoramic radiograph confirmed bodily tooth movement, with the roots of the remaining lower incisors almost completely parallel. A periapical radiograph showed no apical pathology of the lower right lateral incisor, as was suggested by the panoramic x-ray.

A 37-year-old male presented with the chief complaint of irregular front teeth and an almost edge-to-edge bite. Clinically, he demonstrated a Class III incisor relationship on a Class I skeletal base, with average lower-anterior facial height and a normal Frankfort-mandibular plane angle (Fig. 7). 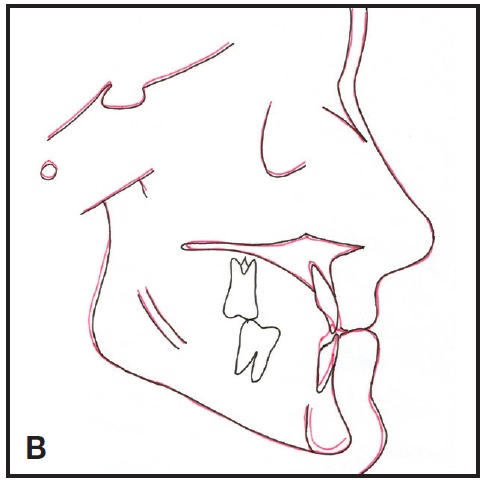 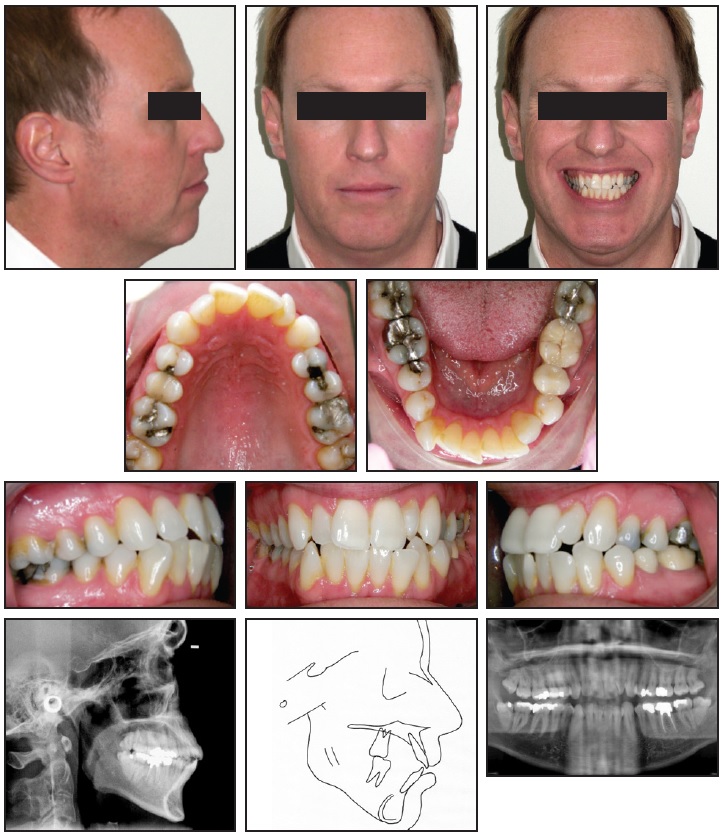 The overjet was 1.5mm to the upper right central incisor, and the overbite was complete. The upper arch was moderately crowded, with a mesiolabially rotated left lateral incisor; the lower arch was mildly crowded, with proclined incisors and a left first premolar in buccal crossbite. The lower posterior dentition had been extensively restored. The pretreatment panoramic x-ray confirmed the presence of all permanent teeth, with normal alveolar bone levels and root morphology. Cephalometric analysis confirmed the Class I skeletal base and slightly proclined upper incisors (Table 3).

Invisalign treatment was designed to create space in the upper arch by controlled proclination of the incisors. In the lower arch, extraction of the left lateral incisor, which was the most proclined in the segment and showed signs of labial gingival recession, would provide space for relief of crowding and correction of the incisor relationship. The aim was to achieve Class I molar relationships with a lower incisor bisecting the upper central incisors.

Pretreatment and projected end-of-treatment ClinChecks were generated and presented to the patient (Fig. 8A,B). The teeth were programmed for no more than .15mm of movement per stage - about half the maximum rate. 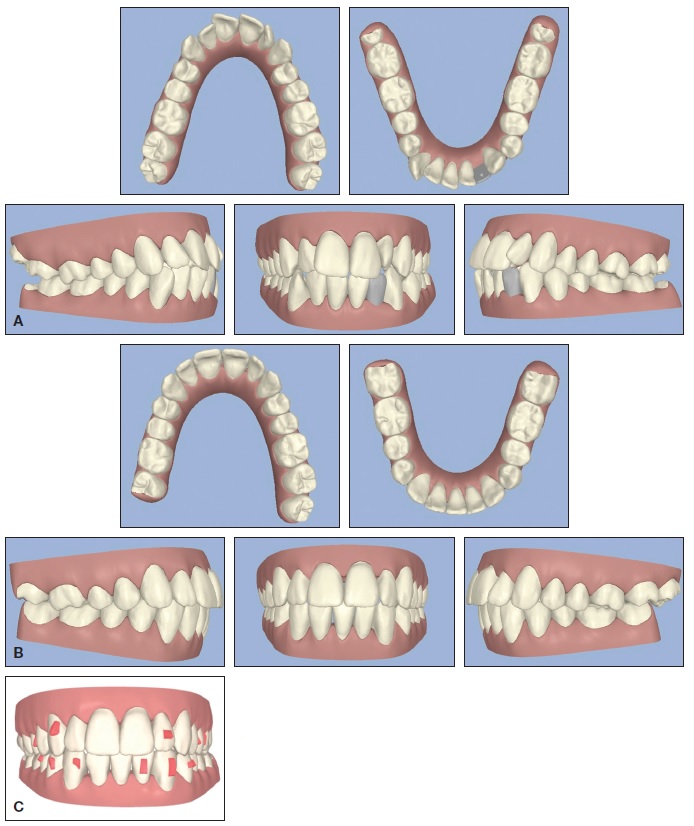 A series of 34 aligners was fabricated, with the patient instructed to wear each tray at least 20 hours a day for two weeks. PVS pontics were incorporated in the early stages of treatment to replace the extracted lower incisor (Fig. 8D).

As in Case 1, Class III elastics were used toward the end of treatment to allow complete correction of the Class III incisor relationship and the achievement of positive overjet and overbite. No refinement aligners were needed. 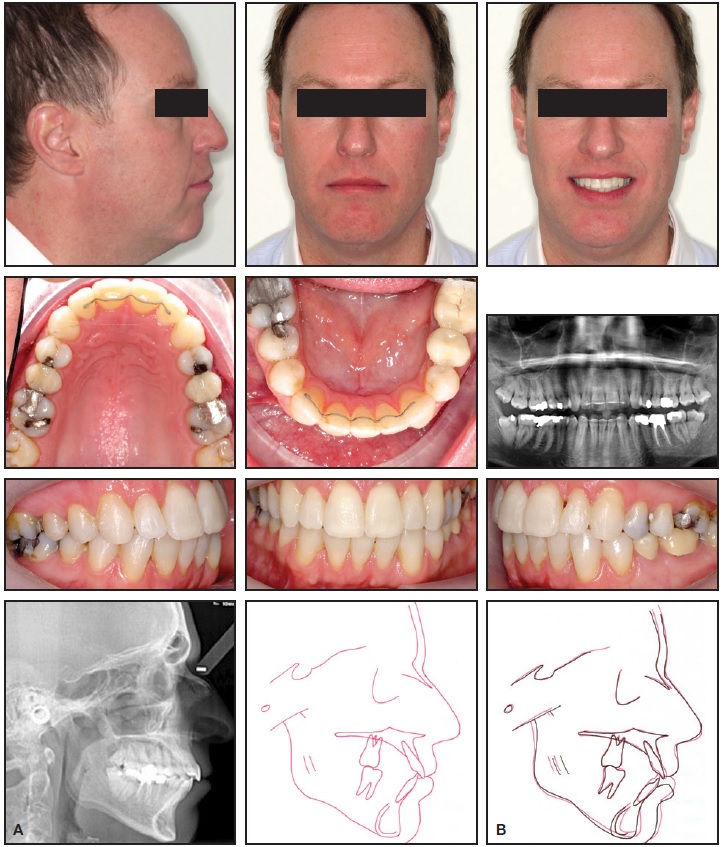 Fig. 9 Case 2. A. Patient after 17 months of treatment. B. Superimposition of cephalometric tracings.

The panoramic x-ray indicated bodily tooth movement rather than simple tipping movements, with parallel incisor roots adjacent to the extraction site thanks to the use of vertical rectangular attachments and sequential staging.

When Invisalign was introduced, it seemed to offer a simple solution for the treatment of mild-to-moderate malocclusions. Although there is still a lack of high-quality evidence for evaluation of the Invisalign system,6 the development of improved attachments and the ability to incorporate intermaxillary elastics have significantly improved the scope of cases that may be treated. In addition, the introduction of SmartTrack* aligner material in 2013 has provided more constant force application, greater elasticity, more precise aligner fit, and improved patient comfort. Clear aligners are especially popular among adults because they are more esthetic, comfortable, and easily maintained than fixed appliances. Of course, since compliance with aligner wear is fundamental in achieving success with Invisalign treatment, careful patient selection is vitally important.

During space closure with the Invisalign system, the roots of the teeth adjacent to the extraction site are uprighted with sequential staging, while vertical rectangular attachments minimize tipping. The sequential movement gradually creates .5 - 1mm of space between the lower incisors and allows the Invisalign plastic to wrap around the teeth, generating reliable bodily movement toward the extraction space. In the final stage of treatment, the aligners engage the natural undercuts around the lower incisors for further root uprighting.

Long-term fixed and removable retention is critical in cases such as these, where the incisors are being proclined or retroclined as they are moved out of the neutral zone of soft-tissue balance. Patients must be made aware of the potential for relapse if they wish to maintain the alignment of their teeth indefinitely.

Fig. 9 Case 2. A. Patient after 17 months of treatment. B. Superimposition of cephalometric tracings. 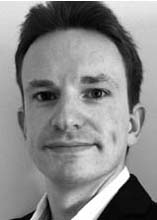 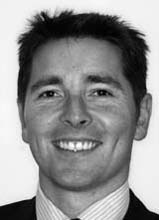 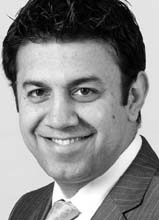