Clear aligners have been increasingly utilized by orthodontists in recent years. Originally directed toward the correction of mild orthodontic problems in adults,1-5 this approach became more challenging when applied to complex anteroposterior discrepancies and orthodontic movements such as intrusion of posterior teeth, extrusion of anterior teeth, and torquing.4,6,7 Specifically, clinicians encountered difficulties with bodily movement of teeth,3 especially after the extraction of four premolars in a situation requiring maximum anchorage.

Obviously, successful treatment with clear aligners involves much more than moving virtual teeth in a software program and dispensing plastic to patients.8-10 The application of adjunctive biomechanics through the addition of orthodontic elastics, springs, and other devices has certainly created more individualized options for predictable tooth movement across a wider range of malocclusions. Miniscrew implants, which have been effective in supporting anchorage for orthodontic tooth movement,11 are now being used as adjuncts to clear-aligner treatment as well.

The present three-part article describes a variety of treatment methods that can expand the clinical applications and improve the predictability of clear aligners. This month, we discuss several options for Class II treatment. Parts 2 and 3 will illustrate a variety of tooth movements. It should be noted that success in any of the case types presented here will depend on proper diagnosis, detailed treatment planning, and, most important, patient compliance.

At the dawn of sequential clear-aligner treatment, no substantial thought was given to the mechanics that would be required to address Class II or III malocclusions, leading to the widespread belief that "buccal malocclusions" were contraindications.2,6,12 During the ensuing 15 years, however, a number of methods have been proposed to treat both growing13 and adult Class II cases with aligners. The application of elastics to bonded buttons, brackets, or notches cut into the aligner material was an obvious first step.8 More recent adjuncts have included fixed functional appliances,14 molar distalizers,15 and miniscrew anchorage.16

In a mild Class II or pseudo-Class I case, maxillary molar rotation with aligners may suffice to at least improve the molar relationship.17 With any tooth movement, however, there is a price to be paid in loss of anchorage. That axiom was "rediscovered" during initial attempts at molar distalization with aligners alone. A Class II case usually involves a struggle between the anchorage control needed to avoid iatrogenic mesial movement of lower anterior teeth and the patient compliance required to achieve that control.

The application of Class II intermaxillary elastics to clear aligners adds a further compliance burden.18 Since Class II correction in a growing patient is derived primarily from the interruption of dentoalveolar compensation (whether from headgear, elastics, functional appliances, or distalization), sequential molar distalization supported by elastics, as advocated by Daher,19 is a logical strategy that has proven successful with aligners (Fig. 1 AB, C).20 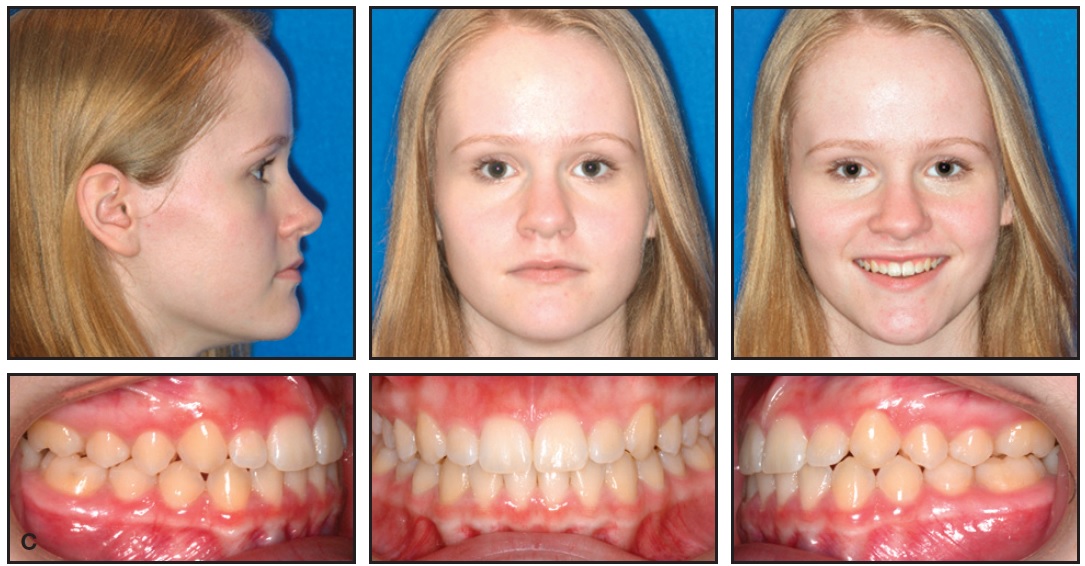 Fig. 1 (cont.) C. Mild overcorrection to super-Class I achieved in 17 months, including one refinement.

In an adult patient, on the other hand, Class II correction comes primarily from tooth movement without the benefits of growth; therefore, more anchorage control is required. Miniscrew anchorage fills that bill quite nicely. In a typical case, an adult male with the chief complaint of a "snaggle tooth" presented with a unilateral Class II malocclusion and significant anterior crowding (Fig. 2).

Although distal movement of the upper left posterior quadrant was needed, anchorage control was a concern. To improve the predictability of the aligners' distal drive, a miniscrew was inserted into the palatal alveolus between the roots of the left first and second molars.21 A nickel titanium closed-coil spring was extended anteriorly from the miniscrew to a "power arm" bonded to the palatal surface of the first premolar, obviating the need for Class II elastics. The advantages of placing miniscrews in the palate include a substantially lower failure rate, the availability of larger interradicular spaces than on the buccal, and the ability to apply forces closer to the center of resistance, thus avoiding unwanted tipping. Mesially beveled attachments were also placed on the premolars to improve tracking during distalization. The clear aligners' primary task in this scenario was to guide and contain the selected teeth during the programmed retraction. A substantial improvement in the posterior occlusion and anterior esthetics was achieved in 18 months of treatment without elastics, using 52 aligner pairs (including two refinements).

Miniscrew anchorage has also been used to provide simple "posts" for the patient's attachment of either intermaxillary or intramaxillary elastics to bonded buttons, hooks, or simple notches cut into the aligners themselves.16,22 For example, a young adult female with a unilateral Class II malocclusion, generalized maxillary spacing, and moderate overjet exhibited significant anchorage issues (Fig. 3).

While Class II elastics would certainly be required during the Invisalign* treatment to assist in space closure, upper-molar distalization was also needed to correct the Class II malocclusion. Miniscrews were inserted into the buccal alveolus between the roots of the upper first molars and second premolars. Class I intramaxillary elastics were prescribed as a "headgear substitute"; combined with Class II elastics, they produced a net force vector that drove the maxillary dentition distally. Because some space closure was also desired from protraction of the lower posterior teeth, the anchorage loss in the mandibular arch as a result of the Class II elastics was not a major concern. What was disconcerting was a lack of patient compliance, which resulted in unacceptable tracking of the anterior teeth and inadequate upper lingual root torque.

The attachment of orthodontic elastics to clear aligners is simplified by bonding buttons, hooks, or brackets to selected teeth. Sections of the aligner plastic must be removed to seat the aligners over these adjuncts. This can easily be accomplished with the Hole Punch*** plier, designed to punch out a half-circle at the gingival margin of each tray in a series (Fig. 4A). The Tear Drop plier is then used to cut a teardrop shape along the gingival margin of the aligner, creating a "hook"for the application of elastics (Fig. 4B). 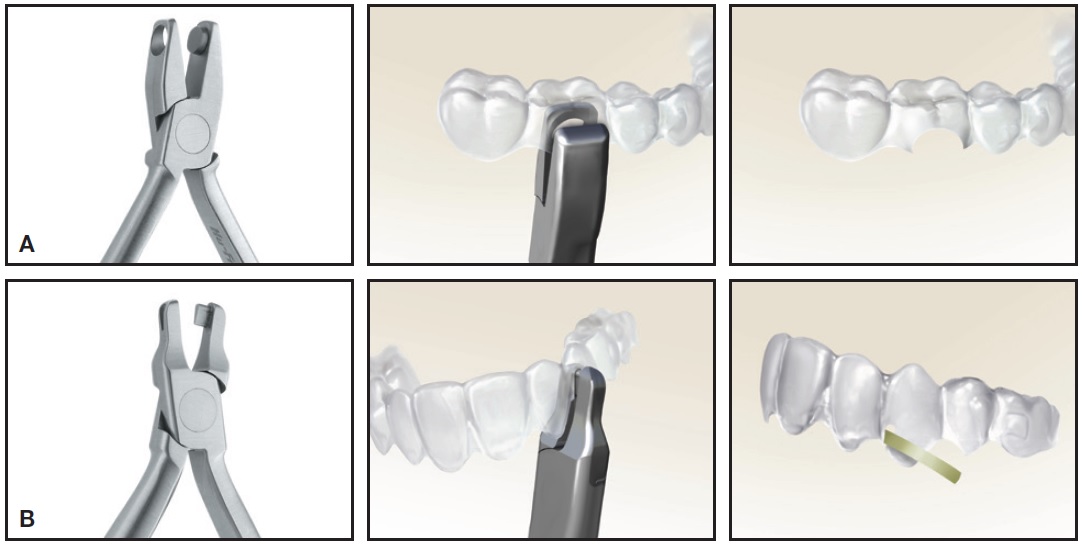 Molar Distalization Prior to Aligner Treatment

Concerns about the predictability of Class II correction with only elastic support have prompted orthodontists to consider aligner treatment as a follow-up to molar distalization, much as they would use fixed appliances for finishing. One such method involves the Carriere Distalizer†, which is bonded to the upper molars and canines of one or both sides as needed.23,24 Class II elastics are attached between hooks on the canine and the lower first molar to produce molar rotation and distalization of the buccal segment. The Distalizer is then removed, and impressions or digital scans are taken for clear-aligner treatment.15 A retainer should be inserted immediately to prevent any mesial rebound of the distalized teeth during the time needed for laboratory fabrication of the aligners.

Because the Carriere Distalizer is visible at the upper canine and typically creates a space be tween the upper canine and lateral incisor, its esthetic appearance should be discussed with the patient, along with the absolute necessity of compliance with elastic wear. In addition, Class II elastics will tax mandibular anchorage, which can be enhanced with the use of lower brackets, lingual arches, full-coverage plastic retainers, or even concurrent lower aligner treatment.15,18,23,24

The compliance and anchorage issues have typically limited this approach to milder Class II and pseudo-Class I patients. In a more severe Class II case, skeletal anchorage can be employed by inserting a miniscrew between the roots of the upper first molar and second premolar (Fig. 5).

Elastic chain is then applied from the miniscrew "post" to the canine hook of the Distalizer, applying a constant retraction force even if Class II elastics are not worn. In any event, it is important to continue to prescribe Class II elastics during clearaligner treatment to support anchorage during retraction of the remaining maxillary teeth and thus avoid unintended loss of any distalization that has been achieved.

Another option for accomplishing molar distalization as a precursor to aligner treatment is to use a stand-alone appliance such as the Pendulum‡25 or Distal Jet††.26 Although these devices require no patient compliance and are relatively esthetic (being inserted in the palate), some attendant maxillary anterior anchorage loss is possible. Miniscrew anchorage has substantially improved the predictability of these appliances in delivering the desired molar corrections. Indeed, the Horseshoe Jet‡‡, a skeletonized modification of the Distal Jet, was designed to be supported by miniscrew anchorage, thereby avoiding anterior anchorage loss.22,26-29 Miniscrews are inserted in the palatal alveolus between the roots of the first molar and second premolar (generally the largest available interradicular space) or in the anterior palate. Stainless steel ligatures are tied from the miniscrews to hooks on the anterior portion of the Ushaped wire framework to support distalization forces from compressed-coil springs. The molars are distalized--and the premolars follow due to forces from the transseptal fibers--into super-Class I or partial Class III positions within six to eight months (Fig. 6 AB, C-E). 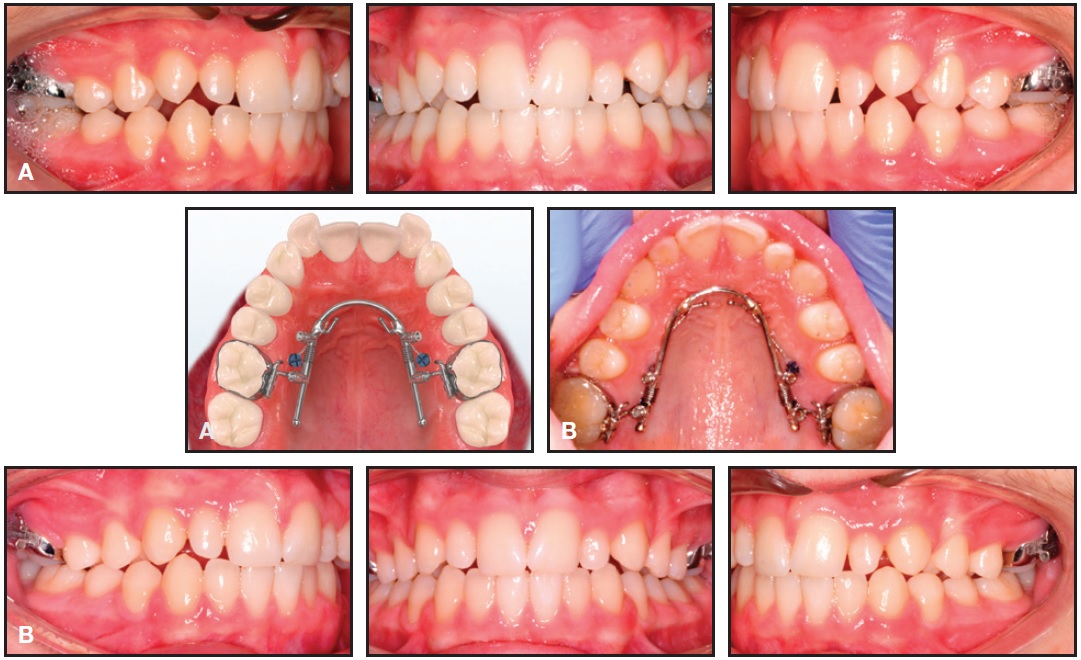 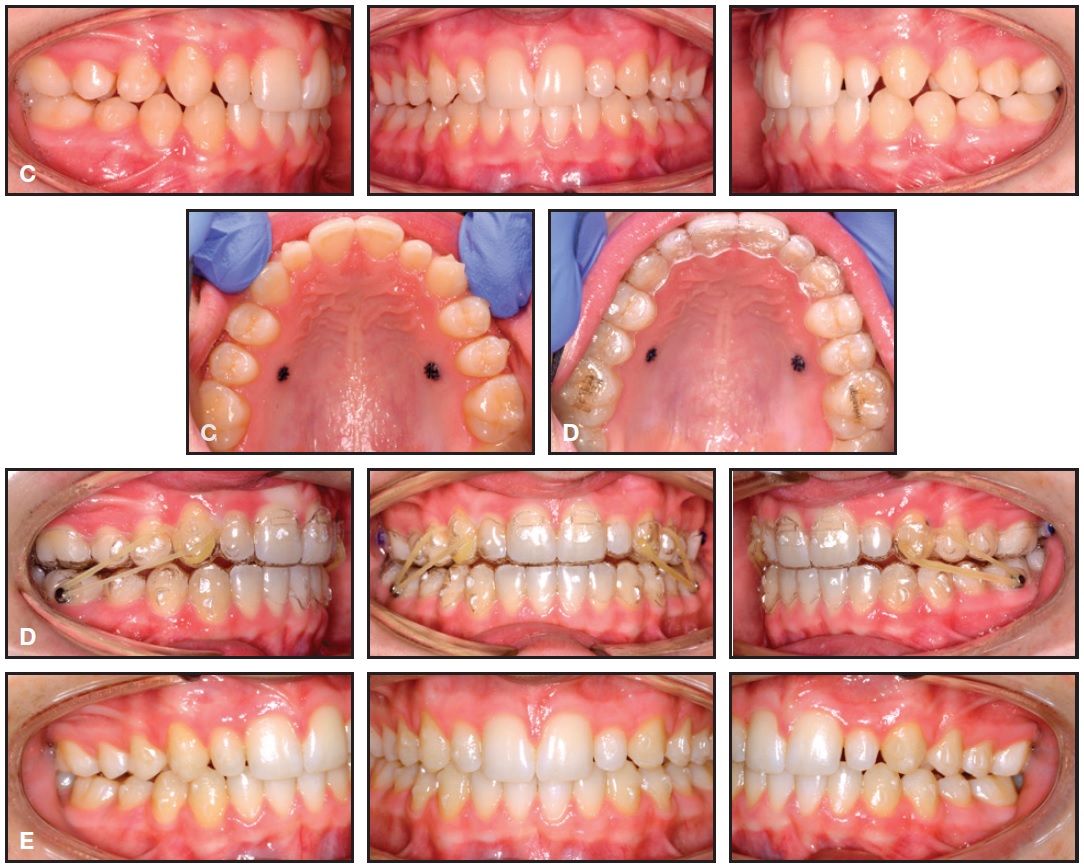 Three options are then available for subsequent clear-aligner treatment:

Another option is to correct the Class II and other less predictable aspects of the malocclusion using fixed appliances in a short phase of treatment prior to clear aligners. We conducted a combined clinical evaluation of two products--Insignia‡30 brackets and Invisalign--in an adult male patient with a unilateral Class II malocclusion and dental crowding (Fig. 7 AB, CD). 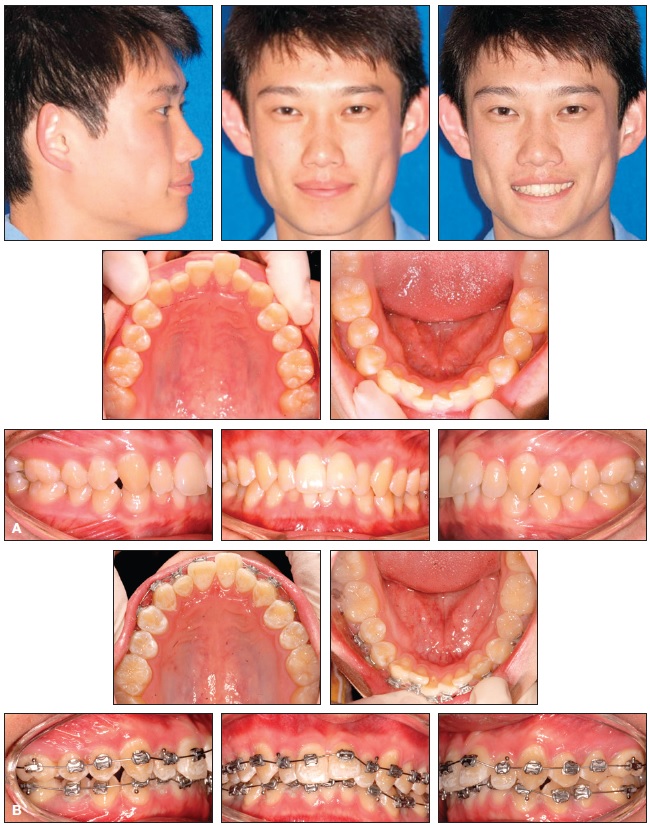 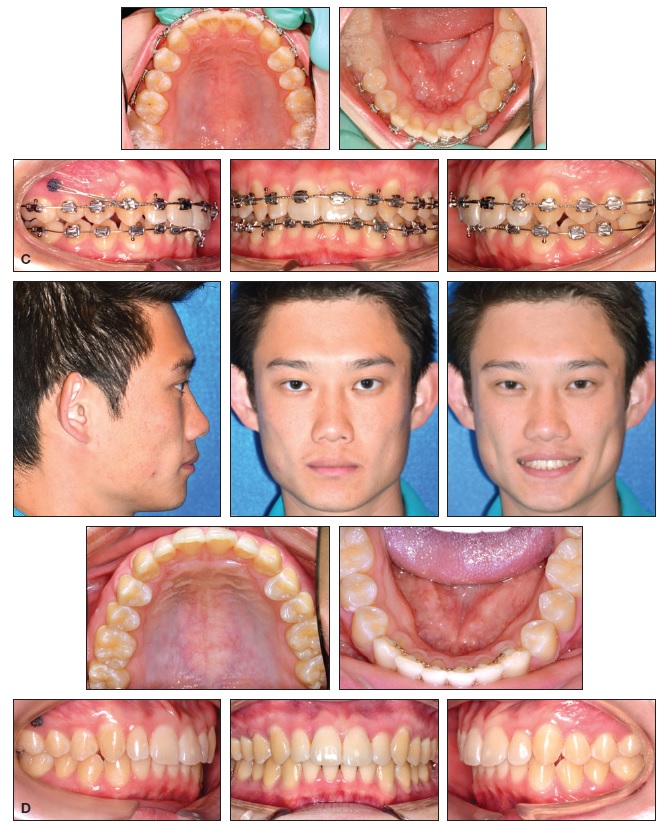 The brackets were custom-designed with built-in overcorrection to address the most difficult aspects of the patient's malocclusion over a seven-month period. Distal en masse retraction, supported by a miniscrew, improved the Class II relationship and maxillary crowding. Fixed appliances were then removed, and clearaligner treatment was initiated with Class I intramaxillary elastics worn from the miniscrew to notches cut into the upper aligner trays, thus maintaining the retraction during the remaining 17 months of treatment.

(CONTINUED IN NEXT ISSUE)

Fig. 1C C. Mild overcorrection to super-Class I achieved in 17 months, including one refinement.