(Editor's Note: The Readers' Corner is a quarterly feature of JCO in which orthodontists share their experiences and opinions about treatment and practice management. Pairs of questions are mailed periodically to JCO subscribers selected at random, and the responses are summarized in this column.)

1. What system do you use for keeping track of patients under observation, and how do you contact patients for observation appointments?

Three ways to contact patients were commonly mentioned: phone calls (79%), postcards or letters (62%), and e-mails or text messaging (60%). Only 18% of the practices used a single method; 50% used a combination of two methods, and 32% used all three.

• "We encourage the majority of our patients to make the next appointment before they leave."

• "We see our observation patient every six months and schedule the patient before they leave our office. We reach out to our 'needs appointment' list with a phone call if they need to be scheduled."

On average, nearly 60% of the patients or parents responded immediately, while about 20% never responded.

How many times do you usually attempt contact with an observation patient before giving up?

Seventy-eight percent of the respondents said they made two to four attempts, 10% tried five to seven times, and 5% would make eight or more attempts. Only 7% of the respondents kept trying to establish contact until told to stop.

How do your recall efforts differ depending on a patient's age and treatment needs?

There was a fairly even split between respondents whose efforts were no different (53%) and those who adapted their methods to the situation (47%).

Comments from the "no difference" group included:

• "We try to get all patients on recall every six months regardless of age. If we haven't seen a recall patient in several years, we attempt to contact them one last time."

• "Our efforts do not differ depending on age or treatment needs. Our recall database is the lifeblood of the practice, especially in this time of dwindling dental referrals."

Remarks from the other group included:

• "They do not differ greatly based on age. However, if I felt a treatment was urgent--e.g., functional therapy--I would ensure that I have clear evidence of multiple efforts to contact the patient."

• "We will usually make more attempts for patients who are nearing the age where treatment may be recommended. The very young recalls who do not do a Phase I are more likely to miss an annual recall appointment. If they do not schedule a recall appointment, we send a letter to their general dentist, who will usually encourage them to be seen."

• "Patients waiting for comprehensive treatment are given a higher priority than others who are on a continuing observation schedule."

How do your recall appointments differ from initial patient visits?

A minority of respondents (11%) said there was no difference between their recall appointments and initial visits. Among the rest, the most common difference was a shorter appointment time (60%), followed by a change in the method of contact for recall patients (11%).

• "Since we have already established a relationship, the appointment is usually shorter unless additional records are needed."

• "These appointments are completely different. The initial visit is an exam with photos and pano. The recall is a five-minute visit to check on growth, dental development, and readiness to start treatment."

• "Typically, these recall visits are shorter unless the patient has reached the appropriate stage of development and is ready to start treatment. Then, more time is spent explaining the types of upcoming appointments. Usually the parents have more questions at this appointment as well."

Do you charge a fee for recall appointments?

A sizable majority of respondents (89%) did not charge a fee.

How has your observation-recall system changed since the start of the economic downturn in 2008 (Fig. 1)? 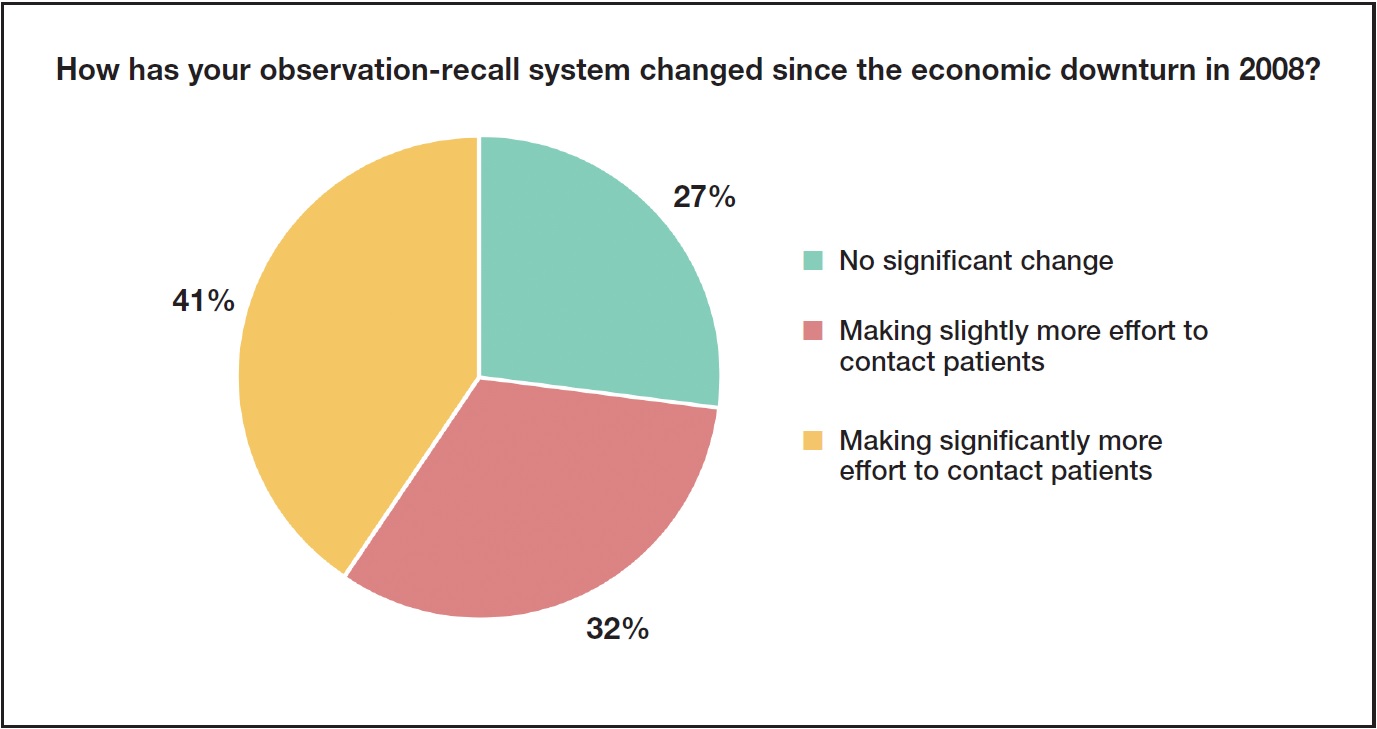 One respondent who had made no changes added this note:

• "My situation is somewhat unique. I merged my practice with a pedo practice about two years ago. At this point, a majority of patients are now 'in-house' referrals. These patients are returning to the pedodontist for their recalls, and we don't lose touch with them, so their recall rate is high. Our percentage with other referrals has remained the same."

• "It's harder to get hold of people and get them in. They think if they come in, they have to do something--which is not the case."

• "We changed office managers. Since that happened, we realized the former front-desk person was not making much of an effort to recall patients. The new manager is very aggressive and has greatly increased the number of recall patients contacted. Change can be very good."

A few other remarks on this topic:

• "The observation-recall system is probably the most vital system in the office, especially given the dying model of the DDS referral."

• "It is a must-do. We generate about 10 starts per month out of our recall system."

• "This is where the future of our practice really is, and yet we are not as efficient as we need to be in follow-up with the contacts. We need to take more of a 'sales' approach to keeping track of these contacts and follow-up."

• "From my recent experiences with certain consulting and marketing companies who relentlessly pursue you after any inquiry for information, I have become more sensitive to preventing our office from becoming a nuisance to our patients with overly aggressive follow-ups."

2. Other than journal articles, how have you kept up with changes in technology and treatment since you started practicing orthodontics?

Nearly all the respondents (97%) said they used in-person seminars and courses to keep up with technology and treatment. Twenty-five percent each also used study clubs or online continuing education (CE). Nearly half of the clinicians used all three methods.

• "Webinars are my favorite way to easily gain insight into new technology."

• "I teach part-time, which helps me to keep up via exposure at the university and in conversation with the residents and other clinical faculty."

Describe specific courses that have been the most useful to you in everyday practice.

The two primary types of courses mentioned were those offered by professional organizations such as the AAO, European Orthodontic Society, and International Association for Dental Research, along with practice-management seminars. Of the 24 specific courses listed, the most popular involved Invisalign, practice management, and skeletal anchorage. Current and past courses mentioned by more than one respondent included those presented by Drs. Robert Ricketts, Ron Roth and Robert Williams, Dwight Damon, and David Sarver, as well as interdisciplinary sessions.

• "I enjoy the smaller venue of our state and alumni meetings. That type allows more interaction with the speaker than the large ballroom courses do. Also, I like to supplement with journal CE because I can take my time and do the course when it is most convenient."

• "I value most the ones that give specifics about diagnostic and chairside methodologies."

How often do you attend conferences and CE courses that require travel?

Has your travel to conferences changed significantly since the economic downturn in 2008?

Nearly half of the respondents said they were traveling less and were more selective about which courses and conferences they attended. Comments from this group included:

• "Absolutely. The cost is a factor, and I don't take my staff any more. Too expensive."

• "I've been going to AAO courses every other year or every third year instead of every year."

• "I have tried to keep my travel more within my region of the country to cut travel expenses."

• "If I'm traveling less, it's due to my age and airport procedures."

• "I am choosier about the topic, speakers, and location. I am much more likely to attend a meeting within driving distance. I still do travel across country for meetings such as Invisalign."

• "I have always been an occasional conference attendee, and the pattern remains the same whether it's a good or bad economy."

• "I travel more. The best time to invest in anything is during a recession, and all recessions will end eventually.

If you are currently traveling less to conferences due to the economic situation, do you think you will travel more when the economy rebounds

What is your experience with mentoring?

Only 9% of the respondents had been in practice for 10 years or less. Of these, 50% reported having an orthodontic mentor--either an older, more experienced colleague or a fellow alumni association member. Besides the obvious advantage of sharing ideas and techniques, the main benefits mentioned were acceleration of the clinical learning curve, access to treatment pearls, and practice-management advice that could improve the bottom line. Half of these young orthodontists also reported belonging to formal study clubs. One comment:

• "The mentorship was offered without charge, but I paid for it, so that it would have a value. The senior orthodontist donated the fees I paid him to various charities."

The remaining 91% who had been in practice for more than 10 years were asked if they had had mentors when they started orthodontic practice; about half of this group responded in the affirmative. The mentors were described as older or more experienced colleagues (53%), senior orthodontists in their first practices (24%), or fellow study-club members (12%). Many of the mentoring relationships seem to have taken place during practice transitions.

• "I purchased a practice from an older orthodontist, and he stayed on for the first two years that I was in private practice."

• "I purchased the practice from an egomaniac. It was his way or the highway for 15 months. I will never do that to someone purchasing my practice."

• "Going into practice with my father, I had to adapt to the practices and systems already in place. I did, however, have autonomy to make my own clinical decisions. Advice was given when asked for, but never forced upon me."

Are you a mentor for any new or young orthodontists?

Two-thirds of the respondents said they were not mentoring other orthodontists, but there was a strong indication that they would be willing to do so if asked. The vast majority of mentoring arrangements were described as "informal".

Pertinent replies from those who were mentoring included:

• "I am a senior orthodontist in my area, so they all come for information."

• "I have lunch with a younger orthodontist once a week and talk shop."

• "We usually have one or two students helping us in our office. They can be from any orthodontic program in our area."

If you are a mentor, please describe what benefits or advantages you have found.

• "I always learn more when someone asks me 'why'."

• "I have learned different techniques and ideas that are currently being taught and are different from the norm when I was training."

• "It benefits the students who have many concerns about their future within the profession that are not being addressed in their curriculum, and they can learn from my experiences. I did not have that role model and have found the students somewhat starved to speak to someone they respect in a casual and friendly manner without being judged."

• "Keeps me current, makes me play by the rules, keeps me focused, keeps me ahead of the tech curve, and motivates me to be the best."

JCO would like to thank the following contributors to this month's column: