Dentofacial deformities characterized by midfacial deficiency or true mandibular prognathism are difficult to manage nonsurgically, particularly when a hyperdivergent mandibular growth pattern creates an anterior open bite. For the past 25 years, early growth modification of midfacial deficiency with expansion and facemask therapy has been the standard treatment for Class III malocclusions.1,2 A disadvantage of this approach is that it alters both the anteroposterior and vertical planes; the desired downward and forward movement of the maxilla is often accompanied by downward and backward clockwise rotation of the mandible.3-8 Although such mandibular rotation is desirable in deep-bite cases with hypodivergent growth patterns, it is inappropriate for patients with anterior open bites and hyperdivergent growth patterns.

The vertical dimension can be managed in hyperdivergent-growth patients by utilizing appliances with interocclusal acrylic, such as a bonded expander,9 bite blocks10,11 or the Tandem Appliance.12 This article describes the use of the Tandem Appliance in nonsurgical correction of skeletal Class III malocclusions with open bite.

The Tandem Appliance* (Fig. 1A) comprises three separate components, one fixed and two removable. The upper section is a fixed Hyrax, Haas, Quad Helix**, or Max-2000* expander (Fig. 1B), with buccal arms soldered for attachment of protraction elastics.

The lower section is similar to a removable retainer, with posterior occlusal coverage and buccal headgear tubes embedded in the lower first-molar regions (Fig. 1C). An .045" headgear facebow, with the outer bows bent out for elastics attachment, is inserted into the lower tubes. Posterior finger clasps are placed mesial and distal to the second deciduous molars, with C-clasps on the lower deciduous canines for mechanical retention. I recommend bonding small composite buttons to the labial surfaces of the lower canines to engage the C-clasps and thus ensure stability of the appliance during traction. In the deciduous dentition, where adequate retention may be a particular concern, a lower midline expansion screw can be added, with instructions given to the parents to activate the screw onequarter turn as needed between visits.

At the beginning of treatment, patients are instructed to wear the appliance with light, 8oz Panther*** training elastics from the outer facebow to the buccal arms of the upper expander. Subsequently, heavy orthopedic traction with 14oz Walrus*** elastics effectively delivers the protraction force to the maxilla. The posterior acrylic coverage of the lower appliance prevents maxillary extrusion during protraction, resulting in closure of the mandibular plane angle and the anterior open bite.

Patients should be encouraged to wear the Tandem Appliance as much as possible outside of school. In our practice, most children average about eight hours a day, usually while sleeping, which considerably exceeds the wear time of our typical facemask patients. Figure 2 shows the difference in esthetic appearance of a conventional facemask compared to the Tandem Appliance.

The design of the Tandem Appliance is identical for hyperdivergent and hypodivergent growth patterns. In patients with deep overbite, once the anterior teeth are out of crossbite, they begin to make initial contact, and a posterior open bite develops. After removal of the appliance, the lower molars erupt, increasing the vertical dimension and the mandibular plane angle. In contrast, when hyperdivergent growth is accompanied by an anterior open bite, the posterior acrylic inhibits posterior vertical eruption and the mandible autorotates, reducing the mandibular plane angle and closing the open bite.

Active treatment time is usually longer for open-bite cases because the entire anteroposterior correction comes from maxillary protraction. In deep-bite cases, increasing or restoring the vertical dimension also facilitates the anteroposterior correction, generally shortening treatment time. In open-bite cases, it is imperative that the posterior acrylic extend posteriorly to contact the occlusal surfaces of all posterior teeth, thus preventing any vertical growth.

A 7-year-old female presented with a Class III malocclusion, an anterior open bite, and a bilateral posterior crossbite (Fig. 3).

Clinical evaluation showed a midline discrepancy, with the mandible deviating to the right and creating a facial asymmetry in centric occlusion, due to a lateral shift caused by maxillary constriction. The patient displayed no TMD symptoms, but she had a history of ear infections and mouth-breathing. Although insufficient nasal respiration can significantly affect facial growth, contributing to maxillary deficiency and vertically excessive growth,13 her pediatrician did not recommend removal of either tonsils or adenoids.

Because of the skeletal nature of the malocclusion and the midline deviation, and because good cooperation was anticipated, a nonsurgical orthodontic treatment plan was recommended. A removable expander and a Tandem Appliance with posterior acrylic coverage were designed to control the vertical dimension.

The expander was activated by the parent once a week until the maxillary posterior teeth were out of crossbite and the mandibular midline deviation was corrected. After five months of treatment, active expansion was discontinued; the patient continued to wear the passive expander full-time for three months, then at night only for another three months.

Three months later, a Quad Helix** expansion appliance with soldered buccal arms was cemented to the upper first molars, in conjunction with a removable lower Tandem component with posterior bite blocks for vertical control. The Tandem Appliance was worn at night with 400g of elastic traction on each side until the maxillary and mandibular incisors had fully erupted into a normal overbite and overjet. The Quad Helix was removed and reactivated five months into treatment.

Another six months later, with no sign of relapse, all appliances were removed (Fig. 5). 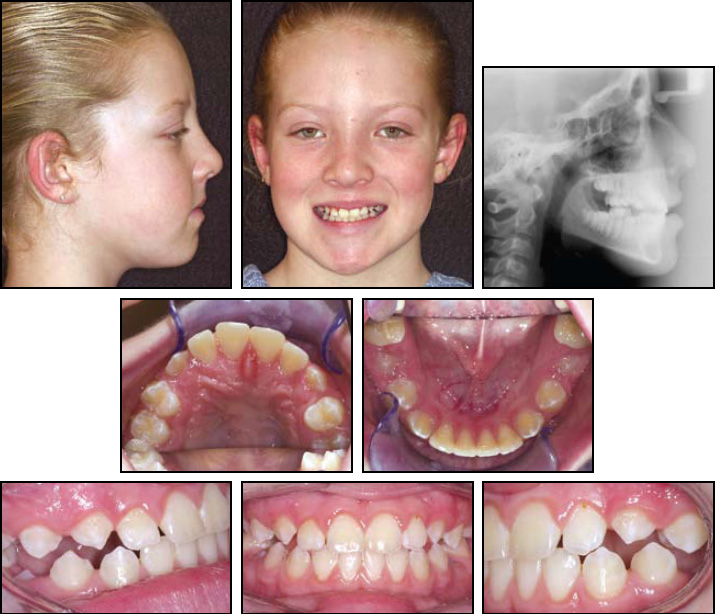 Upper and lower Hawley retainers were delivered to maintain the alignment. Despite repeated requests, the patient did not return to the office for another four years, when she was 17. Records taken at this time showed that her occlusion had remained stable (Fig. 7).

Fig. 7 Patient six years after treatment with Tandem Appliance only (no fixed appliances were used).

The Tandem Appliance corrected the Class III open-bite malocclusion in the transverse, vertical, and sagittal dimensions. Cephalometric analysis (Fig. 8) indicated maxillary protraction, with a net increase of 3mm from A point to Na perpendicular (Table 1). The mandible continued to outgrow the maxilla as the patient matured. Sagittal changes reflected by the Wits appraisal were balanced by a counterclockwise rotation of the occlusal plane. The vertical direction of growth, as demonstrated by Sn-GoGn, was reduced by 4º, resulting in closure of the anterior open bite. The occlusal plane angle was also significantly decreased.

These vertical changes remained stable throughout the patient¢s growth after treatment. Some dental compensation was seen during Tandem treatment, with a 3mm forward movement of the maxillary anterior teeth and 1mm lingual tipping of the mandibular incisors. (Initial records were taken with the deciduous anterior teeth, which may have increased the possibility of measurement error.) 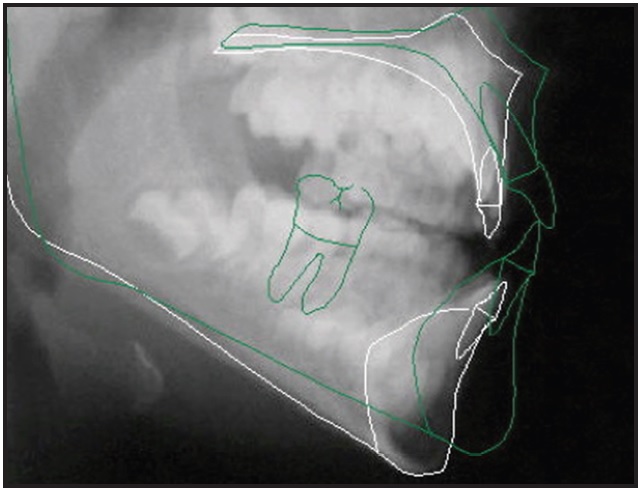 Patients with Class III skeletal patterns generally continue to grow in that direction after active treatment.14 Because the relative growth velocity of the maxilla compared to the mandible remains constant, overcorrection is required to ensure long-term stability.

The traditional facemask has the advantage of generating maxillary protraction with pure extraoral anchorage,2,15 creating a downward and forward vector of force against the maxilla with minimal compensatory dentoalveolar changes.5,6,8

In contrast, the Tandem Appliance provides a toothborne anchorage system that combines skeletal and dentoalveolar movement.12 Nevertheless, the increased level of patient cooperation with the Tandem Appliance, combined with the ability to control the vertical dimension, protract the maxilla, and benefit from the Class III elastic dentoalveolar effect, makes this appliance extremely valuable in nonsurgical Class III treatment. Further study of Class III treatment modalities, including bone anchors,16 is recommended.

Dr. Klempner is a faculty member, School of Dentistry, State University of New York at Stony Brook, and Department of Orthodontics, Tufts University, Boston. He is in the private practice of orthodontics at 656 Main St., Port Jefferson, NY 11777, and is the inventor of the Tandem Appliance, but has no financial interest in the product. E-mail him at drk@coolsmiles.com.

Fig. 7 Patient six years after treatment with Tandem Appliance only (no fixed appliances were used).