Body piercings involving the oral cavity are becoming more and more common. In one study of college students seen at the Mayo Clinic, 10 of 218 males (4%) and 37 of 228 females (16%) had tongue piercings.1 About half of these students had allowed their tongue piercings to close over time. The study also found that 17% of all body piercings were associated with complications ranging from insignificant to life-threatening. Another study of oral piercings, conducted among high-school students in Buffalo, New York, reported that 75% of the students played with their piercings.2

Our clinic treated a woman with a pierced tongue who habitually placed the metallic, barbellshaped piercing stud between the maxillary central incisors, resulting in a midline diastema between teeth that had previously been well aligned orthodontically.

A 26-year-old female presented with the complaint of a large space between her upper central incisors. She reported that since having her tongue pierced seven years previously, she had habitually been pushing the barbell-shaped stud between her maxillary central incisors. This habit had eventually created a midline diastema where no space had existed prior to the tongue piercing (Fig. 1). 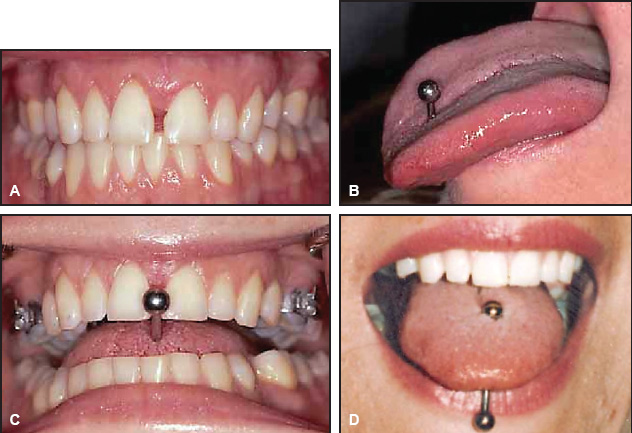 The treatment plan required removal of the tongue stud before placement of a full bonded appliance. Sixteen weeks of periodontal treatment were completed before preadjusted .018" edgewise brackets were placed (Clarity* ceramic in the anterior segments, metal in the posterior). Following initial leveling and alignment, the diastema was closed using medium elastic power chain on .016" round stainless steel archwires (Fig. 2). Orthodontic treatment progressed as anticipated, although the patient missed many appointments and was out of contact for two periods of six months, extending treatment time considerably. The resulting final occlusion was retained with removable appliances.

Oral piercings can affect both oral and orthodontic health.3-7 Body piercings carry considerable risk of initial local and systemic infections and of later cross-infection with pathogens such as hepatitis B and C, HIV, and herpes simplex viruses.8-11 Body piercings are often performed without, or with poorly controlled use of, local anesthetic techniques, which can sensitize patients to the anesthetics commonly used in dentistry.

Tongue piercing has also been associated with bleeding, pain, swelling, chipped or fractured teeth, mucosal or gingival trauma,12 eating problems, some degree of speech impediment,13 and, in at least one case, loss of a sewing needle during the procedure.14 Tongue piercings have been known to cause bifid tongue4 and multiple brain abscesses.15 The metal ornament can become imbedded under the ventral mucosa of the tongue16 and has also been implicated in recession of the lingual gingiva.17

In the patient shown here, habitual pushing of the tongue stud caused a maxillary midline diastema. Treatment was uneventful after the ornament was removed. The patient was satisfied with the treatment result, and she made a commitment to educate teenagers about the potential hazards of tongue piercing. With oral piercings becoming more common, dental professionals should do more to make the public aware of the risks involved.