Treatment of Class II malocclusion in adolescents has always relied on growth modification. The majority of treatment modalities, such as functional appliances, are directed at stopping or redirecting maxillary growth and simultaneously stimulating mandibular growth.1-3 On the other hand, in adult patients with severe Class II malocclusions, generally involving extremely deficient mandibles, orthognathic surgery is often the only possible treatment.

Although camouflage may be attempted by extracting premolars, the soft-tissue objectives may be impossible to meet. Even so, a recent study has shown that patient satisfaction with camouflage treatment was similar to that achieved with surgical mandibular advancement.4 In Class II patients with mild-to-moderate skeletal discrepancies, dental compensation may well be the treatment of choice. Common treatment procedures for such patients include flaring of incisors, interproximal tooth reduction, and extractions.

Treatment of an adult Class II patient requires careful diagnosis and a treatment plan involving esthetic, occlusal, and functional considerations.5-7 The treatment objectives must include the chief complaint of the patient, and the mechanics plan should be individualized based on the specific treatment goals.

At the University of Connecticut, we have designed multifunctional orthodontic wires capable of simultaneously performing different orthodontic tooth movements. Because both the force system and the side effects of these "smart" wires are now well understood, we can usually avoid the need for headgear and Class II elastics.

This article describes our treatment of Class II, division 2 adult patients requiring premolar extractions. Division 2 cases are often characterized by severe deep bites, lingually inclined upper central and lower incisors, and labially flared maxillary lateral incisors. These patients also tend to exhibit problems with the upper and lower occlusal planes, such as deep curves of Spee. The soft-tissue drape of the lips often conforms to the malocclusion, so that the lips may be redundant with a deep mentolabial sulcus. Because of the deep bite and supraeruption of the maxillary incisors, the gingival margins of the maxillary anterior teeth are usually malaligned, and the lingually inclined mandibular incisors may have excessively high gingival margins (Fig. 1).

The treatment protocol for these patients includes extraction of upper premolars to relieve crowding, with simultaneous correction of the deep bite by intrusion of the upper and/or lower incisors. Intrusion mechanics are performed with either a preformed nickel titanium Connecticut Intrusion Arch8 (CIA) or CNA beta titanium archwires. Space closure is accomplished with CNA mushroom-loop wires or CNA T-loops.

The length of the wire is determined by the location of the moment bent into it. For ideal force activation, the bend should be 3-5mm mesial to the first molar auxiliary tube when the wire is inserted (Fig. 2). To produce higher force levels of 50-60g, which might be desirable in some adult patients, preformed CNA beta titanium archwires can be activated by placing moment bends in front of the molar tubes. The bends can be increased or decreased to vary the magnitude of force.

A stainless steel base archwire is used to slide the canines distally. To prevent the incisor bite from deepening due to the change in inclination of the canines (Fig. 4), an intrusion arch can be tied over the stainless steel wire (Fig. 5).The intrusion arch is ligated at the level of the lateral incisors and between the central incisors, delivering a distal crown tipback moment on the molars to effectively control the loss of distal anchorage often associated with sliding mechanics (Fig. 6). These mechanics are ideal for cases where anchorage is critical and, in adults, can eliminate the need for headgear or Class II elastics. With an intrusive force on the incisors and a moment on the molars, the base archwire will not deflect too much, as is often seen in sliding mechanics due to the friction generated by canine retraction.

At this stage, in the majority of patients, the four incisors either need translation or controlled differential movement of their crowns and root apices. For translatory movement, a high, constant moment-to-force ratio of approximately 10:1 is recommended.9 If the ratio is too low, as is common with straightwire mechanics, the incisor crowns will move lingually, reducing the overjet and giving an erroneous impression of a tooth-size discrepancy when the spaces distal to the lateral incisors appear to be enormous. To correct this side effect, either the bite must be reopened or the incisors must be torqued, creating an unnecessary stress at the root apices as well as lengthening the treatment time.

The preformed mushroom-loop space-closing archwire produces an ideal moment-to-force ratio. The mushroom shape of the loop will not interfere with the gingival tissue, and an activated loop will not become distorted, thus improving force delivery. For .022" brackets, an .017" × .025" CNA archwire comes preformed with the mushroom loops at standardized distances of 26-46mm in increments of 2mm (Fig. 7A). This measurement represents the distance between the distal surfaces of the lateral incisors across the midline.

Once the proper archwire has been selected, it is preactivated outside the mouth to achieve the proper moment-to-force ratio. First, the legs of both mushroom loops are carefully separated by about 3mm. Additional gable bends may be placed mesially as needed to increase the anterior moment (torque), and distal to the mushroom loop to increase the anchorage moment (Fig. 7B). Next, the torque on the distal legs is eliminated. The archwire is then placed in the mouth and engaged across the arch from first molar to first molar (Fig. 8). Another 1mm of activation is added, for a total of 4mm.

The loop should not be reactivated until at least 3mm of space has been closed, thus maintaining a more constant moment-to-force ratio. After the spaces are completely closed, the wire should be left in the mouth for one or two additional visits, so that the residual moments can be used to correct the axial root inclinations of the anterior and posterior teeth (Fig. 9A). This completely eliminates the need for root uprighting and torquing springs and significantly shortens treatment time.

The finishing phase of treatment simply involves the use of coordinated .017" × .025" or .018" × .025" CNA wires. Minor bends can be placed in these beta titanium wires for detailing the alignment and occlusion. The finishing stage is usually short because of the correct positioning of the incisors after retraction (Fig. 9B).

In adult patients, a maxillary modified Hawley wraparound retainer is ideal, because there is no interference in the occlusion. A lower bonded 3-3 retainer is recommended. It is important to emphasize that intrusion is a stable movement10; minor overbite relapse should be expected, however, since its correction does involve some posterior buccal extrusion.

A 26-year-old female presented with the chief complaint of "my teeth stick out" (Fig. 10A). She had a moderately convex hard- and soft-tissue profile because of a retrusive mandible. A Class II, division 2 malocclusion was associated with a severe overjet and 100% deep bite due to moderately supraerupted upper incisors and excessively supraerupted lower incisors. The upper incisors were upright, and the lower incisors normally inclined. Both arches exhibited mild-to-moderate crowding.

The treatment objective in this case was to maintain the hard- and soft-tissue profiles. In the vertical dimension, the goal was to intrude the maxillary incisors to improve the lip-to-incisor relationship and achieve a flat occlusal plane. The lower incisors needed to be intruded slightly, but extrusion of the posterior buccal segments was undesirable. In the anteroposterior dimension, the treatment objectives were to maintain the upper incisor crown positions and move the roots lingually. The lower incisors required minor intrusion as well as flaring. The molar positions, arch width, and midlines needed to be maintained.

The upper first premolars were extracted to relieve crowding. An .017" × .025" nickel titanium intrusion arch was placed to simultaneously flare and intrude the upper incisors. Group A anchorage11 (critical) was maintained with the intrusion arch during cuspid retraction, using sliding mechanics on an .016" × .022" stainless steel archwire (Fig. 10B,C). The mushroom loops in an .017" × .025" CNA archwire were preactivated as described above (Fig. 10D). Posterior moments in the mushroom-loop archwires helped maintain anchorage during upper incisor retraction.

Treatment of Class II, division 2 malocclusion in adults is always challenging. Applying sound biomechanical principles to execute the mechanics plan is the surest way to achieve predictable results with minimal side effects. The appliance shown in this article is versatile enough to be applied in a variety of situations with only minor alterations. By using the biomechanical concepts presented here and a set of archwires designed with specific objectives in mind, the clinician can achieve the desired goals. 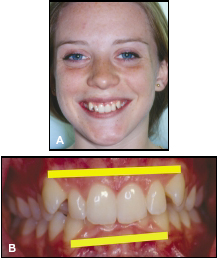 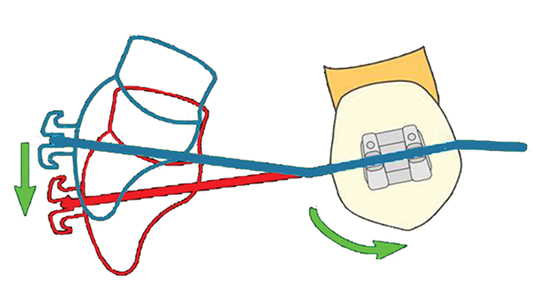 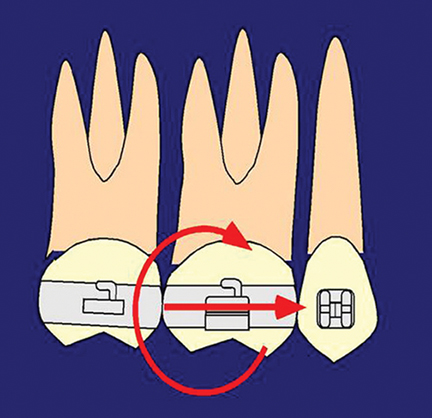 Fig. 9 A. Mushroom-loop archwire with spaces closed. Wire is left in place for another six weeks to allow residual moments to deliver proper axial root inclinations. B. Same patient with ideal axial inclinations. 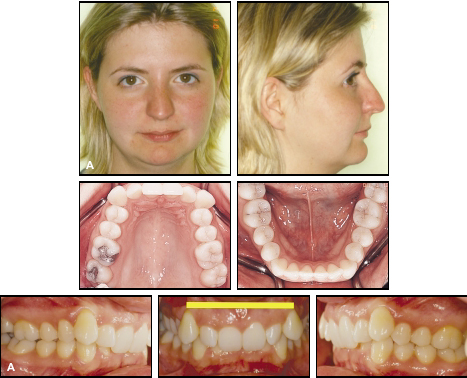 Fig. 10D .017" × .025" mushroom-loop archwire with preactivation bends activated about 4mm for translatory incisor retraction. Archwire was not reactivated for about 10 weeks.

Dr. Uribe is an Assistant Professor, Department of Orthodontics, School of Dental Medicine,