Room at the Top

At the bottom of any profession is that small number of practitioners who are perceived by their peers to have failed to deliver acceptable standards of care. Their failure is rarely called to the attention of or recognized by the general public. In the middle is the majority of the profession who are content to be within that broad range described as "average". Since professional education is uniformly at a high level these days and graduates are reasonably conscientious, average standards of care can be quite high, and the public is generally satisfied with its treatment. At the top is a significant number of practitioners who are recognized by both their peers and their public to be operating at a higher level and to be delivering a superior quality of care.

A superior quality of care is superior in all the features that make up a practice, but how do you become superior? That lies in the motivation of the practitioner. If serving people is his or her prime motivation, superiority can most easily flow from that. If having the biggest practice and earning the most money is the prime motivation, superiority can flow from that, too. Numbers of patients and dollars are easier to measure than quality of treatment and quality of personal relationships, and it is too easy to equate economic superiority with professional superiority. The fulfilled and truly superior professional has both. It is difficult to conceive of a practice that is superior in the professional, administrative, and behavioral aspects and not superior in economic rewards.

Competition has always been a factor in professional practice because of the isolation of solo practice. Recently, however, competition in orthodontic practice has been heightened. Even with reduced numbers of orthodontic graduates, at the present rate the number of orthodontists might reach 10,000 in the next 10 years. There is a recession in general dentistry because the supply of dentists far exceeds the demand, and the flow of dental graduates continues at a high level. As a consequence, increasing numbers of general dentists are turning to orthodontic treatment to supplement their income. A corollary to this is the increasing percentage of pedodontic practices that are devoted to orthodontics. Changes in the law have encouraged professional advertising, which has spawned a corporate dentistry industry and a spate of "innovations" such as referral services, preferred providers, and various closed panel arrangements.

These are increasingly difficult times, and the economic pressure particularly will tend to depress the level of average achievement. However, it will not increase the requirements for being at the top. They are always the same. "To be Number One," Vince Lombardi said, "you've got to pay the price". The price is dedication to excellence.

Perhaps the beginning of the road to excellence is to decide and to commit to paper what your philosophy of practice is. This is a highly personal exercise, and there is no point in deluding oneself about it. Your philosophy may change with time, and probably will. But once a practice philosophy involves a concept of excellence that is really part of the individual's value system, the price has been agreed upon, and the expenditure of time, energy, and money will have been committed. Just how excellence will be achieved then involves a second, possibly more difficult exercise--to commit to paper a written set of practice objectives; and a third, even more complicated exercise--to commit to paper a clear, detailed plan for achieving those objectives. It is never too late to embark on this road.

In setting objectives, how does one decide what excellence is? Barney Jankelson says, "If you can measure it, it is a fact. If you can't measure it, it is an opinion". Certain aspects of practice excellence can be factual. Income, case starts, referrals, overhead rate, and rate of practice growth are measurable. Efficiency of scheduling and staff productivity are measurable. Quality of treatment and human relations are more difficult to measure and tend to fall into the category of opinion. Some inferences can be drawn about human relations from growing numbers of referrals, acceptance rate, staff turnover, on-time completion of cases, patient satisfaction surveys, and number of complaints. A checklist of actions that contribute to excellent human relations might be helpful.

The quality of treatment is also measurable to some extent. One grading system has been published (Grading Your Orthodontic Treatment Results, JCO March 1975), and evaluation of post-treatment records can be a measure of the quality of treatment results. Appearance and soft-tissue evaluation are more subjective, and we rely too much on profiles in the absence of a good way to evaluate other aspects. Each practitioner can set standards of excellence in his own practice that are the highest he can think of, and then try as objectively as he can to assess whether he achieves those standards.

Orthodontics is correctly perceived by the public as a high-quality service. As with almost any human activity, but especially in high quality services, the most satisfying and rewarding position is at the top; and there is room at the top in orthodontics. While there are adequate satisfactions and rewards in the middle, there is some urgency about the pursuit of excellence. The middle can be eroded by increased competition and by increasing costs and recurring high inflation, which are neutralized to a large extent at the top. But to be at the top--to be Number One--you have got to pay the price. 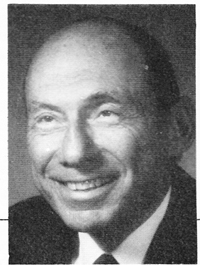