Maxillary Protraction with Miniplate Anchorage in a Patient with Binder Syndrome

Binder syndrome, also known as maxillonasal dysplasia, is a rare congenital deformity with a prevalence of less than one in 10,000. It was first described in 1939 by Noyes,1 but Binder defined it as a syndrome in 1962.2 The etiology and pathogenesis of the syndrome are still unclear. Traumatic or infectious factors, family history, and defects in neural crest cells have been proposed as causes.3,4

Binder syndrome is characterized by the absence of frontal sinuses, a nasal spine, and the crest that divides the floor of the nasal cavity from the anterior region of the maxilla; abnormally positioned nasal bones; atrophied nasal mucosa; maxillary hypoplasia; and a Class III malocclusion.5,6 Although malformations of the cervical vertebrae have been reported in addition to these facial abnormalities, the incidence or severity of such malformations does not appear to be related to the degree of maxillonasal dysplasia.4

A patient with Binder syndrome exhibits hypoplasia of the middle facial third, a flat nose, a convex upper lip with a short philtrum, half-moon-shaped nostrils due to a short columella, and an acute nasolabial angle.3 Dentally, the patient usually presents with protrusive upper incisors, anterior open bite, and crowding, and sometimes with missing incisors or molars.7

Treatment of this anomaly is controversial, but generally depends on the complexity of the case. Less severe cases can be treated with orthodontic camouflage, while others require multidisciplinary intervention.3 This report shows a patient with mild Binder syndrome who was treated with Class III elastics anchored by four miniplates.

An 8-year-old male was referred by the pediatric dentistry clinic to the orthodontic clinic of the State University of Rio de Janeiro for correction of a Class III malocclusion. Clinical examination showed a symmetrical face, a low smile line, a deficient middle facial third, and a convex profile (Fig. 1A). 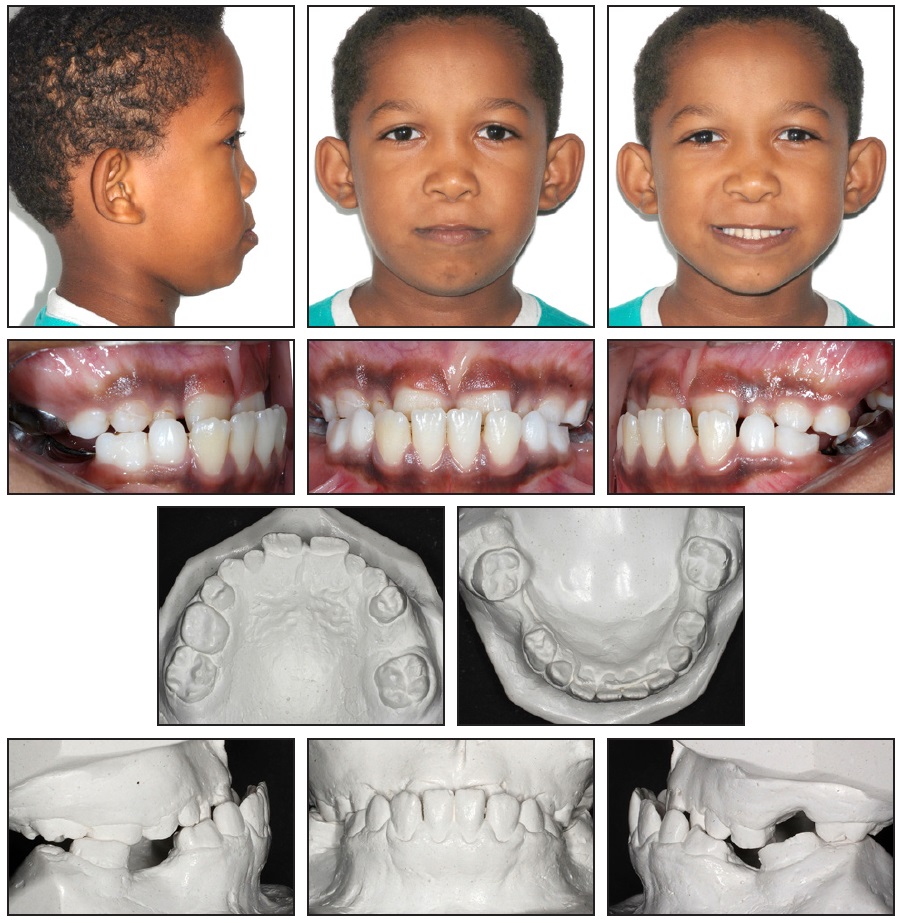 The patient was in the mixed dentition, with early exfoliation of the lower second deciduous molars. A stainless steel crown had been placed on the upper right second deciduous molar, and a lingual arch had been bonded to maintain space in the mandibular arch. The facial midline was coincident with the mesial aspect of the upper right permanent central incisor. The patient had a complete crossbite with a 5mm negative overjet, an overbite covering more than two-thirds of the upper incisors, and a Class III molar relationship.

The panoramic radiograph revealed the presence of all permanent teeth, but a lack of space for eruption of the lower left second premolar. Among the permanent teeth, only the upper and lower first molars, upper central incisors, and lower central and lateral incisors had erupted; the deciduous predecessors still had long roots (Fig. 1B). 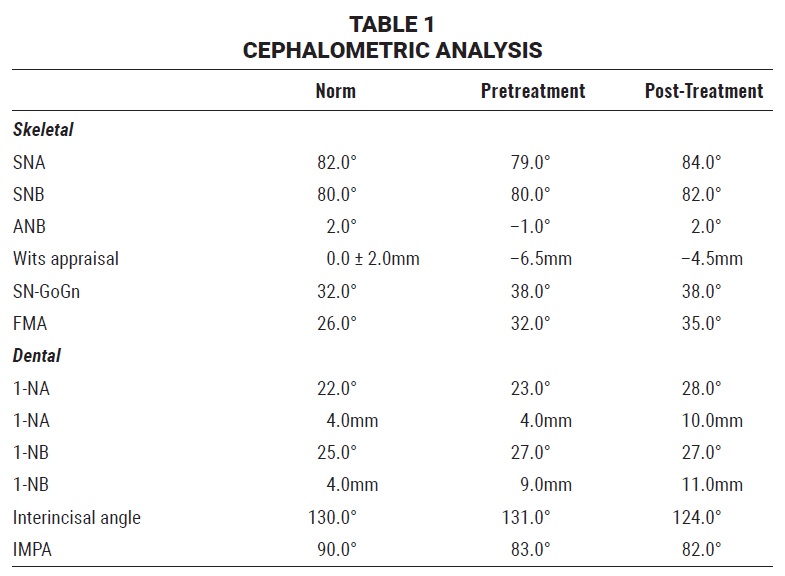 Treatment objectives included space opening for eruption of the permanent teeth, correction of the Class III malocclusion, establishment of ideal overjet and overbite, and improvement of the facial profile.

We determined that the patient’s skeletal age was too advanced for the use of a McNamara-type expander in conjunction with a Petit facemask. Moreover, there was no transverse discrepancy between the arches, as demonstrated by manipulation of the dental casts for correction of the anterior crossbite and Class III relationship. The parents declined the option of delaying orthognathic surgery until the end of growth, because they wanted the occlusion resolved to restore function and improve facial esthetics.

Therefore, we agreed to proceed with orthodontic camouflage treatment, using Class III elastics with anchorage from four miniplates. The patient and his parents were informed about the need for a surgical procedure and the importance of wearing the elastics throughout treatment. Because of the potential for further mandibular growth, we decided to begin treatment without extractions.

A surgical guide for installation of the miniplates was fabricated from orthodontic wires and an acrylic plate. The procedure was performed
in a surgical center under general anesthesia. Four miniplates* were installed: two C-tube types in the upper arch and two L-types in the lower arch (due to the erupting permanent canines). Intermaxillary elastics** with a force of 500g per side were then attached between the plates (Fig. 2).

Fig. 2 After surgical procedure, intermaxillary elastics** with 500g of force per side attached between miniplates.

The patient was instructed to wear the elastics 18-20 hours per day, removing them only during meals and changing them once per day. A removable device with posterior occlusal stops was fabricated to resolve the overbite and distalize the lower left first molar (Fig. 3). 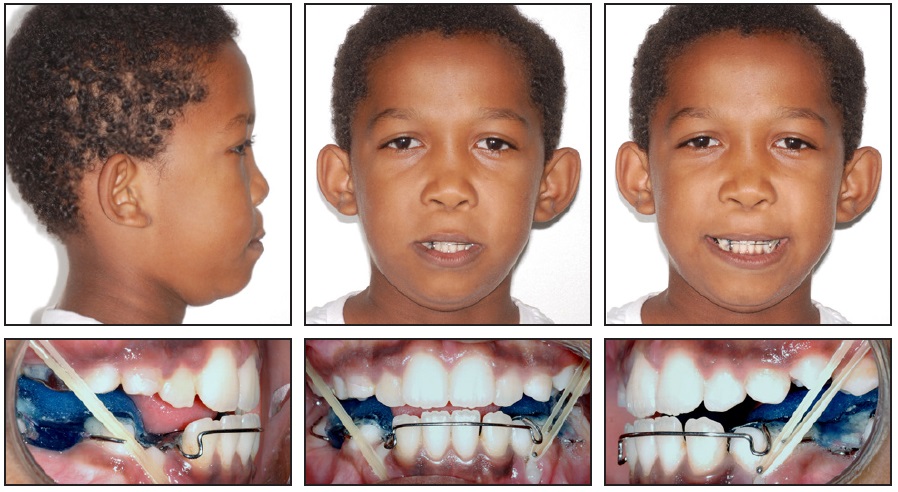 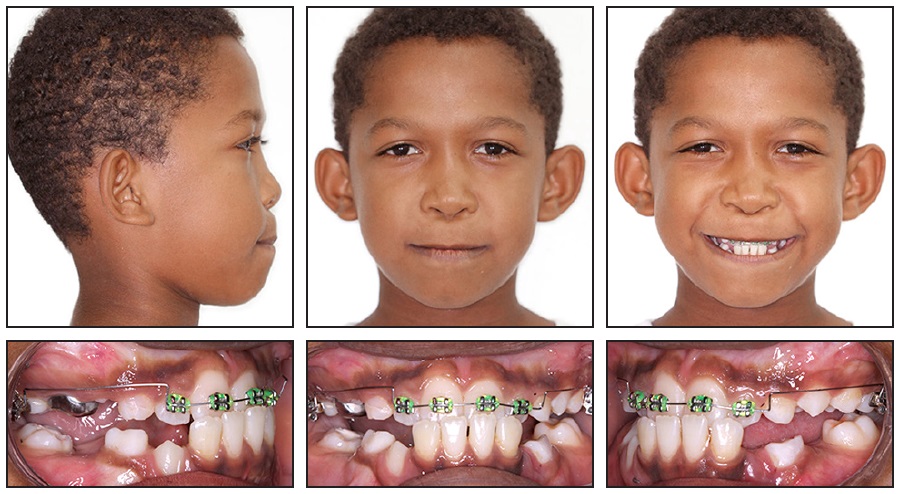 A positive overjet was observed 10 months later. Both arches were then fully bonded for leveling and alignment (Fig. 5). The patient was instructed to continue wearing the elastics between the miniplates. 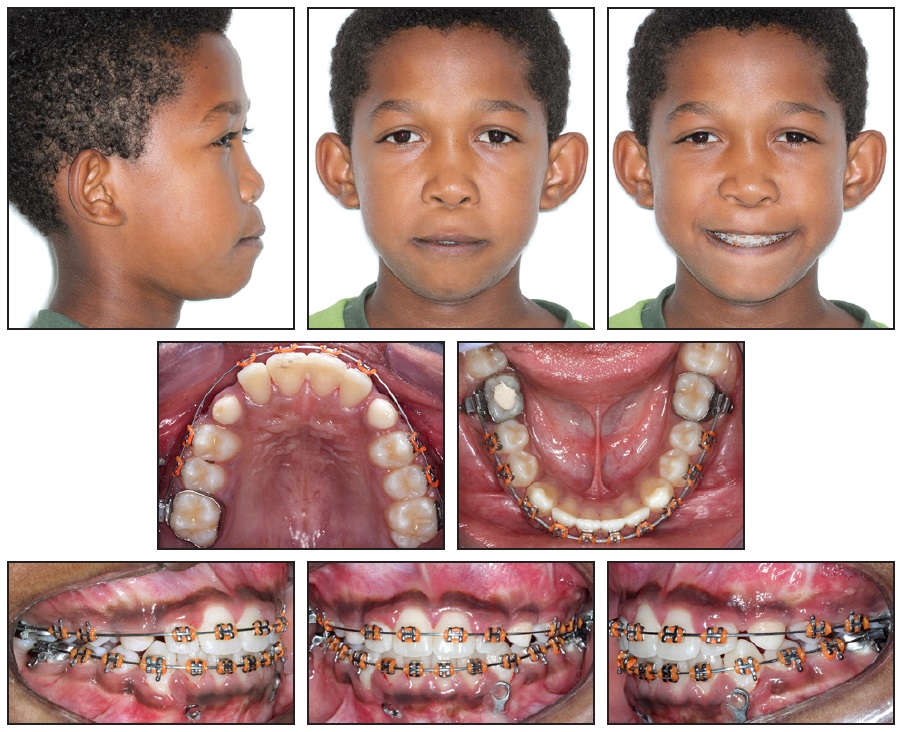 Fig. 5 After 22 months of treatment, both arches fully bonded for leveling and alignment.

Following 20 months of elastic wear, the lower left miniplate was replaced because of gingival inflammation.

After two years of treatment, a cephalogram indicated that the patient was at the peak growth stage (CS4). The upper right miniplate showed signs of causing inflammation, but because of the amount of bone covering the miniplate, we decided to keep the intraosseous portion in place and insert a new miniplate nearby. The finishing stage began with intercuspation elastics worn to .018" stainless steel archwires, followed by .020" and .019" × .025" (Fig. 6). 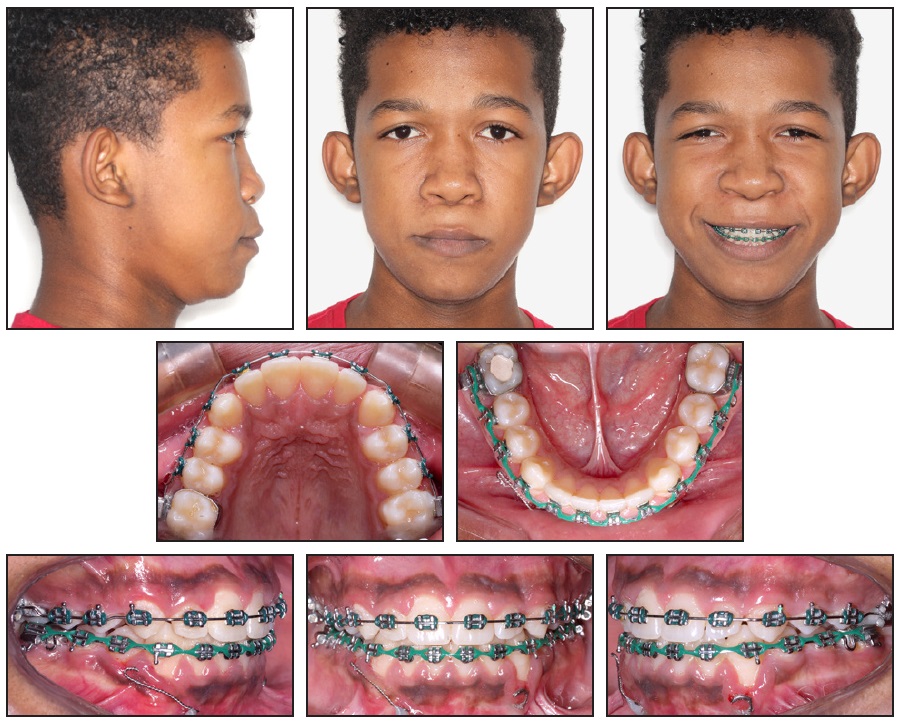 After 41 months of full appliance wear, the brackets were removed. The patient was instructed to wear intermaxillary elastics from buttons cut into the thermoplastic removable retainers, and a 3-3 lingual retainer was bonded in the lower arch (Fig. 7). The miniplates were left in place until the end of the patient’s growth period.

Total treatment time was seven and one-half years (Fig. 8A). 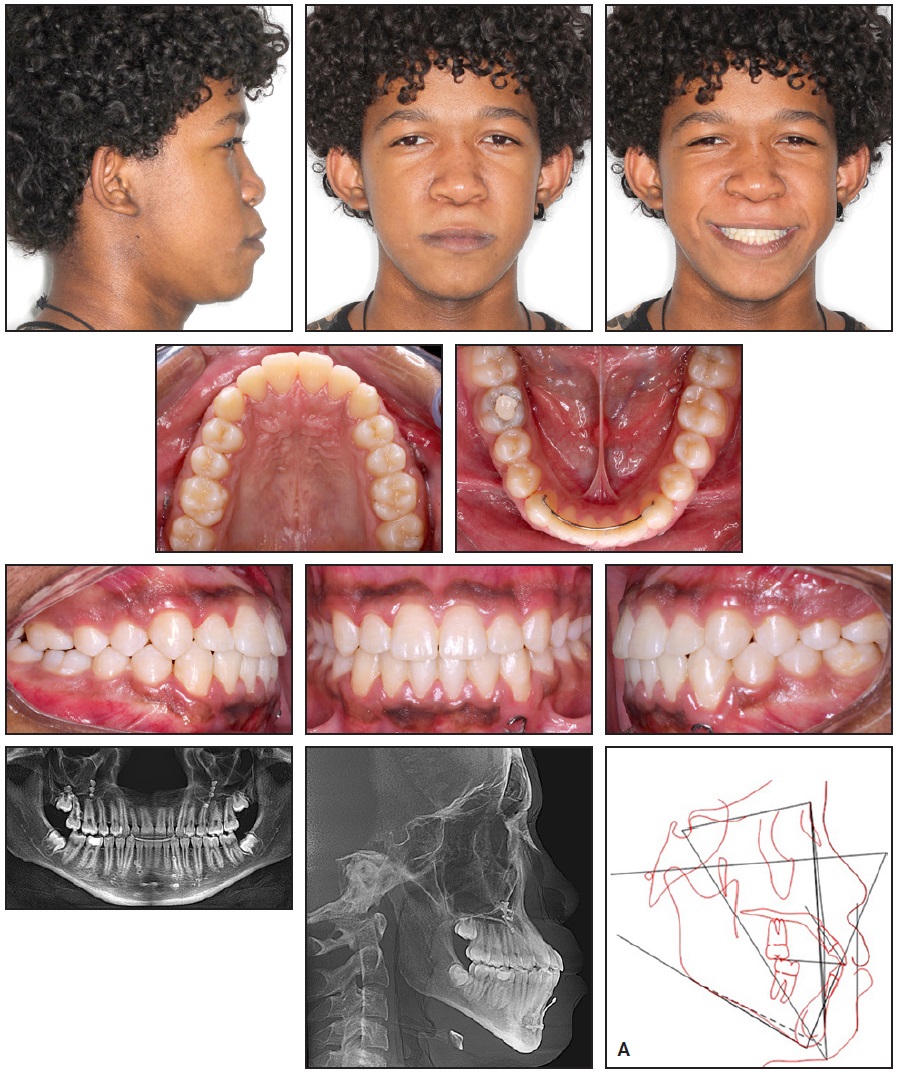 Fig. 8 A. Patient after seven and one-half years of treatment (continued in next image).

Dental alignment was satisfactory from both a functional and esthetic point of view. A harmonious smile was obtained with increased exposure of the upper incisors, and the patient was pleased with the result. He finished with a Class I occlusion, ideal overjet and overbite, and coincident midlines. A small augmentation of the middle facial third was achieved without surgical intervention, but the facial profile remained convex.

The panoramic radiograph showed root parallelism with no noticeable root resorption. The third molars would be monitored until their eruption (Fig. 8B). 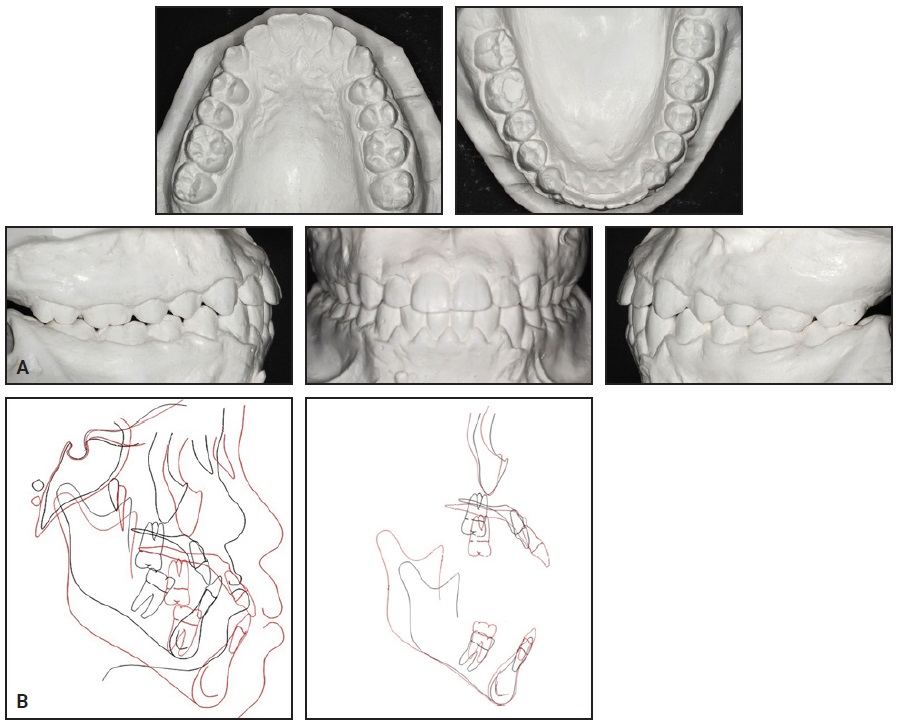 Fig. 8 (cont.) A. Patient after seven and one-half years of treatment. B. Superimposition of pretreatment (black) and post-treatment (red) cephalometric tracings.

Depending on the degree of midfacial deficiency and the occlusal relationship, treatment of Binder syndrome can range from orthodontic camouflage to orthognathic or plastic surgery.3 Cossellu and colleagues published a case in which a patient with Binder syndrome was treated with maxillary expansion, a Delaire facemask, and nasal plastic surgery, showing excellent functional and esthetic results.8,9 A more severe case may require Le Fort I and/or Le Fort II osteotomy.10,11 Another surgical option involves the installation
of prostheses or grafts to correct the paranasal and
infraorbital deformities.5,12

Since its introduction in 2009, skeletally anchored maxillary protraction has become a viable option for Class III treatment.13 In the case shown here, Class III elastics were attached to four miniplates to avoid dentoalveolar side effects and facilitate patient compliance.14 The patient’s facial profile improved as the paranasal concavity was reduced; in the absence of premolar extractions, however, the profile remained convex with an acute nasolabial angle—characteristics typical of Binder
syndrome.3

It is important to emphasize that this case was completed during adolescence, improving the patient’s self-esteem and quality of life. Early diagnosis and a multidisciplinary approach are crucial in such situations.15,16 If necessary, there is still the possibility of performing a surgical procedure in the future.17 Disadvantages of this technique include the need for surgical insertion and removal of the miniplates,13 as well as the risk of inflammation or loss of tissues surrounding the plates.18 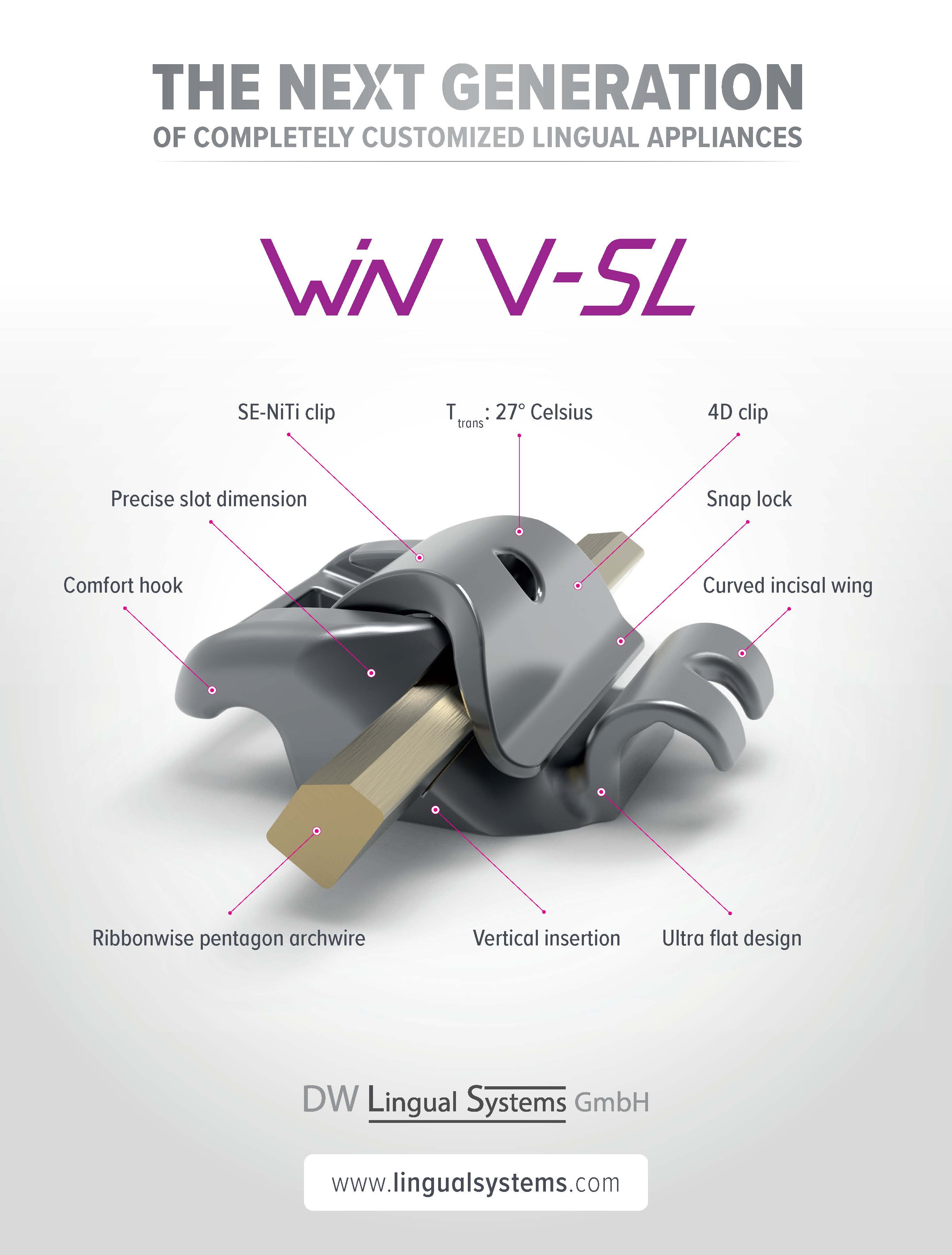 Fig. 2 After surgical procedure, intermaxillary elastics** with 500g of force per side attached between miniplates.

Fig. 5 After 22 months of treatment, both arches fully bonded for leveling and alignment.

Fig. 8A A. Patient after seven and one-half years of treatment (continued in next image).

Fig. 8B (cont.) A. Patient after seven and one-half years of treatment. B. Superimposition of pretreatment (black) and post-treatment (red) cephalometric tracings. 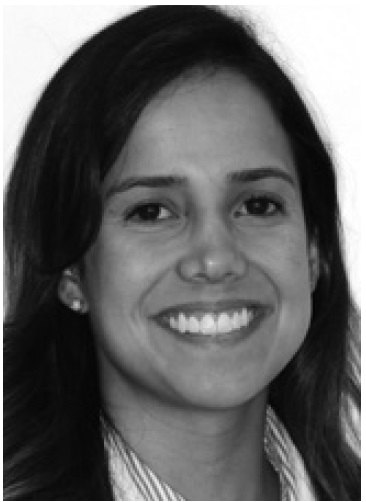 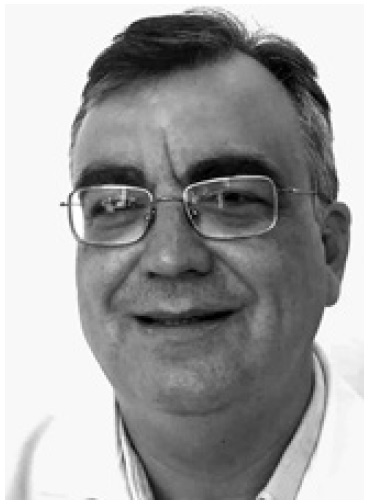 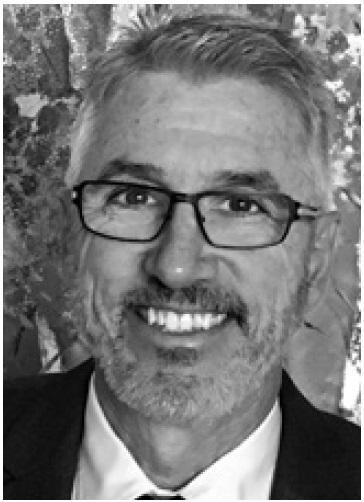