Although extraction of permanent canines is an unconventional treatment option, the orthodontist may encounter situations in which it is indicated because of severe malpositioning, ankylosis, impaction, or congenital defects.

The aim of this article is to show that satisfactory occlusion and esthetics can be achieved with this modality, often in a shorter treatment time.

Much attention has traditionally been paid to canine rise in lateral excursive movements.1-3 Thornton found, however, that there is no scientific evidence for the superiority of one occlusal scheme over another from a functional standpoint.4 The requirement to establish a canine-protected occlusion in orthodontic patients is not supported by the evidence-based literature.5 Therefore, canine guidance can safely be replaced by group function or premolar guidance.

One debatable issue is the relationship between occlusion and TMD. Studies have shown that occlusal factors have little influence on the multifactorial etiology of TMD.6,7 No statistically significant differences in the prevalence of TMD signs and symptoms were found when premolars replaced canines, compared with a group of patients with the maxillary canines in their normal positions.8,9

Another piece of conventional wisdom involves the notion of canine eminence, which has been considered a key element in smile esthetics.10,11 In a comparison between patients who had canines replacing lateral incisors and a group treated with premolar extractions, the difference in canine eminence did not exceed 1.5mm when the mean archforms of the two groups were superimposed.12 In a more recent study, no statistically significant difference was found between canine extraction and premolar extraction patients in terms of smile attractiveness, as assessed by general dentists, laypeople, and orthodontists.13

Based on our experience, we consider a unilateral canine eminence more of an esthetic concern than its bilateral absence. Asymmetries are more noticeable by dental professionals and even by laypeople. In fact, while orthodontists could detect a .5mm decrease in crown length, general dentists and laypeople could not detect a unilateral crown-length discrepancy until the crown was 1.5-2mm shorter than on the contralateral tooth.14

Other clinical situations, such as impaction and transposition, may warrant the extraction of one or more canines.16 In planning treatment of an impacted canine, two factors must be considered: prognosis and treatment duration. Prognosis worsens with age: the average success rate for alignment of impacted maxillary canines is only 70% after age 20, compared with 100% before age 16.17 Treatment duration is also affected by age: patients older than 25 require an average 30 more visits than younger patients do.18 Adult patients require significantly longer treatment and more visits to resolve canine impactions, in both simpler and more difficult cases.17 In addition, the angulation of the impacted canine and its distance from the occlusal plane are correlated with treatment duration.18,19 In an adult patient with a severe canine impaction, extraction of the canine instead of the conventional premolars will shorten treatment and minimize iatrogenic risks.

Three cases are presented to illustrate the results of unilateral and bilateral extractions of permanent canines in both arches.

A 40-year-old female presented with the chief complaint of crowding in both arches (Fig. 1). Tetracycline discoloration of the teeth was another concern. The maxillary right canine had been extracted during adolescence. She had a convex profile and a severe maxillary midline deviation to the right, but a stable Class I molar relationship. 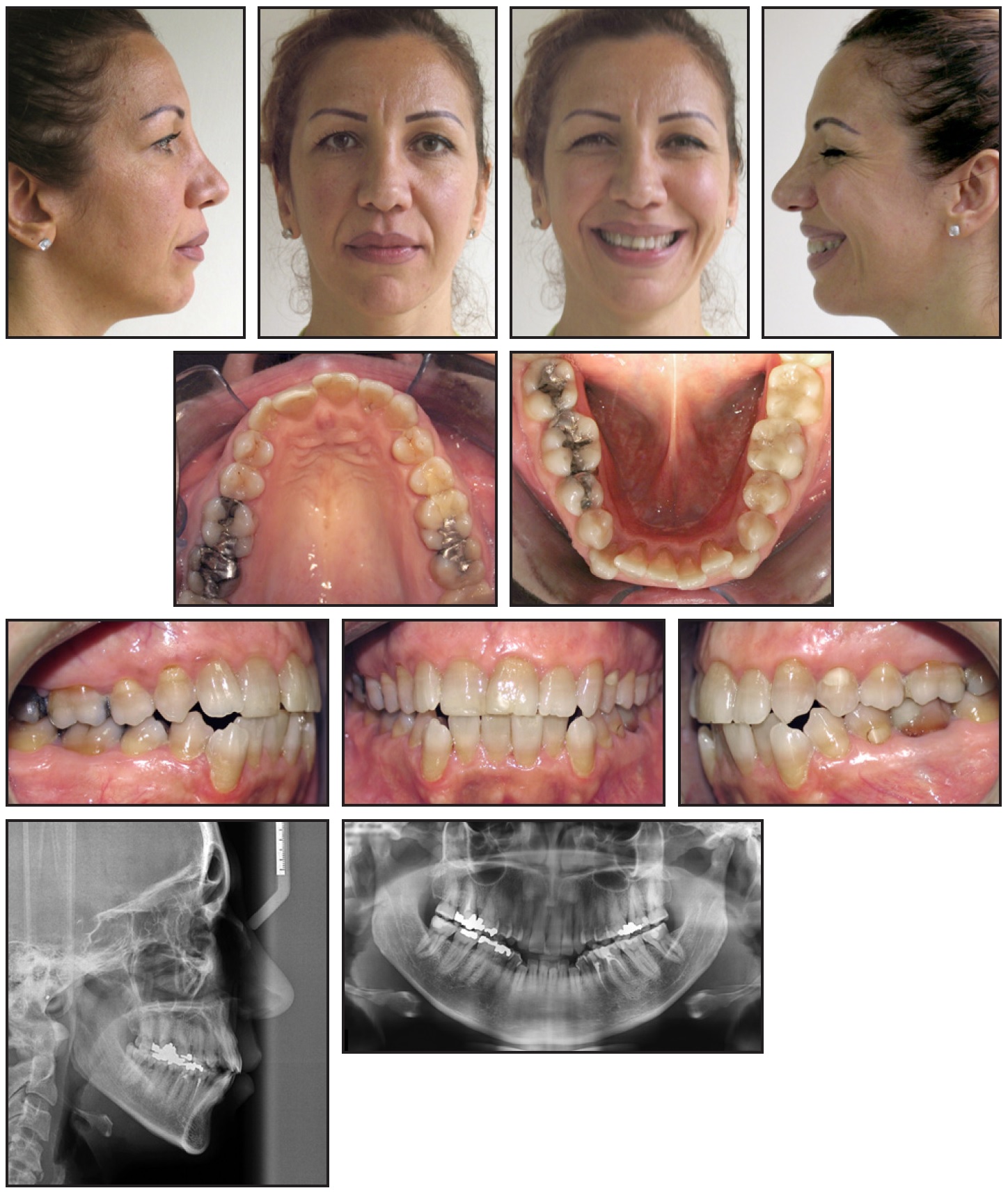 An .022" preadjusted appliance system was bonded in both arches. The upper right central incisor was not included in the archwire during leveling and alignment; in the lower arch, sectional wires were used for alignment of the buccal segments, excluding the incisors. The patient was referred for premolar extractions after an upper .016" × .022" stainless steel archwire and lower .016" × .022" sectional wires were placed. The upper left extraction space was closed using sliding mechanics with elastomeric chains, and the lower canines were retracted with sectional closing loops.

After 10 months of treatment, the extraction spaces were closed, and the upper left central incisors had drifted distally to help correct the midline. The lower incisors were engaged in the archwire once space was available. Negative crown torque was added to the upper right first premolar to simulate the inclination of a canine, using an .019" × .025" stainless steel finishing wire.

Active treatment time was 35 months (Fig. 2). Class I molar and canine relationships were achieved, and a stable occlusion with group function in lateral excursions was obtained. Fixed .0215" maxillary 2-2 and mandibular 3-3 wires were bonded and a maxillary Hawley appliance was delivered for retention. 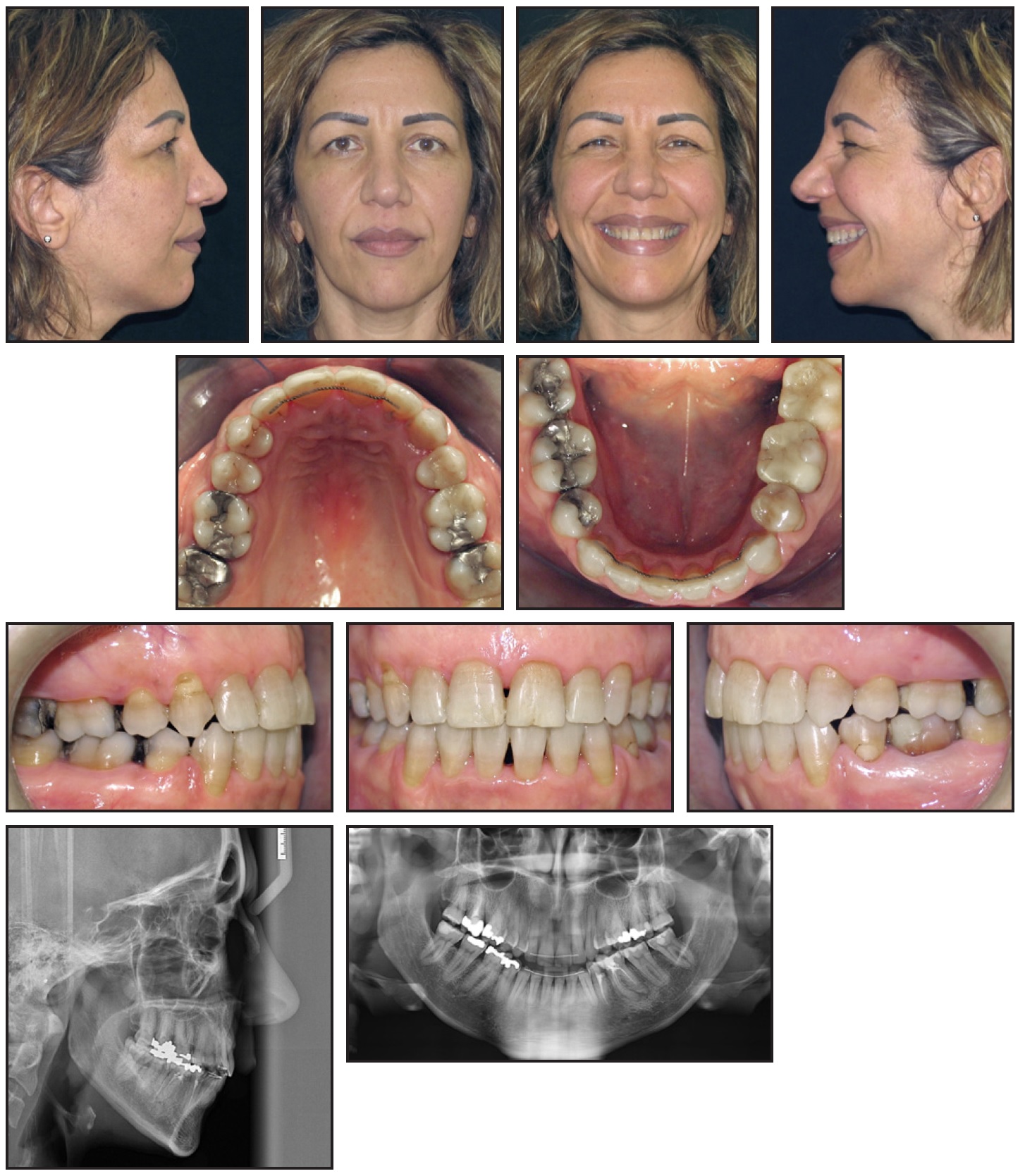 This 14-year-old male sought treatment because he was bothered by interference of the mandibular right canine with his tongue (Fig. 3). His profile was slightly convex, and there was insufficient incisor display in smiling. The molar occlusion was Class I, but a lack of space was evident in both arches. Both maxillary canines were impacted; cone-beam computed tomography confirmed an unfavorable position of the right canine. 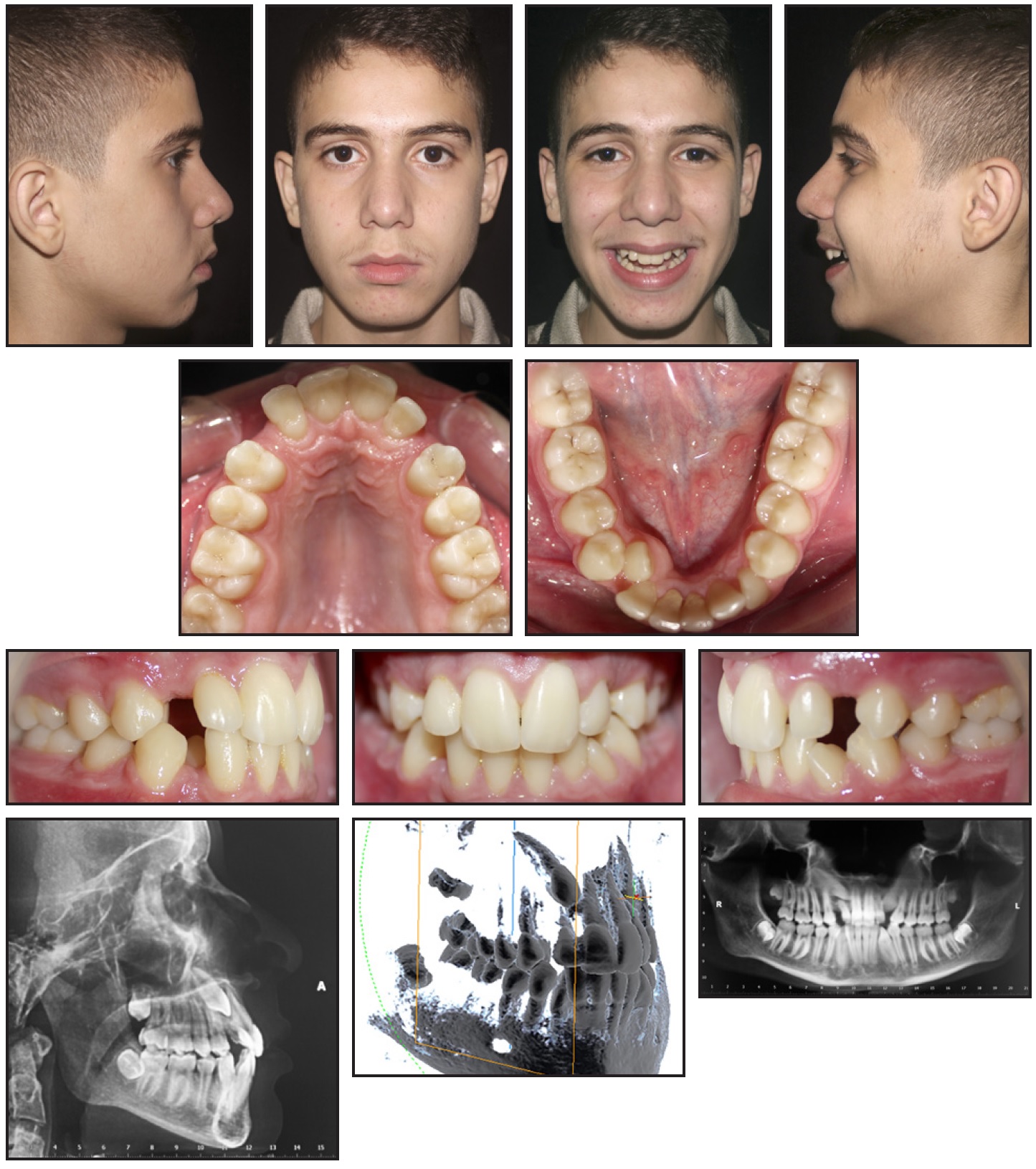 Extractions were needed in all four quadrants to achieve the orthodontic objectives. In the mandibular arch, extraction of two first premolars would provide enough space for alignment. In the maxillary arch, we decided to extract both canines to avoid the difficulty of aligning the right one and to ensure smile symmetry.

Treatment was initiated using a Hyrax* maxillary expander. After extraction of the lower first premolars, .022" preadjusted appliances were bonded in the lower arch and alignment was begun. The lower right canine was bypassed until an .017" × .025" stainless steel archwire was reached; at that point, .012" and .014" nickel titanium overlay wires were used to bring the canine into the arch.

After initially giving their consent, the parents were reluctant to have the impacted canines extracted, causing a five-month delay. Upper appliances were finally bonded after the extractions, and the expander was removed for the initiation of leveling and alignment. Space closure was performed using .017" × .025" stainless steel archwires, with torquing auxiliaries on the upper incisors. Seating elastics were prescribed for final settling.

Active treatment time was 41 months (Fig. 4). A stable Class I occlusion was obtained, with group function in laterotrusion and a pleasant smile. For retention, .0215" maxillary 2-2 and .028" mandibular 3-3 wires were bonded, and a maxillary splint was delivered. 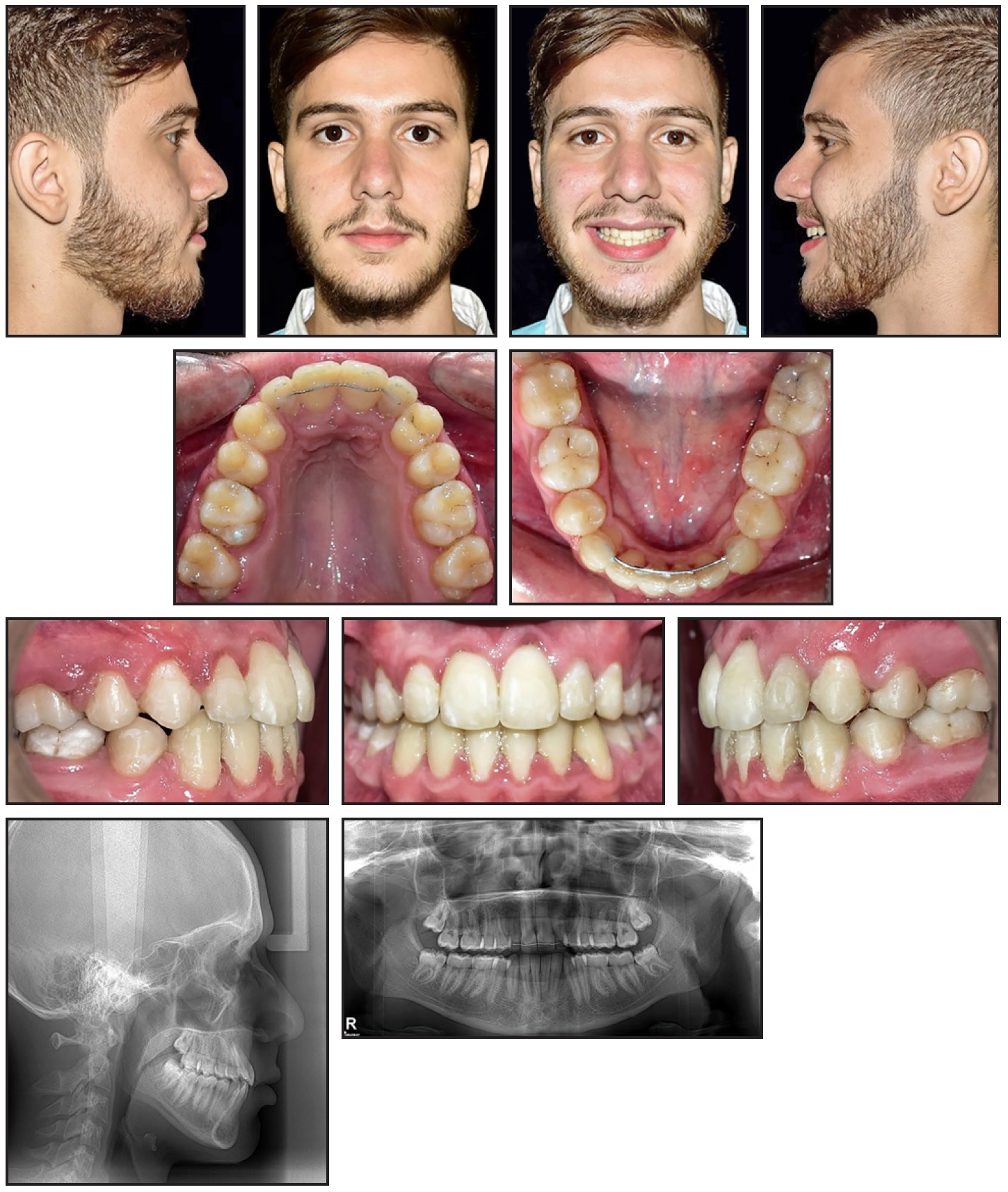 Fig. 4 Case 2. Patient after extraction of maxillary canines and mandibular first premolars and 41 months of treatment. 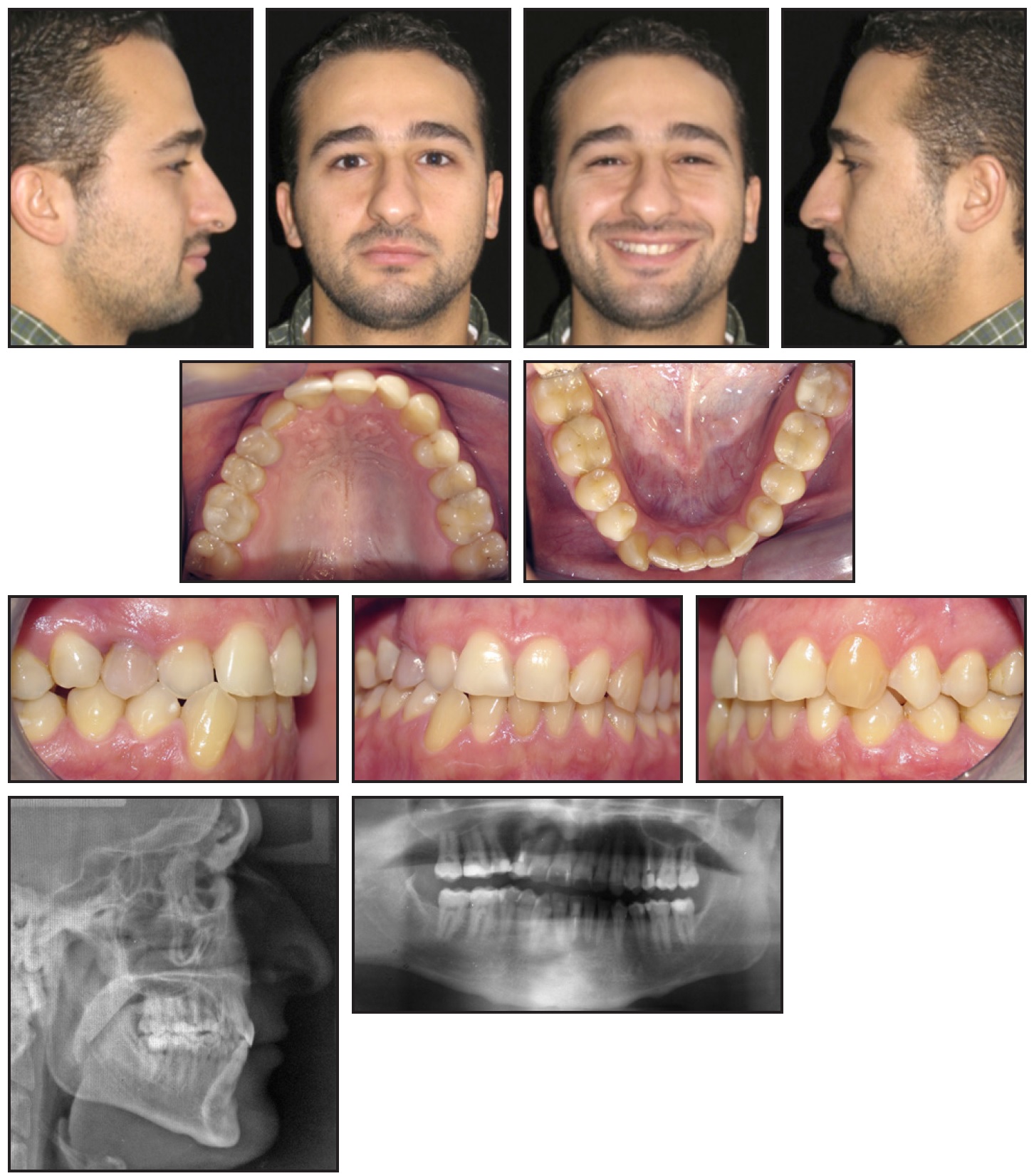 A conventional approach would have called for premolar extractions in the maxillary left and mandibular right quadrants to resolve the crowding and correct the midline deviation. Considering the significant differences in color, shape, and size between the premolars and canines, we decided instead to extract the remaining canines and to replace them with the first premolars.

Preadjusted .022" fixed appliances were bonded in both arches for six months of leveling and alignment. The patient was then referred for extraction of the canines. Tooth-by-tooth distalization was initiated first in the lower arch, using an .016" × .022" stainless steel archwire, to center the midline and obtain some incisor retroclination.

Similar mechanics were applied to distalize the upper left lateral incisor, followed by the left central incisor. Although time-consuming, this strategy minimized anchorage loss and helped preserve arch symmetry, considering that the space closure was unilateral.

After 18 months of treatment, .019" × .025" stainless steel archwires were inserted in both arches to achieve torque expression and arch coordination.

A Class I molar occlusion was achieved in 32 months of active treatment (Fig. 6). An .028" mandibular 3-3 wire was bonded and a maxillary Hawley appliance was delivered for retention. 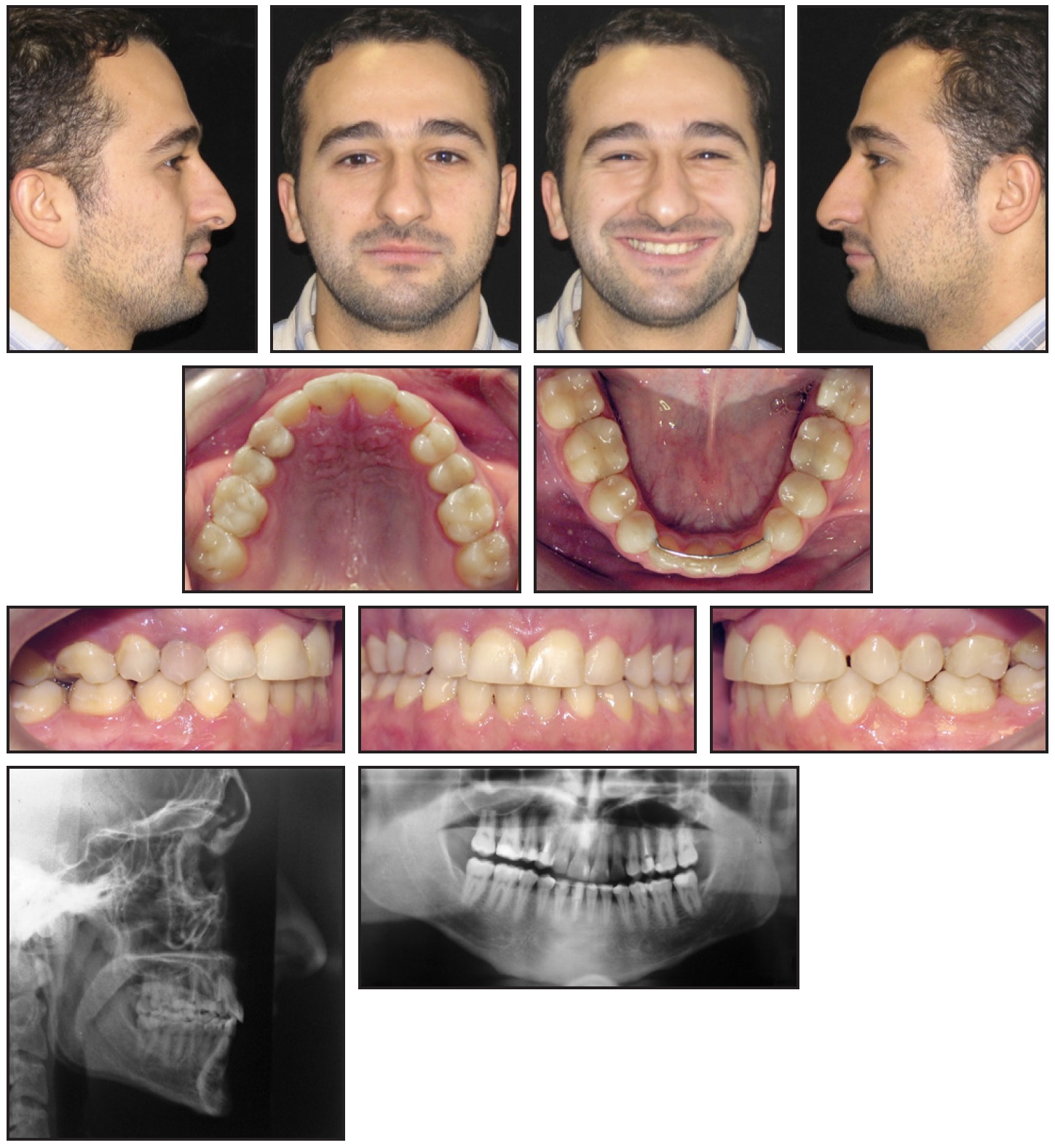 Fig. 6 Case 3. Patient after extraction of maxillary left and mandibular right canines and 32 months of treatment.

Extraction of permanent canines is seldom considered as a treatment option. As shown in this article, however, satisfactory esthetic and functional outcomes can be achieved in selected cases where the benefits outweigh the risks. 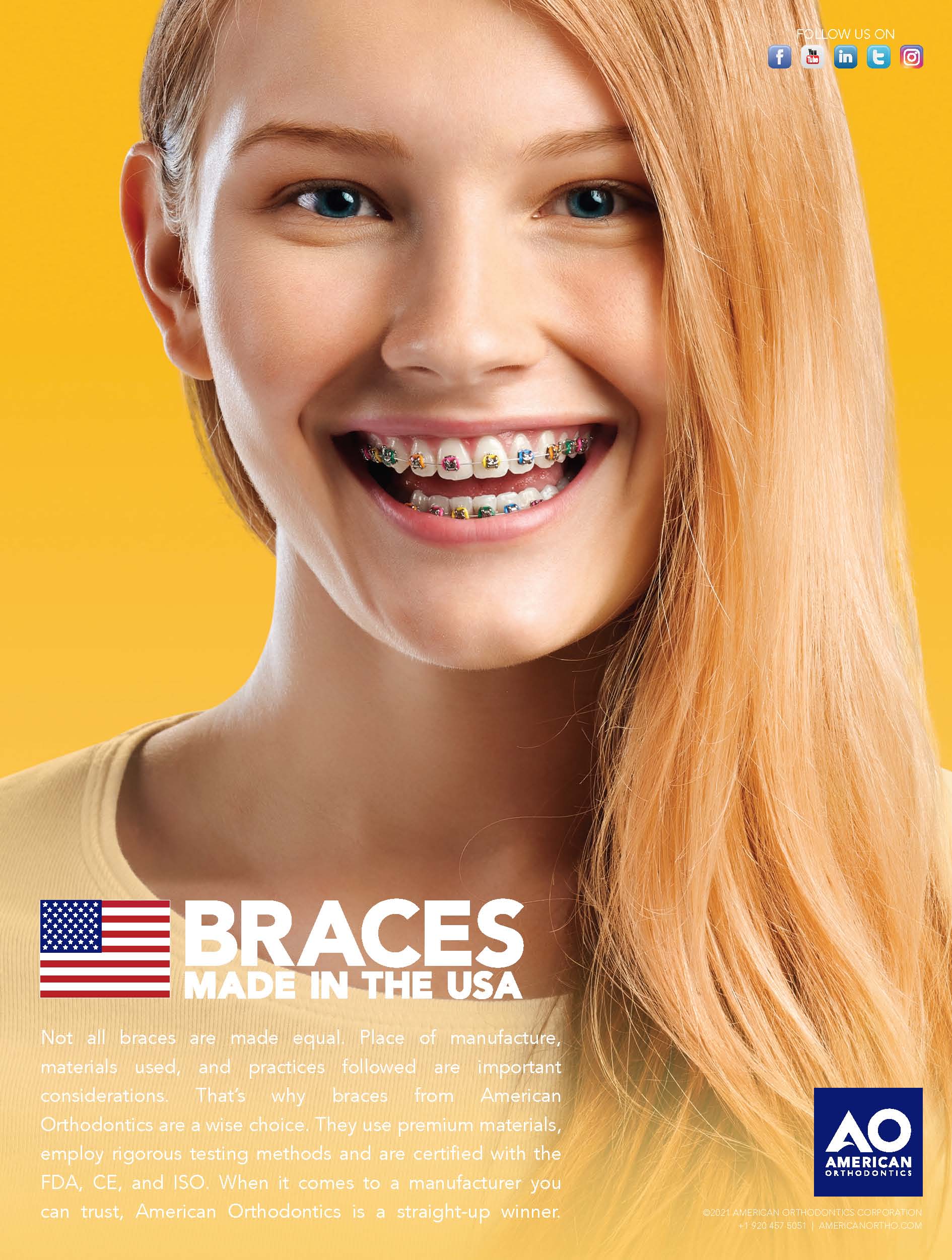 Fig. 4 Case 2. Patient after extraction of maxillary canines and mandibular first premolars and 41 months of treatment.

Fig. 6 Case 3. Patient after extraction of maxillary left and mandibular right canines and 32 months of treatment.