Canine transposition is generally associated with other anomalies, such as agenesis (40%), deciduous canine retention (50%), and peg-shaped maxillary lateral incisors (25%).9 The etiology of transposition may involve various environmental and genetic causes, including lack of canine root resorption, mechanical interference with erupting permanent teeth, migration of a tooth from its normal path of eruption,9-15 early loss or prolonged retention of deciduous teeth,13,14 a genetic interchange in the position of developing tooth buds during odontogenesis, or hereditary factors.7,8,16 Canine and lateral incisor transposition usually results from dentofacial trauma in the deciduous dentition and subsequent drifting of permanent teeth,4,10,16 although a genetic basis cannot be totally excluded.10-12

Several options are available to manage transposed teeth, including early interceptive treatment by guided eruption, extraction of one transposed tooth followed by orthodontic space closure, and alignment of the teeth in the transposed locations followed by selective reshaping or composite build-ups. Orthodontic correction of dental transpositions is more complicated.15,17-26 Since the alveolar ridge is usually not wide enough to accommodate two dental roots moving past each other, root parallelism will likely be less than ideal, and gingival recession may occur as the roots move outside the alveolar housing (Fig. 1). Alignment of the teeth in their transposed locations is more predictable, although some patients may be dissatisfied because of poor esthetics or function. 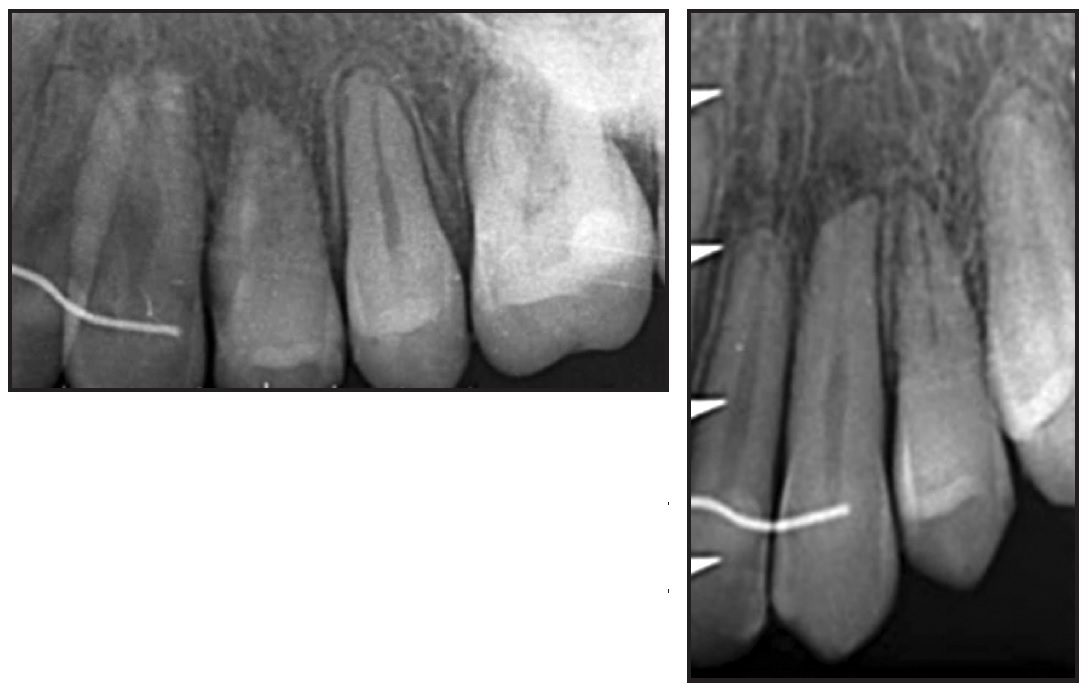 Five specific factors should be considered in treatment planning:

1. Tooth morphology. Patients are more likely to accept transpositions if the sizes and shapes of the transposed teeth are similar.

2. Facial profile and degree of crowding. Extraction may be the best way to solve a transposition problem if it is indicated for other reasons.

4. Developmental stage and positions. If the transposed teeth are at different heights, successful orthodontic correction is more likely. Early treatment to move a transposed canine before its full eruption can take advantage of this spatial relationship, avoiding root contact during correction.

5. Treatment time. Orthodontic correction usually requires a longer treatment period and may involve more invasive surgical procedures and increased risk of root resorption or periodontal impairment. The relative duration of various treatment options should be considered in terms of the cost-benefit ratio.

Improvements in aligner materials and virtual planning of tooth movement have contributed to increased clinical experience with aligner treatment of complex cases involving premolar extractions, molar distalization, deep bites, crossbites, periodontal complications, and prosthetic rehabilitation.27-36 To our knowledge, however, the use of clear aligners to correct transposed canines has not previously been reported.

In a case involving canine and lateral incisor transposition, clear aligners can easily produce the initial dentoalveolar expansion and interarch coordination needed to accommodate the eruption of transposed teeth. Subsequent forced eruption can be accomplished with auxiliaries such as elastomeric traction applied directly to sequential aligners. Finishing of buccolingual tooth positions can be performed using an additional digital setup to assess the torque of all teeth and ensure meticulous attention to esthetic details.

A 13-year-old female in the permanent dentition presented with a persistent upper right deciduous canine and an ectopically impacted permanent canine (Fig. 2). 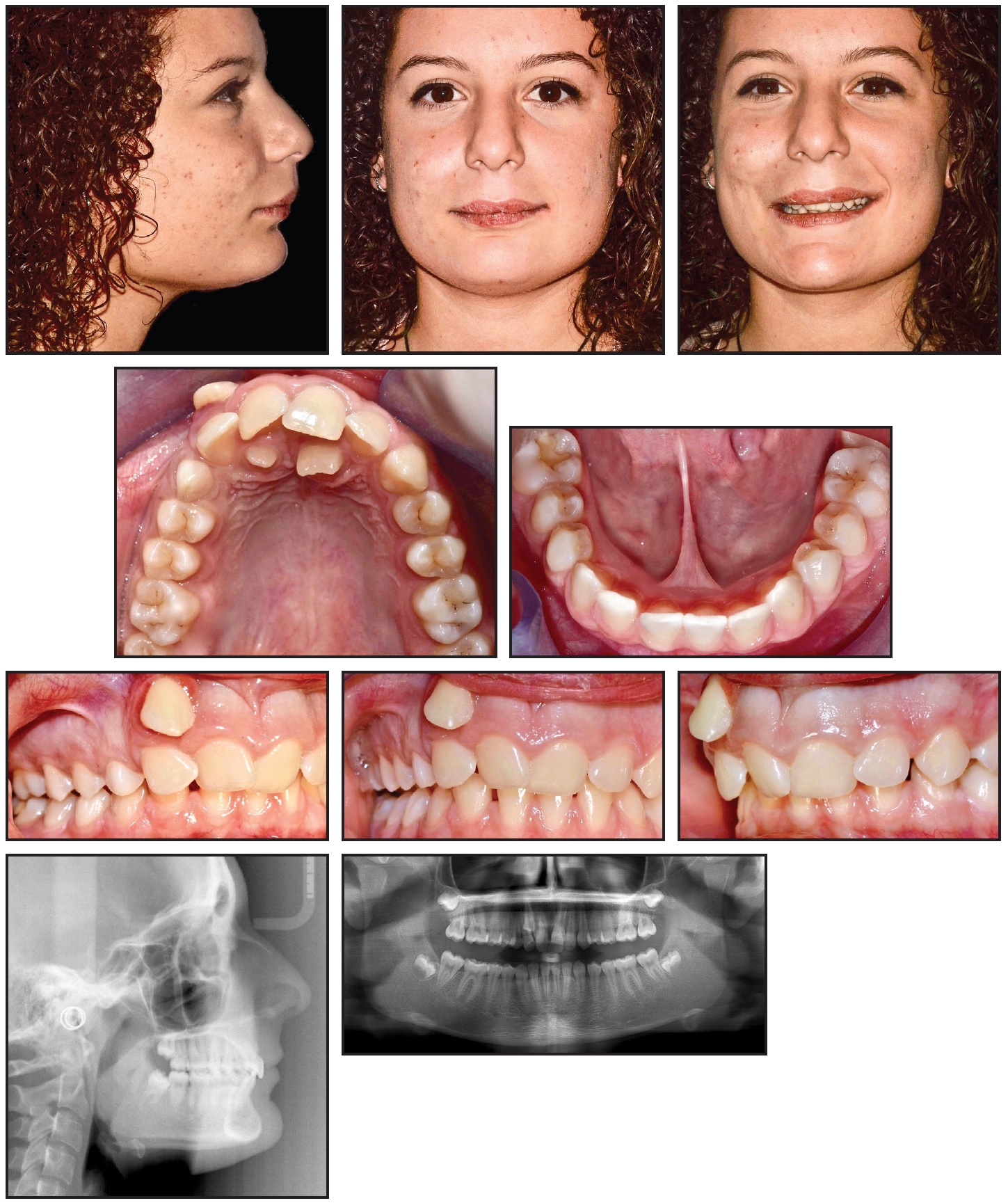 Clinical examination found Class II molar and canine relationships and a severe deep bite, with an accentuated curve of Spee. The upper right permanent canine was ectopic and highly displaced in the vestibule, in complete transposition with the right lateral incisor. The patient had a symmetrical face, a straight profile, a normal nasolabial angle, an accentuated labiomental groove, a prominent symphysis, and a short lingual frenulum. The smile arc was narrow, with an irregular curvature but no excessive gingival exposure, and lip competence was adequate at rest. Because of the canine transposition, the upper midline was deviated 5mm to the right and the lower midline 3mm to the left.

The panoramic radiograph confirmed a complete canine and lateral incisor transposition, the persistence of the upper right deciduous canine, and the presence of two anomalous supernumerary teeth in a palatal position. All four third molars were in a mid-developmental stage. Cephalometric analysis indicated a hypodivergent skeletal Class II malocclusion (Wits appraisal = +3.2) with a normal mandibular structure (Table 1). 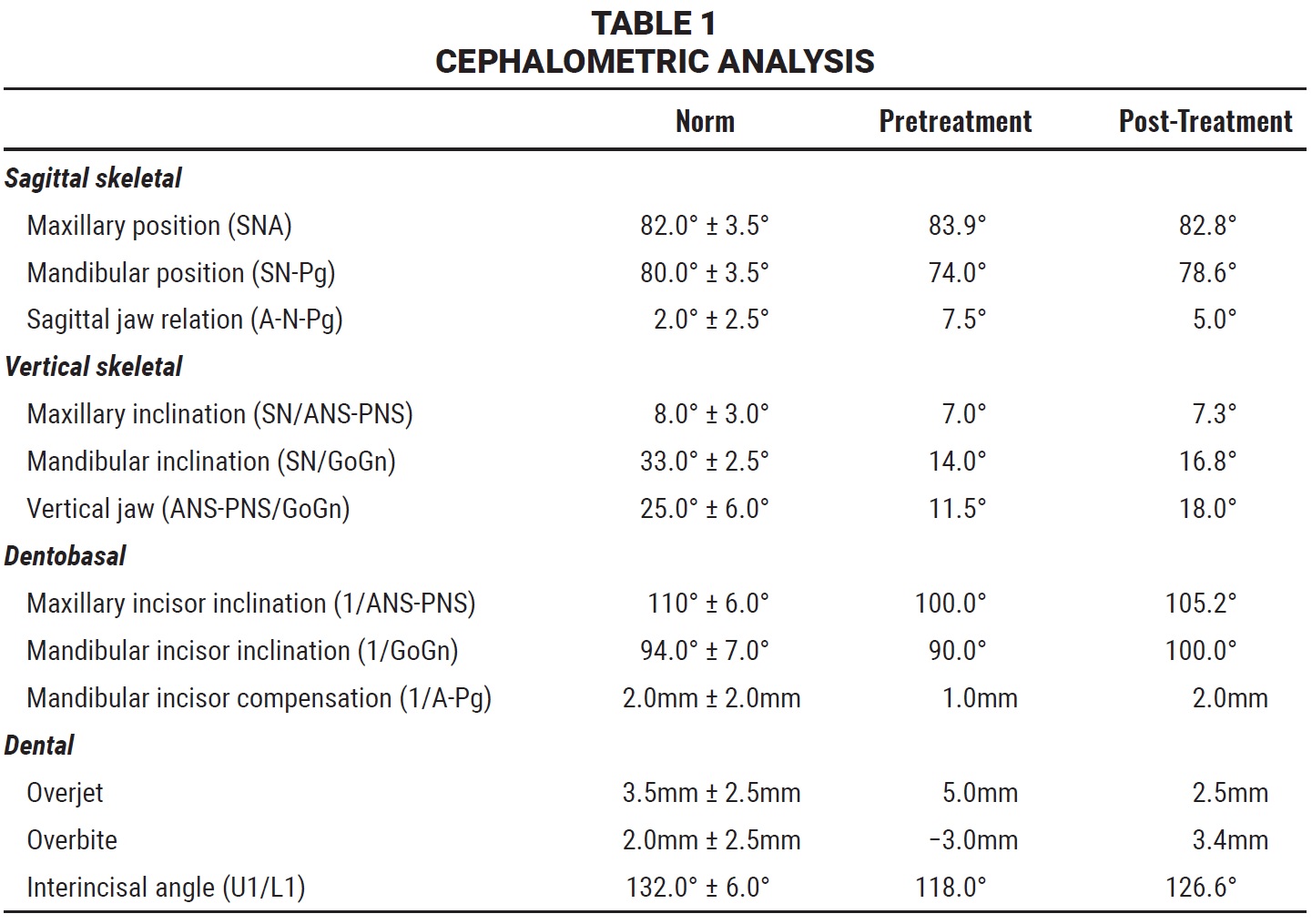 Treatment objectives were to resolve the malocclusion and move the ectopic canine into the dental arch. As the least invasive option, the treatment plan would begin with extraction of the deciduous canine and the two supernumeraries, followed by correction of the bilateral Class II relationship, overjet, and overbite; recovery of the upper right canine; and final harmonization of facial esthetics. The patient and her parents preferred the use of Invisalign* clear aligners because of her history of allergic reaction to metals. Considering the current capabilities of aligner treatment, we believed it would be biomechanically effective for correction of the transposition. Based on the ClinCheck* simulation, the treatment would last about 24 months, including two series of refinement aligners (Fig. 3).

During the first phase of treatment, the patient changed aligners every two weeks. She was seen every four to six weeks for evaluation of aligner fit, attachment stability, and cooperation. After four months, enough space had been opened for canine extrusion. This was achieved over five months by means of a light auxiliary elastic stretched over the aligner between the palatal and buccal surfaces of the canine (Fig. 4).

At this point, a second phase of treatment was planned with a new ClinCheck simulation (Fig. 5).

The main objectives were to complete the canine extrusion and optimize torque. Leveling of the anterior gingival contours was planned to obtain a more esthetic smile and to promote oral hygiene. During this phase, aligners were changed once per week.

The Class II relationship was corrected with retraction from 6mm, 4.5oz Class II elastics, worn 22 hours per day for about one year. After the first phase of aligner treatment, the outcome was further refined with eight aligners in each arch.

The total treatment time was 24 months, using 40 sets of aligners in the first phase and 27 in the second (Fig. 6). 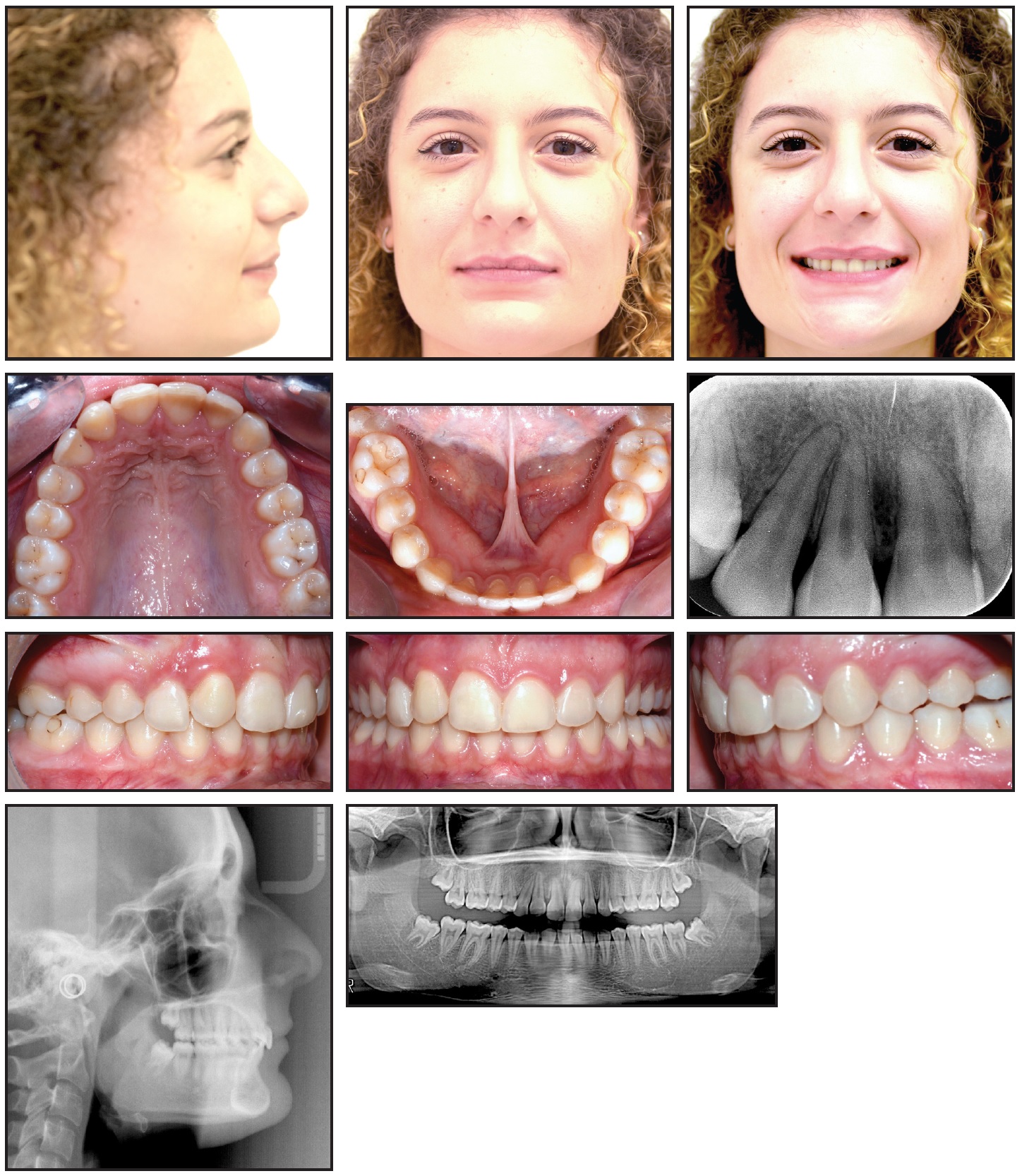 Fig. 6 Patient after 24 months of treatment.

The patient complied with the treatment plan, and all objectives were achieved (Fig. 7).

The Class II malocclusion was corrected (Table 1), and the upper right canine was properly positioned in a functional relationship with the opposite arch.

Although the angulations of the maxillary canine roots were not ideal on the final panoramic x-ray, the results compared favorably with those of similar cases treated with fixed appliances alone. The upper lateral incisor roots maintained a “neutral” tip, as was seen before treatment. No root resorption was evident on the final panoramic or apical x-rays. The final canine torque seemed to be normal, despite the complexity of the movement performed by the clear aligners. The periodontal tissue was healthy overall, with appropriate alignment of the anterior gingival margins and a pleasant smile. Esthetic procedures to optimize detailing of the transposed teeth and smile display would be considered after skeletal maturation.

Clear Vivera* overlay retainers were delivered to be worn at night in both arches. The results remained stable one year after treatment (Fig. 8). 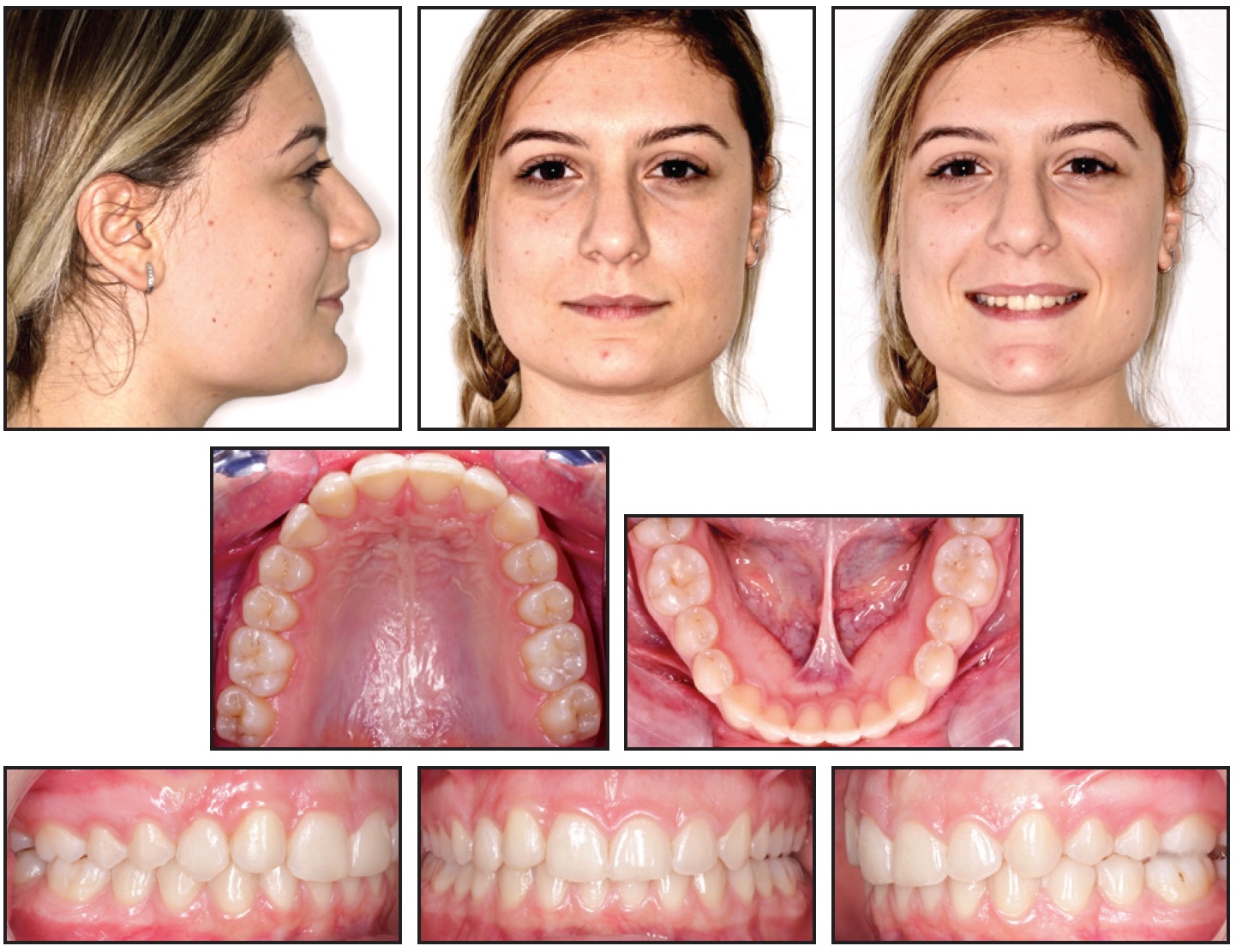 Orthodontic correction of transposed teeth is one of the most challenging kinds of treatment, requiring perceptive diagnosis, meticulous execution of biomechanics, multidisciplinary cooperation, ideal finishing, and long-term follow-up to assess the achieved outcome. Careful attention must be paid to the individual patient’s situation—including esthetics, function, periodontal status, and the prospects for compliance and tolerance of protracted treatment—before embarking on a heroic treatment plan. Orthodontic correction will likely be unsuccessful if attempted either too early or too late.13 In some cases, it may be preferable from a biological, biomechanical, and occlusal point of view to maintain the transposed teeth in their original locations.

Progressive innovations and technological advances with clear aligners have expanded their application well beyond the minor tooth movements performed in the early days of their use. Improvements in aligner materials, force systems, staging of tooth movements, and treatment planning have enabled the Invisalign system to treat complex malocclusions with precise and predictable outcomes. As this article demonstrates, it is now possible to correct tooth transpositions with aligners, given proper diagnosis and treatment planning.

Conventional radiography may provide contradictory assessments of the relative positions of transposed teeth. In one analysis of ectopic canine location among Swedish children, conventional periapical radiography was accurate in 80% of the cases, while the remaining 20% required tomographic analysis.37 A detailed virtual setup using the ClinCheck projection is an added benefit of the Invisalign protocol. During the diagnostic phase, the ClinCheck can help establish the extent of the malocclusion; during the therapeutic phase, it can verify the reproducibility of a programmed treatment. A simulation of progressive transposed tooth movement would be a useful further development of the software for transposition cases. 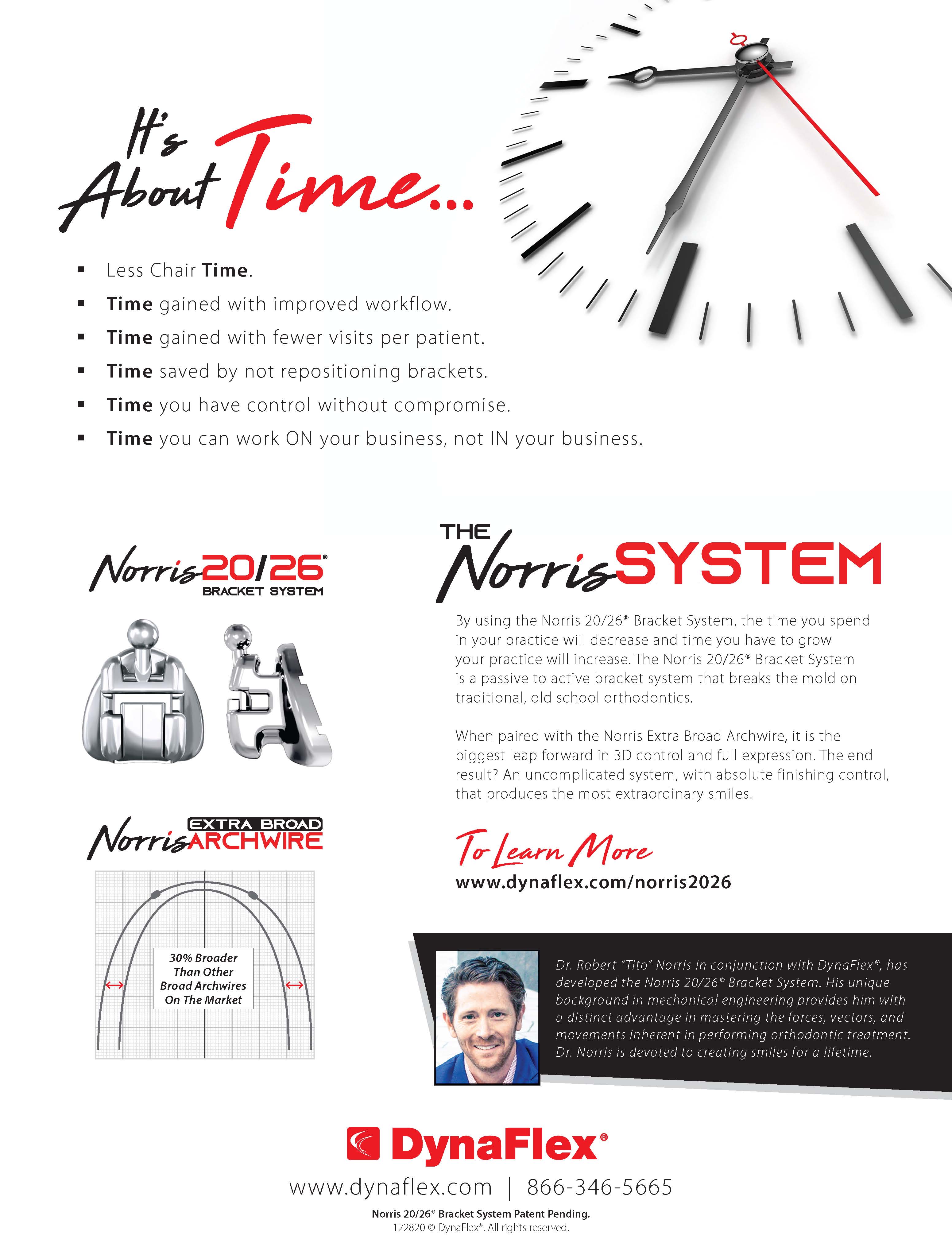 Fig. 6 Patient after 24 months of treatment. 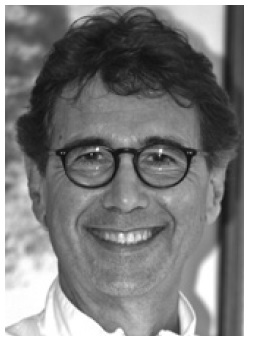 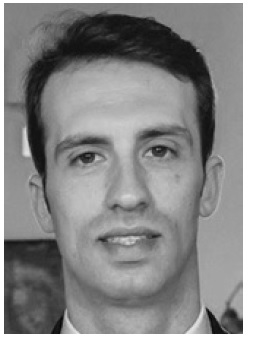