Skeletal anterior open bite is one of the most difficult problems to treat in orthodontics. In severe adult cases, treatment usually requires surgical repositioning of the maxilla or mandible. When a patient rejects surgery, alternatives include extraction treatment,20 molar intrusion with skeletal anchorage, a vertical-pull chin cup, multiloop edgewise archwire (MEAW) therapy, or nickel titanium archwires with intermaxillary elastics.21 Although extrusion or eruption of anterior teeth is a common method of bite closure, Reitan and Rygh have reported that extruded anterior teeth are less stable than intruded teeth.22 Extrusion of maxillary anterior teeth might also compromise facial esthetics, especially in a patient with a gummy smile.23

A 27-year-old female presented to the orthodontic department at Lebanese University with the chief complaints of proclined upper anterior teeth and crowding in the lower arch. She exhibited a convex profile, an acute nasolabial angle, excessive lower facial height, lip incompetency at rest, and inadequate extension of the chin (Fig. 1). On smiling, she displayed the lower incisors and less than the full crowns of the upper incisors. 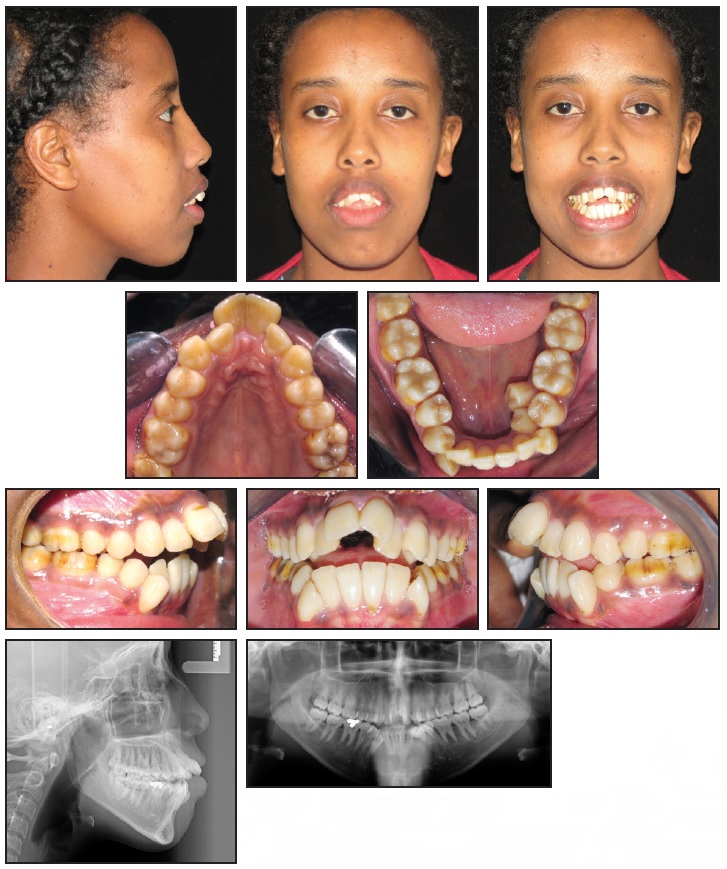 The intraoral photographs and dental casts revealed an anterior open bite of 10mm and an overjet of 15mm. In addition, two distinct occlusal planes were present in the upper arch. The lower arch had severe crowding, with the canines completely blocked out and the left first premolar and a supernumerary premolar blocked in. The upper dental midline was aligned with the facial midline, but the lower midline was deviated 2mm to the right. Sagittally, the molars were in a 2mm Class III relationship, the right canine was in a Class III relationship, and the left canine was in a full Class II relationship.

The patient was a mouth-breather and had a tongue thrust at rest. TMJ examination revealed clicking on both sides, with bayonet closure but no pain. Radiography showed a restoration at the level of the lower right first molar, as well as mesially inclined lower canines and premolars. 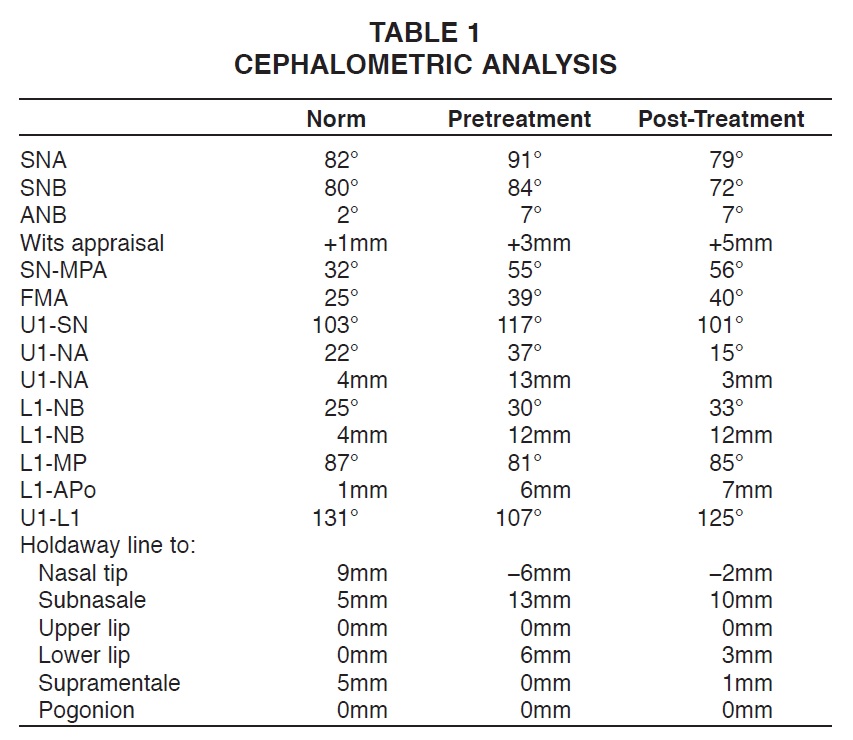 The mandibular plane angle was steep, and the gonial angle was severely increased (MP-FH = 39 degrees). The upper incisors were extremely proclined; the lower incisors were retroclined. Treatment objectives were to correct the convex profile, reduce the lower facial height, widen the maxilla to ameliorate the V-shape archform, relieve the crowding, and achieve a Class I relationship with ideal overjet and overbite.

Two treatment options were presented to the patient. The first involved extraction of the supernumerary premolar, followed by orthodontic movement of the upper second premolars and lower first premolars to relieve the mandibular crowding and to prepare a Class II relationship before surgery. Orthognathic surgery would consist of a double-jaw procedure with maxillary anterior setdown and setback and mandibular advancement to correct the convex profile and obtain an ideal occlusion. This could be combined with a genioplasty.

The second treatment option called for extraction of the upper and lower first premolars and the supernumerary lower premolar, followed by orthodontic therapy to retract the upper incisors, close the anterior open bite, relieve the lower crowding, and correct the Class III molar relationship and the Class II canine relationship on the left.

Although the first option was recommended to the patient, she chose the nonsurgical approach due to the risks associated with surgery. Genioplasty was presented as a way to reduce her lower vertical height and convexity by means of vertical reduction and advancement, but she also refused this option.

The patient was referred to the occlusion department for monitoring during orthodontic treatment. Caries control was performed, and oral-hygiene instructions were given.

A Nance appliance and transpalatal bar were cemented to the upper first molars. An .022" × .028" Roth-prescription preadjusted edgewise appliance was then bonded in both arches, bypassing the upper incisors. Upper and lower .016" stainless steel archwires were placed, but were worn passively in the lower anterior region to prevent flaring. After one month of treatment, .018" stainless steel archwires were bent passively to fill the bracket slots.

Another month later, the four first premolars and the supernumerary lower premolar were extracted. Double J-hooks were placed mesial to the upper canines, lower right canine, and left second premolar for derotation and to create space for the left canine (Fig. 2). The patient was instructed to wear the J-hook headgear 10 hours per day for distalization of the upper and lower canines.

One month later, gradual interproximal reduction was initiated, beginning with the lower left second premolar, to create symmetrical lower premolars. While the upper and lower canines were being distalized, bite closure occurred due to space opening for the upper incisors (Fig. 3).

After 11 months of treatment, enough space had been created to bond the upper incisors. An .014" nickel titanium overlay wire was placed, followed by an .018" nickel titanium and continuous .018" stainless steel archwires.

After 17 months of treatment, retraction of the upper anterior teeth was begun with closing-loop mechanics, using an .017" × .025" stainless steel archwire (Fig. 4).

Posterior vertical elastics were worn to achieve good interdigitation and help close the bite. After finishing and detailing, treatment was completed in a total of 30 months.

With a proper overbite and overjet achieved, the fixed appliances were removed. Retention was mainly directed toward preventing relapse in the vertical dimension. Upper 2-2 and lower 3-3 retainers made of multistranded .0215" stainless steel wire were bonded. An upper Hawley retainer was delivered, with some anterior acrylic removed as a tongue-position reminder. The patient was instructed to wear it for six months full-time, then for six months at night only, and then at night three times a week.

The treatment objectives were achieved, in part due to perfect patient cooperation with the headgear and intraoral elastics and optimal oral hygiene. The extractions in the upper arch allowed the anterior teeth to be retracted, facilitating bite closure and overjet reduction (Fig. 5A). Profile convexity was improved, as was lip closure. When the patient smiled, an expanded maxillary arch and full upper-incisor-crown display were evident.

Fig. 5 A. Patient after 30 months of treatment.

Post-treatment records showed bilateral Class I molar and canine relationships. Both dental midlines were reasonably well aligned with the facial midline, and optimal overjet and overbite were achieved. Cephalometric analysis revealed no change in ANB (Table 1). In addition, no significant clinical changes in the vertical measurements were noted, indicating that the mechanics were able to control vertical movement of the posterior teeth. The upper incisors were extruded and retroclined, and the lower incisors were slightly proclined and extruded (Fig. 5B). 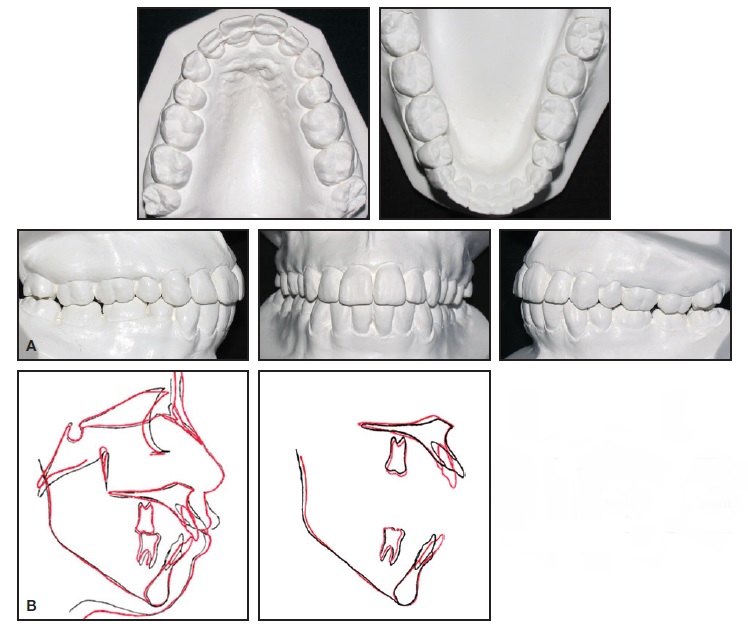 Fig. 5 (cont.) A. Patient after 30 months of treatment. B. Superimposition of pre- and post-treatment cephalometric tracings.

Soft-tissue analysis showed an improvement in the lower-third convexity by backward positioning of the lower lip in relation to the Holdaway line, improving lip closure at rest. The panoramic radiograph confirmed proper root parallelism. Supporting tissues appeared healthy, and no root resorption was noted.

The occlusion remained stable one year after treatment (Fig. 6). 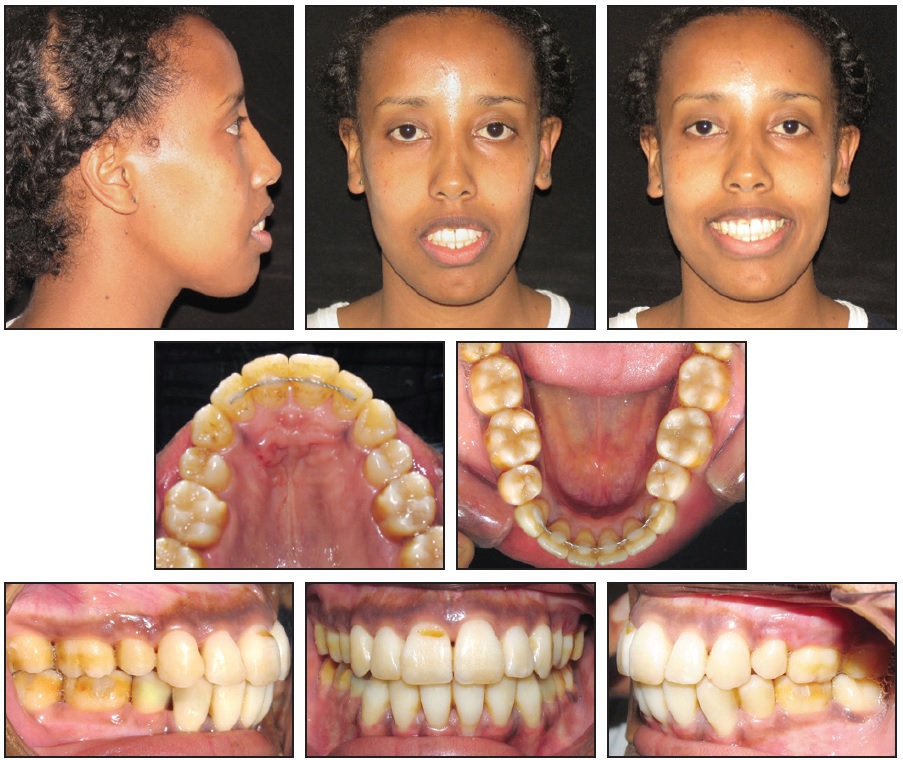 Skeletal open bite is ideally treated with a combination of orthodontics and orthognathic surgery. The advantages of the surgical option are that the overbite can be overcorrected, a gummy smile can be resolved, and post-treatment stability will be improved.24 In a nonsurgical plan, orthodontic treatment involves camouflaging the skeletal discrepancies, so that overcorrection and ideal esthetics and function can be achieved to the extent possible. Nonsurgical correction is more complicated and usually requires longer treatment.25

Sarver and Weissman proposed helpful guidelines for nonsurgical treatment of open bite in adult patients with no potential for growth modification, based on an approach using extraction and retraction.26 Although a limited number of open bites are amenable to this type of treatment, the authors advised that potential candidates would include those with proclined or procumbent upper or lower incisors, little or no gingival display on smiling, a normal craniofacial pattern, and no more than 2-3mm of upper-incisor exposure at rest. Our patient did meet several of these criteria.

Simple extrusion of anterior teeth to correct an open bite has been criticized as being unstable, especially considering that the vertical height of the anterior maxilla is already excessive in an open-bite case.27 Because our patient could afford some extrusion of the upper incisors, we were able to achieve a full incisor-crown display on smiling.

Stability is a concern with any open-bite malocclusion. Studies of long-term results of orthodontic treatment by Lopez-Gavito and colleagues17 and surgical treatment by Denison and colleagues24 indicate that the relapse rate can range from 35% to 42.9%. The latter study suggested that the relapse was caused by dentoalveolar rather than skeletal changes.24 Although these data may seem discouraging, they included some patients who experienced overbite reduction after treatment, but did not progress to an open bite. Chang and Moon reported that extraction treatment is more stable than nonextraction treatment.28

It is important to maintain the treatment results with fixed or removable retainers, especially to prevent labial flaring of the incisors. Retainers with occlusal coverage may be helpful in preventing further molar eruption, particularly in patients with remaining growth. If tongue posture and aberrant function were the causes of the open bite, they may also contribute to post-treatment relapse. Use of a tongue crib or lingual spurs during or after treatment may therefore improve stability.29-31

Although correction of an open bite cannot always be perfectly maintained, there are many patients who will benefit considerably from treatment with only orthodontic appliances. Prudent case selection and adherence to sound orthodontic principles can produce acceptable and, at times, outstanding treatment results.

In the case shown here, a nonsurgical approach did not allow a complete correction of the convex profile. Orthognathic surgery would also have enhanced stability. Still, the final result was a great improvement in both function and esthetics. This patient was successfully treated nonsurgically not only because of her excellent compliance, but also because of her proclined upper incisors and smile, which benefited from the retroclination of the upper anterior teeth.

Fig. 5A A. Patient after 30 months of treatment.

Fig. 5B A. Patient after 30 months of treatment. B. Superimposition of pre- and post-treatment cephalometric tracings.