Simultaneous Intrusion and Distalization Using Miniscrews in the Maxillary Tuberosity

Mini-implants can be used to manage severe dental crowding without extractions and to correct minor jaw malpositions without orthognathic surgery,1-4 eliminating the need for extraoral anchorage and patient cooperation. Intruding the posterior segments to correct an open bite by mandibular autorotation - traditionally difficult to achieve without extruding the incisors - is now possible with skeletal anchorage.

In this method of treatment, if miniscrews are placed in interradicular spaces, the buccal teeth cannot be distalized because the implants will act as stops. If they are placed in the palate, a device can be used to generate intrusive or distalizing forces on the posterior teeth without interference from the mini-implants,5-7 but there are other disadvantages: the risk of perforating the nasal cavity, the skill required to design such a complex force system, and the limitation of treatment to the maxillary arch.

Concomitant intrusion and distalization of upper and lower molars is possible by placing mini-implants in the maxillary tuberosity and the retromolar region of the mandible.8-10 Although these areas are not ideal because of poor bone quality, they are appropriate for en-masse movement without dental interference. Proper placement protocols and biomechanical design can lead to outstanding results, including such demanding movements as intrusion and arch expansion or narrowing.11-13

In an open-bite case with a mild skeletal Class II pattern and excessive lower facial height, traction from both upper and lower mini-implants can improve the efficiency of orthodontic treatment. Another possibility is to use simultaneous traction from the maxillary tuberosity and the maxillary anterior region to intrude and distalize the upper teeth, as described in this article.

When a mini-implant is placed in the maxillary tuberosity, any lack of primary stability will require relocation of the implant to an area with better bone. A hand-piece that measures the insertion torquing force is helpful in determining the primary retention strength of the implant. A torqueing force greater than 5Ncm is required for immediate loading. A force greater than 10Ncm will result in bone microtrauma due to excessive compression; although this is an uncommon occurrence in the tuberosity, it will cause a loss of surrounding bone and consequent implant failure.14 If the torquing force is less than 5Ncm, the implant should demonstrate stability for at least a month before it is loaded with light orthodontic forces (about 150Ncm).15-17

To produce arch expansion or contraction in addition to distalization and intrusion, lingual traction can be applied from the mini-implants in the maxillary tuberosities to lingual attachments on the teeth. To compensate for the side effects of traction, buccal attachments should be added to the posterior teeth so they can be pulled from either side as needed. Arch expansion is generated by activating the lingual chain more than the buccal chain, or molar compression by activating the buccal chain more than the lingual chain.

A 25-year-old female patient presented with a skeletal Class II pattern, Class II molar and canine relationships (complete on the left and edge-to-edge on the right), excessive overjet, and a narrow maxilla (Fig. 1). 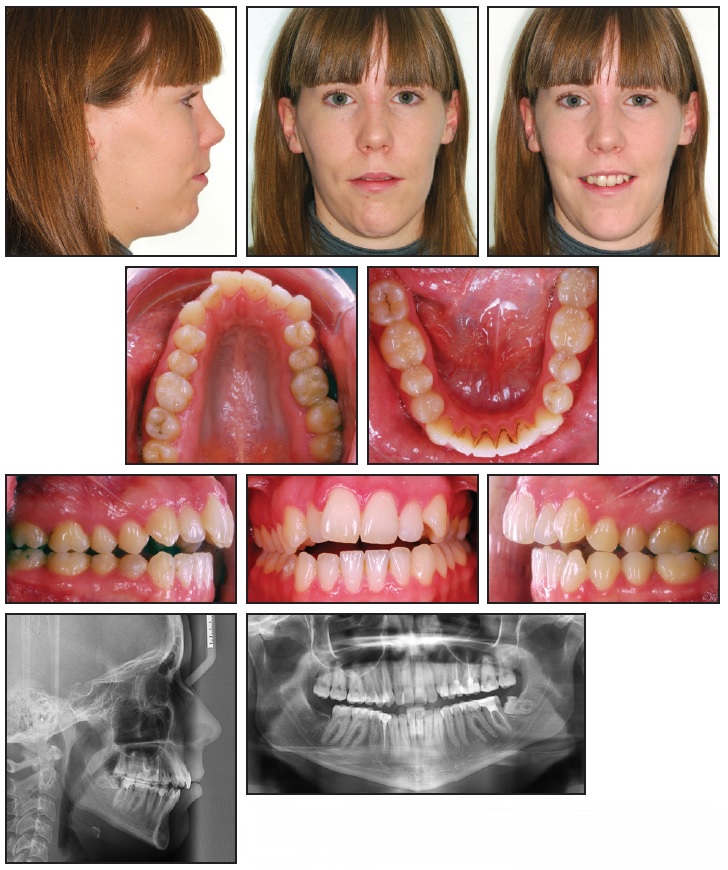 Her mouth-breathing habit had caused gingivitis of the upper incisors, and her vertical mandibular plane had led to lip incompetence that made it difficult to close her lips at rest. She displayed an open bite from premolar to premolar, a crossbite on the left side, and moderate crowding of the upper and lower anterior teeth. The upper and lower occlusal planes were tilted from left to right, causing the mandible to show a slight deviation to the left. The upper third molars were present, but the lower right had been extracted and the lower left was mesially impacted.

Traditionally, an anterior open bite and excessive lower facial height require orthognathic surgery to impact the posterior maxilla, allowing mandibular autorotation until the anterior teeth contact and thereby resolving the skeletal Class II pattern. Because this patient refused surgery, the treatment plan was to use miniscrews in the maxillary tuberosities to distalize the upper dentition.

Considering the absence or impaction of the lower third molars, the upper third molars were extracted, providing space for miniscrew placement in the maxillary tuberosities and for subsequent distalization. The extractions were performed six months prior to mini-implant placement to ensure primary stability.

Two Dual-Top* JA standard mini-implants (1.6mm x 10mm) were placed distal to the second molars in the maxillary tuberosities (Fig. 2). One and a half months later, since the patient wanted to be treated with invisible appliances, the Incognito** lingual system was bonded and an .014" nickel titanium archwire was inserted (Fig. 3). This appliance is compatible with skeletal anchorage and has proven reliable in complex treatments. Gentle force was applied with elastic chain from the miniscrews to distalize the upper teeth. To prevent undesirable transverse movement of the molars, tubes or brackets were bonded to the buccal surfaces of the first and second molars and connected by sectional .016" x .022" nickel titanium wires.

In less than a year of treatment, the anterior open bite was closed and the molar Class II malocclusion improved, but a posterior open bite had been created (Fig. 4A). Comparing the initial panoramic x-ray and a progress x-ray taken at that time, there was a considerable reduction in the distance between the upper second molars and the mini-implants, demonstrating a bodily maxillary retraction. 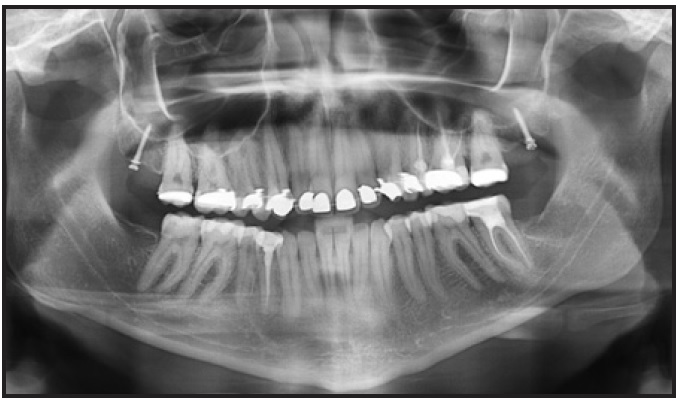 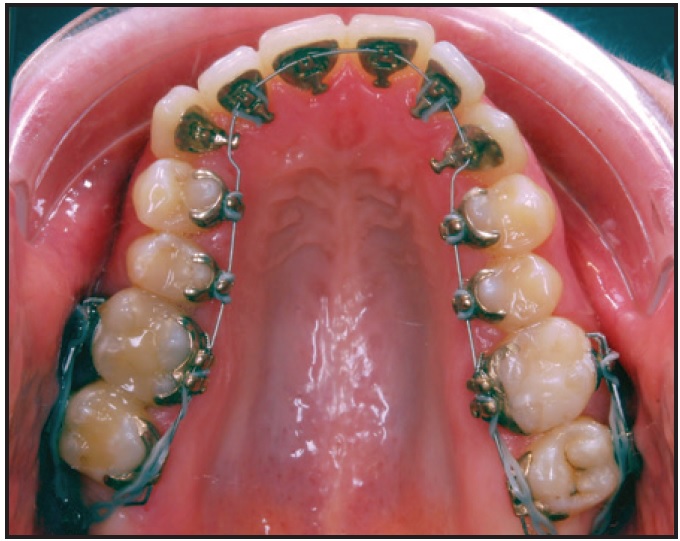 The posterior left crossbite and right edge-to-edge bite had been corrected by applying a bit more force from the lingual side, allowing expansion of the maxillary teeth to resolve the anteroposterior and transverse problems. As planned, there was a substantial amount of posterior intrusion. This changed the open bite from anterior to posterior; in other words, the divergence between the upper and lower occlusal planes had shifted to a convergence of planes. Because the distalization force was applied from the mini-implant in the tuberosity to the bracket at the crown level, distal crown tipping was inevitable. Bodily movement was achieved by passing the buccal chain over the molar tubes, creating a downward force, and by increasing the size of the lingual archwire (Fig. 4B). Incognito has an advantage in this respect because it uses a ribbon arch instead of an edgewise wire. Additionally, because the archwire has a large vertical cross-section, it compensates for the tipping effect by filling the bracket slot.

Six months later, this change in biomechanics had resulted in anterior extrusion, which inhibited autorotation of the mandible and exacerbated the gummy smile (Fig. 5). The maxillary cant became more noticeable because the gingiva was more visible on the right side than on the left.

Fig. 5 A. Six months later, cephalometric superimposition demonstrates extrusion of upper incisors and slight autorotation of mandible. B. Gummy smile more noticeable on right side due to canted maxilla.

Fig. 6 After 16 months of treatment, two Dual-Top mini-implants placed between roots of upper lateral incisors and canines, composite buttons bonded to labial surfaces of canines, and power chain applied from miniscrews to buttons.

Composite buttons were bonded to the labial surfaces of the canines, and power chain was attached from the miniscrews to the buttons. Simultaneous traction was applied to the four implants to intrude both the anterior and posterior maxillary dentition. After seven months of intrusion on both sides, traction was applied only to the right implants, especially the anterior one, to further intrude the incisors on that side while eliminating the maxillary cant (Fig. 7). The elastic chain was changed less often to maintain movement as long as possible and prevent relapse.18

Orthodontic treatment was completed in 31 months, with the open bite closed and the incisor overlapping corrected. A canine and molar Class I relationship and normal function were achieved, with anterior and canine guidance (Fig. 8A). The treatment approach described here resolved the skeletal Class II pattern while intruding the posterior segments, allowing mandibular autorotation. Anterior intrusion during the second half of treatment improved the patient's facial appearance by achieving parallelism of the upper and lower occlusal planes and eliminating the gummy smile. Counterclockwise rotation of the mandible then reduced the lower facial height and increased the chin prominence, resulting in a more esthetic profile. Long-term stability was enhanced by the achievement of functional harmony among the orofacial muscles. The patient could close her lips without straining the mentalis muscle, and her open-mouth posture, which had caused mouth-breathing and a lower tongue placement, was alleviated. 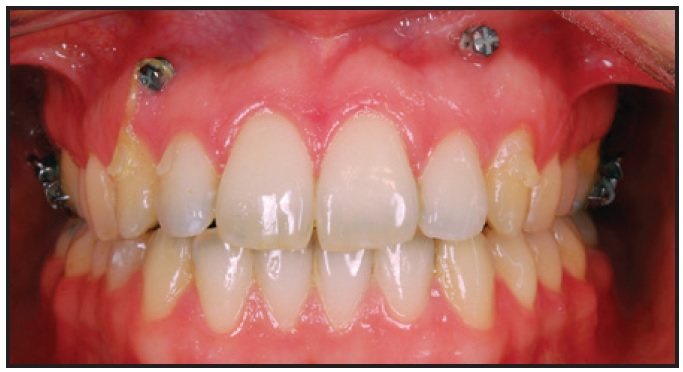 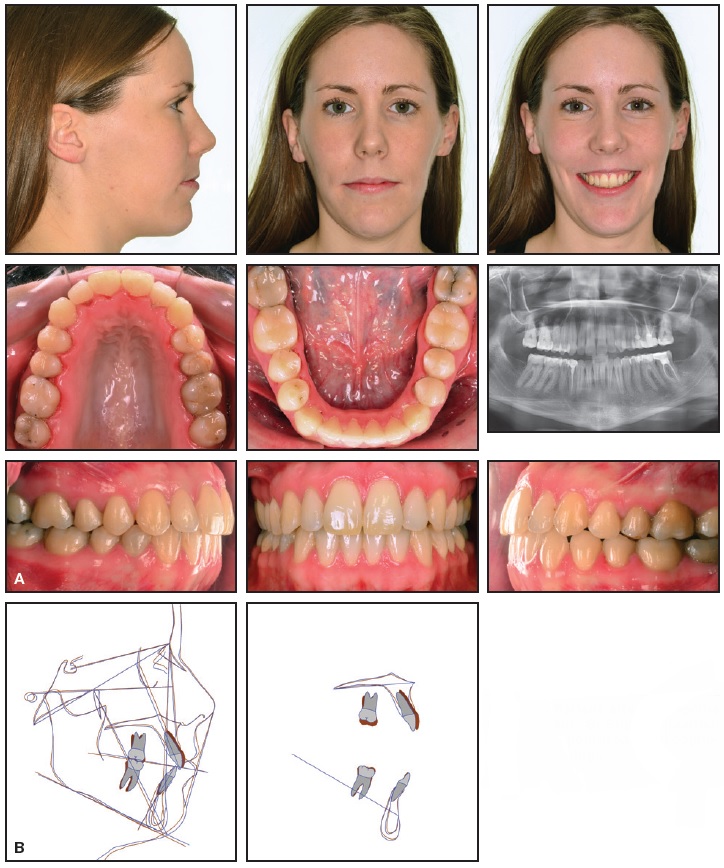 Fig. 8 A. Patient after 31 months of treatment. B. Superimposition of pre- and post-treatment cephalometric tracings.

Superimposition of pre- and post-treatment cephalometric tracings confirmed the intrusion of the upper molars, along with slight retroclination and extrusion of the upper incisors (Fig. 8B). The mandibular plane angle was reduced from 28.8º to 28.0º with respect to the Frankfort plane. The ANB angle decreased from 7.0º to 5.4º. Consequently, there was a shift from the obvious skeletal Class II pattern to a skeletal Class I.

When an open-bite case with a skeletal Class II pattern is treated using skeletal anchorage from palatal mini-implants, the intrusion must be carried out before the distalization, thereby prolonging treatment. An alternative would be to place both palatal and buccal mini-implants to achieve a neutral effect, allowing intrusion and distalization to occur without the teeth tipping buccally or lingually.3 The buccal implants can block distal movement, however, unless they are placed parallel to the roots, which is not always possible. Four implants are also needed, which increases the risks of insertion (particularly in the palate), as well as the cost and duration of treatment.

By contrast, skeletal anchorage from the maxillary tuberosity requires only one mini-implant on each side and does not interfere with distal tooth movement. Therefore, this is the ideal method in cases requiring simultaneous intrusion and distalization.

Intrusive forces applied to the upper posterior teeth generate a clockwise movement and a consequent counterclockwise mandibular rotation, so that minor changes in the upper posterior teeth can produce remarkable effects in the lower anterior region. Only 1mm of upper-molar intrusion can reportedly displace the chin up and forward by 3-4mm.19 In the case shown here, that effect was restricted by extrusion of the upper incisors. Because mandibular autorotation is limited by contact between the upper and lower anterior teeth, the upper-incisor extrusion had to be controlled with anchorage from two anterior mini-implants. On the other hand, excessive intrusion of the upper incisors should be avoided to ensure an esthetic smile line.

Mini-implant placement in the maxillary tuberosity requires careful consideration of a number of variables - including primary stability, loading, and applied force - due to the poor quality of bone. Although our patient's treatment time of 31 months was longer than that of an average orthodontic case, the lack of an established protocol for this technique required corrections to problems encountered as treatment progressed. After managing several similar cases, we developed a regimen that allowed us to achieve the same effects in less time.

The maxillary tuberosity offers many clinical advantages compared to other mini-implant insertion sites. Problems can be addressed simultaneously in all three planes of space. Maxillary teeth can be distalized without interfering with their roots. Both anterior and posterior teeth can be intruded when mini-implants are added in the anterior maxilla. Transverse movement can be controlled with traction from either the buccal or lingual side, which is ideal in an open-bite case and works well in a skeletal Class II case with extruded upper teeth and an extremely vertical mandibular plane. Mandibular autorotation can also be achieved.

This technique is a good alternative to orthognathic surgery, without the potential complications. Fewer mini-implants are needed compared to other systems, and no laboratory work is required. More research is needed to establish protocols for all possible combinations of mini-implants used to treat skeletal problems.

Dr. Sada Garralda is an Associate Professor in the master’s program, Department of Orthodontics, University of Valencia, Spain, and in the private practice of orthodontics at San Fermín 26 Bajo, 31003 Pamplona, Navarra, Spain; e-mail: vicente@topdental.es.