For these reasons, clinicians often decide to extract third molars before, during, or at the end of orthodontic treatment. Although the morbidity of third-molar extractions is fairly low, there is a risk of injury to the inferior alveolar nerve7 and of complications such as dry socket during healing of the extraction site.8 In addition, third-molar extraction is a risk factor for TMD.9 Complications are more likely to occur in cases of mesioangular7 and horizontal impactions.10 Mesioangular impaction is the most common type, occurring in 43% of the cases involving lower-molar impactions.10

Although uprighting of mesially tipped or impacted third molars would be an alternative to extraction, it is usually not feasible before debonding due to the late development of third molars. Skeletal anchorage offers the potential to upright molars separately with localized mechanics. Lee and colleagues used miniscrew-anchored sectional mechanics to upright lower second molars,11 but that method requires free access to the third molar's buccal crown - which is impossible if only the distal cusps have fully erupted. In such a case, treatment mechanics must be modified, as described in this article, to avoid the need for surgical exposure of the buccal tooth surface.

An orthodontic mini-implant is inserted interproximally on the buccal side of the alveolar ridge, with the exact location determined by clinical and radiographic assessment of the available space. In the examples shown here, Dual-Top* mini-implants 1.5mm in diameter and 8mm in length were placed after perforation of the cortical bone with a 1mm-diameter drill. To ensure enough clearance from the dental roots, the mini-implant should be inserted slightly above the mucogingival border at an oblique angle, with the slot of the screw head parallel to the occlusal plane.

A molar tube is then bonded to the distal cusps of the mesially impacted third molar and rotated 90º to direct the slot buccolingually. An .018" stainless steel wire is bent vertically from the tube to the level of the mini-implant slot, running parallel to the occlusal plane and ending with a loop a few millimeters mesial to the mini-implant. A clamp stop is positioned at the vertical bend, and a nickel titanium spring is placed between the stop and the mini-implant to deliver a continuous force of 100cN (Fig. 1). The base wire is engaged in the mini-implant slot and held with a stainless steel ligature, which is left slightly loose to reduce friction during sliding. Because of the distance from the center of resistance, a significant distal force and uprighting moment are generated on the molar. The round stainless steel wire inserted in the molar tube allows for rotation; the mini-implant should be loaded with only lateral force, so that the applied and effective force systems are the same. Elasticity of the wire tends to rotate the molar distally, requiring a derotational activation (Fig. 2). 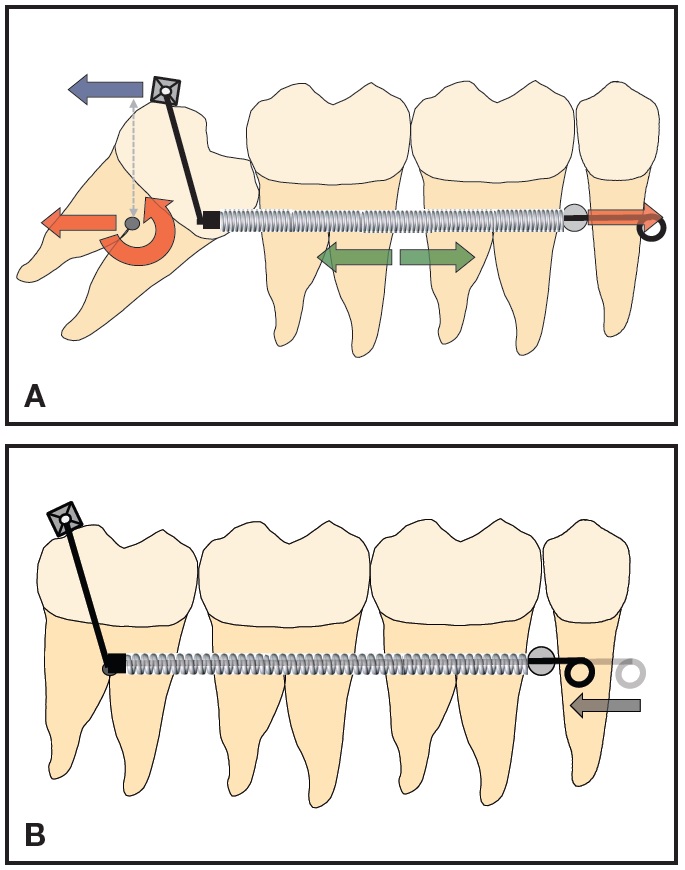 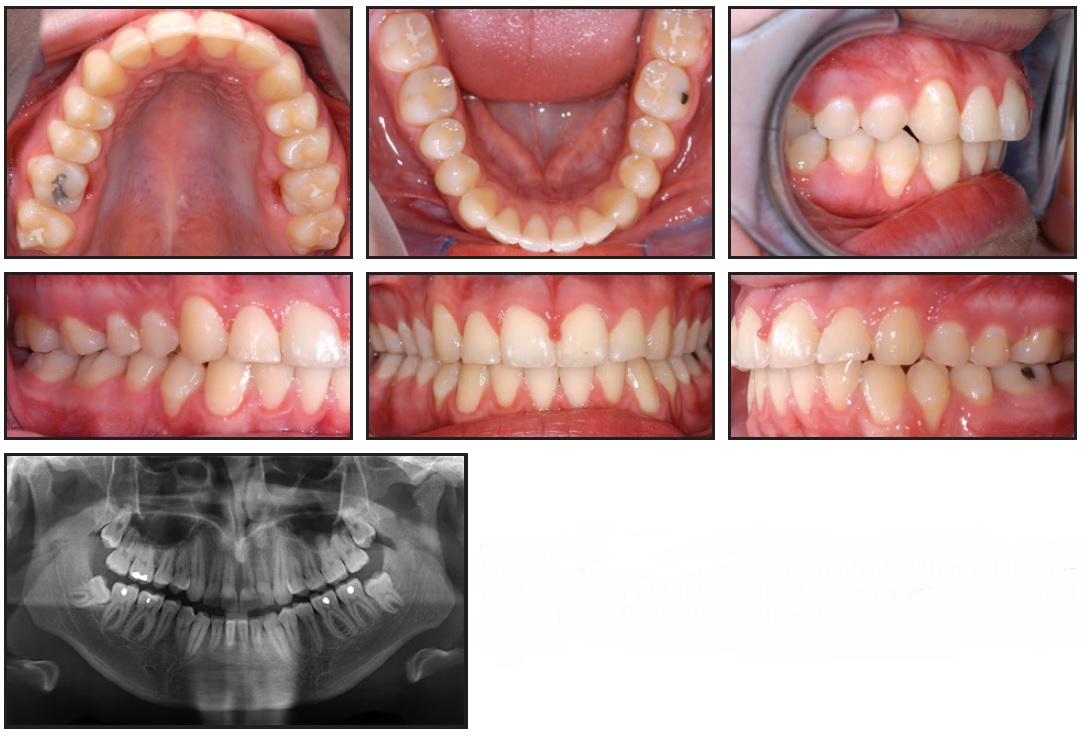 A panoramic x-ray showed that all third molars were present, with the lower right one mesially impacted. A mini-implant was inserted between the roots of the lower right premolars, and, after minimal exposure of the distal cusps, a tube was bonded. The uprighting mechanics described above were applied, delivering a counterclockwise moment to the third molar (Fig. 4). 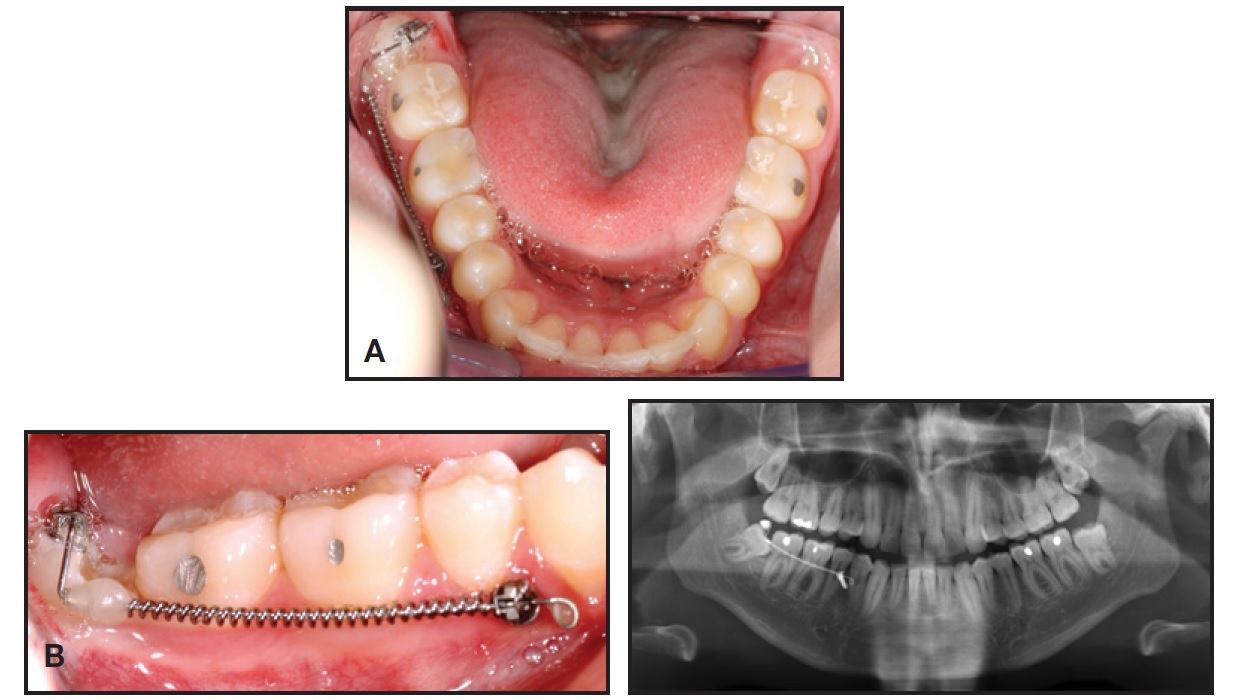 Fig. 4 Case 1. A. Activation of uprighting mechanics. B. One month later.

Six months later, with the third molar fully upright, the appliance was removed (Fig. 5). The lower right third molar was in stable occlusion with its antagonist, but the upper third molars had not yet erupted. Contrary to expectations, the lower left third molar remained in its original vertical position and may require active alignment.

An 18-year-old female had previously undergone orthodontic treatment involving the extraction of four first premolars due to crowding in both arches (Fig. 6). 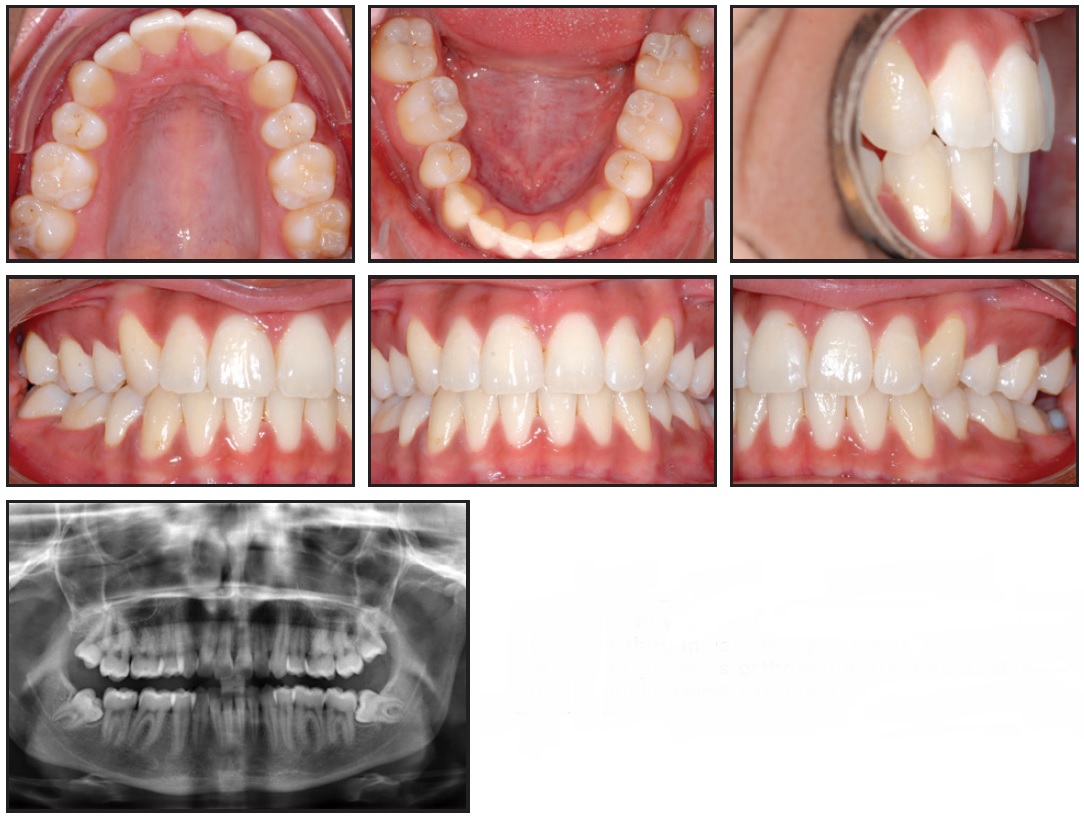 Her treatment had finished two years and 10 months earlier. At the time of our evaluation, the patient's upper third molars had erupted, but the lower third molars were severely mesially impacted. Considering the available space, mini-implants were inserted between the roots of the first molar and second premolar on the right and the canine and lateral incisor on the left. Again, the mechanics described above were implemented (Fig. 7).

Fig. 7 Case 2. A. Activation of uprighting mechanics. B. One month later.

After two years of treatment, both lower molars were upright, and a stable occlusal relationship to the upper molars was achieved (Fig. 8). 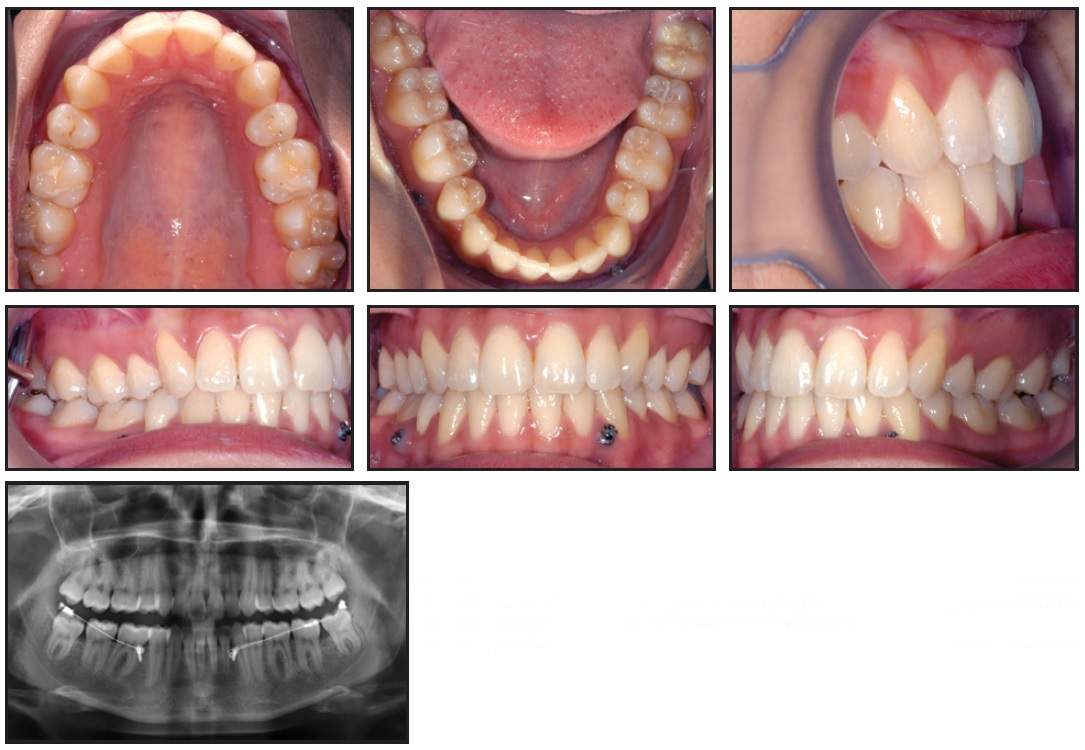 Since the third molars have not erupted by the end of orthodontic treatment in most patients, the use of sectional, skeletally borne treatment mechanics offers an excellent method for uprighting mesially impacted third molars. Fixed appliances do not have to be kept in place in anticipation of molar eruption, reducing overall treatment time. An adult patient who has been referred by the general dentist only for uprighting of an impacted molar can be treated with sectional mechanics and orthodontic mini-implants, rather than full fixed appliances.

With direct anchorage from the mini-implants, there is no risk of anchorage loss or undesired tooth movement. Extraction and associated risks such as nerve damage, TMD, and improper wound healing are avoided.

Because the uprighting moment is generated by eccentric force application on the molar, the moment becomes larger as the distance between the point of force application and the molar's center of resistance increases (Fig. 1). Therefore, the distal cusps are a more effective application point than the buccal crown surface. This is particularly important in cases with severely mesially tipped or nearly horizontal molars, where the distance from the middle of the buccal crown surface to the center of resistance is shorter and the uprighting moment is consequently reduced. In such a situation, the distal force vector would be more pronounced than the uprighting moment, so that the tooth would tend to distalize rather than rotate. In addition to these mechanical advantages, the distal cusps are often more accessible without surgical exposure.

The approach shown here loads the mini-implant with a lateral force. Previously described force systems achieve molar uprighting by generating an axial moment on the mini-implant,12 but axial loading is associated with higher rates of mini-implant failure.13 An axial direction of force could actually be favorable in a case with residual space mesial to the tipped molar due to loss of the adjacent molar, where a mini-implant of larger diameter could be inserted vertically into the alveolar process.14

Fig. 4 Case 1. A. Activation of uprighting mechanics. B. One month later.

Fig. 7 Case 2. A. Activation of uprighting mechanics. B. One month later.