Generating an Ideal Virtual Setup with Three-Dimensional Crowns and Roots

The goal of orthodontic treatment is to move teeth from malocclusion to a functional, esthetic, and stable ideal occlusion in which all dental crowns and roots are in the correct three-dimensional positions. Mesiodistal, labiolingual, and occlusogingival positions and axial rotations can be determined solely from the crowns of the teeth, but mesiodistal angulations and faciolingual inclinations may be better assessed by viewing both the crowns and roots.1-4 Although most of the focus in orthodontic treatment is on crown positions as determinants of esthetic appearance and occlusal contacts, improper root positions may increase the risk of relapse, periodontal damage, and undesirable tooth movements under occlusal loads.5-7

To check root alignment, 67% and 80% of U.S. orthodontists take progress and post-treatment panoramic x-rays, respectively.8 Studies have shown, however, that panoramic x-rays are imprecise as a means of identifying problems with tooth angulation.9-12 Recent advances in 3D technology and software have provided diagnostic tools for more accurate measurement of mesiodistal angulation and faciolingual inclination.13,14 Still, many of the digital systems used to fabricate customized orthodontic appliances - including Invisalign*, Incognito**, and Insignia***15-18 - do not display the roots in their virtual setups.

A recently reported technique has the capability of monitoring root positions at any stage of orthodontic treatment by combining a cone-beam computed tomography (CBCT) scan with either an intraoral or extraoral digital scan of the crowns.19,20 The present article describes the use of this process to evaluate and modify crown and root positions for construction of an ideal 3D setup.

The procedure is illustrated in a 32-year-old female who presented with a skeletal and dental Class I malocclusion (Fig. 1).

Casts were poured with orthodontic stone from polyvinyl siloxane impressions. After a pretreatment CBCT was performed with a Sironas Galileos Comfort† 3D scanner, the images were reconstructed with a .25mm slice thickness and exported as Digital Imaging and Communications in Medicine (DICOM) files.21

The DICOM files were imported into Mimics 17.0‡ software. Threshold segmentation of all three views (sagittal, coronal, and transverse) was performed on each individual tooth to create 3D virtual models. An initial threshold of 2.224-4.095 gray levels was manually adjusted to minimize the surrounding bone while accurately capturing all the teeth. After region growing, cropping, and 3D mask editing were performed with the Mimics 17.0 software, smoothing and wrapping functions were used to optimize the virtual models. The CBCT teeth were imported into 3-matic 9.0‡ software, which has the capability to perform surface-based superimposition of 3D models.

The physical casts were sectioned and rebuilt into an initial, tentative setup, which was then scanned with an Ortho Insight†† extraoral laser scanner, exported as a stereolithography (STL) file, and imported into the 3-matic 9.0 program. The 3D position of the roots was generated by superimposing the crown of each individually segmented CBCT tooth onto the corresponding crown of the laser-scanned initial setup (Fig. 2). 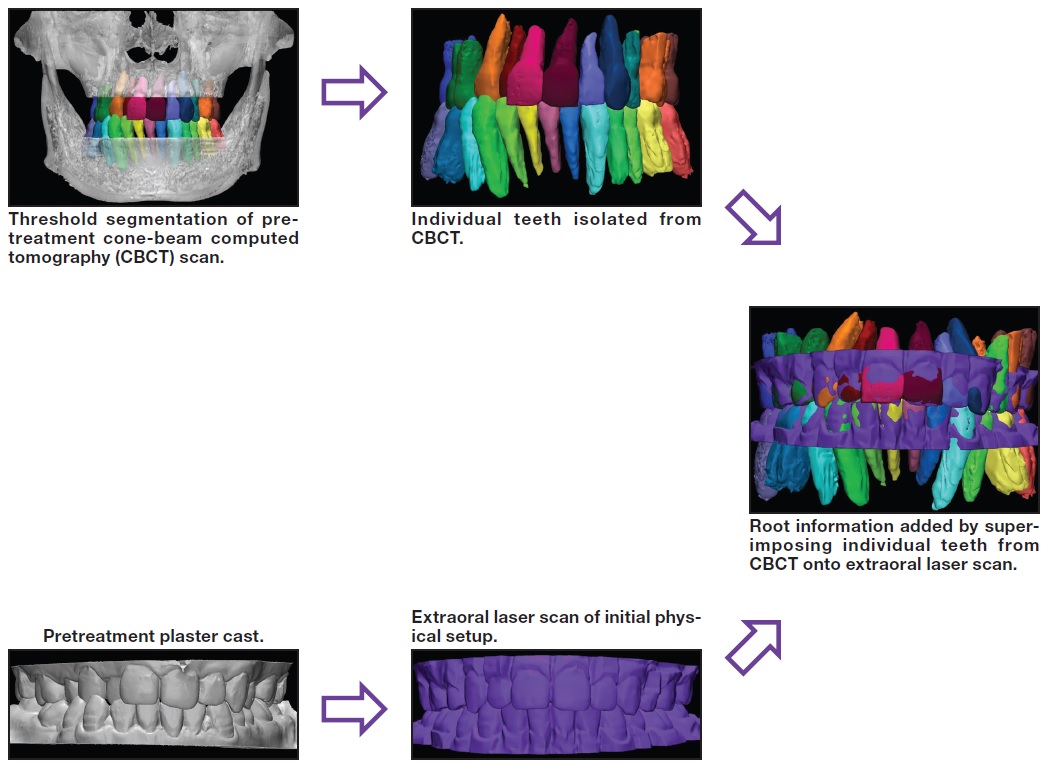 A crude superimposition was performed by selecting and superimposing three points that were in roughly the same anatomical positions on the CBCT and laser-scanned crowns, thus bringing the virtual models relatively close to the desired relationship.

Fine, global registration was performed with an iterative closest-point algorithm that used 100% of the points making up the 3D models. Since each CBCT and laser-scanned crown is built from more than 5,000 points, this algorithm yields the minimum displacement between points. Color-displacement maps were created to quantitatively confirm the accuracy of the superimposition by measuring the displacement between the closest points of the CBCT and laser-scanned crowns. The superimposition was considered accurate when the points making up the crowns had an average distance error of less than .1mm.19,20

After appropriate alterations to the physical setup were made, a new extraoral scan and crown superimposition were performed to create a final setup (Fig. 4), which was later used for the fabrication of customized orthodontic appliances.

The ABO deducts points from submitted cases if adjacent dental roots are not parallel with or in contact with each other, indicating that proper root positions are a priority of orthodontic treatment. The method described here adds roots from a CBCT scan by superimposing the crowns of individual teeth onto a digital scan of an ideal crown setup. CBCT has been found to display dentofacial structures in a 1:1 ratio - precise enough that any distortions are clinically insignificant.9,22

Even if the final setup is ultimately dictated by the crown positions, this procedure will help identify errors in crown angulation and inclination that might have been missed during initial physical inspection. As our case demonstrates, the ability to visualize the roots allows the clinician to improve the ideal 3D setup. Of course, the orthodontist may decide to leave the roots uncorrected in certain patients to accommodate crown positions, especially in cases involving root dilacerations or abnormal crown shapes.

Although our demonstration involved an extraoral laser scan of a physical setup, we believe the procedure will work even better on virtual setups because the evaluation, modification, and confirmation of root position can be accomplished instantaneously, without the need for additional extraoral scans. One disadvantage is that a substantial amount of time and effort is required for the threshold segmentation of each tooth from the complex craniofacial bony structures and for the superimposition of individual crowns. Further advances in imaging technology and processing software may make this process much faster and easier to perform.