Excessive gingival display is an unattractive smile characteristic with multiple etiologies. Vertical maxillary excess, supraeruption of the maxillary incisors, and shortness or hypermobility of the upper lip are some of the most common factors involved.1,2 Vertical maxillary excess is characterized by excessive posterior and anterior dentoalveolar height and is often associated with excessive lower facial height and a wide interlabial gap. From a sagittal view, such a patient may also have a convex profile due to apparent downward and backward mandibular rotation.3

A patient with vertical maxillary excess exhibiting these facial characteristics can benefit greatly from a maxillary impaction Le Fort I osteotomy.3,4 This procedure not only reduces the gingival display when smiling and the incisor display at rest, but also promotes an upward and forward rotation of the mandible that reduces the lower facial height and the interlabial gap, often resulting in a more orthognathic profile. Because orthognathic surgery is associated with considerable costs and risks, however, alternative treatment options are often explored, including orthodontic intrusion of the maxillary incisors.

The maxillary incisors can be predictably intruded about 2mm with orthodontic appliances.5 Any further correction is difficult to achieve or may generate esthetic problems, such as a reverse smile architecture due to the discrepancy between the posterior occlusal planes and the anterior incisal plane (Fig. 1). To increase the degree of maxillary incisor intrusion, the posterior occlusal plane must be altered through a leveled or canted intrusion. Unfortunately, superior displacement of the maxillary occlusal plane is not possible in an adult patient without surgery, unless adjuncts such as skeletal anchorage are used.6-10

This article describes a patient with excessive gingival display in whom the incisors were intruded 5mm at the incisal level, with a significant esthetic effect comparable to that of a Le Fort I maxillary impaction. Anchorage from endosseous dental implants in the posterior maxillary segments was used to achieve this significant incisor intrusion and alter the cant of the occlusal plane. 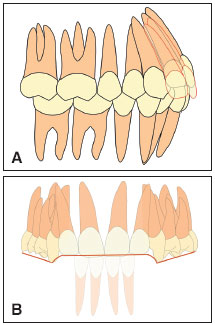 Fig. 1 A. Reverse smile architecture from maxillary incisor intrusion that produced vertical discrepancy between posterior occlusal planes and anterior incisal plane. B. Problem is most apparent from front view. 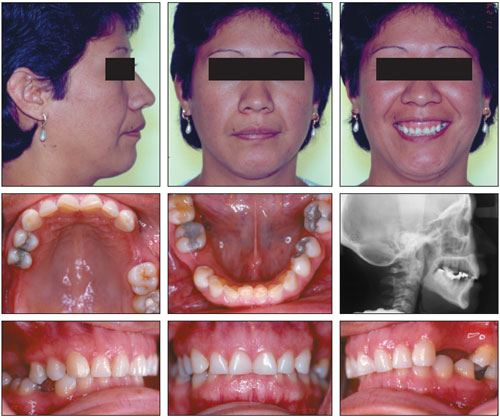 The patient's facial skeletal and soft-tissue profiles were convex due to mild maxillary prognathism. She had an increased lower facial height with a vertical maxillary excess that was evident in smiling, with a display of approximately 8mm of gingiva on smiling and 4mm of the maxillary incisors at rest. The maxillary and mandibular incisors were supraerupted and upright (Table 1).

The canine relationship was Class I on the right side and edge-to-edge on the left; the molar relationship was indeterminate due to the numerous missing molars. The patient also had an impinging anterior deep bite.

The general treatment objectives were to reduce the anterior deep bite and excessive gingival display through intrusion of the maxillary incisors, achieve a Class I canine relationship, and create adequate space for a fixed prosthesis. The specific objectives were to reduce the skeletal and soft-tissue convexity through intrusion of the maxillary molars and resultant mandibular autorotation, which would also reduce the lower facial height and the interlabial gap. The maxillary incisors were to be intruded 5mm and the lower incisors maintained vertically, correcting the overbite and maximizing the reduction of the gingival display. The molar intrusion would also tend to deepen the anterior overbite, preventing the development of an anterior open bite despite the significant incisor intrusion. 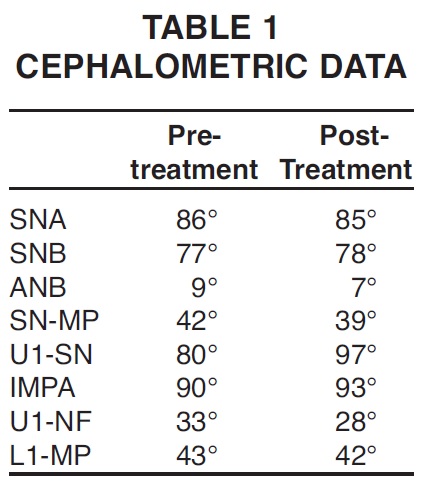 The plan was to maintain the maxillary incisors in the anteroposterior dimension at the incisal level, but to move the roots lingually. The mandibular incisors would be tipped 4mm labially, and the maxillary left molars protracted 3mm. Endosseous implants were to be placed in the edentulous site of the maxillary left first premolar and distal to the maxillary right second premolar. The mandibular left second molar would be tipped back 3mm, and a bridge would be placed to restore the first molar edentulous site. Finally, the mandibular right first molar would be maintained, and a bridge would be made at the end of treatment to restore the missing second premolar (Fig. 3).

The patient was first referred for permanent restoration of the occlusal surface of the maxillary left second molar, as well as extraction of the supraerupted mandibular right second molar. A Visualized Treatment Objective and an occlusogram were used to determine the proper location of the implants and transfer them to the initial cast (Fig. 4). After the appropriate sites were identified, the bone was evaluated to ensure adequate height and width of the alveolar bone. Two 3i* maxillary endosseous dental implants were placed, one in the right first molar area and the other in the edentulous left first premolar site.

Fig. 4 Endosseous dental implant placement plan, based on transfer of information from occlusogram to cast for stent fabrication and then to clinical setting. Implants were placed before orthodontic appliances.

An .017" x .025" nickel titanium Connecticut Intrusion Arch** was attached from maxillary first molar to first molar to deliver a continuous intrusive force to the incisors, which were ligated as a unit with an .017" x .025" stainless steel wire segment. The tipback and extrusive force on the molars were counteracted by the implants, directly on the right side and indirectly on the left side (Fig. 5), so that the intrusive force was the only component of the force system producing tooth movement. A segment was added to connect the maxillary left implant to the first molar, from which the intrusion arch was extended. Because the bracket on the implant was more gingival, this assembly helped intrude the maxillary first molar and reduce the lower facial height. In the lower arch, a heavy continuous .017" x .025" stainless steel wire was placed from the mandibular right first molar to the left second molar. An uprighting spring made from .017" x .025" CNA Beta III wire** was placed on the second molar to tip the molar back (Fig. 6).

The significant maxillary incisor intrusion created a reverse smile architecture (Fig. 7), necessitating intrusion of the canines and premolars on the right side. 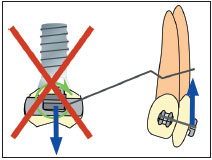 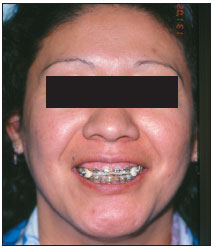 The canines were intruded about 3mm with a cantilever on the right side and a V-bend on the left side from the maxillary left premolar implant (Fig. 8). The right first and second premolars were intruded with short cantilevers extended from the first molar implant. Once the anterior and posterior intrusion was completed, continuous archwires were inserted in both arches. A mushroom loop was placed to close a space that had opened distal to the maxillary left lateral incisor.

After 42 months of treatment, appliances were removed, and the patient was referred to the restorative dentist for placement of bridges in the mandibular posterior regions and crowns on the maxillary endosseous implants. Crown-lengthening gingivectomies were recommended for the anterior teeth to reduce the residual gingival display, along with composite veneers or crowns to restore the worn incisal edges. The patient was satisfied enough with the anterior esthetics that she decided to limit her prosthodontic treatment to the posterior occlusal rehabilitation (Fig. 9). 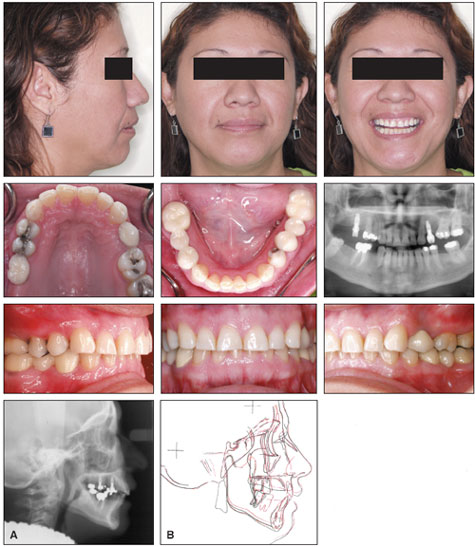 Fig. 9 A. Patient after 42 months of treatment, showing significant reduction of excessive gingival display and superior autorotation of mandible. Prosthetic restorations were fabricated for endosseous dental implants and edentulous areas. B. Superimposition of cephalometric tracings before and after treatment.

Anchorage from conventional endosseous dental implants can be used not only to restore edentulous areas, but also to achieve significant anterior intrusion, with esthetic results comparable to those of surgical maxillary impaction. Although significant root resorption might be expected with this amount of intrusion, the final radiographs revealed only mild resorption, consistent with conventional orthodontic mechanics (Fig. 9).

A significant mechanical advantage is obtained with lever arms that generate intrusive forces anterior to the buccal segments. This method provides a versatile way to deliver the desired force vectors from remote areas of the mouth. Significant tooth movement can be achieved when intruding the incisors from endosseous molar implants, because the force activation is not dissipated by the tipback side effect of the anchorage unit.

Fig. 1 A. Reverse smile architecture from maxillary incisor intrusion that produced vertical discrepancy between posterior occlusal planes and anterior incisal plane. B. Problem is most apparent from front view.

Fig. 4 Endosseous dental implant placement plan, based on transfer of information from occlusogram to cast for stent fabrication and then to clinical setting. Implants were placed before orthodontic appliances.

Fig. 9 A. Patient after 42 months of treatment, showing significant reduction of excessive gingival display and superior autorotation of mandible. Prosthetic restorations were fabricated for endosseous dental implants and edentulous areas. B. Superimposition of cephalometric tracings before and after treatment.